In this horror drama, a group of very different people come together to investigate recent crimes that have an occult aspect to them: a psychic born into a shaman family, a cynical Catholic priest with exorcising abilities, and a detective who at first doesn't believe in the occult.

In this horror drama, a group of very different people come together to investigate recent crimes that have an occult aspect to them: a psychic born into a shaman family, a cynical Catholic priest with exorcising abilities, and a detective who at first doesn't believe in the occult. 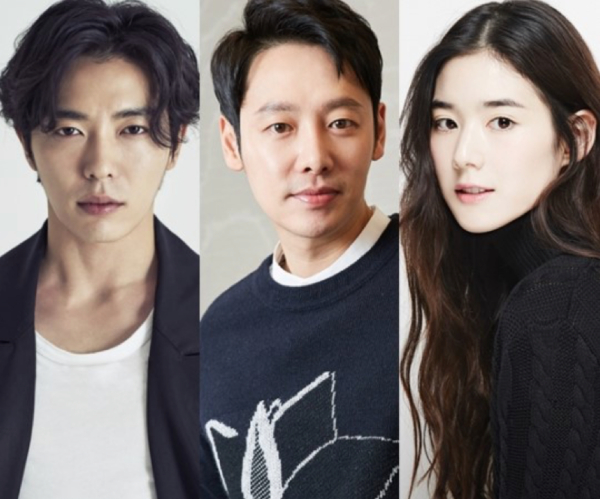 Ack, I think I’m going to have to watch this one from under my covers. OCN has a supernatural procedural in the works titled Hand: The Guest for this fall, and it sounds appropriately creepy as heck, promising lots of exorcisms and ghost possession. The main cast has also been confirmed, with Jung Eun-chae (Return), Kim Jae-wook (Temperature of Love), and Kim Dong-wook (With the Gods) set to star.

Hand: The Guest will follow a somewhat unusual gang, made up of a priest, a psychic, and a detective. Kim Jae-wook will be taking on the priest’s role, and the character sounds like one that’s right up the actor’s alley. Cynical and cold, this priest specializes in exorcisms and was chosen to do so because of his strong determination and will against evil. He may play for the good guys, but that doesn’t make him all that friendly, and he prefers to go at it alone and is reluctant to get involved in other people’s lives.

Kim Dong-wook plays another supernaturally-gifted character, who is descended from a line of shamans. He has both shamanistic and psychic abilities, which are certainly helpful in his quest to seek out those who are possessed and chase out the ghosts from their human hosts. Naturally, personality-wise, he’s diametrically opposed to Kim Jae-wook’s character, with a tendency to make decisions on the fly and being a generally free spirit. His easygoing attitude masks a deep darkness, however, which sounds a little ominous in a show like this.

And last but certainly not least is Jung Eun-chae’s hard-hitting detective, whose energy and dedication to her cases exposes her to physical danger that even makes veteran male detectives flinch. Her character description is kind of funny to read, because the phrase “too much” pops up a lot: She supposedly has too much passion, too much focus, and acts too much like an ajusshi. While she doesn’t initially believe in the supernatural, through her association with the two male leads, she will start to fear the unknown and get more involved with the priest and the psychic. And fight supernaturally-related crime, I presume.

Okay, so I have to admit, I am slightly worried about the PD-writer team behind Hand: The Guest, and I’m sure I won’t be the only one with reservations. I personally have no problem with the director, PD Kim Hong-sun, whose credits include Liar Game, Voice, and Black, and I think he’ll do a great job with this show, especially with its dark and supernatural elements. I mean, I will be absolutely terrified while watching this, but that’s the point. I’m much more wary of the writer duo Seo Jae-won and Kwon So-ra, who both also jointly penned Entourage. I didn’t watch the tvN show, but the general consensus on DB seemed to be that the show wasn’t exactly anything to write home about. Let’s just hope that they do a better job this time around for OCN, since I’ll have to check out the show given the mini-Coffee Prince reunion happening in the main cast.

I'm like YES to the actors and producer, and NO to the writer. You know what, if the writers choose to under-develop any of the leads like they did in Entourage I'm gonna be so mad they need good scripts to elevate their reputation (which they really deserve from past shows). The writer is going to be so important in a procedural because you have to write so many different interesting cases that remain relevant to the characters and yet push the plot forward, which is a lot tougher (even Life on Mars had some trouble with its cases).

I guess the under-developed tag will go to jung eun chae's character. I am sure she will be a genuine, passionate and courageous character but not the one who saves the day. That will be the guys. Of course, I will be more than happy if they give equal footing to all three.

who both also jointly penned Entourage
where is that Michael Scott "GOD NO" .gif when you need it

I know nothing about the writer but the combo Kim Dong-Wook and Kim Jae-Wook plus PD-nim make me won't ask for more. Well I'll just give it a shot for two episodes and decide later.

was about to say mini coffee prince reunion.

Thank you for this update on HAND: THE GUEST, tipsymocha. The title sounds kind of clunky. I can't get Thing from THE ADDAMS FAMILY out of my head.

VOICE and BLACK were both well done (well, the latter was up until the penultimate episode). In addition to the mini-COFFEE PRINCE reunion between Kim Jae-wook and Kim Dong-wook (Manseh!!), there's a VOICE reunion between PD Kim Hong-sun and KJW, who played Mo Tae-goo, one of the most memorable serial killers in recent Kdramas.

The main cast sounds like the set-up for a shaggy dog story: A priest, a baksu, and a detective walk into an exorcism...

The prospect of a good dose of Mugyo in combination with exorcism sounds interesting. Will we encounter some Grim Reapers, too? ;-)

Somehow, I keep adding a word and reading it as HAND: The Guest Towel. Sorry.

Welp, that cannot be unseen and will now be fixed in my my mind also.

Third time's the charm. These permutations are killing me. ;-)

LOL!! In BLACK, the Hand Towel was fine indeed, and I, for one, have no intention of unseeing him. ;-)

HAND THE GUEST A TOWEL?

And now I'm thinking, "Guest: The had towel."
BEGONE!

ROFLMAO!!! You're slaying me, @bbstl! How the heck did I not see that one coming?!

And to think I had somehow managed to refrain from mentioning Song Seung-heon's terrific dual performance as Grim Reaper #444 / Detective Han Moo-gang...

Truth be told, even with my changed title, my visual all along was your Addams Family Thing hand upright and actually holding a hand towel. Don't you all start, that's a lower case hand towel 😑

If they can pull off a show with a vibe like ARANG AND THE MAGISTRATE and MIRROR OF THE WITCH, plus the Mugyo elements from the latter, REBEL, and OH HAE-YOUNG AGAIN, I'll be happy.

I'm looking forward to seeing Kim Dong-wook again. It's been too long.

I have yet seen any that you mention, except Arang and The Magistrate which I dropped after 10 episodes, it's too long... Yes, I'm excited to see Kim Dong wook, the last time I saw him was Along with The Gods. Wow, he's excellent in it.

I'm cheering for the male underdogs of kdramaworld. Hope the writers don't ruin it. :S Although was entourage anything that great to begin with?

My thoughts exactly. The source material wasn't that great to begin with re Entourage. Though from DB comments, it's pretty clear the Korean adaptation failed to improve upon it. In any case, I'm hoping they'll do a better job with an original script of their own.

If anything, it wasn't my kind of show haha. I would dare say that Korean writers are better at writing original stories than the American ones. :P At least in writing one season shows.

(picture of Kim Jae Wook pops up on db) Yes, yes, yes! More of KJW on the screen, please! ♥

Love to see Jung Eun-chae in another drama. I knew of her from Return and has been impressed by the natural elegance and femininity that she exudes. I'm not sure about her character in this coming drama but in Return she convinced me of a lady that is soft and gentle on the outside but tough and persistent on the inside. I have no idea about other actors or the production team but will give the first episode a try.

Sounds good, but. Another Wednesday-Thursday show? Six shows to follow? - that will be my record.

Kim Jae Wook + OCN!!😍😍
The role perfectly suits him. Looking forward for this drama. He was at his best role In Voice.

Gosh, I want to see Kim Jae Wook on my screen again, especially in a thriller. He was great in Voice.

But these writers… I couldn’t finish Entourage, but maybe the original story wasn’t good to begin with. Hoping this new, original drama will be better and it’s not too scary. >.<;

Kim Jae-wook in a lead role! We can't miss it! Good thing the writing wouldn't matter much because I'll be squinting the whole time...

I'm loving the trio, the premise and I have so much hope for this show !!!! Please be great !!!

I get the feeling I'll be very scared while watching this drama but I still want to watch it. There must be something wrong with me.