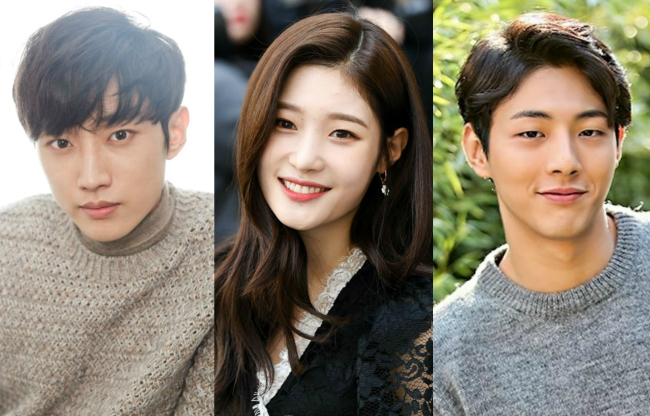 Ahh, the trope that will never die in dramaland: the first love. Don’t get me wrong, I love a good youth romance centered around that near-mythical first love, so I’m excited to see how Netflix fares with its latest foray into Korean dramas. Tentatively titled Because This Is My First Love, the online service has secured Jinyoung (Moonlight Drawn By Clouds), Ji-soo (Bad Guys: City of Evil), and Jung Chae-yeon (Reunited Worlds) to star as a trio of twenty-somethings navigating first loves and friendships.

The plot sounds pretty straightforward: Because This Is My First Love will portray a pair of friends who are strictly platonic, or at least in the beginning. They attend the same university, and the girl begins to develop feelings for the boy’s best friend. Earlier reports indicate that Ji-soo will play the friend in the middle of his two best friends’ romance, which kills me a little inside. He’s so good at being the wounded-puppy second lead, but I desperately want him to end up with the girl someday. Someday soon, preferably.

Jinyoung’s character is the prickly, cold type, and a complete model student. He rarely shows how he actually feels, but will slowly open his eyes to first love. And, of course, we have Jung Chae-yeon, whose character will receive both boys’ affection. Based on Moonlight Drawn By Clouds and To Jenny, they both seemed to have a natural and charming presence onscreen, so I’m looking forward to them joining Ji-soo in this campus romance.

Writer Kim Min-seo of My Black Minidress will be penning the script, while writer Jung Hyun-jung, whose credits include Discovery of Love, the I Need Romance series, and Because It’s My First Time (another youth-centered romance), will be in the creator role. PD Oh Jin-seo, whose genre-hopping credits include Yong-pal, My Sassy Girl, and Modern Farmer, will be directing.

Because This Is My First Love, which is being planned for a 8-episode run, is slated to begin production this year for a 2019 release on Netflix.

So will Ji Soo finally get the girl or what?

I feel like it's a revamp of the creator's other youth-centered drama (very similar title O.o) and earlier reports gave the characters the exact same names (maybe they've changed it by now), if you check that one out, you might get an idea

I checked that drama before. Now that I think about it, the plot looks similar as well as the title! Thank you for your reply 🤣

PS. My first comment was actually meant to be a joke since both male leads have always been second leads who never gets the girl especially Ji Soo haha

We're all very invested in Ji Soo getting the girl. It's about time, please! 😤

Honestly its about time....

Korea, get serious. Nobody believes JiSoo as a guy who doesn't get the girl anymore. Really, pretty much no one believes him as a college kid anymore, but we're willing to indulge you on that. If he's going to be theguywhodoesntgetherAGAIN you better write a super hot 2nd girl who shows up that he does get, and easily 🙄 smh

A peripheral character that watches it all go down and is like, Seriously....if you dont want him..."

She's peripheral but turns out to have an amazing life going on just outside the main characters' orbit and then, boom! 😍

I vote for the easily part. He doesn't deserve all the angst he keeps having in every single drama as the 2nd lead

If I could upvote this a thousand times I would. How can he not get the girl??

I won’t watch another drama where he WON’T get a girl again. This makes me really angry 😤

Honestly, Jisoo shouldn't even go after the main lead. Chae-young will try to play it as if Jisoo AND Jinyoung are both into her, but in reality, Jisoo has been with an outstandingly amazing, incredibly sexy girl who actually ends up becoming the main lead in some insane plot twist, and then Jisoo doesn't even need to try to get the girl anymore he already has her . Oh and also, Jisoo was just posing as a college kid, he's actually some super successful CEO of a startup and everybody has just been tricked.

But also, Jinyoung not getting the girl and then dying in Moonlight Drawn by the Clouds was so sad. This drama will break my heart either way. sigh

😈 yes, THAT! I'm gonna wait for that to turn out to be the plot the whole time. I may as well choose how I want the show to disappoint me, thank you suk!

Ji Soo is only 25 and there are lots and lots of college kids 25 and older. True, most are a little younger, but 25 is still a good age for a college student and IMO Ji Soo fits right in with college kids. Maybe it is because Ji Soo has played much older roles that we think of him as being too old for college... but he isn't.

College students come in all ages. Korean men who are required to serve in the military, can easily be students at that age as they often interrupt their schooling so they don't have to interrupt their career later.

Never mind Ji Soo, who believes Jinyoung as a college student? But dramas are forever casting 28-year-olds as even high schoolers.

Oh, go ahead and break my heart again, don’t you?

*Phantom of the Opera voice* For either way you choose, you cannot win~

Well, I adore drama specials and this cast, so

Pretty pretty please with ramyeon-on-a-lid-on-top - may the boys’ bromance stay strong throughout, and may there be many many hugs and NO gummy bears or swords involved.

Made me laugh!!! Ban on gummy bears and swords for this show... and you're right, either choice will break my heart.

😂 I’m already going to be hurt and crying, there’s no need for be!

So Jisoo isn’t getting the girl again. Well that’s just sad. I wonder how long he’s going to be typecast as the guy who never gets the girl. I really like the fresh faces for this show and the premise sounds cute. I liked ‘because it’s my first time’ with its friendships, if it’s similar I’ll happily watch.

Ah is this the first time Jinyoung will finally get the girl??

Jinyoung's character got Chae soobin's character in the KBS drama special if we were a season.
That counts as the first time isn't it?

To me, Chae Soo Bin and Jinyoung never got together. She liked Jang Dong Yoon but felt guilty her heart wavered for Jinyoung after finding out her father cheated on her mother, so she wouldn't let herself accept Jang Dong Yoon.

Yeah it could be seen like that. I guess I have to rewatch again to catch what I couldn't the first time.

I've always found Ji Soo's acting super still and I could never really get absorbed into his characters, but yes, the guy deserves the girl once in a while XD
..... BUT SO DOES JINYOUNG!!! Seriously, first it was "Moonlight Drawn By Clouds" (my heart will forever break for him), and then there was the KBS Drama Special "If We Were A Season" with Chae Soo Bin and Jang Dong Yoon, which, **SPOILER ALERT!!! Jinyoung also didn't get the girl** T.....T Like, if you're going to cast Chae Soo Bin and Jinyoung together again, KBS, at least give the guy a break and cast him as the guy who gets the girl XD

Give our guys a break, why can't you, dramaland???

How I wish they cast Chae Soo Bin and let ler be with Jinyoung. They deserve to be together. Let Ji Soo have the main actress.. Problem solved!!

Yes. To the point where he did a cameo in WFKBJ as "guy who doesn't get the girl" and it was hilarious.

Let the first love trope be of Ji-soo and Jinyoung so neither will get the girl because they have found love in each other!

Netflix, take a chance and give Dramaland the diversity it badly needs!

Or go the bromance route and air drop Baek-a from Goryeo for a brotherly reunion with Wang Jung, and scare up Kim Byung-yeon and Seja Lee Young to keep Kim Yoon-sung company. Then can go hang out at the Damiwon. Last one in the pool is a rotten egg...

Ji-soo will play the friend in the middle of his two best friends’ romance
Why must I continue to be punished in this way?

Noooo. Maybe we'll get a good bromance though?

What does “creator role” usually entail? It’s my first time seeing the term used in relation to a movie/TV show script.

So Ji-Soo won't get the girl even now? *Drama gods when does our poor puppy will get the girl?*
Finally Jinyoung will get the girl this time.😂
I love the cast.😍 Though the premise is damn common but still I'm interested.
Jung Chae-Yeon totally stole my heart in the messed up Reunited Worlds.

If Jisoo ever got the girl, the spacetime continuum would crack open and the universe would be destroyed.

Or maybe it would just permit us all to time travel.

OMG as much as I feel happy for Jinyoung (his group disbanded) I just want Ji Soo to be the lead 😣😣😣😣. He can't seem to catch a break. Also I hear Jinyoung is a good producer also. I really want the girl to act well. Haven't watched anything with her in it so I can't say much

How about Because Its Our First Time JiSoo Got the Girl

Now THAT should be the theme from now on.

I'm curious about the choice of actors. They're not bad but there are better ones for me.

All that I can think of is how will we shorten it without confusing it with BTIMFL (Because this is my first life)? 😆

There are articles that have Age of Youth S2's Ji Woo also set to be in this drama. Can dramabean look into this and give a bit more information on the plot including her character.

Wait? Will he get the lead girl? I can't deal watching Jisoo not get the girl again. 😕

Another Jung Hyun-jun's work? Yeay~ Does it means we could get 2 of this writer's work in 2019? This drama and Romance is a Bonus Book (Lee Jong Seok and Lee Na Young)? After 2 years of absent since 2016 Five Children, this writer come with a bomb~~

It sounds formulaic- which can still be fun if the writing is good enough and the actors have chemistry. The writers must have a lot of confidence to in effect mimic the title of Because This Life is Our First.

Hmm this should would be a lot more interesting if it's about how Ji Soo gets the boy instead.

When you realize both guys have yet to get the girl!! 😁 😁