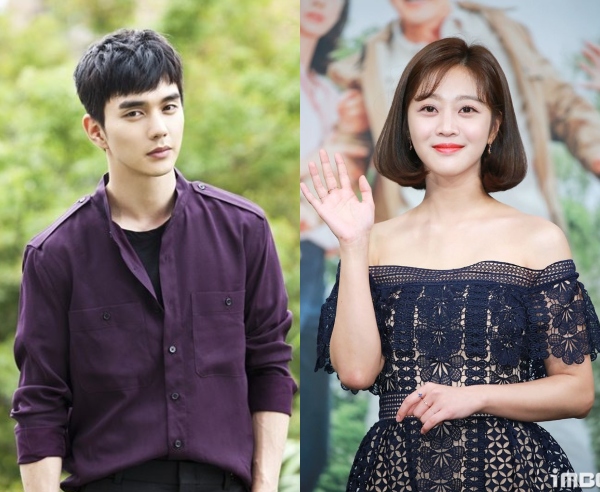 We might be seeing Yoo Seung-ho (I’m Not a Robot) in a school uniform again! SBS has a rom-com drama in its lineup called Revenge Returns, about childhood sweethearts who became enemies returning to the place that started it all: high school.

Yoo Seung-ho plays the main character Bok-soo (homophone of revenge) who fell in love with the perfect model student and class president, played by Jo Boa (Temperature of Love), only to have his heart ripped out and crushed. Yoo Seung-ho is unjustly accused of assault during school and is expelled. He comes to believe that Jo Boa was the one who betrayed him by spreading false rumors. Thus, it becomes his goal in life to get revenge on his first love and his friend who ruined his life.

As for Jo Boa’s character, she’s supposed to be a lovely, nice, smart student who never lost her first-place ranking all throughout school. But after leaving high school, through a series of misfortunes, she fails the teaching certificate examination and is hired only as a temporary teacher at her old school. There, the two characters meet, and a new dynamic forms between the former first loves.

The team at the head of Revenge Returns is a rookie writer named Kim Yoon-young and Greasy Melo director Ham Joon-ho. Revenge Returns will air early December, following the end of the Lee Je-hoon/Chae Soo-bin drama Where Stars Land.

Via IS Plus, iMBC, Xports News

Sounds a little like Nice Guy but without Moon Chae Won's character or the addition of another male lover (goin on the info we have now). I like it, I feel like that's actually a more interesting story.

Either way, I'm here for it. I love Yoo Seung Ho and Jo Boa is delightful.

That's a lovely shot of Yoo Seung Ho. The colour suits him well. He has such a mature vibe, I've never watched him in a drama but saw him in Urban Zakapa's music video, and in a short clip of Remember:Son's War. So it's a bit hard to imagine him as a high schooler, as an adorable puppy( I'm yet to watch I'm Not A Robot)..

The plot description sounds interesting, I like the revenge angle.

I would walk backwards into the fiery pits of hell to see YSH on my screen again but I wouldn't be remotely interested if it was a student/teacher romance. I'm SO happy that's not the case.
(I LOVE YOU BB IM SO PROUD!!! take care of your cats and dress warmly!!!)

I will clear my schedule to watch this. 😁
The mix ups and confusion... I hope that it will be delightfully confusing with chemistry to spare. These 2 are fully capable of stealing my heart. ♥

I... don't like Jo Boa. Perhaps she's just played one too many spoilt brats, so I genuinely hope she changes my mind about her here.

I caught glimpses of her in Tyrant: Monster and even though she was a spoilt brat there as well, I liked her and wasn't annoyed by her, as is usual with bratty side characters.
Btw, I really should watch that show, I liked the besuited second lead( forgotten the actors name, he played Baek In Ho in CITT movie)

Jo Boah stood out in Monster and outshined the female lead in my opinion. She didn't exactly always playing girl crush type of character and loveable characters but she managed to make these characters charming in her own way. I also really loved her in All About My Mom in which she was paired with Choi Tae Joon despite that she was also a spoiled brat.

Same. She has a really bitchy vibe without even trying. It comes off in all her roles, most of the time without a legit reason why she is/needs to be mean (Sweet Stranger and Me).

And what is YSH doing in such a drama? It sounds like a role that only a newbie actor would be offered. Disappointed but will watch for YSH of course. I just hope JB don't shout in that shrill voice too much because this seems like it will have a lot of yelling involved.

@vivanesca ALL ABOARD THE SHIP

Oops wrote a comment before reading yours! Im so excited!

This drama and Where the Stars Land are really hitting my "I Love Them and Always Have" buttons as far as leads go.

I’m so happy I can finally see jo bo ah in a nice girl role. She is pretty good playing unlikeable but sympathetic characters but she totally deserves a female lead role. I’m definitely behind this pairing and I like the premise. I actually thought this was a school show but I guess not.

I'm the opposite! I've never seen her in her famous crazy chaebol roles. >___< It's always a sweet girl in love.

I have only seen her in Shut Up Flower Boy Band. I was startled when I checked her filmography after reading the article.

I keep forgetting not everyone watched Surplus Princess.

Yeah, that is one upside of always binge-watching and never live-watching!

Yayyyyyyy!!!! Yoo Seung-ho is back to dramaland.😍😍
The premise sounds interesting. I'll love to see love-to-hate-to-love premises. 💗
I've only seen Jo Bo-ah in Surplus princess & Sweet stranger and Me and she acted well.
Here October has not yet started and I'm already waiting for November and December. 😂😂😂

Yeah Jo Boa is good in those dramas, I enjoyed watching her.
But I just can’t picture Yoo Seung-Ho with other leading ladies except Kim Sohyun.
But I think the premise sounds

Kim So Hyun and Yoo Seung Ho will always be the perfect pair! They have so much chemistry!

Jo Boah did great in her last drama Goodbye to Goodbye, so yay for her to get her lead role here. It wasn't easy task for her especially when Chae Shi ra was around but she was good in her role. It's also nice to see Yoo Seung ho in romcom again. These two will be an adorable pairing. I'm not sure about this PD though so hopefully the writing is at least decent.

Yes, I thought she did well against Chae Shi-ra in Goodbye to Goodbye. Convincing and relatable performance.

I'm expecting her to get an award for her performance in that drama. She is pretty good and convincing in many of her roles so far, it's too bad some people only remember her in some bitchy roles she did.

Ooohhh!! I love the premise! Yoo Seung Ho back in school uniform ? That s definitely a yes!!!!!!

LOL. shippers need to always link them and to come up with absurd theories. So what if her drama ends ? Does that make them a couple ?

I think it the above commenter was just making an observation, may or not be shipping. It's still a nice thought to make that connection if one is a shipper. We do it with the guys too, so it's not always a romance thing. Sometimes it's bromance and we do sometimes even if they were rivals in their last dramas.
So, not a mean-spirited comment.

The part about her failing her teacher certificate and being hired as a temp teacher at a school where she is reunited with her first love reminds me of Biscuit Teacher Star Candy with Gong Yoo and Gong Hyojin.

News of a new drama with Yoo Seungho never fails to put a smile on my face :)

What are the chances that his drama starts when hers ends, AND it’s on the same broadcaster??? 😁😁😁😁😁😁😁
Can we please get some behind-the-scenes cute food truck-sending shinanigans, a la “Suits” and “Lawless Lawyer”, pretty please??? Seriously, my puppy Hyung Sik and Lee Joon Gi getting flooded by food trucks being sent over by past co-stars and same agency colleagues/friends (almost every week, I might add) is the fluffiest thing ever ❣️❣️❣️❣️❣️❣️

HAHA. Do you think someone like YSH, who has been in the industry for almost 20 years and has managed to be scandal free all these years, would risk that ? He clearly knows this is what shippers want. He rarely sends food trucks to ex-female partners, the only one I can think of his Go Ara. And he is not shipped heavily with her as I know. She was a " safe choice ".

I was always upset that he preferred to take more mature roles and stop acting in student roles since yearsssss ago (while actors much older than him were still acting as high schoolers). I’ve missed him in a school uniform. HWANG BAEKHYUN HI IM TALKIN BOUT YOU.

As a teacher myself, I'm excited to see another drama about teachers! :D