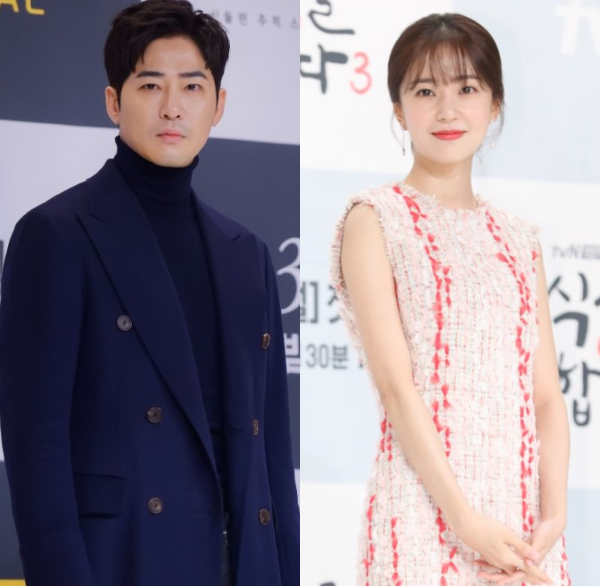 KBS is casting for its upcoming drama Happy to Die, and offers are out to Kang Ji-hwan (Children of a Lesser God) and Baek Jin-hee (Let’s Eat 3) to star in the time-bendy webtoon adaptation. Though the time-bendy aspect might seem like an overused concept at this point, especially with Familiar Wife airing over on tvN, the synopsis sounds quite different in tone, and just fresh enough for those of us with genre-fatigue.

Kang Ji-hwan is up to play a marketing manager at a fried chicken company, who graduated from an elite university at the top of his class. He might have a great resume, but what he’s known for within his company is his terrible personality. He’s verbally abusive with absolutely no filter, and he’s the type of manager everyone has fantasized about killing at least once. Unfortunately for him, his colleagues’ fantasies come to fruition and his character dies at the beginning of the show, only to be caught in a time rift that keeps bringing him back to life.

If she accepts, Baek Jin-hee will play a long-suffering subordinate to Kang Ji-hwan’s tyrannical manager, who gets caught up in her manager’s constant battle for survival. The reports don’t elaborate on whether, or how, she gets stuck in this time rift alongside him, but she plays an important role in stopping Kang Ji-hwan’s character’s death on a daily basis. Which sounds exhausting, but great fun for us as viewers, since we get to witness Kang Ji-hwan’s character painfully transform into a decent human being. Nothing like a good sci-fi comeuppance for everyone’s worst workplace nightmare.

Hopefully, confirmations come in relatively quickly, since Happy to Die is planning to premiere before the year is out. At least the show has its director in PD Lee Eun-jin, whose previous credits include Trot Lovers and Sassy Go Go, the latter of which was pretty cute. It’ll be interesting to see how this director handles what sounds like a darker show like Happy to Die.

KBS has slated Happy to Die to premiere in November in its Wednesday-Thursday slot, following The Ghost Detective.

Love the premise! I'm in.

This is copied from a korean webtoon and in that webtoon every night heroine see her misogynist and sexiest boss die.

Webtoon - Happy if you died.
webtoon artist should sue this writer for stealing his/her work.

It says at the top of the post that this is a webtoon adaptation?

I read it but then the way article mentions both characters feels like scriptwriter just got inspired from the idea and made it his/her own story. In earlier adaptation articles you can see webtoon author name mentioned but here there was none, so i thought scriptwriter is giving the idea of it being his/her own original story.

I suppose the beauty of an adaptation is that you can use the foundations of the work but introduce your own style.

Copyright laws exist even in Korea. I don't think they would be so shameless as to plagiarize so blatantly. Rather, I feel whoever wrote the original article is at fault for not including the original webtoon manhwaga's name.

this sounds interesting. i've never watched a full show with Kang Jin Hwan but i adore Baek Jin Hee. it's funny how she keeps getting shows which are slated after her previous co-stars.

Time rift and I'm in. The last drama I watched of Kang Ji-Hwan was incarnation of money. I had been waiting to watch him again in a drama. ^__^
Baek Jin-hee she's on a drama-spree, first Jugglers, then Let's eat 3 and now Happy to Die.
I liked Sassy Go Go and though Trot lovers was not as good but still I liked it So waiting eagerly for this drama.😍

i am soooooo happy for having all my fav heros back...so ji sub, choi jin hyuk and now kang ji hwan... ok so i am sure my coming months are going to be damn busy in drama watching..... am so happy

now after reading the article..
1. Happy to die and i am happy to see both of my lovely people together
2. Sassy go go i loved, trot lovers i hated... so i still dont know if ill like it or not.
3. Daily dying... thats unique premise so far among all time travel dramas. So i am looking forward to it.
4. Kang Ji Hwan... as pricky jerk manager would be HILARIOUS to watch.. i can imagine him being all OTT doing it. but then the normal nice human being version would be so nice to watch....
waiting for it..

no way . i was just stating the drama title with my referenced of being Happy seeing them together..

The plot reminds me of ancient Egyptian sun god Ra. I wonder if the plot will have motifs of ancient Egyptian mythology. I got such a kick seeing the subtle hints of the moon rabbit legend in 30 but 17 despite the slow plot.
But I guess it's just my fervent imagination which definitely won't come to fruition 😂

I've read this webtoon...Aww man if they get the casting right it's gonna be a fun watch, if i remember correctly; in the webtoon I think that rule was he dies every time someone at work wishes he would including the heroine, so she ends up having to go through some hilarious situations in order to break the time loop like she gets so desperate he becomes genuinely terrified of her, I hope Baek Jin hee accepts she has the kind of spunky energy the role needs

Now I want to go read the webtoon!
The premise seems hilarious- continuously dying because everyone at work hates you.

I hope the first death happens quickly (maybe in the first episode?) because I can't stand watching mean, abusive bosses get away with being a jerk for too long.

I'm reading the manhwa right now and it's SO WOKE!!! it's amazing and hilarious and smart and completely unpredictable!

Read the first chapter of the webcomic. It's the Mystery Spot episode of Supernatural? Like, the best one?

I'm so glad I like Kang Ji-hwan now (thank you, Children of a Lesser God) because I'm def watching this

Baek Jin-hee was a lead in one of my all time favorites PRIDE AND PREJUDICE and embarrassingly I did not recognize her name. It is the only drama I have seen her in. I am on board this project.
Kang Ji-hwan unfortunately brings back to mind a bit of a sore point and that is OCN's CHILDREN OF A LESSER GOD. It is the only drama I have seen KJH in and I thought he was giving a fine performance until I dropped it after 4 episodes. The English subbing was so bad that it was unwatchable. CLG was lost in that Bermuda Triangle where some kdramas go and never become available with good English subs.
Since HAPPY TO DIE is a KBS drama it should be available through Kocowa and possibly on Viki

I LOVE LOVE LOVE the webtoon. It's so satisfying to see a sexist asshole die in a bunch of different ways while watching him becoming a normal human being. I also love that the female lead is no wallflower. Out of frustration, she even kills him one time. :D

If the show is even 10% as funny as the webtoon, we are going to have a blast.

not a fan of baek jinhee, she ruins dramas with her acting. i like kang jihwan though.

he’s the type of manager everyone has fantasized about killing at least once
HAHAHAHAHA. So true. There are these kind of people XD

Unfortunately for him, his colleagues’ fantasies come to fruition and his character dies at the beginning of the show, only to be caught in a time rift that keeps bringing him back to life.
You mean, unfortunately for his colleagues, right? The poor, long suffering colleagues have been wanting to kill him for the longest time, and one day their dear wish is fulfilled, only to have him back to life again in just a span of one day. Can't you hear the hearts breaking all across the company?

Reminds me of Groundhog Day, which is a wonderful thing to be reminded of. Can't wait to see this!