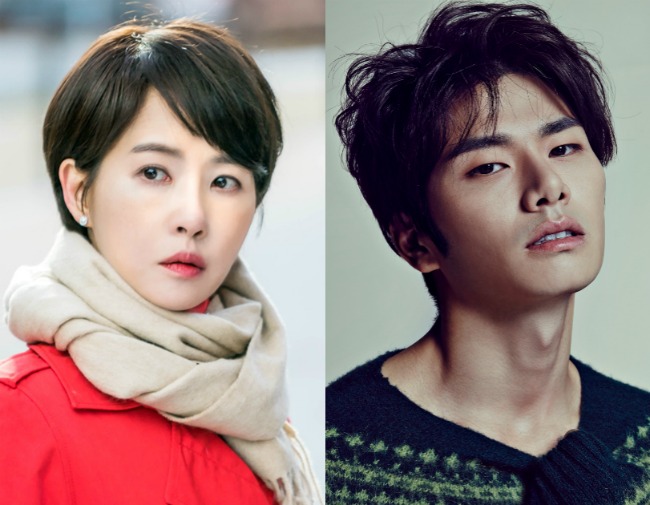 MBC has announced a new series, Red Moon, Blue Sun, to follow its brand-spankin’-new Wednesday-Thursday drama My Secret Terrius (which premiered this week), and has secured Kim Sun-ah (Should We Kiss First) to headline, along with Lee Yi-kyung (Investigation Couple). That’s an interesting pairing, and makes me curious to see how they’ll fit into the plot.

Red Moon, Blue Sun describes itself broadly as starting with “an accident that’s too short to so completely change one’s life.” A woman’s life is ruined as a result, and the drama follows the process of finding out the truth through confronting several incidents. That’s so vague that it’s not very helpful, but we have more details in the character descriptions, starting with Kim Sun-ah’s consultant character. She works at a children’s center and enjoys life with a satisfying workplace, caring husband, affectionate daughter, and a second child on the way. However, she gets caught up in a huge incident that cracks open her stable and comfortable life.

Lee Yi-kyung’s character, on the other hand, is a detective in the violent crimes unit who doesn’t necessarily seem like a particularly righteous or duty-driven officer, and might even occasionally seem like an unemployed slacker, but is actually a decent and determined cop. Contrary to his lax-seeming image, when he does land on something that grabs his attention, he focuses his efforts with a surprising tenacity.

This is described as Lee Yi-kyung’s first leading role, which will be a nice step up for him after playing so many memorable best friends and sidekicks. He has a comedic flair that often makes his characters ridiculous in a lovable way, but I’ve always thought he could do well in drama too, and I’ll be looking to see more of that side of him. And Kim Sun-ah, as we all know, is basically fantastic in everything and ought to bring her formidable charisma to this role.

I’m also perking up at the creative team, which consists of PD Choi Jung-kyu of Two Weeks, the action thriller that I found absolutely heart-pounding and riveting (and not only because of Lee Jun-ki! I’m not that shallow!). PD Choi also directed Hwajeong, Triangle, and Horse Doctor… but I won’t let that get me down. Writing is Do Hyun-kyung, who doesn’t write dramas very often but has always intrigued me when she does, as with the intense relationship drama Que Sera Sera and the eerie mystery-thriller Village: Secret of Achiara. With those credits, I’m hoping for something intense and dark.

Red Moon, Blue Sun will be 16 episodes long and premieres in November.

Via IS Plus, iMBC

Yayyyy!!! I'm so ready for seeing Lee Yi-kyung as a leading man.
It's been long seeing a drama of KIm Sun-ah so it'll be a delight to watch.
I'm curious enough to know what incident takes place and how it affects the leads and they get enrolled in it.

Is Lee Joonhyuk gonna be in this? Saw earlier news he accepted a role in the drama.

Anyone imagining this is his role in Euchalacha waikiki (Lee Joon Ki) finally get a leading role?
😉

Yay Jun Ki is finally getting a starring role. It’s so ironic how the waikiki cast have dramas that follow each other’s work first Junghyun then Jung in Sun and now Lee Yi Kyung. I’ll definitely check this out since I like the both of them

I'm probably in the minority who truly enjoyed Achiara (I luuff small town intrigue), and I'm excited for this drama. Added to that Two Weeks' PD and this casts, and I'm in. Bring it on.

I enjoyed Achiara too exactly for that reason like you. I love small town intrigue á la Poirot.

capt_blackdog is dirty but pretty

Me three! I liked Achiara for what it was and was quite engrossed in the plot.

I also followed Achiara and enjoyed the creepiness. I especially stayed for the Teacher that. Just. Won't. Die lol.
I just stopped when it got too headache inducing from all the convoluted threads and connections. But I intend to finish it.

Two favourite actors - and so brilliant at comedy!! I wish they were doing a comedy together 😸

I'm just so happy for Lee yi Kyung, he clearly deserves this lead role and lucky for him he is acting with an actress of high caliber meaning he will learn a lot...

Hope the drama will do well...

8 I do not give six flying dragons

"Two Weeks, the action thriller that I found absolutely heart-pounding and riveting (and not only because of Lee Jun-ki! I’m not that shallow!)."
Loving Lee Jun-ki is a sign of depth and sophistication. Just saying....

I loved Lee Joon-gi this year in LAWLESS LAWYER.
I will have to get TWO WEEKS back on my watch list.

and just agreeing! we who love lee jun-ki are especially smart and sensitive and know a talented gorgeous guy with a good personality when we see it.

Lee Yi Kyung is one of the up and coming actor which I adore, but sadly I have to drop Waikiki and Investigation Couple so I hope this one will be his third time's the charm 👍

I have always thought that maybe I would have liked Jung Hwan [ in reply 1988] if Lee Yi Kyung didn't lose that role to Ryu Jun Yeol, so this really makes me interested. I'm also looking forward to his first ever serious role lol.

he's the one who got mad at Onew's character for not saving him.

Rise Lee Yi Kyung! *confetti*
I haven't watched a Kim Sun Ah drama in a while, I'm looking forward to it, since this sounds really interesting.

I should watch this. Que sera sera writers!

From the maker of Two Weeks okay I'm in!

holy crap how embarrassing, I kept staring and staring and thinking "Who dis?" even tho I watched Waikiki and was impressed but put that on my loong absence from dramas. It is as if he was wearing the werewolf disguise. Sorry!!!

OMG yassss, I love both leads, and Lee Yi-kyung in a leading role, about time he got to shine! Intense and dark, both of them can do dark, hopefully the story and directing won't disappoint!