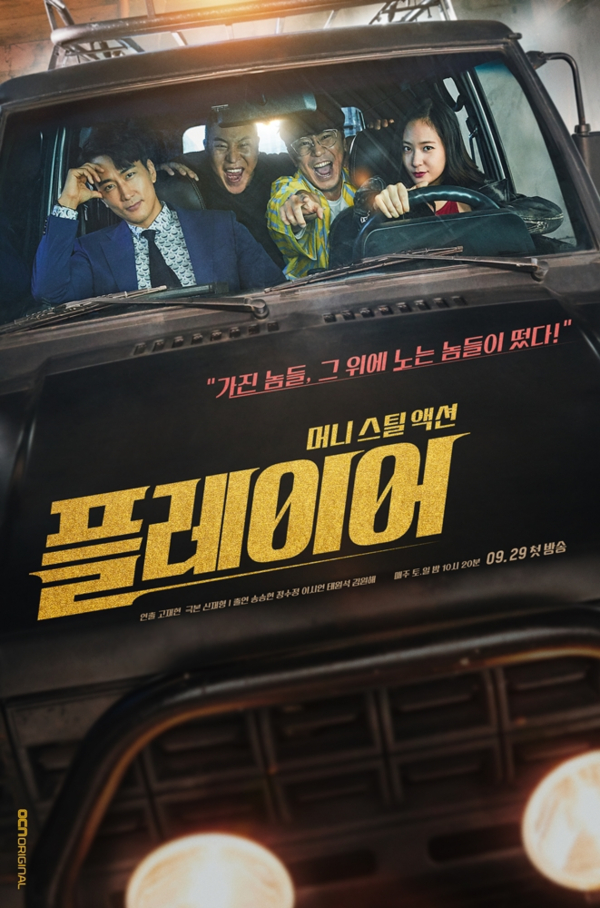 This looks like so much fun! OCN is gearing up for its upcoming show Player, which is to premiere at the end of the month. I’ve always vastly preferred Song Seung-heon (Black) in comedic roles, so I’m looking forward to watching him be the leader of this team of thieves who steal from the rich, especially after seeing him in the two teasers that were recently released.

In the first teaser, Song Seung-heon introduces us to the titular Player team: First up is Byung-min, played by Lee Shi-un (Live), who is a master hacker. Next, is Jin-woong (Tae Won-seok, Witch’s Court), known as a “first fairy,” or in other words, is the muscle of the group. And, of course, every self-respecting heist team needs a getaway driver, which is where Ah-ryung, played by Krystal (Smart Prison Living), comes in. And last, but certainly not least, is our leader Ha-ri, the “born-to-be” con artist, who promises to steal every last penny of dirty money there is.

I love the small glimpses we get of this team’s dynamics, like at the end of this first teaser, when Ha-ri is still preening in front of the camera and the rest of his teammates ask him to get in the car already in an exasperated tone. Jin-woong assures Ha-ri that he’s sufficiently handsome, while Byung-min just asks who he keeps talking to, lol. I love a good peacock character, hilariously egotistical and harmless, and I have a feeling Song Seung-heon will be right at home as Ha-ri.

The second teaser begins with the Player team, minus their leader, lounging by the pool of a fancy house. Ha-ri walks in with a duffel bag of money, only to have security guards on his tail. Everyone grabs what they need: Ah-ryung, her car keys; Byung-min grabs his computer and the money; Jin-woong faces the guards; and Ha-ri picks up his champagne glass, pfft. Ha-ri narrates offscreen the show’s motto, “The ones who will play with the rich bastards have arrived.” Jin-woong dunks the guards in the swimming pool and gets into the getaway car, where Ha-ri and Co. are waiting to make their escape. They speed off as Byung-min asks in disbelief whether Ha-ri brought his champagne glass with him as they were running away.

I am already loving the Player team’s little quirks and playful bickering. With shows like this, the chemistry between teammates can make or break the drama, and thankfully, it doesn’t look like we have much to worry about on that front here. 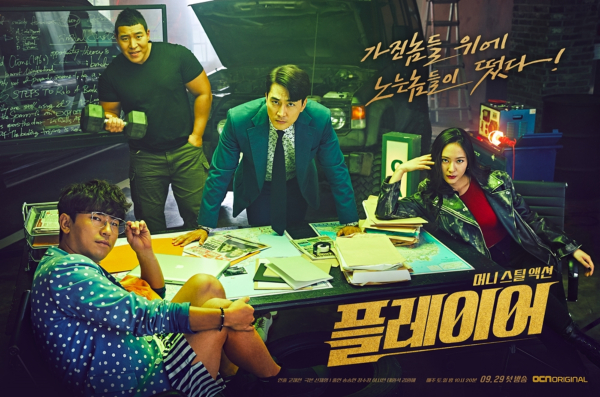 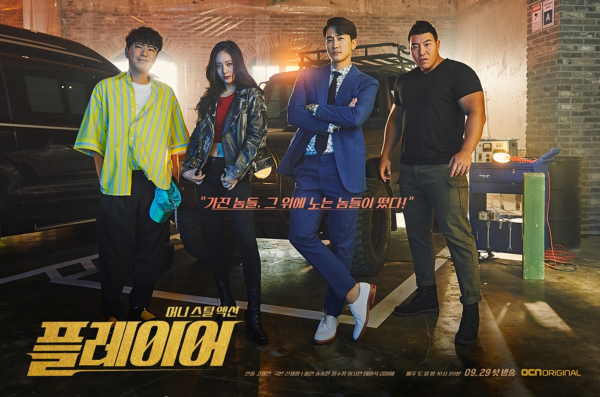 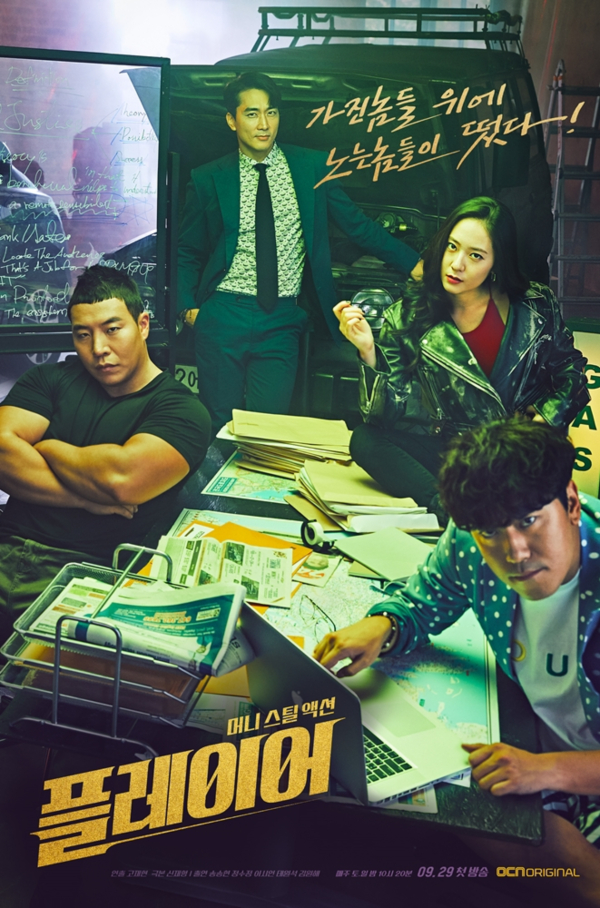 Yessssss, I'm here for Peacock Lord Song Seung-heon and his teammates making fun of him!

i can't with peacock lord! :D

I'm looking forward to this one. Silly, clever and hopefully witty. A winning combination for sure!

Agreed, it looks like a lot of fun! I'm really looking forward to Lee Shi-un!

The trailer really sell the dynamics of the team. I think that they can work. SSH in a comedy can be fun!

This is what I need to cleanse my palette from melo season. Wish it had more female characters though

This is amazing. If the writers can pull off a thoughtful plot, and not drop the playfulness of the team in the teasers, I'm sure the drama will turn out wonderfully.

Krystal with her long repertoire of popular drama with megastar costars should step up with more bold characters portrayal.
I hope she can stand and deliver with SSH and the others.
I'm getting more and more bored with image-conscious actresses.

This looks awesome. Like Squad 38 but more cheeky. Can't wait!

This sees like a fun heist drama and I’m in need of that desperately.

I watched the current episode of Home Alone aka I live Alone on Viki. I can’t believe SSH was funny. Please have him a permanent member of that variety show!!

Lee ShiEon during waiting time is just hilarious. So much time, but he spends it on picking/guessing toys through their opaque wrappers. 🤣🤣🤣 Couldn't you have learnt something or done something more productive, Sir?

Now I have to watch the episode....

I've got to watch this! If not for the funny, for the team chemistry. I'd love to see some witty gang hiests.

Song Seung-heon being funny and pulling heists! If together with the others, the entire team is involved in comedic antics, then it could certainly be an amusing ride!

OCN is always good with their group chemistry and I loved a badass female driver, it gives a realistic feeling that she can pull it off. Don't get me wrong, drama likes to make 100lbs woman a mastered martial that can kick 200 lbs guy without problem, that's unrealistic.

I don’t like her face, she looks arrogant all the time but she wasn’t that bad in Prison Playbook.

Ok. I give her the benefit of the doubt 😜

Thanks for the update on PLAYER, tipsymocha. Those two teasers were fun. I got a kick out of Lee Shi-un in TWO COPS, and can imagine his having a blast in this show. Song Seung-heon was great in BLACK. Give me the teamwork and car chases of MAD DOG and LOOKOUT without all the heartbreak, and I'll be a happy camper. I'm looking forward to a romp after a few too many melodramas. ;-)

SSH gave a riveting performance in Black, though I am still scarred by that horrible ending. Yuk, erase that memory please. He sure is right at home in this type of cheeky, comedic role. Reminds me a bit of My Princess, where he was a very likeable peacock.

you got me with the word heist team! Can't wait, just don't turn this into an angst-filled drama midway through and I'm going to stick with it.

let's keep up this quirky, fun vibe, after all the poster got me to open this news

Wow, looks hilarious! Wasn't very interested when it was announced but I like what I'm seeing. Everyone seems to fit perfectly with their character and team dynamics

I still don't know why I love Song but I do. so this is a must watch for me