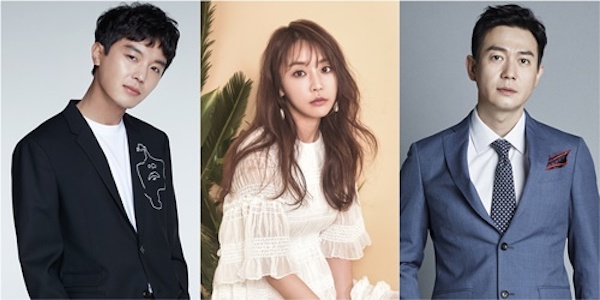 Oooh, I guess OCN is really into exorcisms this year. In addition to Hand: The Guest which just started, OCN has a new drama in their lineup called Priest, about a group of people who come together to protect their loved ones. It’s being described as a medical exorcism drama that depicts the supernatural phenomena that happens in 2018 at the South Catholic Hospital.

The main cast has been confirmed, and they are Yeon Woo-jin (Nothing to Lose), Jung Yumi (Investigation Couple, Bravo My Life), and Park Yong-woo (Life Tracker Lee Jae-goo). Yeon Woo-jin will play the faithful exorcist-priest, who moves before he thinks and acts before he prays. His baptismal name is Michael, and he’s part of a secret exorcist association within the church called the 634 Reggia. When he was young, he lost his mother to a possessed spirit, which led him to train to become an exorcist.

Park Yong-woo is making his comeback after a three-year absence from dramas, and he’ll be playing the father/mentor figure who took in Yeon Woo-jin after he lost his mother. Park plays Priest Peter who is an original founding member of the 634 Reggia, and he guides Priest Michael (Yeon Woo-jin) in becoming an exorcist. Originally, he was similar to Michael in that he was quicker to action than words, and he preferred penance to actual repentance. However, everything changed after a case eight years ago, and he’s become much more serious since then.

The medical portion of this drama comes in with Jung Yumi who plays a doctor who has a logical intellect and nimble hands when it comes to her work. She’s the rising ace of the emergency department. After her family was in an unlucky accident, she dedicates her life to saving people because she no longer believes in the existence of a loving God. But her faith in science is shaken as she begins to witness the strange happenings at South Catholic Hospital.

Upcoming OCN drama Priest is slated for the Saturday-Sunday slot after Player ends, which puts its start date sometime in November this year.

Exorcisms at a Catholic Hospital in a Korean drama?? Oh my goodness.

I'm so torn. Three of my favorites are now in dramas I'm too scared to watch.

Here for it, bring it all OCN ! My blanket and I are ready for it.

I'm loving The Guest but I think I'll pass on this one because of the medical tagged onto it.
Also the first thing I thought of when I heard 634 Reggia was some tween rap group 😂

Dibs on the band name.

I can already see the clothing line.

Yessss, I missed you so much Woo Jin!!!

Are genius chef, lawyers, doctors, CEOs out, and exorcist priests in?

good looking exorcist priest is the new 'it' position I guess
lol
but at least it saves us from blah romantic lines..?

Maybe it's because the US has a big resurgence in abuse lawsuits against the Catholic Church, but I find the notion of priests getting anywhere near handsome and/or romantic lines creepy.

Some of the best and timeless tales are ones unhindered by romantic plotlines. I say bring it on.

634 Reggia: I keep reading this as 634 Reggae and imaging dreadlocked priests performing exorcisms.

After that image, the stylists on this drama will have to work hard not to disappoint me.

I think it's a great band name for a fusion of reggae and hip hop. Everyone will wonder if the misspelling is intentional.

Now that there's a band name it is.

I accidentally deleted my comment, but I imagine this fusion has been happening for decades and I'm just out of the loop. And 634 Reggai would be a great name

@ndlessjoie, @egads,
I sort of pictured/heard fusion punk, it sounds very steam punk to me. But some reggae in the mix would be great!!!
I'm more excited by this as a band's name than I am by the drama. Unless they have dreadlocked priests. That would be worth it if only to stock up on screenshots... ^^

@rukia Yep, dreadlocked priests laying down a beat while exorcising demons is now the drama I want.

I'm all for reggae punk fusion too @rukia.

I miss my classic rom-coms. Badly.

This one looks like it will be good. And no exorcism...
http://www.dramabeans.com/2018/09/jung-kyung-ho-yoo-inna-courted-for-tvn-legal-office-drama/
I think they have also approached Lee Dong-wook...!
*praying*

Here's a link to the article I read about it :
http://blog.asianwiki.com/korean-dramas/lee-dong-wook-offered-lead-male-role-in-tvn-drama-series-reach-of-sincerity

Thank you, yes I read about it.

The current trend is to make me fall head over heels over hot priests as if Kim Jae-Wook was not enough now it has to be Yeon Woo-Jin.😂😂
Exorcism with police help in The guest and now Exorcism with doctor's help. So they're mixing the trends together.😂😂

Now we need one that includes the courtroom to have a trifecta.

This is totally crazy, and I don't mean "crazy" in a positive way.
Even if you are curious, I recommend not to watch this... It is really not a good thing for your life. Evil spirits really exist and enter into your home through show like this one!
(There are plenty of dramas to watch. Just choose something healthy)
My humble advise. 😓

You totally spooked me! I don’t know if I should ask for further explanation 😱

Most people won't believe them.

yeah, both are good i'm glad with either

Sure, OCN, it's not like I regularly need to walk past a dark church on the way home anyway.

One hot priest is not enough this drama says, so they give us two 😄
But it will take more than that to impress me. The Guest sets a high bar (and Kim Jae Wook is really killing it over there).

Yeon Woo-jin - yea!
Jung Yumi - nay! Havent liked her acting.
May have to skip this one because of her.

May I point out that the "Hand" in the title of The Guest is a mistranslation. It means "guest" actually..which definitely make the title much less awkward.

I heard this is the show directed by the ‘save me’ director which has been in the works for ages so I’m excited to see this show happen finally. Hopefully it’s as suspenseful and breath taking as save me

I'll watch it for that director alone. Save Me was incredible :O

After The Guest, I would prefer the season 2 of Partner of Justice. But I'm happy to see Yeon Woo Jin in a new drama !

Kim Nam Gil won't be a priest too ? In Hot Blood Priest or something like that ?

After doctors and detectives, the new favourite heros are priests ? For the love story part, it means that the second lead has his chances ? :p

All those similar titles are pretty confusing for me, like Live and Life :p

Oh yeah ! The one with Kim Nam Gil..
Up until now I have only seen a hot priest through Kang Dong Won.. Well, the more the merrier 😁

Show looks good. That photo of Jung Yumi, less so. She gives the impression of having recently smacked in the back of the head with a plank. Or maybe its the make-up.

I'll watch anything with Yeon Woo Jin as the lead