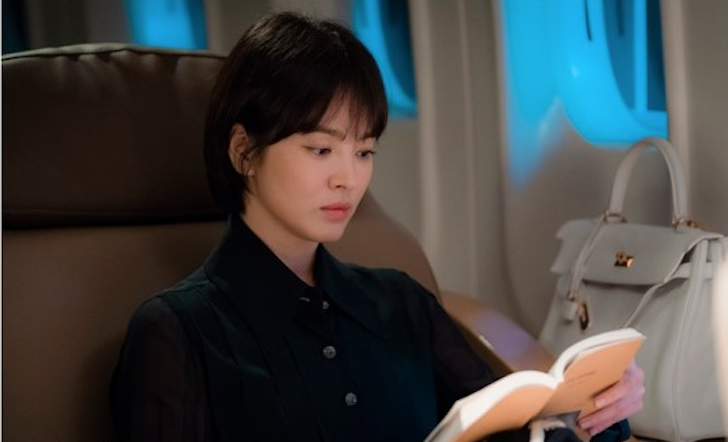 Boyfriend has set its premiere date for November 28th. It will be taking over the primetime Wednesday-Thursday time slot on tvN from Hundred Million Stars From the Sky.

Photos from the first script read were released recently, and hot on the heels of those photos are the first stills of Song Hye-gyo (Descended From the Sun) in character as Cha Soo-hyun.

Cha Soo-hyun is a hotel CEO, the daughter of a politician, and the ex-wife of a chaebol. Though she’s led a privileged life, she’s never been able to live life on her own terms. Park Bo-gum (Moonlight Drawn By Clouds) is the one who busts open her gilded cage when they meet by chance and fall in love. Park Bo-gum’s character Kim Jin-hyuk is described as a free-spirited, sweet young man who’s had a happy and normal upbringing.

Boyfriend will be directed by Park Shin-woo (Jealousy Incarnate, Angel Eyes) and penned by Yoo Young-ah. Yoo has written a string of great movies, including My Annoying Brother and Miracle in Cell No. 7, but she only has two drama credits to her name, Entertainer and Pretty Man. Both of those dramas left me slightly disappointed, so I hope she can bring some of her movie-writing mojo to this drama.

Boyfriend marks the end of a two-year hiatus from acting for both Song Hye-gyo and Park Bo-gum. 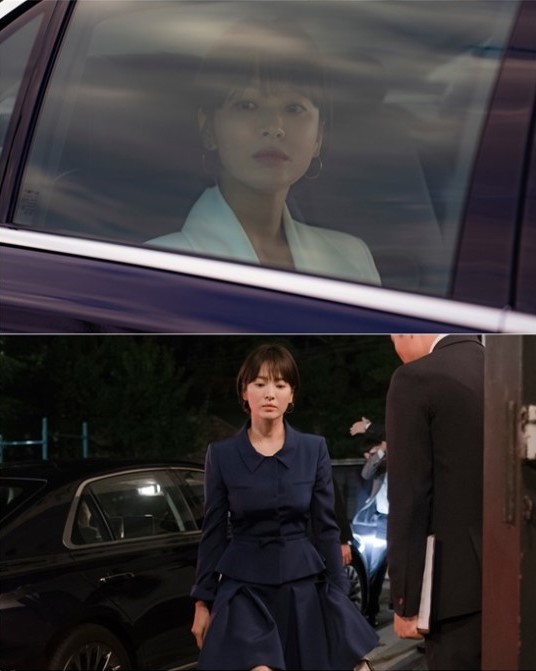 Knetz seem to be warming up to drama compared to earlier when the cast was announced. All I wanted was shk and gong too drama but I will still watch this

I found the negative response to the pairing because of their personal relationship, a bit surprising.They're actors, this is work. Why confuse the personal and the professional? In any case, glad the reception is more positive now!

what personal relationship, by that account they should vehemently oppose Song Joon ki and her marriage itself.. after all she kissed his almost brother JIS and who knows rumours were rife that they were dating with special visits to each others sets

The word "relationship" isn't used for romantic pairings alone. They're friends by all accounts.

he is friend with joonki.. not with her.. she is friends , rather his bro like 's wife..

by that logic, again anyone who knows seungi should never work with Yoona or whatever..

knetz are epitome of illogical hitting the roof

i dont really buy the couple but i'll still watch it 😂

I didn’t buy her and Joong-ki in DOTS, but they got married, so it goes to show how much I know, 😂.

I couldn't completely root for her and Rain in Full House, but that's because Rain and his half-buttoned shirt are the real OTP in that show IMAO.

That was my first Korean drama. I couldn't understand why she would like a guy who kept yelling at her and belittling her. The half-buttoned shirt was so distracting, as was its tightness. But it was different, and made me feel so many new emotions that I never felt before. I think of it with a mix of nostalgia and horror...Rain's curves will always be seared on my brain cells.

At least we know that won't happen here. 😂

omg, that would blow Korea off the map if that happened 🤣🤣🤣 That's a scenario that would happen in the 1960s to someone like Elizabeth Taylor.

so me..
i have the same problem..
i just somehow cant imagine this couple..

This week has been all about PBG! Not complaining. He’s on my fan wall. The premise really does seem “been there, done that,” but I do like the role reversal with the jaded chaebol being female and her candy hero. Park Bo-gum was made for this. And just in time for me to binge-watch when I come off my live drama hiatus in January! Thank the kdrama gods!

I actually gasped when I read the character description for the male lead, " A Male lead without a traumatic past that has scarred him forever and needs healing by the female lead? Call the cops!"..

But it sounds refreshing.

female lead is alpha here that's why.. she is the jerk chaebol with terrible blast, in search of bubbly happy cindrella to bring her love and peace

Huh. I wonder where we'll be able to see it. My head is reeling a bit over this dramafever news.

This is what I'm wondering. Hoping for Viki and not Netflix. I don't want to have to wait until it finishes to watch on Netflix.

There have been kdramas that have followed the Korean broadcast schedule, like Mr Sunshine, so we can hope for more of that.

What other apps can I use to watch dramas now beside Viki?? Omg 😮

Netflix and Amazon and Hulu although the shows on Amazon and Hulu may have been dramafever shows. Other than that, people seem to resort to watching on illegal sites rather than apps. Sometimes you get lucky and find a drama with subs on YT, most likely an older one.

Amazon is a no go. Their kdramas ask for a Drama Fever subscription. I checked out one of the kmovies available with Prime and omg. So so much different from kdrama world.

Thanks for the reminder about On Demand Korea, I always forget about them.

Thanks everyone for all the replies!

Is this a legal site? Never heard of it before.

It is legal. No one ever talks about it as they don't sub many of their shows. If you check them out, look for an EN in a little green box next to the show title. If it doesn't have it, it means the show is raw.

Maybe they can hire some of Dramafever's now unemployed subbers and start subbing more of their shows?

@Amilia I checked it out. Got excited for The Guest then noticed not all the shows had English subtitles. Guess I'll be sticking with Viki for now.

Guess what? Looks like they may be stepping up to the plate after all! OnDemandKorea announced that they will be subbing more new shows soon (and the images imply lost DF content like Beauty Inside and 100 Day Prince). And to celebrate they are giving away 2 free months subscription. Hallelujah!

@amilia Oh, wow! I'll definitely have to keep on an eye on them, especially if they'll get The Beauty Inside. Thanks for the info.

@amilia, thanks so much for sharing this good news!!!

I'm excited to see both Song Hye Gyo and Park Bo Gum again. I find these pairing interesting so we'll see how it plays out

I'm not a fan of noona romances but I think I'll watch this for Bo Gum.

Where are the stills of Park Bo Gum? I need to know if he kept his hairstyle.

I kind of think he did. Or maybe I kinda hope he did. But this MV is the most recent thing he’s done and I just want to touch his head...https://youtu.be/ra3QGPWQpWM
And yes, it’s on a one hour loop. Don’t judge.

Ally I was literally just playing the one hour loop as background when I was studying. His hair looks so soft and smooth.. You're not alone.

I really dig that hairstyle. It's different.

I'm kind of hoping he did keep his hairstyle. I was warming up to his 2000s Japanese boyband vibe.

I think I'm in the minority because I really don't like his hair haha. I'm really hoping he has cut it by the time this releases.

LOL @TrinPie, I don't think you're in the minority. But I'm really hoping he braves the drama with the new hairstyle. He has always had the same or a similar haircut. Let's have a change of style.

@trinpie You're not alone. I was hoping he would have it cut too. If it's been working all these years, why ruin a good thing? He can do the long hair in his 40s. LOL Well, let's see how this one goes. I hope Viki carries it.

I need stills of bo gummy to see what they decided to do with his hair!!!!

She is such a beautiful woman, my gawd !!! I hope it's a good drama though. *crossing fingers*

"Cha Soo-hyun is a hotel CEO, the daughter of a politician, and the ex-wife of a chaebol. Though she’s led a privileged life, she’s never been able to live life on her own terms. Park Bo-gum (Moonlight Drawn By Clouds) is the one who busts open her gilded cage when they meet by chance and fall in love. Park Bo-gum’s character Kim Jin-hyuk is described as a free-spirited, sweet young man who’s had a happy and normal upbringing."

- I don't know about the falling in love part.. I hope they would do something like My Ahjussi instead. Both are great actors so I'm keeping my fingers crossed that this will be good!

I think the problem is that Song Hye Gyo doesn't have chemistry with any of her male co-stars in any of the dramas. To me her acting is so-so and she certainly is the epitome of the dead fish kiss. I did not like the OTP in DOTS and I felt the 2nd leads were way better and had more feels. This drama sounds very run of the mill if not for its high profile leads.

Maybe for you her acting is so-so, but at least SHK's acting was once praised by acclaimed director Park Chan Wook, writer Noh Hee Kyung, veteran actors like Ryu Seung Ryong and Youn Yuh Jung. Even she won best actress at Women in Film Korea Awards.

Park Chan Wook said, "Song Hye-kyo's performance in My Brilliant Life was the most impressive."

Even in a mess DOTS, she's good enough potraying her role.

Love Hye Kyo; absolutely cannot wait. I just hope we'll be able to watch it with the rest of Korea on the right platform :'(

Not a fan of noona romance. Not a fan of the pairing. Not a fan of hers. Not a fan of his hairstyle. Only going to check of Bogummy.
I wanted to see PBG in pyscho thriller drama similar to 2015 I Remember Yo ( I consider his breakout role). Time to display good acting skills in drama with much more more meat rather than rom-com one. Yoo Seung Ho is another actor who also needs to do some heavy hitting drama. These actors have impressive acting but doing light rom-coms. Okay don't be pissed with my thoughts. I'm just stating my opinion.