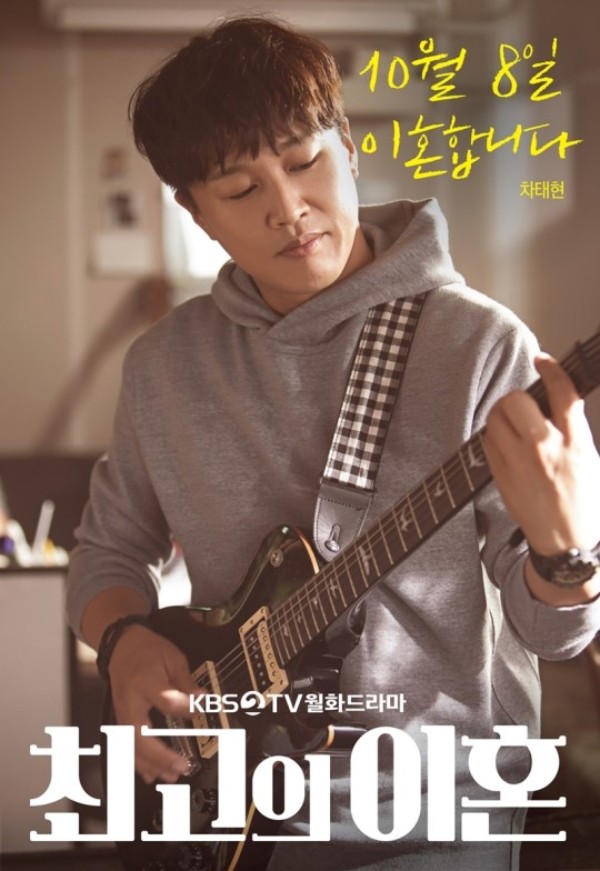 Matrimonial Chaos (aka Best Divorce) posters are out! Cha Tae-hyun (Along with the Gods) and Bae Doo-na (Forest of Secrets) star in this upcoming KBS drama that explores whether marriage is truly the completion of love. Lee El (Hwayugi) and Sohn Seok-gu (Mother) will be joining Cha and Bae to form two couples who have vastly different backgrounds and issues.

This rom-com drama is supposed to delve into how gender difference influences our thoughts about love, marriage, and family. The most recent posters show the characters individually, and highlight their personalities. In the first poster, Cha Tae-hyun strums the guitar, completely absorbed in his music. For the drama, he’ll play a man with a detailed, sensitive personality who would rather be alone than be with others.

On the couch eating sweet potato, Bae Doo-na plays his ex-wife who is described as a laid-back and positive woman (so I wonder why they broke up?). Then Lee El plays Cha’s first love, a charming woman who arouses others’ protective instincts. She is going through marital issues of her own with her husband Sohn Seok-gu, a man with a devilish charisma and an attractive aura.

Second-chance love and reconciliation stories normally aren’t my cup of tea, but I can’t stop drooling at the cast list. Bae Doo-na is a recognized acting powerhouse, and I’ve loved Lee El since Liar Game. Sohn Seok-gu made such a strong impression on me during Mother that I still can’t quite get rid of the creepy vibes I feel from him looking at this harmless poster of him drinking coffee. Cha may actually be my least favorite of the group, but I’ve had a soft spot in my heart for him from 1N2D and he’s a comedy pro, so I can see him bringing the laughter to a somewhat unhappy set of complex relationships. 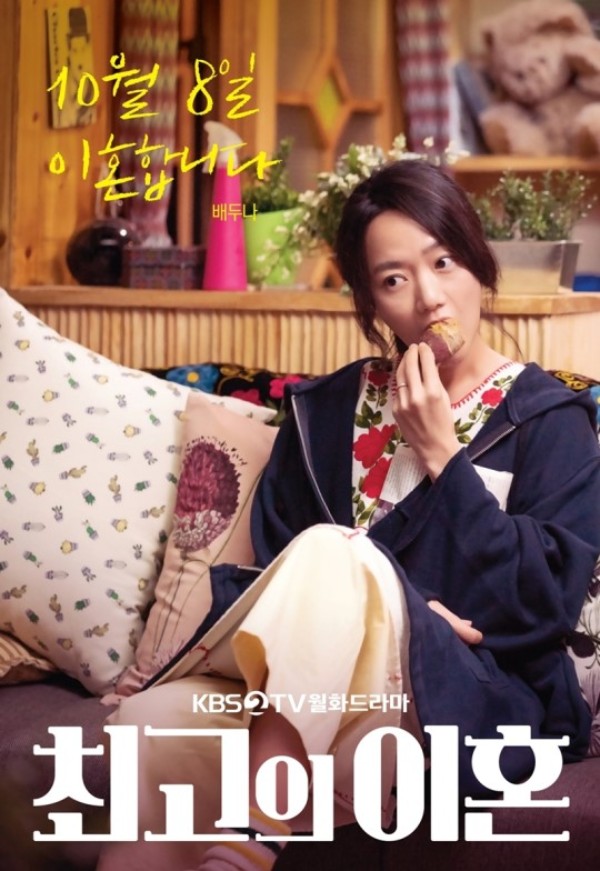 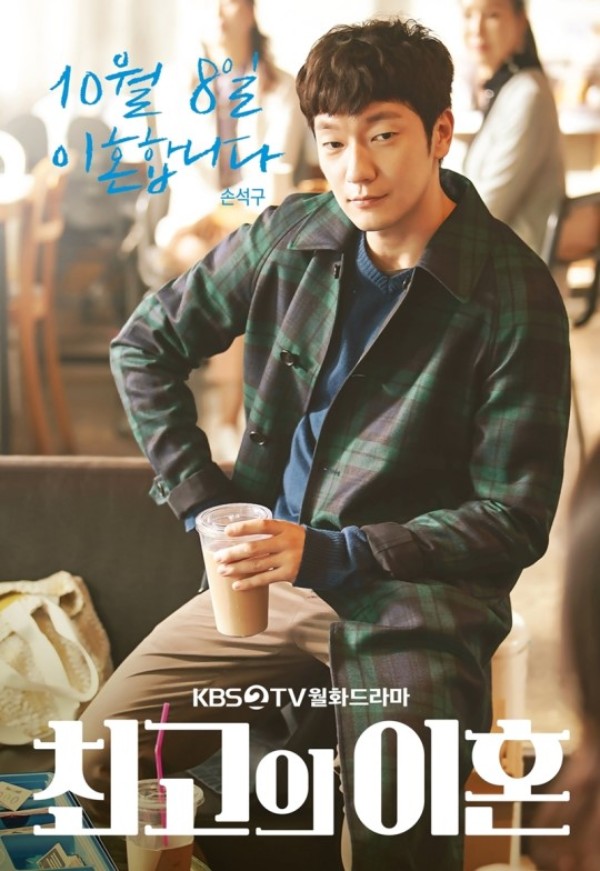 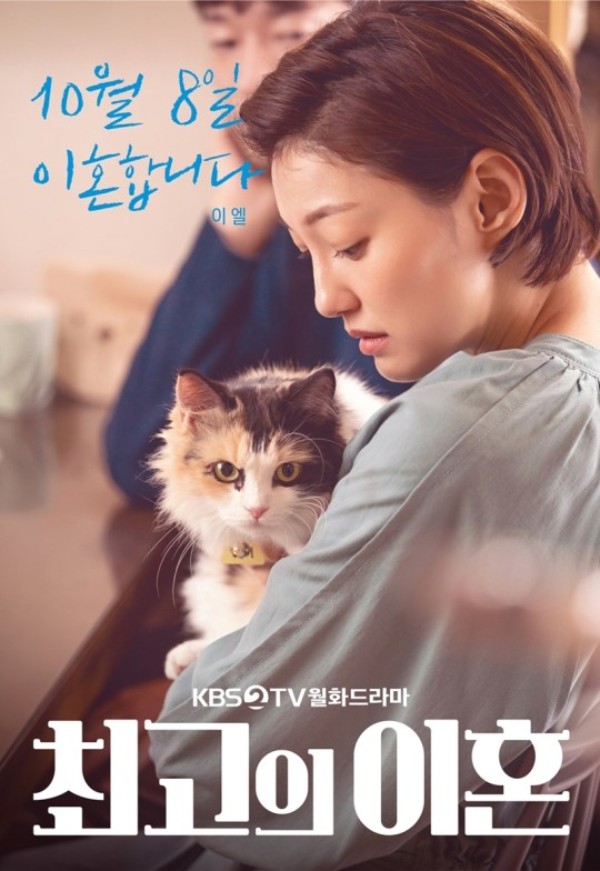 The Mon-Tues slot is really hectic. Almost all the dramas I'm watching in that slot still I'm eagerly waiting for it. The poster looks amazing.😍
RIP my sleep and RL.
Bae Doo-na is looking different.

excited for this but I wonder why no one mentioned about the drama marking Kim Yoon Jin's return to kdramas.

I have no plans of dropping currently-airing Mon-Tues dramas yet. My social life is screwed lol.

Why is there a dissatisfaction about cha tae hyun? I thought he was a big shot in chungmuro. Of course, you can like or dislike anybody but is there any particular reason why people are least thrilled for him comparing to other leads. (I came into that conclusion from some of the comments in DB)

I like CTH's movies because it's mostly human comedy with emotional twists. It's just not everyone's cup of tea.

Hello Ghost (first thing I ever saw CTH in) is one of my all time fave Korean movies.

Personally, I just find him really annoying and can't watch him.

I thought tineybeanie meant out of all four, Cha Tae-hyun is her least fave (next to Bae Doona, Lee El, and Sohn Seok-gu) not necessarily that she doesn't like Cha Tae-hyun?

I'm looking forward to seeing him.

I probably going to check for the actors alone, I like them all. Good actors contribute a lot in my decision to watch/drop a show. I've tried watching the Japanese version, but couldn't pass it more than the first half episode. Maybe I'm just not in to this writer, the original creator/writer who also wrote Mother, because I couldn't get into Mother too.

I read that Cha Tae Hyun wish to win the couple award with Bae Doo Na... So my hopes that it's a true divorce are low...

I'm torn on this drama. I really love all the actors (especially Bae Doo-na) but I am not interested in the premise at all. Maybe it will be one of those deep introspective dramas that will really surprise you.

It is. If they follow the j-dorama well. *crossing fingers*

I hope to see a lot of the cat as well 😽

Bae Doo Na. That is all.

Very excited for this one! I love the cast. I would watch Bae Doona in anything and Lee El is usually the highlight of any project she’s in. Of course, I’m very pleased that Bae Doona and Sohn Seok-Gu are doing another project together. They had really great chemistry in Sense8. And I like Cha Tae-hyun! I’m kind of surprised that people don’t because he seems so uncontroversially likeable to me. But I guess most people here are more familiar with his dramas than his movies or his variety personality. His dramas have been pretty much miss for me but I still have a lot of fondness for him because he’s in a lot of great heartwarming funny movies.

Anyway, I just watched the new trailer and I’m excited. I think it’s going to be a lot of fun.

I’m very pleased that Bae Doona and Sohn Seok-Gu are doing another project together. They had really great chemistry in Sense8.

*fans face* Hells yeah. Alas, it doesn't seem like they're paired in this drama.

This is the show I'm most looking forward to out of all the October premieres. But if you ask me why you should watch, I dunno how to describe it because there's nothing special to describe. T___T It's kind of like My Ajusshi where the premise sounds plain on paper "A girl who suffers a lot meets a man who helps her" but the character beats pack a lot of punch. Quirky punches all around.

you always manage to convince me!

Aww yay! I hope for kdrama-friends' sakes that the adaptation works well. :)

I'm really looking forward to it. It was my favorite out of all the October premieres too.

This is one of my favourite jdrama ever but i dont like the special ending.. I hope with more episodes in this version can give us better ending.. I love all the cast, they match their j ver counterparts especially bae Donna, she looks so pretty and i love her character the most in the drama.. Oh my Mon-Tue dramas are lit.. From 100 DMP, Beauty Inside, and now this.. My drama slump is finally over

I think this one sounds great. I also hope that we see more of the cat... ^^