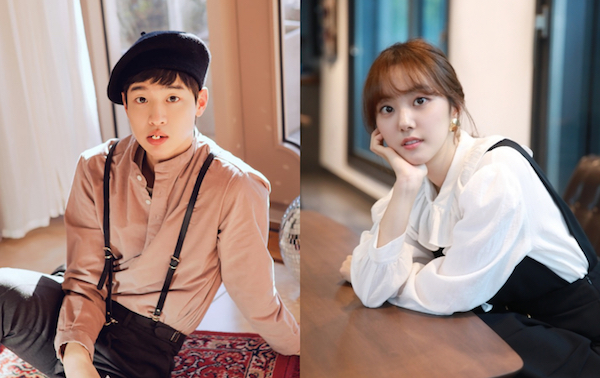 Actors Park Se-wan (Shall We Live Together) and Jang Dong-yoon (Mr. Sunshine) have confirmed they will co-star in the Monday-Tuesday KBS drama Dance Sports Girls. This youth drama is based on a documentary film by the same name and tells the coming-of-age story of six girls who enter a dance sports competition. It is set against the backdrop of Geoje, a declining industrial city.

For the drama, Park Se-wan will play a self-absorbed, arrogant adolescent student who dreams of leaving her hometown of Geoje to become a movie producer. She tries out for the Dance Sports Competition because first prize is special admittance into university. Her fellow teammates and friends will be played by Lee Joo-young (Live), Joo Hae-eun (The Spy Gone North), Shin Do-hyun (The Third Charm), Lee Yoo-mi (Woohoo Waikiki), and Kim Soo-hyun (Lingerie Girls’ Generation).

Park Se-wan debuted two years ago in a KBS drama special called Red Teacher, and has been in several well-liked shows like The Lonely Shining Goblin and I’m Not a Robot. Similarly, her co-star for Dance Sports Girls, Jang Dong-yoon debuted in 2016, and has impressive works like the period drama Mr. Sunshine and movie Beautiful Days under his belt. They have experience working together before in School 2017.

For Dance Sports Girls, Jang Dong-yoon will play a repressed dance lover who has to hide his real passion because his father is a macho man who wants his son to like “manly” things. Even though he’s tried out all different kinds of hobbies that are considered “manly,” he prefers ballroom dancing. His mother, who was a dance major herself, introduced him to dancing, and although he pretends that soccer is his favorite sport, he loves watching dance performance clips. This character was not in the original documentary, but I have faith in the creative direction of this production team. Scriptwriter Kwon Hye-ji and director Park Hyun-seok (Uncontrollably Fond, The Princess’s Man) previously collaborated for Individualist Ji-young and it was very raw and real.

Awesome. This drama sounds like a bowl of Sunshine and Rainbow soup.

Well if it's that, then I have to watch it.

Is that a picture of Jang Dong Yoon? Isn't he the actor who played Min Ho in APAD and one of the main kids in Solomon's Perjury, as well as one of the leads in School 2017? *squints*

He looks so young. Not that he didn't look young in APAD, but he looks about 14 here.

So it IS him right? Because it does kinda look like the same actor but also not. Hence my squinting..hmm

I think so, maybe

What I really want to know is what is in his mouth?
*taps on pic but fails to zoom*

Whew, what a relief @egads and @panshel! Here I thought he had to endure much sufferings to get those buck teeth fixed.

Why is there a disco ball behind him on the floor??? Did he dance all night and now have the morning popcorn munchies?! I wanna know!! 😂😆😂

@kimbapnoona He thought he was going to a Newsies cosplay party, but it was really a Saturday Night Fever party. So he's sitting in the corner eating popcorn and wishing he had a white polyester suit instead of his adorable suspenders. As to the disco ball on the floor, one partygoer got a little too enthusiastic doing his best John Travolta and knocked down the ball.

@egads, now I really want Jang Dong-yoon to dance in a tight white polyester suit in the dance sports competition! You made me want all kinds of things to happen in dramas today!!!!! 😂😂😂

I saw Park Se Wan for the first time as Kkot Bi from Radiant Office and I liked her in that drama.. Glad that she's landing lead role now 😄 I'll check this one for her

Yay for School 2017 reunion! Judging from that drama alone the casting is spot on.
Also, 8 episodes! Perfect.

Thanks for the casting news, tineybeanie.

Park Se-wan did a good job playing Yeon Da-yeon in MARRY ME NOW? / SHALL WE LIVE TOGETHER. She and Yeo Hoi-hyeon, who played twin Park Jae-hyung, constituted the youngest of the three couples in this family drama. And they were both cute as a button while respectfully standing up to her scheming hospital exec father and hilariously protective uncle (Lee Sang-woo). She nicely portrayed a formerly-overweight young woman who had been mercilessly criticized in school, only to later blossom into a real looker who lacked self-confidence. The real fun came when she crossed paths at her very un-chaebolesque office job with the one classmate who had treated her like a human being and was himself from a working-class family whose mom had died. Her arc in the story was a good one, both individually and in combination with Jae-hyung -- and his romantic rival, their chaebol boss, and haughty stepbrother all rolled into one, Choi Moon-sik (Kim Kwon). Having been wangtta, she conveyed an initially meek and fearful character who gradually grew up to know and speak her own mind, yet remained kind and compassionate. She pursued a career of her own for the satisfaction it brought her, to the complete mystification of her wealthy parents. Eventually she had to put her foot down and lock horns with mom Kim Mi-kyung. It was satisfying to watch Park Se-wan portray her evolution.

Wow, I have a low desire to watch this show but what you've written sounds so lovely.

Thank you. Just a bit of fangirling for the young actress -- and her beau, who is quite a noona killer. ;-)

50-episode dramas tend to do that to people. LOL! On the other hand, when done well, there's lots of time for character development. ;-)

Oh I REALLY like Park Se-wan in the supporting roles she's been in. She's got a really bright, adorable energy. Not surprised to see her getting a leading role!

Were these actors cast based on ballroom dancing ability? Kim Soo Hyun was an idol trainee on Produce 101 and MIXNINE, but Jang Dong Yoon's dancing on You Who Forgot Poetry was questionable.

Well, I only remember Jang Dong-yoon (Min-ho) dancing in A POEM A DAY in the Shinsun Hospital Flashmob. It was probably one of the best scenes in the drama imho because everyone sort of got along. Here it is. JDY makes a sort of Cha Cha Cha move at the end.
https://www.youtube.com/watch?v=AYAv6Lozpv4

This "Plz Don't Be Sad" flashmob was what I was referring to. I love the scene too, and Park Sun Ho can dance as he was an idol trainee, but Jang Dong Yoon is super stiff.

I like both leads and remember them fondly in their previous works! Park Sewan was adorable as Sarang in School 2017 and as lovesick smarty Pie in INAR. I remember Jang Dong Yoon in School 2017 and APAD. Also adored Individualist Ji Young so looks like they are in good hands.