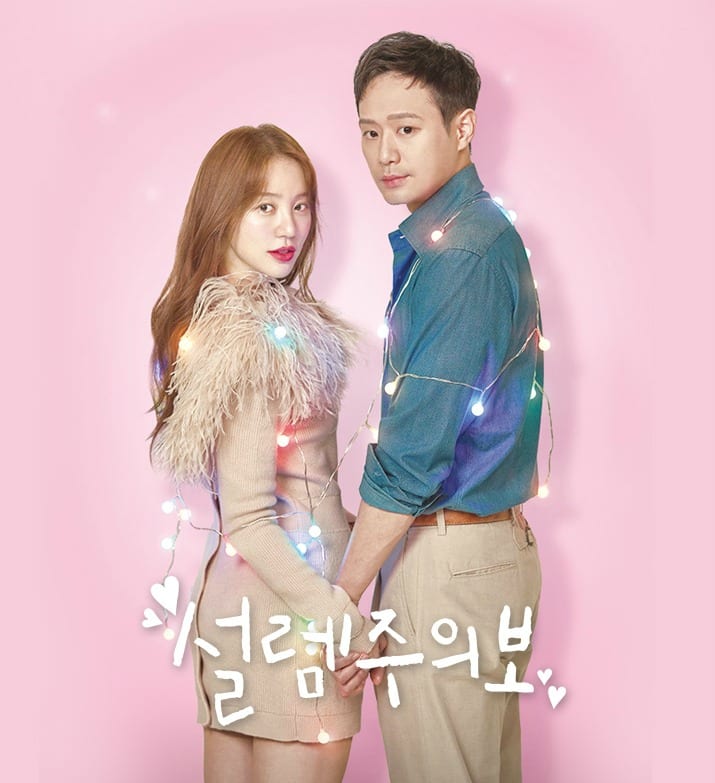 Reasons to watch: Yoon Eun-hye is making her long awaited return to dramas alongside Chun Jung-myung in this adaptation of a Korean web novel. In the drama, Yoon Eun-hye plays an A-list celebrity. Despite being the rom-com queen of the entertainment scene, she’s unlucky in love in her personal life. However, she’s a romantic through and through and is waiting for her one true love. Chun Jung-myung on the other hand, takes a more clinical approach to life. He’s an award-winning doctor with a thriving dermatology practice–he even offers free treatment to underprivileged burn patients. Though Yoon is sure that true love is out there, Chun doesn’t even believe it exists. When events threaten to expose personal secrets, the two end up agreeing to be in a fake scandal in order to protect their secrets. Fate works in strange ways; what seems like a business agreement may end up being the unconventional start to a real relationship. The drama is described as being a warm, sweet romance with comedic touches.

Thanks @stroopwafel
This sounds just like the kind of light, easy-watch I'll need after The Guest and 100 Million Stars!!! It will be nice to see Yoon Eun Hye again. I liked her a lot in Goong, Coffee Prince and even in Lie To Me. And contract relationships are one of my catnips in drama watching. 😃

Same GB! Also can't believe a drama with YEH is about to air and her casting wasn't just a rumour. I like that this contract relationship is benefitting the both of them; no one is doing any sacrificing here. XD

Thanks @stroopwafel, loooooove your moniker.

I hope to see more of you if this show gets recapped here on DB. Even if it does not get recapped, I may hang out in this 'Premiere Watch' thread to chat about how I feel about this show. 😄

living with a robot..
is that contract relationship
or scifi fantasy romance
or Artificially intelligent romance

2 u giraffe me crazy

This sounds good. I hope this one works very well for Yoon Eun-Hye after her other recent projects. I'm excited to see how both protagonists will eventually cross each other's paths.

But. Well. Dramas are all about execution, I guess?

@girlfriday doesn't do these anymore?

99% of Korean actors and actresses look plastic these days. So sad. Stick with your natural beauty.

i loved heart2heart and i know the writer didnt do this but that's why i like chun jung myung ...we will see

Same here. And I wonder if the writer is good. Because she is a good actress. It is just that she has made very very bad written dramas! 😂😂

very very badly written dramas indeed. the last thing I watched with her (after Coffee Prince and Lie to Me) was Marry Him If You Dare and it started well but OOF it went bad reeeeal quick!
:-(

I wish they hadn’t done it to her. That hair color, that make up, ... :( she looks like she has been in bed for two weeks because of the flu. Pale..
But I miss her so damn much and wish people go easy on her drama and support her. Can’t imagine another five years of absence💔

I was truly really in love with her after Coffee Prince and even Lie To Me (that Coca-cola kiss was eeeeverything!!!!) but haven't managed any other of her kdramas since...
I do wish her well, though. Too bad she's seems to be getting so much flak (according to Wikipedia) :-(

I AM truly in love with her. She is the kinda actress who is willing to go through whattheheckever that is needed for her role. Coffee Prince per se shows how dedicated kinda girl she is.
Unfortunately time never waits for anybody and this industry is like a battlefield. She didn’t get good offers and her fame and chances went downhill.
I just want her good opportunities in the near future. She deserves it.

9 bebeswtz❣️Xiao Zhan is my joy 🥰

From casting reports, to casting confirmations, to filming, promoting, and now airing.... This has got to be one of the dramas I've seen it done the fastest XD

I have a soft spot for YEH from Coffee Prince days (still my favourite OTP) but this sounds and looks like a flop already. Haven’t seen such bad posters for awhile. Eek.

They both look so...off in that promo poster, looks like really bad photoshop :(

Anyway i'm looking forward to this, I'm always in the mood for dramas with old school rom-com vibes.

And I thought it was only me that I hated the poster. It looks very awful, as if it would promote already a bad drama. Let's have hope that the production team and the writer are better than the graphics....

The poster is horrible and the actress looks NOTHING like YYH.

Thanks for your Premiere Watch, @stroopwafel. I hadn't planned to tune in to FLUTTERING ALERT, but for the heck of it watched Ep. 1. This is more entertaining than I thought it would be. It's great to see uri Eun-chan of COFFEE PRINCE back on the small screen. The potential downside: scheming chaebol parents. Grrr.

@pakalanapikake
I watched Ep 1 as well. It had some but not all the subs and the sound wasn't synced with the action so it was not at all an ideal watch. While I like the initial premise (preferably sans scheming chaebol parents,... but I guess they are needed to push the plot and OTP together) and the way the characters are written for the beginning, I had a mixed reaction to the overall production.

Some parts were fine but others seemed off. The scene in the small room was strangely shot, as if the cameraman really had no where to stand and had to take an out of focus shot of the back of the actor's head (alternating between actors) while filming the conversation. There was a strange look about parts of the show that made it feel like a soap opera of lower production value. It's been a long time since I've watched Yoon Eun Hye, but while she looked familiar in her actions, her face has 'changed' (more narrow jawline?) and her acting was sort of overdone. I'll have to give it some episodes and see if she settles into character more over time and becomes more natural in her good natured ebullience. Aside from these inconsistencies, I guess it could work out to be the light and happy watch I've been hoping for. At least the main OTP are likable!