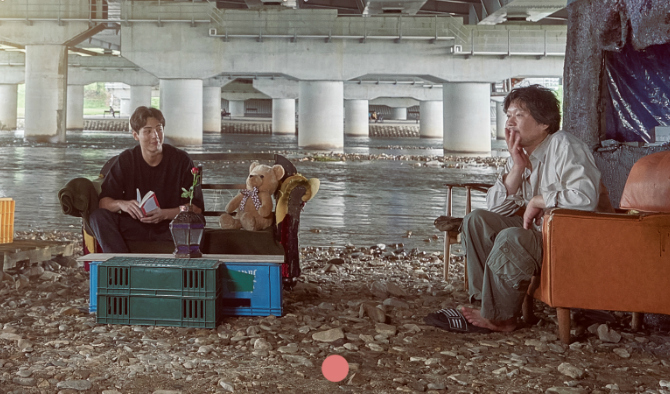 Ping Pong Ball, which aired a few weeks ago as a part of JTBC’s Drama Festa, is a two-episode drama adapted from a webtoon of the same name. I don’t usually seek out these drama shorts — mostly because I’ve grown so accustomed to 16 to 20 hours of plot exposition that watching a drama that clocks a total of 190 minutes seems like too flimsy an amount of time for much to happen. Wrong!

Ping Pong Ball is about the friendship that develops between a young college student, Young-joon (played by Ji-soo), and a homeless man (played by Yoo Jae-myung), hereby referred to as the homeless ajusshi. Underneath the simple plot however, there’s a somewhat dark exploration of the influence people have on each other, and the repercussions that can follow.

Two stories unfold as the drama begins: the discovery of a murdered homeless man and the mystery surrounding it, and Young-joon meeting our homeless ajusshi. Young-joon is on summer break from college, and as the details fill in, we find out he’s living on his own with his family MIA (somewhat like an abandoned puppy), and that he’s having a rough time coming to terms with a one-sided relationship he’s invested his whole heart into. One night, Young-joon is blowing off some steam running along the Han River. There’s an incredible heat wave, and he pushes himself to the point of collapse. He’s saved by the homeless ajusshi who lives under a nearby bridge, and that’s the start of their complicated relationship. 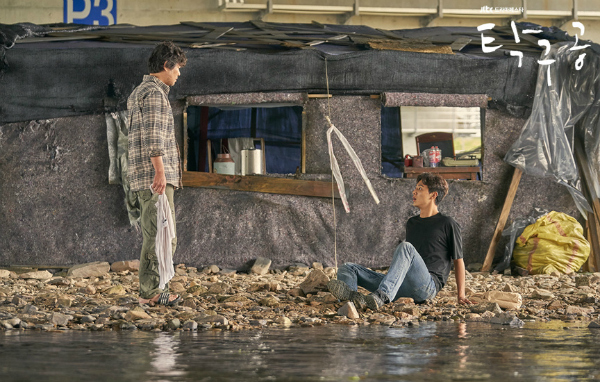 Whether it’s out of suspicion, loneliness, curiosity, kindness, or all of the above, Young-joon keeps returning to the homeless ajusshi’s makeshift tent. They slowly get to know each other, and we hear more about their stories. Notably, we find out early on that our homeless ajusshi is not only a big shot investor who has fallen from grace, but that he’s terminally ill with a brain tumor the size of a ping pong ball (Me: Nooo! I’m not ready for another brain tumor — I haven’t gotten over the one in Time yet! Should I turn this show off?)(I’m glad I didn’t). It’s their discussion of broken romantic relationships that actually bonds them, and Young-joon quickly takes on the homeless ajusshi, and makes it his mission to help him make amends with his estranged wife.

Ji-soo seems really at home in this role, and it suits him. I love when roles feel native for the actor, and Ji-soo as a twenty-something college student running around in T-shirts and sneakers seems just right. On the surface, it seems like there isn’t much for him to do, since this drama has no loud moments — but it’s in the subtleness of the story that you can really appreciate the nuances of an actor’s performance, their presence on the screen, and what they do with the quiet.

Ji-soo plays a philosophy major, and his character is the quintessential combination of a young student with the burden of too much knowledge (let’s call it book knowledge), but not a lot of life experience. But his naivete and innocence make you like and trust him as a protagonist, and it has a lot of bearing on how the plot unfolds, too.

In one scene in the middle of the drama, Young-joon is hanging around on the homeless ajusshi’s dilapidated furniture and reading (he does a lot of this), and the homeless ajusshi asks Young-joon why he will drink, but not smoke. Young-joon answers that drinking alcohol doesn’t cause harm to others, but smoking causes harm to others around you, without their consent. The conversation heads in another direction, but this is an important part of Young-joon’s character: His desire to help and mend relationships is sincere (whether it’s the homeless ajusshi or his one-sided love), but it often gets him in over his head.

In a style that feels a bit unlike mainstream dramas, the camera does a good deal of following Young-joon around, so the audience discovers things with him. It adds an immediacy, and also suspense — and that’s something that this drama has plenty of. It’s not an edge-of-your-seat kind of suspense, it’s more this general feeling of unsettledness. All the bits and pieces of the story we see hang together, but don’t quite fit. There’s never enough to fill in the “true” story.

Additionally, a good half (if not more) of the drama takes place at night, which has a huge effect on the tone, and adds even more mystery to the story. First-person voiceovers allow us to hear what Young-joon is thinking, and so we trust him, and we start to understand — or even sympathize — with his mission to help the homeless ajusshi. “I’ve decided to trust you,” he announces one day when they’re talking. I’m not sure if I was completely behind that, but I understood where it came from. 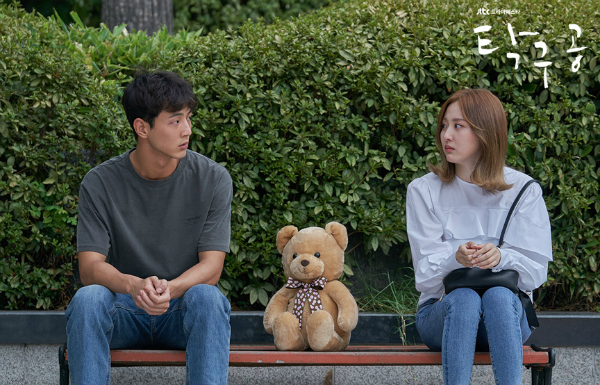 Due to the editing in Ping Pong Ball, which is top-notch but often hard to follow, the story sometimes feels disjointed, although perhaps that is an intentional choice that adds to the narrative effect. It fills in pieces of the story you were missing, but it’s not always immediately clear if you’re watching the present or the past, or the continuation of a scene you’ve only seen a part of earlier.

The execution should fit the story, and in Ping Pong Ball, it certainly does. The story ends with as many questions as it started with. We start out with a murder, and wonder who committed it and why; at the end, these questions are only partly answered. A girl named In-ha (played by Na Hye-ryung) throws a teddy bear at Ji-soo and rejects him. It seems straightforward as an opening scene, but is there more to it when all the context is added? Of course.

The drama does a great job of making you ask questions, and then giving you clues with which to answer them. But you might never really answer them. Why? One of the clues is in a conversation between our two leads.

In a beautiful scene in Episode 1, Young-joon tells the homeless ajusshi about his complicated relationship with In-ha, and how difficult it is to nail down. Ajusshi asks him if he knows how to write “ambiguity” in hanja, and then proceeds to write it with a marker on the table in front of them. The characters, when combined, mean “ambiguity,” but he tells Young-joon that the word actually refers to a very small number — 10 to the negative power of 13, to be exact. He says that people come up with names for all of the big numbers, but there’s not a lot of attention on names for small numbers — and when he mentions some of them, they are words and terms about ambiguity and hesitation.

“We learn that numbers are very certain things,” says our homeless ajusshi, “but some numbers aren’t as clear — that’s what these words imply.” They’re talking about numbers and language, but they’re also talking about relationships and interactions. Sometimes these things don’t have a clear definition or solution; sometimes, life is ambiguous.

The tone in Ping Pong Ball seems to lighten for a spell, and we see Young-joon’s positive effect on the homeless ajusshi. He cares for his health, helps him monetarily, and helps him find the courage to try to meet his wife again. But this drama has done a pretty good job of letting its audience know there isn’t going to be a quick solution, or resolution for each plot line. We’re almost expecting the bottom to fall out of Young-joon’s plan before it actually does.

I’ll admit that I have a weakness for stories where the protagonist is thrown around and taken in by others, or overwhelmed by circumstances and then — after the plot climax — has to come to terms with everything that has happened. That’s where we leave Young-joon. After he realizes that the homeless ajusshi has picked up and gone and somewhat taken advantage of him, he asks himself the probing question, “What have I been doing?” He lingers in the ajusshi’s abandoned tent, under the weight of that question.

If Ji-soo’s character is the innocent reliable narrator, Yoo Jae-myung’s character is the embodiment of the idea of ambiguity. His character comes alive with Yoo’s fantastic performance. One moment he is warm and fatherly, hanging up twinkling lights in his tent and sharing hard-earned wisdom with Young-joon. The next moment he is utterly dark, complicated, and not exactly trustworthy. His entire performance seems like a test to put my finger on who he really is, but in the end I’m not sure I really know.

As the audience, we get to see parts of the narrative that Young-joon doesn’t and thus we get a slightly broader picture of things — but much is still left unanswered. In the closing frames of the drama, we watch Young-joon leaving the tent and the shadows under the bridge, and walking back into the sunlight towards the city. He’s left with questions, just as the audience is, but the open ending reinforces the punchline of the drama: Life is ambiguous. It’s full of relationships that can’t be defined, feelings and concepts that we don’t have words for, and stories without endings.

I loved this mini. It was contemplative and sad. It was also good to see that sometimes we should believe the best of people even when we think the worst. Just well done to the cast and crew.

These days I rarely finish any dramas (I blame Guardian), so I hope there will be more reviews of (great) drama shorts!

Thank you @missvictrix for posting about this! I talked about it on my fanwall when it aired, and I definitely recommend it to any melo junkies out there. The drama short is really thought-provoking and open-ended, and not necessarily depressing as much as it is a reflection of life (a lot like My Ahjussi).

I think I will always remember Ping Pong Ball because it was the last thing I saw on Dramafever before it got shut down. Just like I was left in confusion at the end for not knowing the answers to my questions, I was confused as to why the website was gone so suddenly. Oh well, ambiguity right?!

ohhh~ are we getting drama special recap now?
I watched it based on a Beanie recommendation. I forgot which Beanie but thank you. It was a good recommendation.
I like the overall melo tone of it.

Thank you @missvictrix for putting this on my list and convincing me to give this a go!

Same here! Definitely going to give this a go!

Thanks for the minicap, @missvictrix . The screenshots too are pretty great, they enhance the feeling you're conveying through your words.
That first/header picture feels really unique to me.

Thanks for the thoughtful review, i feel like i need to see this now. It sounds almost exactly like a reflection of my life right atm: nothing has meaning, nothing makes sense, and it's probably better i stop trying to rationalize everything and just take everything as it comes.