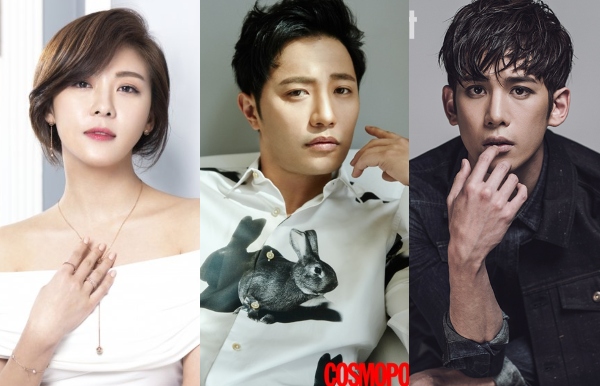 Uh-oh. Things don’t look too good for planned MBC action drama Prometheus. This drama has been plagued with a bunch of production issues since its conception in 2016. Initially, it was backed by KBS, but (possibly due to the high cost of production) it was dropped and subsequently picked up by MBC. Originally, Prometheus was slated for broadcast in 2018, but the air date has been pushed back to “sometime next year.” The latest controversial news state that its three lead actors have dropped out of the project.

They had such a good cast too… Ha Ji-won (Hospital Ship), Jin Gu (Untouchable), and Park Ki-woong (Return) were going to play the main characters in what was supposed to be the next big action blockbuster drama about a palpable nuclear threat resulting from the tense North-South Korea relationship. However, they have reportedly all dropped out for personal reasons.

Gah, I’m hoping the Prometheus team recovers from these misfortunes though, because their vision was awesome. Kidnapped North Korean nuclear scientists, an international race to rescue them first, and possible Hollywood stars as cast members—that would be amazing! It’s just very expensive, it’s 30 billion Korean won-expensive (roughly 26 million dollars). So, there seems to be speculation that it is a high risk-high reward project that a lot of people don’t want to become involved with because of the high possibility for failure.

For now, MBC has stated that they will announce an official statement about their resolution on the three main cast members suddenly dropping out. In the meantime, the production team has been screening, through an open audition system, to cast both rookies and experienced actors for various roles in Prometheus.

Fingers crossed that it will actually be broadcast next year!

I was thinking the exact same thing, just in a slightly different wording: "This is how Prometheus crashes and burns".

this drama and Four Sons should just cancel their projects. and let the crews search another project to do instead of wasting time like this.

No no no. Four Men will happen!

Even if Park Hae Jin has to make a blood sacrifice under the full moon, invent time travel and/or or play every part himself AND direct AND produce. And officially change the name to Vanity Project: A Park Hae Jin Story*

*I do actually like PHJ, I just think he should stop beating a dead horse.

Also it *is* now apparently called Four Sons and there is even more controversy around it.

Exactly. Four Whatever-it-is-called just needs to dissolve so everyone can work on new stuff.

Yikes. The drama behind the drama.

Four Men is pretty much stalled indefinitely and any conversation about reviving it is just going to remind everyone of the mess. Park Hae Jin -- who I love so much! -- just needs to move onto a new project. He needs, like, a fluffy rom-com to get himself back on the map.

You do kind of match a bit since you like to play inanimate objects in K-dramas. XD

Between you and Oppa playing different people, the drama is basically finished.

Omo, mary got there first ☺️ *chortles*
I was going to ask which geographic feature YY wanted to take on this time. Speaking of getting him back on the map.

@mary @bbstl @pakalanapikake
As you know, I'm busy playing the island, I'm like half-submerged in water all the time, my lower half's turned blue from hypothermia, and I've gone numb in many parts, while my upper half's all dried up and wrinkled and splitting apart from lying all day long in the sun. They don't give me any lines to read, and people walk all over me, but do you hear me complain? Nope. Because I'm a professional, that's why.

Your performance is top notch. YOO-BAEK is lucky you have his back, despite the frostbite and prune-ified parts from soaking in seawater. Next time, pick a tropical island. ;-)

But since FOUR MEN is apparently dead in the water, maybe you could play a tsunami to put it out of its misery. Or four Trucks O' Doom. ;-)

They should change the name to Four Suns, so that it'll see the light of day. Lame, I know, but that's all I can do, make lame jokes and cry sadly for Oppa. 😭😭😭😭

Amen
Cut your losses. Find another (better) project.
I dont know why sometimes they so adamant about certain project tho. Not that the plot/script getting better each time it gets postpone anyway

i had my fingers crossed for Joo Ji Hoon in the beginning, then for Jin Goo... and now, they are gone.....

Time for Netflix to do what they do best, swoop in and rescue them.

I'm sad about all 3 of these actors dropping out as I really love all of them. Hopefully if MBC moves forward with production they can cast 3 equally awesome actors so I don't wonder 'what if..'

That's what I was thinking, too. I wonder if Mr Sunshine was considered a success by Netflix? How much did it cost? How do they measure a kdrama success, anyway?

I thought MBC already dropped this drama too.

"MBC addressed this issue and said, “The broadcasting of ‘Prometheus’ was never a confirmed matter. We had a discussion and final decisions were made not to air the drama on our channel.” MBC added that not broadcasting this drama was already confirmed before Ha Ji Won’s departure"

I'm not so interested in the drama here, but these portraits of the men stopped me in my tracks. How can they be so damned sexy?
I mean, Brad Pitt and George Clooney are totally handsome, but I don't remember seeing photos of them looking as sexy with bedroom eyes as these men and most of the Korean actors/idols.

How do they do it? Does the photographer say, close your eyes halfway and think sexy stuff?
Anyhoo - just commenting on the beauty of these people. Sigh.

You made me laugh. Brad and George are fine looking, but they definitely are mere shadows compared to many Korean actors.

I know! At this point, all the caucasian men around me are just so blah. I don't watch regular tv but when I do, I find myself peering at the men and wondering why do they not look at handsome? sigh. I'm very sick.

Pffft... I wonder what they tell them when they make them pose with pineapples on their heads then >___<

Disclaimer: I don't really know if they ever did a photoshoot with pineapples. But odds are, yes, someone already did.

I don't see this drama happening at all.

I wonder why is it so hard to see Park Ki Woong on screen despite his talent? Is he un-loved by drama viewers in Korea?

Given that the drama idea was originally conceived in 2016, I doubt anyone will be willing to back up this project because of the shift in political climate. This sort of reminds me of webtoon creator Kim Poong who scrapped an idea about North Korea he was working on for a year. It seems better for everyone involved to just move on at this point instead of wasting more time and resources.

North Korea seems like it would be a hot topic for the International audience (hey, Netflix!) but maybe it's currently too threatening or too political or too something in SK?

The hand placement in the pictures of the three of them made me giggle - I made each pose and don't think I ever sit in any of those positions, haha.

Haha you made me do the poses too!

http://www.dramabeans.com/2015/11/mbc-adapts-contract-marriage-webtoon-cat-and-dog/
MBC is still unable to do the 'Cat And Dog' drama.
They're very irresponsible on these issues.

Isn't the reason for this drama being pushed back the new political tendencies of the government?! They want a better relationship with their northern neighbor! They are practically one country!

My screen is always ready for Ha Ji Won in an action drama...it's going to be lit😎