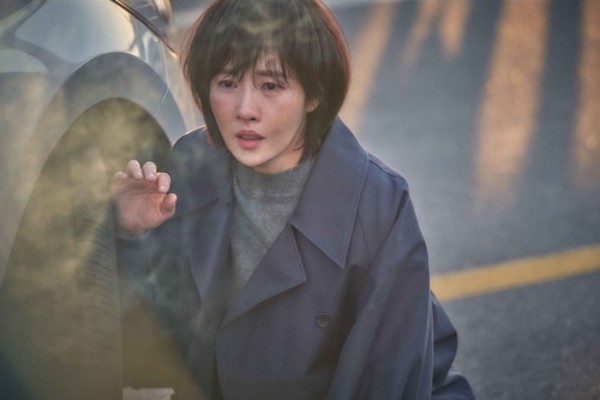 This drama looks intense and tragic already. Red Moon Blue Sun recently released new stills of its main characters, played by Kim Sun-ah (Should We Kiss First) and Lee Yi-kyung (Woohoo Waikiki). In this new MBC drama, a suspenseful story unfolds about a woman who meets a strange child. That meeting is the beginning of her entanglement in a mysterious case. With only a poem for a clue, she begins her search for the truth.

Kim Sun-ah plays the main character, a child psychologist who is a dutiful daughter and a devoted wife, and Lee Yi-kyung is the violent crimes detective whom she meets along the way. Lee Yi-kyung doggedly pursues the person behind this series of mysterious crimes. His character is a rule-follower who also has great instincts when it comes to investigations, which makes him so good at his job.

In the stills below, he’s shown with his face all cut and bruised, but he’s clearly more concerned about his case than his face. Whereas, Kim Sun-ah looks like someone’s completely knocked the wind out of her, as she stares at something in complete shock. Oh no, I hope no one dies.

Honestly, I’m looking forward to Kim Sun-ah, because her recent works haven’t really been my cup of tea (although I’ve heard she was superb in both Woman of Dignity and Should We Kiss First). According to reports, she was so immersed into acting from day one at the script read that she spilled tears during the first reading of a scene. Man, she’s such a powerful actress. Of what I’ve seen of Lee Yi-kyung, he’s great when he’s playing a lovable idiot and this turn as a serious detective will let show off his acting skills. I’m happy to see that he’s gotten this break in his career, where he’s the lead and has the opportunity to express his range in a more complex character.

MBC Wednesday-Thursday drama Red Moon Blue Sun, directed by Choi Jung-kyu (Triangle) and written by Do Hyun-jung (Village: Secret of Achiara), will begin airing on November 21, taking over the slot of My Secret Terrius after it finishes its run. 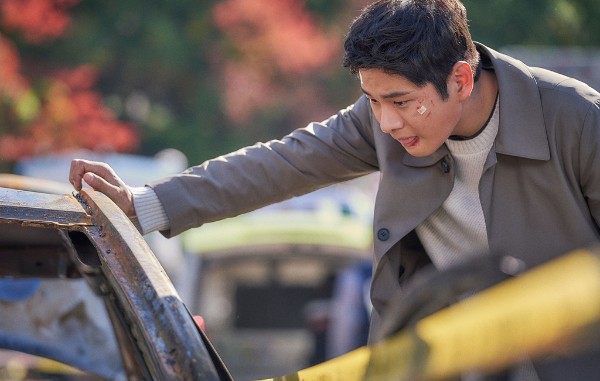 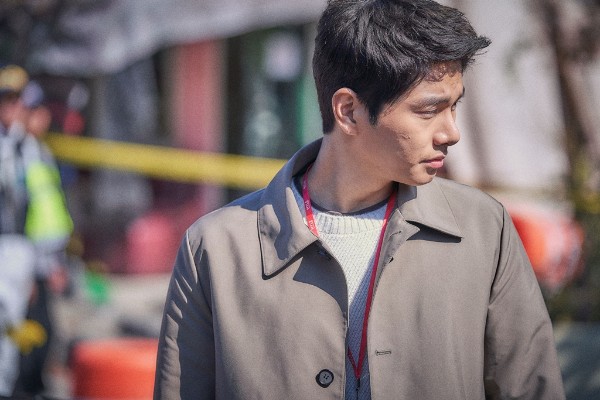 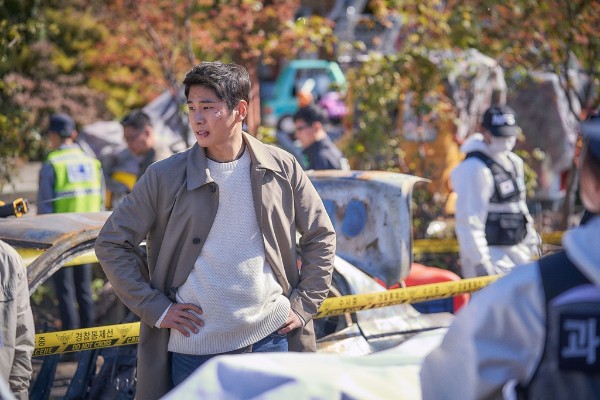 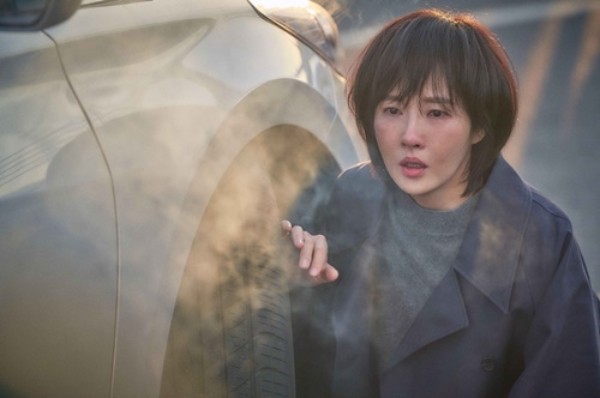 Glad that Lee Yi-kyung was given this huge break and opposite THE Kim Sun-ah at that! I hope he and the whole teams do well!

I remember when I first saw him in MLFAS and thought he has no chance with that wierd nose (shallow I know) but now I enjoy him a lot in dramas and keep wonder what was my problem with his looks then, because he is mighty fine. Fingers crossed for this drama.

LOL it's not shallow, @shach. I get distracted sometimes by facial features, too. Lee Jong-suk for example, there's something about his face that I can't quite explain that puts me off.

But, yeah, Yi-kyung looks mighty fine in the stills, and I can't wait to watch Sun-ah in a drama again (her more recent projects were not my cup of tea)! I'll give this series a try!

Same boat, I can't watch anything with Lee Jong-suk because of nose..... it just doesn't fit the rest of his face somehow.

Try watching the shows of Lee Jong Suk with an open mind-set has a knack of picking excellent scripts.I had the same issue earlier but really liked him post I can hear your voice.

Why? He has a cute round big nose and a big mouth. 😁 Some people find him strange at first...but when you see him again and again, you just start to realize that he is beautiful and charming and actually, he is very sexy.
He has sweet eyes, nice lips with Cupid's bow, amazing cheeks, thick eyebrows, his chin is sexy too...his body is attractive, his tighs are also sexy...you should watch him in his debut movie, White Night where he plays a gay character by the way 😅 but he's still so damn...😍.

He's also CUTE. Even his slight lisping is cute... 😄

As for talent he is amazing. I recommend everyone to watch Monsters where he plays a quite bad character...
I even find him sometimes creepy...lol...as if he has a kinda scary side. But I totally like this.

He's FUNNY af. 😂 But most people already know this. He knows and loves fun really, he's kind of person and really has a sense of humour in real life too.

I also love his PURENESS, I feel some such innocent pureness from his soul...I love his open-mindness, his vibrant energy, his FIRE.
And I know he's a honest and nice guy.
Well I just can't help but to think about him 24/7 recently.
I realized I love him so much..and I can't stop it seems. Even if people find it sillyness or useless, I just love him...even if he's far away now. For now...
I've never attracted and loved anyone else so much...

I share sentiment about Lee Jong Suk nose, it just doesn't fit his face and for me it's quite distracting, but I think he is great actor, who has amazing skill to always pick interesting drama so I'm always interested in his projects. I just don't find him that attractive.

If I like the goofy Lee Yi Kyung, it was time he tries something new :)

I agree with @tineybeanie I love Kim Sun Ah but I didn't watch her last dramas because I was not interested in the story.

Kim Sun-ah. I never liked her much until Woman of Dignity. That was a performance -- it deserved award recognition. It stayed with me long after I finished the drama. I see she's grown her hair out for this one.

I can't wait to see Lee Yi-kyung in a serious, meaty role. We all love his goofy characters, but getting more and more roles like that is a short way to becoming a silly sidekick permanently. It's nice to see that he's smart enough to break away from that, so that he doesn't become a typecast kind of actor a'la Ha Suk-jin. And leading with Kim Sun-ah? Hell yes.

My baby girl is here again.
Many years ago MNIKSam Soon opened the door of Kdrama land to me and because of that she has a special place in my heart. And also I’m a proud City Haller😍
I cried a lot while watching Should We Kiss First and based on this pic of Sun Ah, I guess I’m gonna shed more tears soon😂😭

Totally agree with you

I've like Lee Yi Kyung since I saw him in School 2013 and I've seen most of his dramas and movies even if he has a supporting role.

Happy to see him in a bigger role. Can't wait for good things to happen to his career!

I've seen Lee Yi-kyung do serious roles in cameos before and even if I like goofy men, Lee Yi-kyung seemed 3x hotter when he's being serious/evil. Hehe

Kim Sun-ah is Kim Sun-ah and awesome in everything! Though I've yet to watch Woman of Dignity. Thankfully, Netflix added it in our region. :D

oh Mary, Legolas in my mind is a handsome elf in shining armor :)

Legolas got kdrama-level of Flower Boy Hero treatment in the movies! XD

I loooooved Lee Yi-kyung as Jun-ki and thought I would find it difficult to picture him in a serious role 'cos he was such a memorable character.

But man, he is looking mighty fine (and hot) being all serious in the stills.. lol 😍

Been searching for a drama/movie of his where his role is serious instead of silly and funny, but non of them caught my interest until now. But darn me, it hasn't even aired yet! Am I willing to sit through another ungoing drama??

Yay!!!! Don't we all love it when second leads break out into lead roles? 😃
Oppa Ji Soo.. we are waiting🙏

Is this some kind of 'Queen of Mystery?'

i love 'Triangle' and 'Achiara'

I think I wanna watch this. THE Kim Sun Ah's Woman of Dignity is so great.

I, also, didn't watch Kim Sun Ah's recent dramas due to lack of interest in the story. I'm glad she is leading in a story that looks interesting to me. Looking forward to Lee Yi Kyung, who is always fun to watch regardless of the role type.