Premiere Watch: Mama Fairy and the Woodcutter, Happy to Die 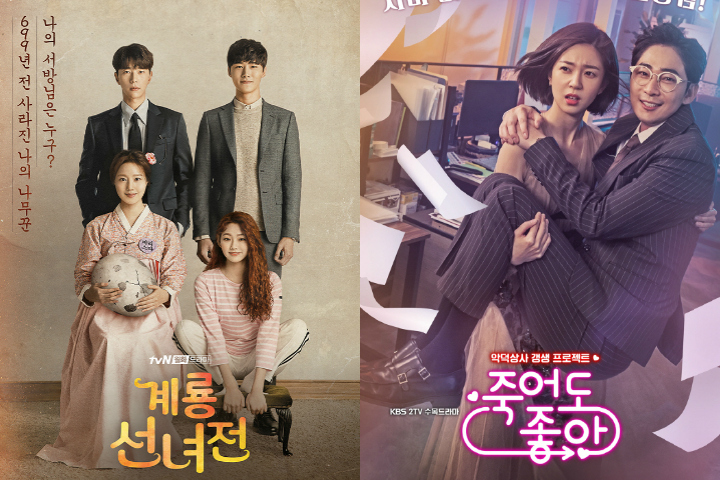 November is starting off with two new dramas that are both webtoon adaptations with fantastical elements in their storylines. Some funny and light shows are the perfect balance to all the melos that will begin airing soon. 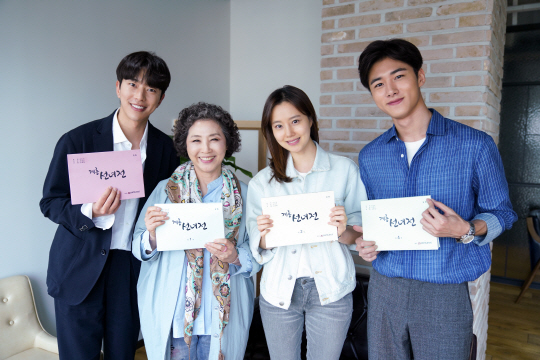 Reasons to watch: Moon Chae-won stars as the titular fairy in Mama Fairy and the Woodcutter. The drama is adapted from a webtoon that is a satirical — and less icky — take on a famous Korean fairytale, “The Fairy and the Woodcutter.” In the drama, our fairy is 699 year old and has been waiting centuries for her husband to return to her. While waiting for her husband’s reincarnation, she’s become a barista and lives with her shapeshifting daughter and reincarnated son. The two possible candidates for her reincarnated husband will be played by Yoon Hyun-min and Seo Ji-hoon. Though the fairy’s true form is that of a young, beautiful woman, she appears to be an elderly woman to most people. Go Du-shim will play the fairy’s older form while Gugudan’s Mina will play the fairy’s shapeshifting daughter. Mama Fairy and the Woodcutter looks like it will be a quirky, fantastical treat and a good source of fluffy rom-com cuteness for anyone suffering now that 100 Days My Prince has ended. 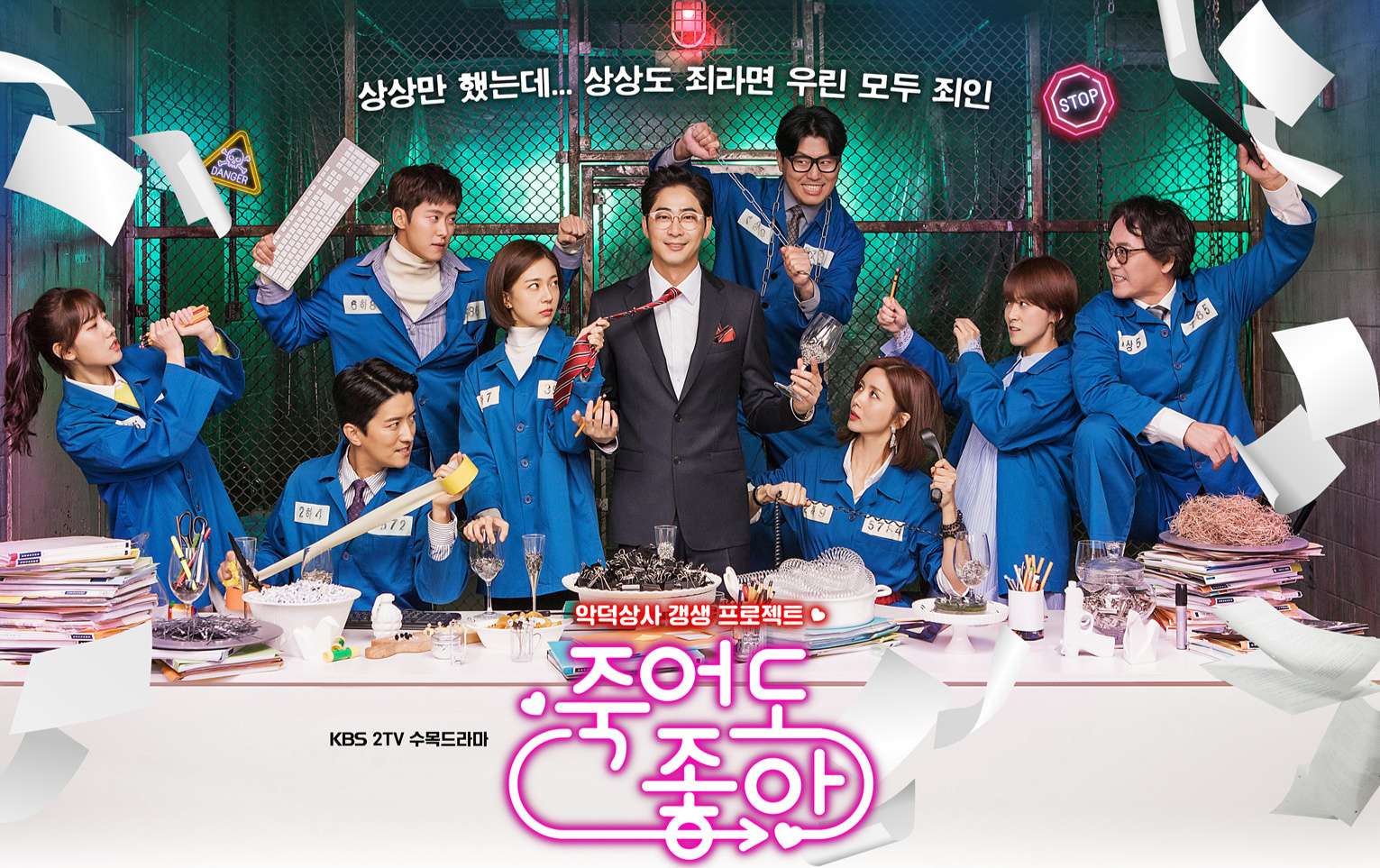 Reasons to watch: Happy to Die is an office drama starring Baek Jin-hee and Kang Ji-hwan. Baek Jin-hee plays an office worker who finds herself trapped in a time loop. She’s forced to relive the same day over and over. There’s one way to break the time loop — save the life of her loathsome boss, Kang Ji-hwan. As with most things, this is easier said than done as it seems everyone in the office has it out for the boss. Even just the thought of wanting Kang Ji-hwan dead is enough to result in his death. With everyone, including Baek, harboring murderous thoughts, Kang is destined to die unless Baek finds a way to save him. I love black humor and the office drama genre; with the added fantasy element in play, my expectations for this show are high. Fingers crossed that the show will deliver.

I'm ready for tons of cuteness and quirkiness in Fairy and Woodcutter. And if DB is going to recap Happy to Die, I'll probably follow it from recaps for the black humor.

uhh, from the description of Fairy and the Woocutter we don't know who the main lead is yet.... (are am I misinformed?) Might have to sit this one through... (*APAD traumatic flashes in my eyes*)

Don't worry, I watched the extended trailer - they make it quite clear so the lead is. 👍

I just really REALLY want Fairy to be good. I love both MCW and YHM so I want to enjoy this. Come on drama gods!!

4 Cocoa, The Fake Poet of February

Really, you're still on a slump? I'm in Drama heaven right now especially on Wed-Thu. haha!

I also want to check both!

Just watched some of Fairy raw. So am I right? This is a CGI kitty, correct? I almost had 2nd lead syndrome immediately until I realized looked up what else Yoon Hyun min had been in - oh, right, I like this guy.

Both of these look fun and quirky!
I hope both shows will be recapped here. ^^

These are the shows I'v been waiting for. Especially Happy if you Died...

Especially Happy if you Died...(DF). Doesn't look like Viki will pick it up unless it's last minute. And this is one I really really wanna watch. Maybe raw on OnDemand?? Another illegal site? (And they wonder why we watch on illegal sites).

If only there was One site to rule them all (at a price we can't refuse...)

Unfortunately it seems things are going the other direction. Everyone wants a piece of the drama pie. Did the U.S. start this trend? Streaming services divided into so many parts, each one demanding a price for their shows alone.

On Demand has some subbed dramas. I wonder if this one will be. In the US I saw that Kocowa should have it.

Where on Kocowa did you see it? I've searched and can't find a thing on Kocowa. On Demand doesn't seem to sub newer dramas but you never know...
And now that I've found Chinese dramas, they're harder to find subbed. Viki does (thankfully) have Ever Night, which so far is so so good.

I saw several teasers under "Coming Soon" so I think they might have it. They're calling it Feel Good To Die.

@ndlessjoie I finally found it in Coming Soon on the Kocowa site. If they have it with ads I'll watch. If not, forget it. But I wonder if you sign up for the beta test if you get to watch it on Roku. That would be tempting.

As for Ever Night, can you imagine that level of cinematography for a webdrama? It's mind blowing.

Kocowa isn't for those of us who live outside the US (and maybe Canada?), nor is On Demand...
*sigh*

I tell ya, Yoon Hyun-min is one good looking dude.

I love how Yoon Hyun Min and Baek Jin Hee are soulmates in dramaland haha. I’m excited to watch both shows and hopefully they’re both fun and quirky

Dropped: Fairy/Woodcutter. Not that it was bad so much as it wasn't good enough when you have limited time to watch and have to be choosy. Maybe later.

I might watch Fairy because I like Kang Mina, who was on Produce 101 and then IOI, and yeah of course Gugudan. She has some acting experience too, but still I like her :)

The first episode received positive reviews. I have the feeling this is hidden gem of this drama season.
I really hope that more people will know about this slice of life drama.
Love the main couple. Their chemistry is lovely. I really like both of the actors especially I am so happy to see Hye Young back to dramaland. Really love her in Reply 1988.

Have watched the first ep of Mama Fairy and the Woodcutter, and will be watching the 2nd tonight. I'm really loving it so far. I thought it would be annoying at first and really not my thing, but it grows on you very quickly thanks to its quirky streak and a big bucketful of charm. The leads are great with Yoon Hyun Min and Seo Ji Hoon playing off each other brilliantly and I should say that I am slightly in love with Moon Chae Won, but that's not to forget that Go Doo Shim does an equally lovely job as her older-appearing self. Kang Mi Na has an amazing role as the feisty tiger with lewd thoughts, and I have to give mention to Ahn Young Mi in a great support role. Lots of charmingly cheesy (but fitting and effective) special effects too.