The queens and kings of JTBC’s SKY Castle 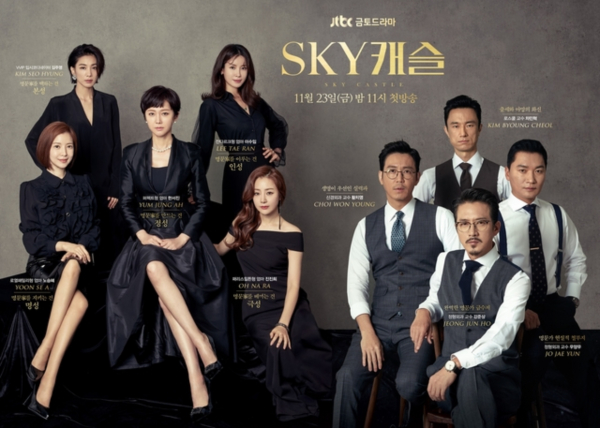 JTBC is gearing up for the premiere of its new drama SKY Castle later this month, and the show has recently released several teasers to whet our appetites for what I hope is an epic battle for power and prestige among this elite group of couples. This is definitely one helluva cast, and I’m looking forward to watching these actors duke it out on screen.

In the first teaser, we have our four “Castle Queens: in Yeom Jung-ah (Mirror of the Witch), Lee Tae-ran (Make a Woman Cry), Yoon Se-ah (Just Between Lovers), and Oh Na-ra (My Ajusshi), followed by Kim Seo-hyung (The Great Seducer), who plays a university admissions consultant for VVIP clients. Kim Seo-hyung narrates the teaser, as the smiling faces of our female leads appear on the screen: “SKY Castle, where Korea’s 0.1% elite live together. In order to rise even higher, endless greed spreads its wings.”

The second teaser follows the same format, except with the male counterparts. Jung Jun-ho (Flower in Prison), Choi Won-young (Fox Bride Star), Kim Byung-chul (Mr. Sunshine), and Jo Jae-yoon (Heart Surgeons) either glower or smirk at the camera as Jung Jun-ho tells us that SKY Castle is where “everyone wishes to live, but also is where not just anybody can live. One man’s hidden ambition started there.” We don’t know which man Jung Joon-ho is referring to, but I have a feeling there won’t be a shortage of ambition going around with these characters.

This kind of setup feels more familiar as a sageuk, and it’ll be interesting to watch the queens hold court in their SKY Castle. On top of this rather formidable cast, I’m excited to see the behind-the-scenes talent, with PD Jo Hyun-tak of Mirror of the Witch and Daemul in the director’s chair and Gaksital writer Yoo Hyun-mi penning the script.

SKY Castle will take over JTBC’s weekend slot from The Third Charm on November 23.

The casts made me want to check this out. The teasers made me feel like it is going to be dark? that moving light across their faces (which is beautifully done btw) made it look like their facial expressions are changing,
like something hidden deep down is slowly unwraping itself.
Any beanie who watched Gaksital?
I want to know what I can expect from Writer-nim.

Any beanie who watched Gaksital? I want to know what I can expect from Writer-nim.

Pain. Lots of it. The good kind.

Gaksital is in my all-time favorite drama list, so I'm also piqued that the same writer will be doing this drama.

But then again, Gaksital had excellent acting and very good directing as part of the whole package, so I'm not sure how much credit I should give to the writer.. hehe

The teasers remind me of the technology behind the Valkyrie war in Ragnarok. It's awesome! https://www.syfy.com/syfywire/thor-ragnarok-used-amazing-new-tech-to-show-off-valkyries-battles

But I doubt JTBC spent $$$$ for the teaser alone. They probably just used a similar concept with the fast-moving lights. >___< Unless someone who lives in SKY Castle actually funded this show...

What I thought of when I saw the teasers was that viral post about how lighting and shadows can change how a person looks. Shifting impressions from different angles. But it's cool, nevertheless.

Wow, what a cast!
And all these badass women! 😍
I hope the drama is as good as the team

I'm not interested by the story but all those actors O_O

“This kind of setup feels more familiar as a sageuk, and it’ll be interesting to watch the queens hold court in their SKY Castle.”

Agreed!! My first thoughts was that this reminds me of all the concubines and mistresses of the Chinese harem that dukes it out behind the court in the Forbidden City all those centuries ago

This is the type of story I would not watch but... THE CAST !!!!! I might need to check it out. Also looks like JTBC put some money into it.

Aww, I see a lot of familiar faces - of those who've been playing secondary characters a lot in other dramas. It's kinda awesome to see that they'll be part of the main ensemble cast this time. I hope this does well

Ooh what a cast! I'm hoping they are given some really good material to work with. Surely with the name Sky Castle, there has to be some reference to Game of Thrones.. I might actually die laughing if one of the characters ringtone is the soundtrack.

Hmm, an epic battle for power and prestige ...... that battle can certainly go in so many directions!

I get the sense there will be mysteries and secrets and/or characters hanging by a thread as they may only be keeping up appearances.

This looks slick with an excellent cast, but not my cup of tea.