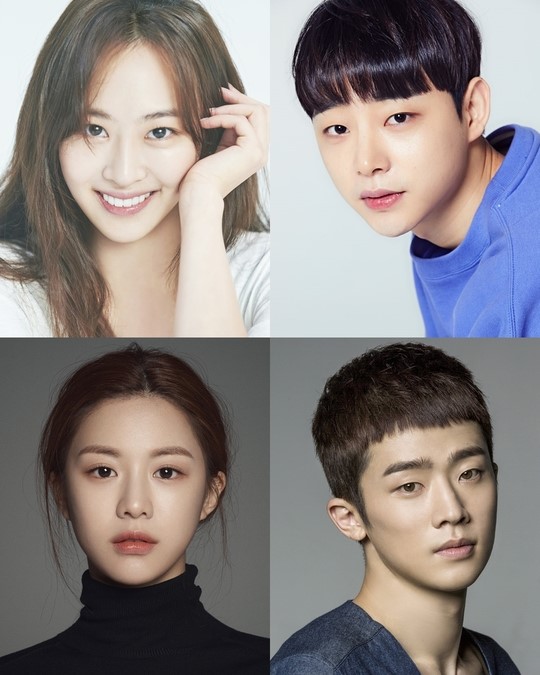 tvN has added a number of fresh-faced rookie actors to the cast lineup of their new rom-com That Psychometric Guy. Joining Jinyoung (School of Magic) of idol group Got7, will be Dasom (Sister Is Alive), Noh Jong-hyun (Life on Mars),  Jang Eui-soo (Beauty Inside, the film), and new actress Go Yoon-jung.

Jinyoung has been cast as the lead, a guy named Lee Ahn, who has the psychometric ability to read people’s hidden secrets by touching them. His costar is Shin Ye-eun (A-TEEN), she will be making her TV debut as Yoon Jae-in – a highly guarded young woman who would rather die than reveal her hidden secrets and scars.

Jinyoung actually first caught my eye back on Dream High 2. He was green, but he stood out as one of the few cast members whose acting was somewhat natural. (I still somehow watched the whole thing because that’s the power of Park Seo-joon apparently.) However, Jinyoung doesn’t yet have a lot of experience and the cast in general for That Psychometric Guy is quite new. Still, tvN has proven in the past, particularly with their Answer Me series, that new can be a good thing. I’m putting my trust in you, tvN!

That Psychometric Guy is currently planned to air in the first half of 2019 on tvN.

Ooh Shin Ye-eun's acting was pretty natural in A-TEEN and I think she will match visually with Jinyoung :) hwaiting! not enough youth dramas lately (other than Dance Sports Girls)

Yay! I quite liked Shin Ye Eun's acting in A-teen so I'm looking forward to her here. Jinyoung will always have a special place in my heart. The first time I saw Dasom act was in Byul byul myonari (Can't remember the English title, something something daughter-in-law). I liked her in that one.
So far 2019 dramas list is looking promising!

Thanks for the update on Jinyoung's drama!

Jinyoung has been in more stuff! He was in a feature film (a stray goat). Childhood version of Lee minho in legend of the blue sea and in my love Eun-dong. Even if I am a fan, I think most people agree he usually does a good job. Looking forward to the drama

Go Yoon-jung will be playing an outsider named Kim So-hyun.

What? Does she play a talented young actress perhaps??

I'm a little nervous about this just because the cast is so green. But I'll give it a shot when it airs.

it sounds interesting. i will give it a watch.