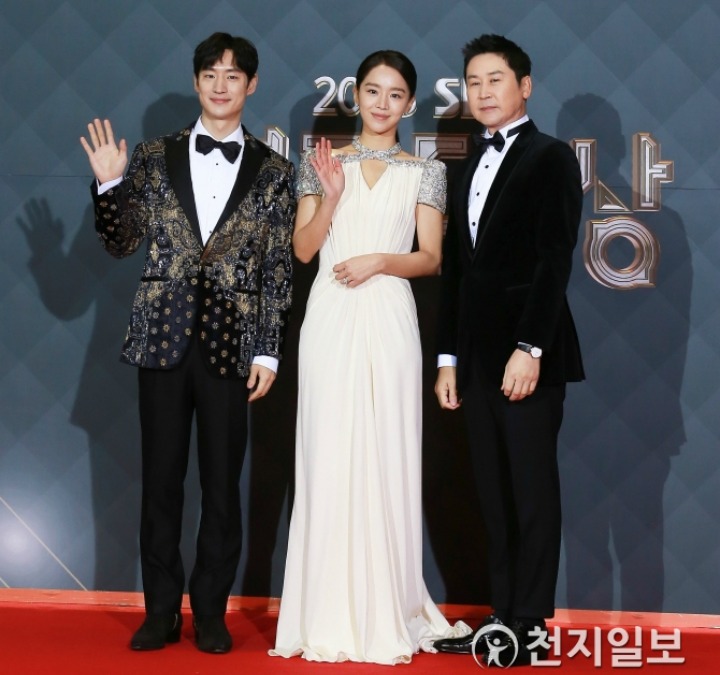 The SBS Drama Awards, the last awards show of 2018, took place in Seoul on Dec. 31st. SBS had three emcees for the evening, Lee Je-hoon, Shin Hye-sun, and Shin Dong-yup. Lee Je-hoon and Shin Hye-sun headlined two of SBS’ big dramas, Fox Bride Star and Thirty But Seventeen respectively, so the two scooped awards in addition to emceeing. For actors, I’d imagine that there are few things better than ringing in the new year with an award recognizing your work. This year’s Daesang had two winners, Kam Woo-sung and Kim Sun-ah for their work in Should We Kiss First. Though they’re both great actors, I wish networks would stop splitting the Daesang. The award feels a little diminished when there’s more than one Daesang winner.

Though I understand the desire to award as many of their dramas and actors as possible, SBS (and KBS) dividing the awards categories into Monday-Tuesday and Wednesday-Thursday dramas comes off a little desperate. Hopefully this is just a one-time experiment in how they organize the categories.

On the fashion front, white was the color of the night for the women but there were quite a few splashes of color and beautiful dresses. Though black suits reigned among the men, a trend of colorful velvet suit jackets seems to be emerging. Not totally sure how I feel about that, but it’s nice to see some color here and there. May 2019 bring bold fashion choices to the awards shows! 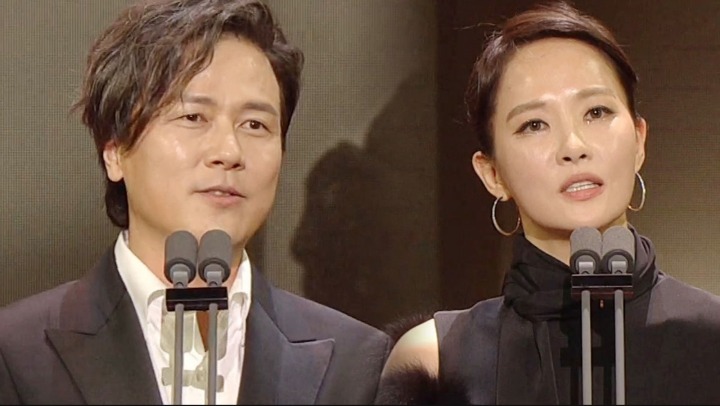 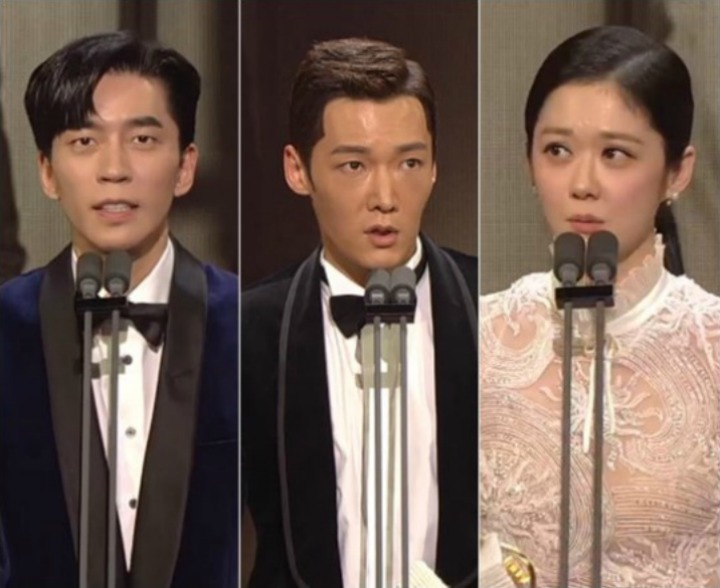 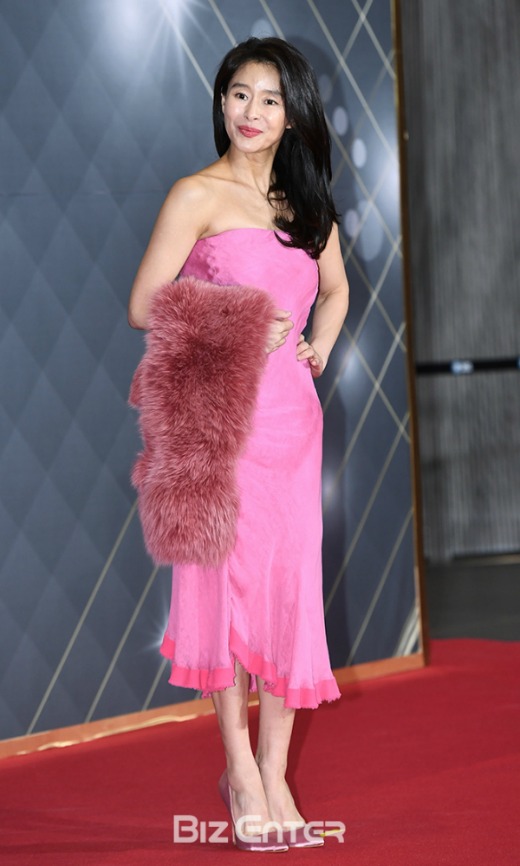 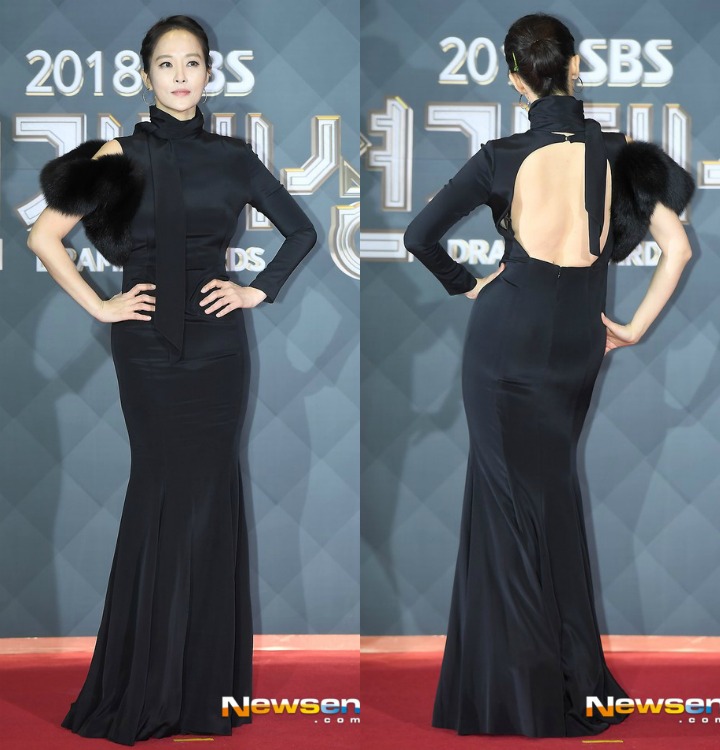 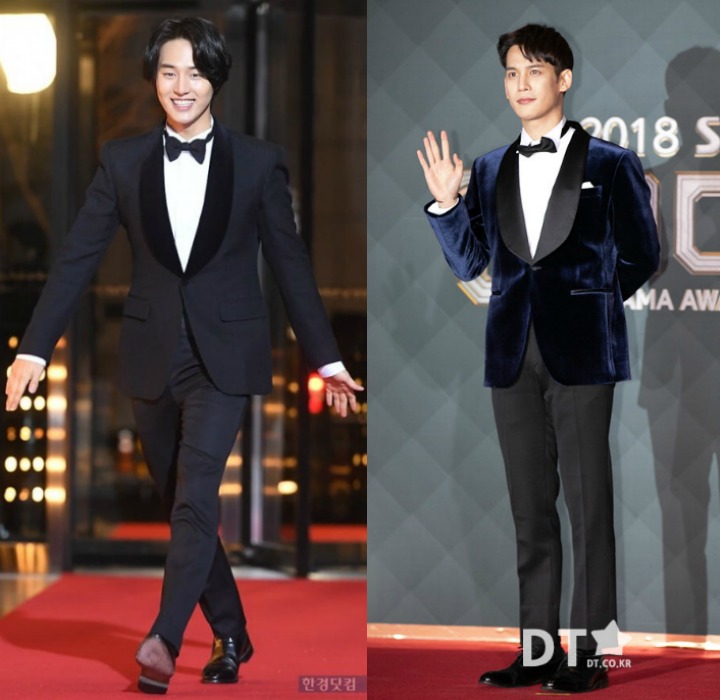 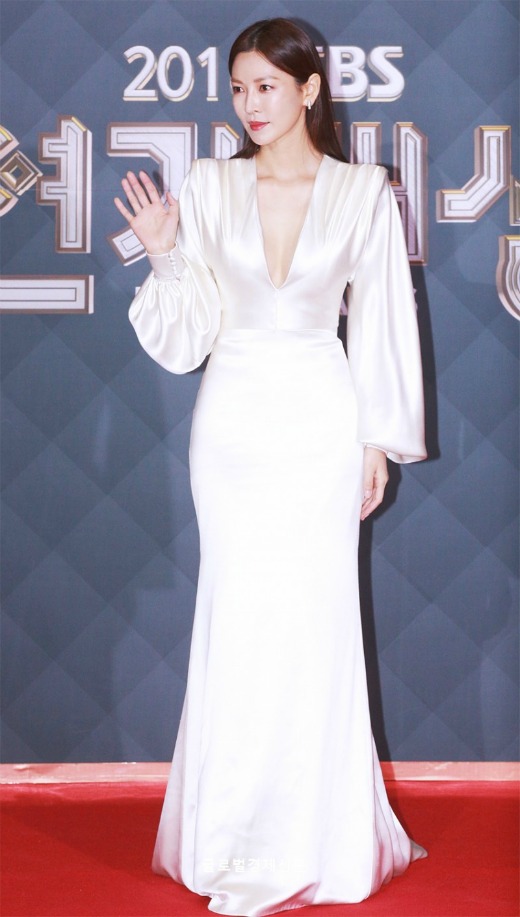 It's so nice to see Kim Sun Ah looking glamorous and not like poor, traumatised, Woo Kyung in Red Moon, Blue Sun. Although I like the gold design on Le Je Hoon's jacket, I'm also not too sure the velvety look is the thing that should be in. And I like the cross shoulder cap sleeve detail on Shin Hye Sun's dress!

Great to see Kim Sun-Ah and Kam Woo-Sung as joint Daesang winners for their fully deserving coupling performance in Should We KISS First!

While the drama left a lot to be desired, this couple got my 110% attention whenever they are on the screen together. It is so romantically magnetic that younger actors and actresses can’t pull through.

I’m all for your last sentence.

I didn’t watch Fox Bride Star but having read the discussions on a fan wall I feel like it’s a bit a stretch to award it as a best drama.

I'm glad you said it. Destroyed my faith in the other winners. Except for the cast of Last Empress. Return was terrible.

Ikr? Fox Bride Star doesn’t deserve “Best” anything. Even the leads weren’t the best choice despite how much I like them.

I think whoever awards these awards must have also read @justme 's true ending of FBS. It's the only explanation.

Yang Se Jong on the carpet IS SO CUTE HE'S JUST LIKE A PUPPY T_T
Also love love love Yeh Ji Won in that bright pink dress and Kim So Yeon is so gorgeous... please bring back awards ceremony fashion commentary! hehe

Sincerely congratulations to Chae Soo Bin, despite FBS disappointed ending, I still love your acting. Hope you'll have better drama/s this year and fighting for your movie Who is Rose

okay but where can I get Lee Je Hoon's jacket? I need 50.

YEH JI WON I DON'T KNOW WHO YOU ARE BUT BLESS YOU FOR WEARING BRIGHT PINK.

Jokes I do know who she is I just didn't know her full name and didn't recognise her... well this is awkward

@geliguolu sph_7 I should have said the same!!! LOL!

her pink dress reminds me of her character in "Should We First Kiss" as KSA best friend. I JUST LOVE HER...

If I'm not wrong, I think known actors can choose their own outfits for their drama characters, which explains how her character in SWKF wore daring ensembles. I remember a picture of her at the airport wearing a classy black outfit on her way to shoot the variety show "Law of the Jungle" lmao

Ah... that's making any sense then.. Just googled her, and found several of her pictures wearing daring red dresses in her Wikipedia profile, LoL.

Just remember, she's in "My Wife is Having an Affair This Week" too, and she's super elegant with her outfit there.

I miss @javabeans comments on the stars' wardrobe/makeup/hair choices for these award ceremonies. They were so fun to read!

Did Shin Sung-rok get an accident in the film set of "The Last Empress"?

He broke his toe on set previously huhu

I'm happy for Lee Yoo-young! She was good in Your Honor.

One thing that caught my eye though is the Best Drama. Lol. I watched Fox Bride Star and loved it despite its flaws but I don't think it deserves the best drama. Hmm.

Okay, everyone I like got an award, I'm happy.

(Yang Se-jong looks like a happy child going to a picnic in that picture! 😍)

I usually scoll fast over the list of the winners but i have to get defensive here. How did they come to award Fox Bride best drama when they have Should we Kiss first! SMH

I guess they changed the winner after they saw Lee Je Hoon in that jacket. There is no other explanation. His cute haircut couldn’t be ignored too.

It’s the first time I’m not upset over the Daesang being splitted between two actors because I loved these two in Should We Kiss First? soOoO damn much and I’m so happy they shared this beautiful moment with each other but as much as I love Kam Woo Sung’s face and hair here, can I get my Son Moo Han’s look back? 🥺 For fox sake man what did you do with that gorgeous hair?!

Yeh Ji Won is the prettiest!! The pink color is just perfect..

Is white a favorite color for special events in Korea? It's the first time I see photos of awards ceremonies and most of women and little girls wear white dresses.

Very happy for Ahn Hyo Seop. His speech was so adorable as he was incredibly nervous.

The Three (rowing) Musketeers from Thirty But Seventeen also performed a special stage of g.o.d "One Candle" including a violin solo of Also Lang Syne from the talented Ahn Hyo Drop. The whole performance was excellent and so much fun! Here is a link for the performance on Instagram:
https://www.instagram.com/p/BsDr5XJhWYk/?utm_source=ig_share_sheet&igshid=1qrprv87t30cy

Thank you very much for posting this information about SBS Drama Awards. I could not find it else where.

YouTube video of Ahn Hyo Seop, Lee Do Hyun and Cho Hyun Seok's performance at the SBS Drama Awards. Their stage name is BTS (Boys on The Ship 배탄소년단) :-D

KSA looks stunning
The dress is super awesome
Loved SWKF to the extremes
Hope to see her again with KWS
PS where did your SWKF gorgeous hair go , KWS😢😢

You don't know how long I've waited for this moment. Dramabeans, I'm hoome!^^