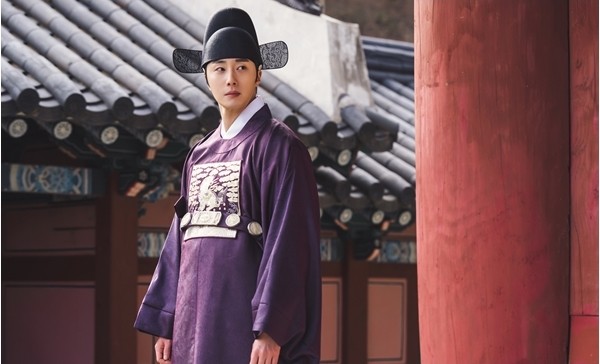 New stills for upcoming sageuk Haechi have been released. From the descriptions, it sounds like a coming-of-age legal drama in a historical setting, with all the delicious royal intrigue and trappings of power typical in a sageuk. Jung Il-woo (High-End Crush) stars as a troublemaking Joseon prince who eventually learns about love and true friendship.

Haechi will tackle the topic of good and evil in different groups of people amidst the background setting of the Joseon Saheonbu investigative bureau, which is the modern-day equivalent to the national prosecutorial department. Go Ara (Ms. Hammurabi) and Kwon Yul (Voice 2) can also be spotted in the stills below, and they are part of Jung Il-woo’s support on his path for justice.

This drama is based on the story of young Yeongjo (given name: Yi Geum), played by Jung Il-woo, who began his life as a princeling who could never become king because his mother was a common-born slave. Despite his fame as the tragic Crown Prince Sado’s father, this is the first time King Yeongjo is front-and-center in a mainstream drama. 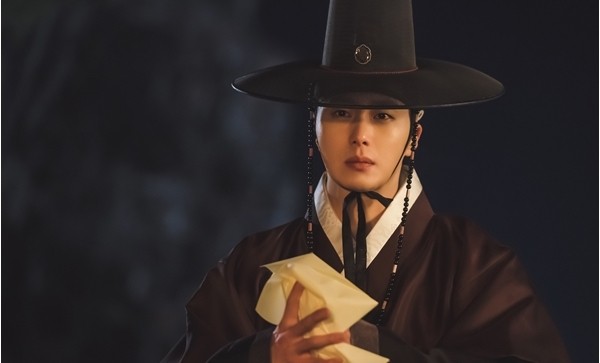 The writer on this project is Kim Yi-young, who has had extensive experience with sageuks from Yi San to Dong Yi to Horse Healer. Jung Il-woo is no slouch in the sageuk department himself, having starred in The Moon That Embraces the Sun and Dramabeans favorite Return of Iljimae. Speaking of that legendary thief, Haechi PD Lee Yong-seok (Secret—Village of Achiara) also directed a different sageuk called Iljimae in 2008. It’s funny how it’s all interconnected.

Because Haechi is his first project since his military discharge, Jung Il-woo lost 14 kgs to prepare for this role, and at one point, he had weakened to a point where he was afflicted with cold sores around his mouth. He said about the first film day: “My heart is fluttering, and I am happy to return, after finishing two years in the military, to such a good project like Haechi. It feels like I’m returning home after a long journey. As I have returned to my calling as an actor, I will throw my whole body and heart into filming.”

SBS Monday-Tuesday drama Haechi will begin airing on February 11, following the end of My Strange Hero. 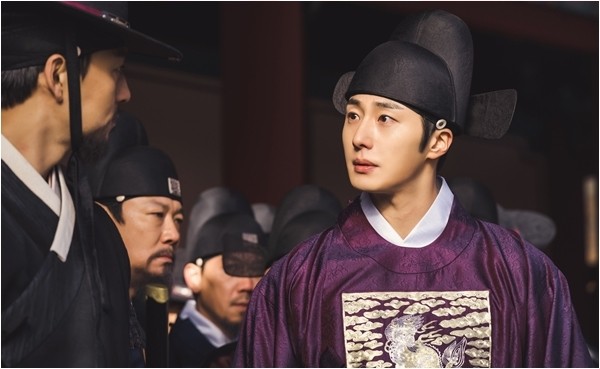 I have so many reactions to this:

Reaction #2: Lost 14 kgs? O-O How? While it clearly sounds unhealthy if he's got sores and things, umm...I can barely manage to lose a kg. How?

I am also so in GF! I also love sageuks. So many sageuks this season 😍😍😍

I think he got herpes, it was clearly unhealthy.

Yeah...cold sores are not something I would want to have the media know. Cold sores = herpes. Maybe this is just inaccurate translating.

It always makes me wince when celebrities lose so much weight in a short period of time for a project(or comback, in the case of singers). So unhealthy. I hope he's taking better care of himself.
I wasn't sure about this drama because the writer's last drama was, you know, hwajung, but after seeing the 2nd teaser I was pleasantly surprised. It looks darker and more serious overall than her other fusion dramas; almost gave a traditional KBS sageuk vibe. I hope kim yi young can pull it together this time, especially towards the end(where her dramas tend to taper off...). And that go ara does a decent job...

i have the same thought regarding his weight loss. when he was in his military service he did a appeaarence and ppl were very nasty with his looks. saying he was fat or had plastic surgery.
the fact his agency (with his approval) release this statement about his health. it make me wonder that he's still not very well and soon as press conference will be held the journalist questions about his appearence are alredy justified.
idk, something about avoid what happened with Kim Jung-Hyun who had to leave the show in the middle due heathy issues. i I hope now he's revocering well.

But i do hope tha Jung Il woo is really well since he already has another healthy issues.

Good, Crowned Clown will be wrapping up at that point. ‘19 has a good start for sageuks.

The episode count is 48 eps or 24 hrs worth. That’s a lot of ground to cover. I hope they plot their story wisely and wish the best to cast and crew.

That's short for kim yi young though. Her previous dramas have all been 50+ 1 hour episodes. So having this half that length may improve her pacing.

YI SAN was the only drama of hers that really got me invested. One of the rare sageuks to learn history from because she pretty much take most of it from the annals of Joseon.

Yi San gives me the feels along with Jumong, lol. Romance in sageuks done tastefully. A bit odd that she did her best work, and such a long and heavy drama at the age of 32(!) and her dramas have uh, dwindled, not improved since then. Well, she's certainly not untalented. I'd usually run screaming in the other direction after a writer makes something like hwajung, but there's so many people i like appearing here, and like you said, haechi just sounds and looks(not gonna lie, that 2nd teaser got my hopes up a little too high) so much better so...fingers crossed, haha.

Ikr? It was more than just a filler to pull in the female audience.
I think it's difficult for writers to stick to their own ideas and creativity because of the pressure from the network executives etc.
Song Ji-na wrote 2 back to back masterpieces early on in her career but then she went downhill.

Agree that Kim has talents and here is hoping for a repeat of YI SAN and not HWAJUNG.

From what I can gather HAECHI is not preproduced. In 2018 SBS reduced the episode count from 40 to 32 for two dramas (at almost the same time): YOUR HONOR and 30 BUT 17. I don’t know if you can take 48 episodes to the bank (so to speak).

I love Go Ara in REPLY but she is always out of her element in sageuks. Did they not watch her in HWARANG?

I'll be forever in love with Yeo Jin-goo's Yeongjo so hopefully Kim Yi-young will take this Yeongjo in a very different direction.

Go Ara was quite good in Ms. Hammrabi with L from Infinite. The script of Hwarang was really bad, even their bromance was kind of meh. I do not recall the story at all even I have watched the drama!
I should have a low expectation for Go Ara then she might surprise me, i hope.

Yeah, from what we've seen so far she doesn't suit sageuks, but to be fair the script for hwarang was horrible and her character in particular wasn't written well. As much as I don't really trust kim yi young, I think she can do better than that at least.

I agree that the script was terrible and it was for everyone else too.
Seo Ye-ji on the other hand still shines through that terrible uneven script and that's what good actors do. Make a terrible script decent on screen.

I agree. The best of actors can make a terrible script shine and sometimes make even poorly sketched characters come alive.

I can stand a lot of bad to get my cute, and Hwarang was overall so forgettable despite all the pretty. I still remember the moment I pressed "stop" for good was during possibly Go Ara's 5th sobbing scene. I just had to end my self-imposed suffering.

I did regain my faith of her as an actress in Miss Hammurabi even though as a newbie judge she was quite insufferable for me in the beginning but eventually rooted for her character.

I will cheer for your sageuk success this time, Go Ara-ssi!! Fighting!

True, although with a bad script I just can't keep watching anyways because it's boring and simply terrible that everyone in it just annoys me, lol. On the other hand, decent/good writing can elevate an actor, like shin se kyung with kim young hyun(no, I don't expect kim yi young to be on her level script wise but you get the point).

that's my question too.

I feel like Hwarang didn't do most of the actors there any justice though it did give all the Hwarang guys a bunch of new friends. I'm not sure if Park Seo Joon will ever get another sageuk offer soon nor would he want to attempt another one.

I actually really like Go Ara. But I feel her voice is too modern and distinctive to really blend into the sageuk realm. I hope they keep any romantic elements light or, better yet, non-existent, and just focus on the justice part. I hope I can fall in like with Kwon Yul in this, since I haven't been able to warm up to him before.

Love everything about this. I’m starting to make my watching schedule for the year and I think 2019 will be the year of sageuk’s, which I love.

Welcome back ！！！As I always say, there are tons of good looking actors out there but only handful actors possess elegance /nobility like atmosphere like him. That is why I like him in historical drama. He looks so elegant in hangbok.

Gosh, he has one of the most striking profiles I’ve ever seen. But I miss him with his mane of glory he sported in Return of Iljimae. He was just breathtaking beautiful there.

Oh! I didn’t know Kwon Yul is in it too! He’s been awesome in everything I’ve seen him in. I’m not a huge fan of Go Ara, but I’m tuning in for JIW and Kwon Yul.

Ooh. Jung Il-woo does sageuk very well. The Return of Iljimae was my very first sageuk drama! So I am excited for this venture.

However, Go Ara better step up her game and her eyebrows for this! Her role in Hwarang is like a bad memory.

Oh my sweet, Jung Il Woo! This isn't one of the Joseon Kings i like but since this is his season, i shall of course be watching. I can never give up a sageuk. Well, rarely. Thanks!

The stills have a quite gritty look to them. It'll be interesting to what the final tone of the show is. I love Sageuks! So definitely looking forward to watching this one!

King Yeongjo is Dong Yi son, isn't he?
I like Dong Yi drama and had a glimpse about prince Yeongjo but I was surprise when I found out later that he is the one who lock his own son (Prince Sado) until death in the rice box. And the writer is the same btw, seems promising.

Yup Yeongjo was Dong Yi's son (Choi Suk Bin). Honestly he should be called Prince Yeoning at this point

Oh boy, I'm getting a lot of Hwarang vibes from Go Ara

I hope she does well, that's all I can hope for

When I first heard about this drama, I was expecting a fusion sageuk that is really more like a costume drama (like Hwarang and Night Watchman), but it sounds like it's going to be more interesting than I thought. I'm not sure why jung Il Woo's role would require losing 14kg. He's playing a prince and not a peasant!