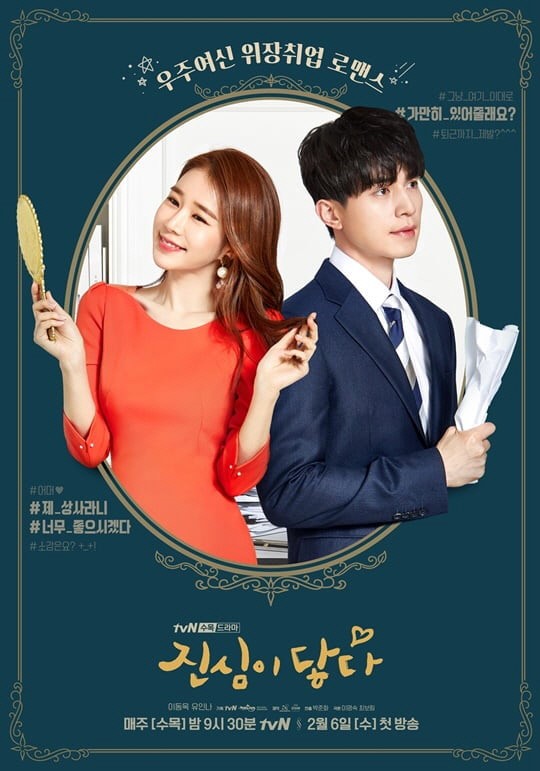 I love a good bickering-their-way-to-love romance, and we know that these two actors have the chemistry in spades to pull off a particularly fun iteration of that drama trope. Reach of Sincerity has released two character teasers for our leads Lee Dong-wook (Life) and Yoo Inna (The Lonely Shining Goblin), and I really like how the show drops us right off with the two in mid-bicker.

First up is Lee Dong-wook’s Kwon Jung-rok, whose teaser starts with him strutting his stuff as we see his profiles printed in newspapers, telling us that he has a case success rate of 90% and that he was awarded 2019’s Lawyer of the Year. His law firm is known for its winning streak, and he is their star attorney. So, basically, he’s a genius, high-flying lawyer. Of course he is.

The papers all wonder what case Jung-rok will take on next, and hilariously, it sounds like it’ll be against Yoo Inna’s Oh Yoon-seo, a Hallyu actress who has gone undercover as Jung-rok’s secretary in order to get experience for a film role. Jung-rok announces to the gathered reporters that he’ll be suing Oh Yoon-seo for fraud and demanding compensation for emotional distress. That prompts Yoon-seo, who is watching the announcement on her phone, to declare that she will destroy him.

Yoon-seo’s teaser starts with a series of black-and-white shots of her in the middle of a photoshoot, when she’s asked what her next role is. She answers that her character is a tragic heroine who suffers under Kwon Jung-rok’s psychotic perfectionism. In a reversal of the previous teaser, Jung-rok watches her interview on his computer, and slams his hand down on his desk, as he declares that he will take this all the way “legally.”

Reach of Sincerity will follow Boyfriend on tvN’s Wednesday-Thursday slot, starting on February 6.

That mole in the first teaser had cracked me up XD
I can't waiiiittt....

😂😂 I'm not one for legal dramas but this is clearly a rom com. Definitely checking this one out.

So they know of each other!!
It would be difficult to believe Lee Dong-wook is a genius lawyer if Yoo Inna is disguising herself undercover in the typical drama fashion with a pair of lenseless glasses and few strategically placed adorable freckles.
Oh did that make me sound like I won't watch due to potential logic fails? Haha no. I am giddy with anticipation for all the cute.

She's obviously a GENIUS actress and master of disguise. Alternative solutions are that he's got face blindness, or she could pretend she her own long-lost sister.

I was just thinking that the plot sounds dubious which (if past viewing experience is anything to go by) means I'll probably get totally addicted to it.

Perfect, @cloggie! Since justice supposes to be blind, face blindness undoubtedly makes him geniuser as a lawyer.

Im hoping they make a few self aware jokes about that. Him going arent you that big actress? She going: " how could i be? I have freckles "

Omo! This was hilarious! I’m REALLY looking forward to this!

This show still feels miles away. I can’t wait till it airs already

I’m soo excited for this show!!

You who Came from the Star but instead of aliens we have a Lawyer, Ugh! HARD PASS!

It's so hard not to get excited over this!

No matter how hard I try to watch Yoo Inna I still can't get that Two-faced Frenemy of Cheon Song Yi's out of my head.
Whatever role she plays, she looks the same to me

But I still can't resist to see that beautiful Babyface of hers.

@tipsymocha 'so basically, he's a genius, high-flying lawyer. Of course, he is' 😂😂😂

Wahhh never once disappointed with tvN’s Wed-Thu slots! Hope this one will be good too!

I love these two so much! Can't wait for this!

i am actually super excited for this since i both think their acting matches and they're cute on screen (never will finish goblin, but i liked them.) but god i really just wish for once that in romcoms the women could be like more than actresses or something that won't intimidate the others. the mirror in that poster is annoying. i looooove her so much tho

Definitely checking this out for Dong Wook and Inna. Hopefully it holds my attention!

Yoo In Na! The star in my heart <3! Love this lady and can't wait to have her on my screen again smiling without even realizing.