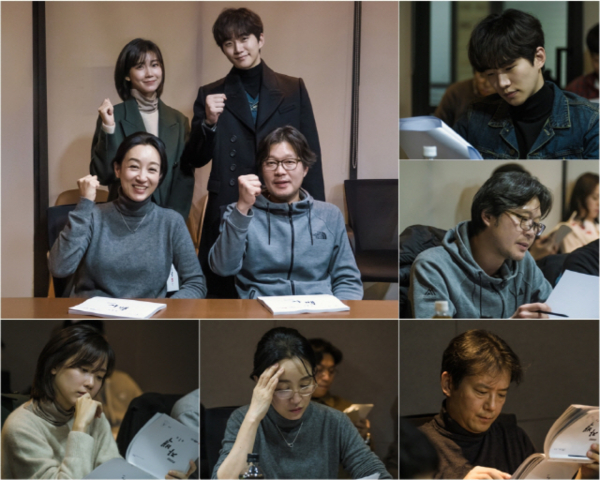 So many reasons to be excited for this one! I’ve pretty much loved Yoo Jae-myung (Hundred Million Stars From the Sky) in everything I’ve seen him in, so I’m excited to see him headlining tvN’s upcoming Confession, alongside 2PM’s Junho (Greasy Melo). The whole cast of the tvN show recently gathered for a table reading, and the production has released the stills in anticipation of its premiere next month.

The show will deal with a particular aspect of the criminal justice system, double jeopardy, and the people who search for the truth shadowed by that rule. Junho’s character is that of a defense lawyer, who chose his occupation because of his desire to save his father on death row. Though I expect him and Yoo Jae-myung to eventually work together, they start off on the wrong foot. Yoo Jae-myung’s character, for his part, is a former detective who is chasing the truth behind a case that was wrongly decided, according to him, 5 years ago. The synopsis doesn’t elaborate whether that case involves Junho’s father, but since this is a drama, I’d say it were a safe bet to assume there’s some relationship.

Shin Hyun-bin (Mistresses) will play Junho’s best friend, a former journalist who is as passionate as she is unabashedly odd. Other supporting cast members include Nam Ki-ae (Boyfriend), Yoon Kyung-ho (The Crowned Clown), Lee Ki-hyuk (Greasy Melo), and Jung Hee-tae (Neighborhood Lawyer Jo Deul-ho 2). I’m also excited by who will be in the director’s chair: Kim Chul-gyu, who directed last year’s Mother, will be returning to tvN for the courtroom mystery, and I look forward to seeing what he brings in this newest drama.

Confession will premiere on March 23, and will take over tvN’s Saturday-Sunday slot.

I’m sorry did you say Yoo Jae-myung + Junho? Well well well. Don’t mind if I do.

Ugh, yes. I'm legitimately excited for this one. Although the script reading article hyped up the chemistry between Junho and YJM so much that I'm almost afraid I'll be let down lol.

Junho had great bromance with LSM in Memory, NGM in Chief Kim, and JH in Greasy Melo (still salty the writer didn't develop it much more). So I'm not afraid to be let down by the potential chemistry. But I hope the scriptwriter recognizes what the actors are able to bring to the screen and let it evolve with the direction of the story instead of forcing things.

I can't really shake off how much this premise reminds me of Remember - War of the Son with some tweaks in the details. In dramas like this, unless it's really well-written I end up rooting for the villain because the heroes are poorly characterized, always one step behind, frustrating, or plainly dumb. Therefore, the cast of the antagonists will be very interesting.

Tentative but really looking forward to this drama. I want to be able to add this drama to my rewatch list once LJH enlists.

Confident about the actors and director, now I hope the writing does them justice. Junho is so charismatic that I even watched greasy melo to just see his acting (Did you watch the scene when he confronted his ex?..shivers) and ff the rest.

Fun Fact: Junho, Nam Ki-Ae and Shin hyunBin acted in JBL but never shared a scene, with Hyunbin being a cameo

Count me in! I need to see this drama before two years of Junho celibate when he's enlisted....

New movie, music, drama - it’s a great time to be a Junho fan, ironically right before he enlists. This boy is the gift that keeps on giving. Check his IG for a photo of him in period costume, and with that I wish you all a Happy Lunar New Year!

You had me at YJM and JH... but the PD of Mother is directing this???
There's no way I can't tune in.

got to see Junho one more time before the army gets him for 2 years. i love his acting and i enjoyed greasy melo for who was in it. i can jump over plot holes just fine when i can just concentrate on the actors making it work in spite of all the wrong things a happening. i just love to watch them in action!