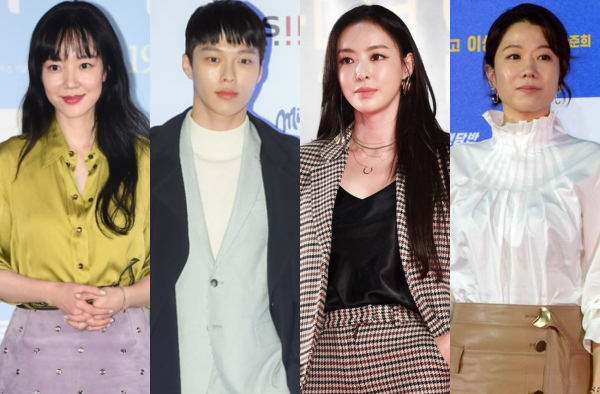 Well, someone’s star is rising rapidly, isn’t it? Jang Ki-yong’s (Come Here and Hug Me) next project, OCN’s Kill It, hasn’t even premiered yet, and the actor has already lined up his next gig in tvN’s Search Query: WWW. It’s a pretty awkward title, with the acronym ostensibly standing for the world-wide web, but it’s supposed to refer to the career women (and man) who operate online portals. These women are Im Soo-jung (Chicago Typewriter), Lee Da-hee (Beauty Inside), and Jeon Hye-jin (Misty).

Im Soo-jung will play the strategy manager of the industry’s top portal site, specializing in what’s termed as “unicorn service,” which refers to rapidly growing startups. Think venture capital, or an investment firm with a particularized interest in tech startups. Her character is highly competitive, which makes sense given her chosen career, and loves winning above all, even above romance. At least, until Jang Ki-yong enters her life. Jang Ki-yong will be playing the young CEO of a computer game music-producing company, as well as a genius composer. He attended high school in Australia, but has since returned to Korea, and has had his fair share of life’s ups and downs compared to the average guy in his twenties.

Lee Da-hee sounds like she’ll be a formidable rival to our main heroine, as the social media manager of a portal site that always trails in second place to Im Soo-jung’s. She was a judo athlete in a former life, and without an outlet, she has some anger management issues, which is expressed in bouts of physical strength that is surprising coming from someone her size. I hope she plays one of those likable frenemies to Im Soo-jung, though, because she’s just about the most endearingly unlucky woman alive when it comes to romance, with all her past boyfriends having cheated on her.

And last, but certainly not least, is Jeon Hye-jin, a board member of Im Soo-jung’s company. She must come from a privileged background, because she’s married to the son of a chaebol family, whose conglomerate is the parent company of the portal site she works at. The marriage was more of a strategic one than one borne out of love, and the couple treat each other as partners in a business arrangement, with an understanding that neither will interfere in each other’s lives.

Directing is PD Jung Ji-hyun, and writing is Kwon Do-eun, both of whom were involved in tvN’s Mr. Sunshine, as co-director and assistant writer, respectively. WWW is scheduled to air on tvN sometime in the first half of this year.

Interesting...I recently heard that start ups in Korea treat their employees in a more human way compared to traditional companies.
Jang Ki-yong is going to be everywhere...smart move since so many big names will soon be back from military service.

2 gadis is camping in the cells village (again)

With this kind of casts, I'm definitely in. The story and characters sound interesting too.

So happy that he's headlining two upcoming dramas, but I hope he's getting enough rest too. Don't overwork, my boy! 😘

Seems interesting!
Young CEO, australia returned, genius - is this the new definition of 'chaebol' of workplace in kdramas?!!

So when will we get Lee Da Hee as main lead...

So excited for the production tho! As expected from our hardworking Jang Ki Yong 💓

Is that the Lee Da-hee from Secret and Big Man? You'd never know it from that photo. What happened? Looks like she took to heart the complaints about her ultra-skinny appearance and did a makeover.

Yeah me too, this sound weird but I thought she's Lee Yeon Hee during Beauty Inside O,O

My thoughts exactly, I loved her in The Beauty Inside and if you get a chance you should try and watch the Laws in the Jungle episodes with her guest appearances. She's surprisingly quite the warrioress and juts a lovely, humble woman.

Thanks! Will check it out later <3

She is soo hilarious on Running man (esp the extended eps) with Lee Kwang soo.

Oh yeah I had watched that one! I'm sorry to say this but back then I don't really like her somehow lol idky

Reply to meatball (for some reason it didn't give me the option to reply on your last comment).
No need to apologize, it would be boring if we all agreed on everything!

my eyes rolled into the back of my head when i read the character description for the male lead. and geez i hope they change the title lol.

but everything else sounds great! love the cast! i’m glad to be seeing more of im soo-jung on the screen and i’m hoping lee da-hee’s character will be as fun as she sounds. i liked jang ki-yong in come and hug me (though i kept noticing how he never blinks????) so i’m glad that he seems to be keeping busy.

Most actors are trained not to blink during scenes; he’s probably better at it than most.

Are you kidding?? What are they supposed to achieve by not blinking?

It brings an intensity to your face, but also, blinking distracts the audience from what you’re saying and doing. But not always. You act with your eyes too, so sometimes a blink, wink, and batting your eyes, during a scene is intentionally done. Next time, watch an actor during a scene and count how many times they blink vs how many times you naturally blink.

I swear I've never noticed before but from now on I'm on the lookout for blinks. Thanks by the way.

Jang Ki Yong is certainly rising fast. I have yet to see him in a full role, but I’ve heard good things about him and I’m interested in his upcoming OCN thriller. This drama sounds pretty good as well. The cast is shaping up nicely.

I wish Lee Da Hee would get a good role as the lead soon though. I really liked her in The Beauty Inside. Hope she will still be likable here.

Not interested in a noona romance. I hope the characters will be close in age. I like everyone individually but not sure as leads together.

Same thoughts. Not ANOTHER noona romance. 🙄

I'm so excited I'm Sop Kyung's last project was Chicago Typewriter and that was amazing, so I have high expectations.

Great cast. Interesting premise, though it does seem like something that could easily spiral out of control. Will for sure check it out!

Also, Jang Ki-yong is getting quite the roles, and I'm totally okay with it!

i hate age gap romances so maybe they will be close in age..but i will probably skip it. they're all such beautiful women and even though i came to hate misty jeon hye-jin is gorgeoussssssssss to me omfg her and her husband. jang ki yong is incredibly attractive lmao. finding them all hot is basically the only thing that would tie me to this i s'pose

I just want Lee Da-hee to get a lead role. Someone give her a chance! :(

"Oh snap!" was the first thing that went through my mind upon reading the casting news 😍
Eh I was thinking that Jang Kiyong's character will be an employee of a position lesser than Lim Soojung's but oh well drama gods cannot easily let go of the habit of wrapping up male protagonists.
I like Lee Dahee's character description because we have second female leads who are utterly perfect but they feel threatened upon the appearance of snowflake heroines, so having a less competent second female lead is somewhat refreshing. And I look forward to see her turn from a cold woman with a deadpan voice to a former judo athlete with anger issues.

Super excited for this cast and story seems somewhat refreshing.

The only drama I watched from Jeon Hye-jin is I’m Sorry, I love you and it has been more than a decade. I know it’s kinda shallow but I wanna see how LSK’s wife is. #acuriousfangirl 🙊
In MiSa she was great and here she is with Im Soo Jung again👍🏻

Omg plenty of Jang Ki Yong on my screen this year 😍😍 His back to back casting news reminds me so much of Seo Kang Joon last year. Hopefully his dramas will be great, so I can watch him through the end. The picture stills of his other drama looks promising tho.

JKY makes such smart role choices. He's careful to go from light to dark, and jump from genre to genre, to not get pigeon-holed. He can play the lovable beau, the melo puppy, the psycho villain, the badass cop and all between! It sounds like this character could go quirky (aren't composers all supposed to be a little mad?) so I would love to see that from him.