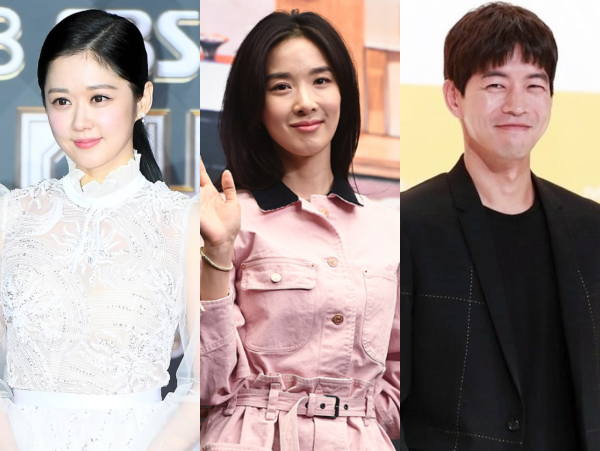 Jang Nara’s only just finished wrapping up on makjang extraordinaire An Empress’s Dignity, but there’s a chance she might be returning very, very soon to SBS for its latest drama, titled VIP. In addition, Lee Chung-ah (Because This Life is Our First) is considering joining Jang Nara and Lee Sang-yoon (About Time), who was offered a lead role in this drama last month.

The show is still in its early planning stages, so there’s not much plot info, though its particular mix of genre mish-mash has me intrigued. VIP will follow the success story of working women, who strive to stay on their career path despite all the obstacles they face. It sounds like any other office drama with a focus on career women, but the show defines itself as an “office mystery melo.” The mystery element comes in as the audience slowly discovers the secrets of three women at the center of the show, one of whom (we’re not meant to know which one) is cheating on her husband.

I’m assuming that Jang Nara and Lee Chung-ah are two of the aforementioned adulteress candidates. Lee Sang-yoon will be playing the team leader of a department store’s VIP section, who is something of a golden boy, with the academic specs and ambition to go far in life and career. No wonder he’s sought after by most of the company’s female employees, though he’ll only have eyes for one woman (naturally).

Directing is PD Lee Jung-rim, and writer Shin Hye-won will pen the script. VIP is slated to air on SBS in July of this year.

Okay, I'm just going to say it - I don't like Lee Sang-yoon. I'm not sure whether it's the characters he's played, or just the actor. Safe to say I'd rather see these actresses with someone else... But then again, he fits the bill perfectly for this role. Anyone else torn? 🤔

This may help -thinking less about time, recalling more 20 again.

Yeah I also really liked him in Liar Game and Twenty Again but not so much in anything else I've seen him in and yes, About Time was a huge turn off. I can't even exactly explain it but he just gave off a really skeezy vibe and I stopped watching that show.

In the second half of About Time any residual skeezy vibe you saw was replaced by boredom and general air of "why am I in this horrible drama?" There was a reason he didn't jump out of the path of @sincerelytod

Settle down, Boys and Girls, for @egads is about to spin us a tale...

My favourite part of that drama was watching the actors' progressive desperation for the whole thing to be over.

@leetennant The progressive desperation is perhaps a factor in my continuing to watch. Honestly, I would not have been surprised if one or more of the actors had flashed a sign signaling for help.

I kept watching @egads because I was promised a two-for-one ToD. I didn't know it wouldn't happen till the final episode.

If only the ToD in Devilish Joy didn't happen so early, I may have made it through that offensive piece of fustercluck too.

To this day....I still do not get About Time.

@larelle79
About Time and Devilish Joy are what happens when writers pump out content for the sake of content. They think they can swap good writing for trope soup and people will still eat it.

the poor, poor actor. I've developed a sort of pity for him ever since that show. He's also adorable in Master of the House.

Devilish Joy was such a wreck that in the final scene everybody started dancing. Literally they had everyone kooky-dance down the aisle and then thanked the viewers. You could just tell the entire cast was going to (or had already started to) get drunk.

I went "nope" as soon as I saw his name. He's just one of those actors I dislike no matter the role.

Opposite reaction. Lee Sang-yoon's one of the few in his age group that I do like. He's a relief from the pretty boys. There's a maturity about him. I

I loved him in On the Way to the Airport

Me too! He was sooo good!

He really was! Such a good show

I agree with you. Lee Sang Yoon is a truly gifted actor. I dont know why people say negative reviews on AT, but at least his a risk taker,,,, he is an actor that deserves respect, he work his best....

I saw him in Twenty Again and About Time and had the appropriate reactions to both. But I love him in Master of the House, he’s such a sweetie.

I'm actually interested in watching Master in the House! I mean, it's Yook Sung-jae and Lee Seung-gi in one place! What's not to love?

Isn't he the bees knees on Master. That is where I fell in love with him.

I think I liked him in Life Is Beautiful, but that was 8 or 9 years ago so I can’t really recall if I did or not... I know for sure I haven’t really liked him in anything since. There’s so many better actors that would I would prefer.

Hmm I’m quite neutral to him so open to him, but never super excited for his casting (instead a little disappointed one of my favs isnt cast instead) but don’t actively dislike him... though never really wowed by him yet. I think the thing is... I’ve never really seen passionate or overly emotive acting from him. But also haven’t seen that many of his works either... so yeah definitely neutral zone haha.

Weirdly reminds me of Mistress.

Mistress was awesome - if this is anything like Mistress, I'll cry for joy!

I had the same thought. Would be interesting who the last lady is - are they going to go with the whole innocent looking actresses so it’s harder to guess who is cheating?

I like this possible casting of experienced actors. Please lure me back to Kdrama by good writing, direction & ensemble acting.

I'd love to see Lee Sang-yoon in a good drama! Hope this won't be (another) disater! * finger crossed*

Listen, I'm gonna root for Lee Chung Ah. I love her and rarely see her in Dramaland, it's a shame. I'm still waiting for that High School King of Savvy spin-off where her and Lee Soo Hyuk's character run off into the sunset together after she shakes up his too-put-together life. Waiting!

It's just a shame this is a melo and she won't get a chance to show off her amazing sneaker collection.

What ever happened to the drama where Jang Nara was set to play a blind musician? I was equal parts excited and terrified (of how they would treat her condition) to see Jang Nara play a blind character, but it seems to have fallen into the pre-production abyss. I wonder if it will ever re-emerge.

Also, her character had a guide dog and the male lead was going to be a veterinarian and I just really wanted to see that, okay?!

Wasn't that Dog or Witch or something??? I've had that on my "coming soon" list for yonks and I have no idea where it went either!!!

They’re trying to coordinate her and LMK’s schedules?

Kang Haneul had been offered the part of the vet in DOG WITCH AND ME in April, 2017, but enlisted in September. Methinks there wasn't enough time to film it.
http://www.dramabeans.com/2017/04/kang-haneul-offered-lead-in-pinocchio-pds-new-rom-com/

Lee Sang-yoon was charming as all get out in LIFE IS BEAUTIFUL. He held his own in a cast full of charming dudes (except for straying grandpa and cranky Little Uncle). I liked him in PINOCCHIO as well. ABOUT TIME reunited him with Kim Hae-sook, his mom in LIFE IS BEAUTIFUL -- but that's about the best thing I can say about it. Oh, and the musical-within-the-drama was good.

I have faith in SangYun’s acting & I will watch it for LeeSangYun and JangNara. Watched LSY’s drama Twenty Again and Liar Game