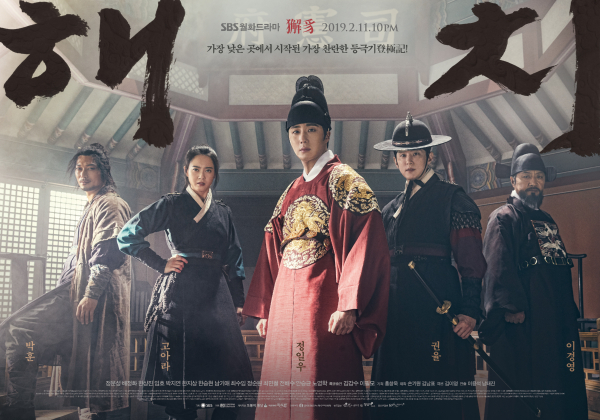 Only a couple days away from the long-awaited dramaland return of Jung Il-woo (High-End Crush)! And in a sageuk, no less, from Kim Yi-young, the writer behind Yi San, Dong Yi, and the Horse Healer, which are some impressive credits. His co-stars aren’t too shabby either, with Go Ara (Ms. Hammurabi), Kwon Yul (Voice 2), Park Hoon (Memories of the Alhambra), and Lee Kyung-young (Room No. 9) rounding out the main cast.

Reports describe Haechi as the 2019 version of the traditional sageuk, which likely means no supernatural elements despite the drama’s title, but I find myself looking forward to watching a sageuk that’s a little more straitlaced than the latest trends. And Kim Yi-young, who has a flair for the underdog success stories, will definitely lend a steady hand to Haechi, which will chronicle the rise to power of the future King Yeongjo.

King Yeongjo himself was definitely the underdog before he became the king, as the son of a water-maid-turned-concubine (coincidentally the subject of this writer’s hit drama Dong Yi), and thus considered a prince of lowly origins. As many sageuks before this have illustrated, his mother’s status haunted and informed some of his most infamous actions as king, but I’m excited to see a version where he defies all expectations that were put on him as the son of a former servant. And knowing Jung Il-woo, he’ll definitely have us all rooting for him the entire way.

Haechi will premiere this coming Monday, February 11, and will air on SBS’s Monday-Tuesday slot. 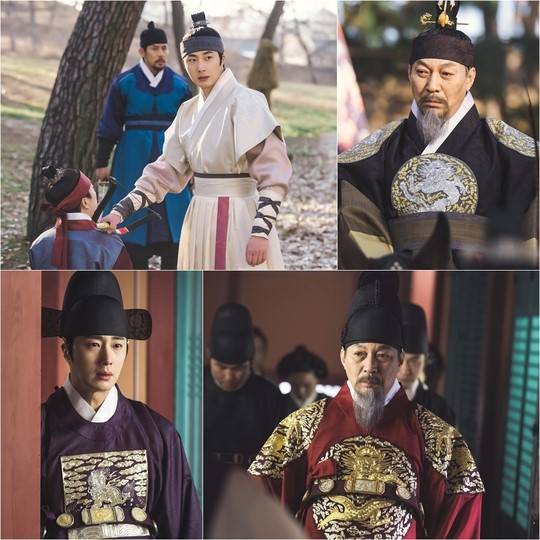 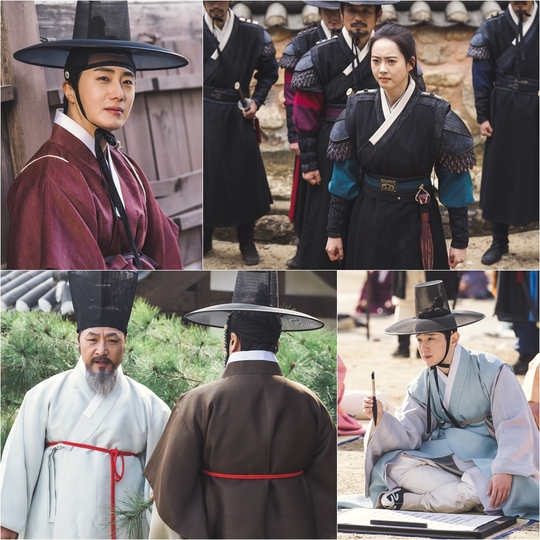 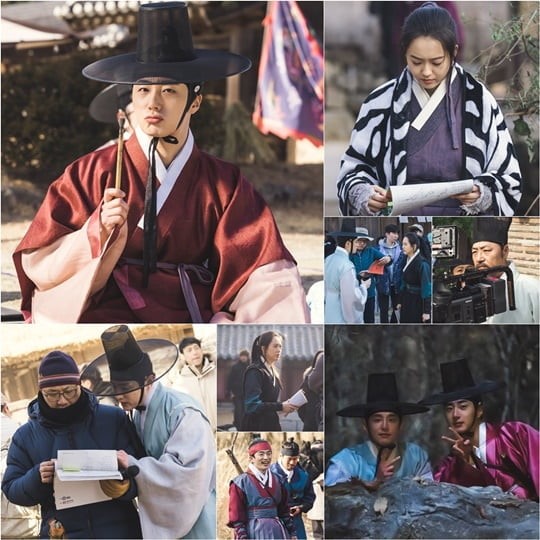 Kim Kap-soo as King Sukjong (yay) and Lee Gyeung-young as Minister Min (yay).
Seeing Han Sang-jin in the cast makes me miss YI SAN.
I'm counting on the veterans to keep me interested and I hope we won't get another boring HWAJUNG or HORSE DOCTOR.

*sigh* I couldn’t finish Horse Doctor even though the cast included some of my favourite actors. Maybe someday.
Monday-Tuesday will have the battle of the sageuks now. Yay!

I was excited to see Jo Seung-woo in his first drama ever but was so disappointed with writing etc. I stayed for Kim So-eun
Jo Seung-woo won a daesang for his role in HD and he reluctantly accepted it but he didn't think he should have won.

Mon/Tues is my fave days of the week :).
CROWNED CLOWN starts 30 mins early so the ratings will be interesting.

I'd LOVE to hear your veteran thoughts about Yi San and Horse Doc, Ms.kiara.
It's been a long time so I don't remember exact details, but I remember fairly living HD and disliking YS. I immensely enjoyed Lee Seojin and Grandpa Lee, also Queen Hyoui, but other than that.....I thought the mainly political plot was "dry". Probably that impression got into my head by the very 1st episode, where Joseon was suffering from a drought with mirages everywhere..oh well.🤣😅
Many medical stuff in HD were silly, but Jo Seung woo, Gramps Lee(again), Princess Sukwhi(what a pretty name) and the cocubine-less king and Lee Sang woo were hoot to watch. Plus it has my ALL time favourite Sageuk opening-credits music.
I'm intrigued by seeing that you think differently. I've seen people disliking HD and I can see why, but this is the 1st time seeing a BIG praise for Yi San.

In short YI SAN was a history treat with grandpa Lee humanizing King Yeongjo and how he sacrificed his son to save his grandson etc. (Two heirs, one throne).
Forgive me but HORSE DOCTOR imo was well, kind of a dumb down male version of Dae Jang Geum. It was boring for me and PD Lee who also directed YI SAN probably let his newbie assistant PD Choi did most of the work.

I think with every drama it comes down to taste and what works for each of us individually. We won't always agree and it makes the discussion more interesting.

@kiara
Oh I see. Hehe, why would you be sorry? I too, in fact felt that HD was a dumber version of DJG. And Prince and Gramps relationship was more great than the Doc and Teach. I'll have to see Yi San once more to refresh my memory about the coolness of the political stuff😄😅.

Seriously, I'm like, please just be better than hwajung, LOL. I seriously didn't want to get my hopes up, but the teasers have all looked so good. Gah!
Yi San...I dare not expect that level again but I may be hoping deep down...

I cannot wait to see Jung Il Woo return. Why I am so fond of this actor, I do not know. But really, oppa, welcome back. *cringes at self*

*sits down next to a cringing GF*
Don’t think, feel? Welcome Oppa!
*rolls out a welcome banner*

for me i think it is because of Return of Illjimae. and my love grew from there~

Haha same actually. I loved him in that show, and it just started from there

I think it's the smile, @greenfields, that smile is just so endearing.

And he's so witty and funny in variety? 😄 Definitely the smile. It's super endearing.

"If you're handsome, you're my oppa" 😄 it counts hads.

A sageuk I will give a chance.

I’m thinking maybe I should re-watch The Return of Iljimae first.

Thanks for the update on HAECHI, @tipsymocha. Looking forward to Jun Il-woo's comeback.

its clear to me now why we had endure last years drought of good dramas! THIS YEAR! its starting off with a bang (for me) and i am so happy to welcome jung il woo back to drama land among others who will come too! let the marathon watching begin! (as in 10+ episodes per week) so who cares if nothin else gets done? a happy beanie is a good thing

What an embarrassment of riches 2019 will be for sageuk fans.
KINGDOM I is completed. We are entering the second half of THE CROWNED CLOWN.
Next up is HAECHI. (I am unclear on HAECHI's episode count because its Wiki page lists 32 episodes and its AsianWiki page lists 48. This being a SBS production and based on recent experience who know what the final episode count will be.)
Then supposedly in the first half of 2019 we have ASDAL CHRONICLES and MUNG BEAN FLOWER followed in the second half of 2019 with MY COUNTRY. This may not be a complete list.
I am looking forward to continuing my study of Korean history with HAECHI.
I am definitely the "newbie" here in sageuk world.
It is so nice to see my Sageuk Sunbaenim here. Please continue to share the wealth of your sageuk knowledge.

An embarrassment of sageuk riches indeed. ;-)

Speaking of KINGDOM, Ju Ji-hoon's next drama, ITEM, premieres along with HAECHI today, Feb. 11. His playing a prosecutor involved with a gizmo having supernatural powers ought to cause a bit of whiplash even as Joseon zombies continue to run riot in the back of my mind. ;-)

I was thrilled out of my shoes to read that MUNG BEAN FLOWER is hosting a SIX FLYING DRAGONS reunion of Park Hyuk-kwon (demon swordsman Gil Tae-mi and his brother) and Min Sung-wook (Jo Young-gyoo). They portrayed two of my favorite characters in 6FD. (Sorry, I don't recall Gil Tae-mi's brother, aside from his eulogy for his twin.) This is old casting news from mid-January, but I only stumbled across it this weekend. As if Yoon Si-yoon and Jo Jung-suk starring in the same sageuk weren't enough cause for rejoicing.
https://www.hancinema.net/orion-s-daily-ramblings-park-hyuk-kwon-and-min-sung-wook-join-mung-bean-flower-125804.html

I'm beginning to think that Junho has some kind of time dilation gizmo at his disposal. He started filming sageuk movie GIBANG BACHELOR in December, for release later this year. His next drama, modern legal whodunnit CONFESSION, premieres on March 23 on tvN.

Hi @pakalanapikake. Junho turned 29 on Jan. 25, 2019. At some point this year he will begin his military service. (2019 is the of mandatory enlistment year for the 1990ers.)
I have CONFESSION on to watch my list.
My sabbatical is officially over.
I am live watching THE CROWNED CLOWN, COFFEE FRIENDS (my very first but delightful reality show), TRAP (episode one was OCN excellent!) and will begin HAECHI and ITEM. Also on catchup are the recently started GO BACK COUPLE (through ep. 3 and quite enjoyable) and JEONG DO JEON (finished 32 of 50 episodes-I am slacking a bit there.)

I'm aware that Junho will be enlisting soon, hence his making hay while the sun shines. Fingers crossed that CONFESSION knocks it out of the ballpark as a fitting sendoff from Kdramaland. WOK OF LOVE is not the show I want to remember him by while he's serving his country, although it had its moments. Gluttonous Psychopath Seo Yool from CHIEF KIM, and Lee Gang-doo from JUST BETWEEN LOVERS, however, are the bee's knees.

The last of my six holdovers from 2018, CLEAN WITH PASSION FOR NOW, has finished at last after being preempted mercilessly. Yoon Kyun-sang acquitted himself well, as I expected, but the show went south in the later innings, which was a pity.

I'm still live-watching CROWNED CLOWN, and enjoyed KINGDOM, but for some reason find it difficult to organize my thoughts on them, so haven't been commenting much.

Thanks for the reminder about TRAP. I vaguely recall seeing casting news on it, but it slipped past me. I'll give it a gander. The fact that it's only 7 episodes is very appealing. After his performances in LIVE and MS. HAMMURABI last year, I became a bona fide Sung Dong-il fangirl, and look forward to seeing him in a thriller. I think the first show I saw him in was LEGEND OF THE BLUE SEA, in which he played a baddie in both time lines. He portrayed quite the creepy serial killer in the modern one, so I really appreciate his honorable characters in the later dramas.

GO BACK COUPLE was a good show. I recall I enjoyed its warmth when it aired, although in the beginning I may have torn my hair out over male lead Son Ho-jun as much as his wife Jang Na-ra did. Kim Mi-kyung was top notch. Jang Ki-yong caught my eye enough to make me watch all of COME HERE AND HUG ME.

How are you liking JEONG DO JEON?

Thanks for the reminder on upcoming saeguks! I don't know if I'll be able to manage that many, but now I'll have the embarrassment of choice.

Oh wow I just looked at his wiki and he is a fascinating figure. His life is definitely drama-worthy! I'm curious to see how they'll portray his relationship with his son Crown Prince Sado that he so famously executed. I also want to see his relationship with his grandson King Jeongjo if it even gets so far in the timeline. He had a problem with his son, but not his grandson and they must have had a difficult relationship especially since King Jeongjo was filial to his father so he must have seen something that his grandfather didn't in his own son. A lot of interesting characters they can explore.

I absolutely loved, loved, loved (and still love during every re-watch) "Dong Yi"--seriously, I love it even more than "Jewel In the Palace" a.k.a. "Dae Jang Geum"-- but I can't decide if it's because of the writing, the acting, or both hahhaha

I am always surprised how fast an actor starts working after the is released from the military...

Already exicted about having a new sageuk and there's Kim Gab-soo in it? Excitement level just reached a new high!