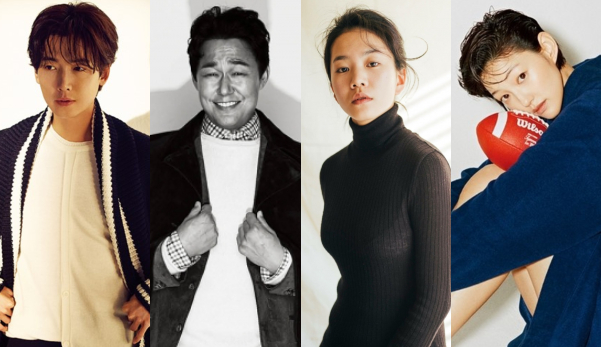 Well, if this isn’t a cast to die for. Months after we first heard Jung Kyung-ho (Life on Mars) had been cast in tvN’s upcoming fantasy drama When the Devil Calls Your Name, the rest of the main cast has been announced, and these names have definitely put this drama on my must-watch list. Park Sung-woong (Hundred Million Stars From the Sky) will be reuniting with his Life on Mars co-star, joining Lee Seol (Bad Detective) and Lee El (Matrimonial Chaos).

The upcoming fantasy mystery thriller not only has a stellar cast, but its premise is intriguing, not least for its connection to a well-known classic. Inspired by Goethe’s tragedy Faust, the show will follow the story of Jung Kyung-ho’s star composer with numerous hits to his name. His fame and talent, however, is a product of a contract he made with the titular devil, selling his soul in exchange for success. Park Sung-woong will be playing the devil, or more specifically, a top actor who’s been possessed by the devil.

Aw, I was hoping for some more of the epic bromance we saw with these two actors in Life on Mars, but I can’t imagine them being super chummy given we first meet them as their contract is coming to an end, and the devil is eager to collect on his deal. I’m sure Jung Kyung-ho isn’t going to go quietly though, as the composer is described as initiating a deadly game with his life on the line.

Lee Seol plays an unsuccessful singer-songwriter who is so unlucky that she would “break her nose if she fell backwards.” Her luck (or lack thereof) is because her talent and life was stolen away from her and given to Jung Kyung-ho when he made his contract with the devil. Once the composer discovers his own success came at the expense of hers, they join forces to recover both of their lives, though they don’t know whether that will lead to heaven or hell.

Lee El, on the other hand, sounds like she’ll play the one main character who isn’t directly involved in this devil’s contract. She’ll play the stylish and trendy CEO of Jung Kyung-ho’s management agency, who is his most trusted peer. She’s a bit of a workaholic as well, and her frankness makes her invaluable to the bedeviled composer when he needs honest advice. I have absolutely no trouble imagining Lee El play the strong, blunt careerwoman with a kickass wardrobe, and I’m already developing a girl crush on her character.

On top of a buzzworthy cast and promising synopsis, When the Devil Calls Your Name will be helmed by director Min Jin-ki, who directed one of my sci-fi favorites, Circle: Two Connected Worlds. He’ll be joined by writer Noh Hye-young, whose drama credits include Come Back Ajusshi and who also penned films Singles and 200 Pound Beauty.

When the Devil Calls Your Name will air on tvN sometime in the first half of this year.

What a cast!!! I hope writers do them justice.

Jung Kyung-ho is coming back and being reunited with his Life on Mars buddy! The drama premise is really novel and has the potential to explore deeper aspects of humanity than dramas normally can. Excited, excited!

Now I'm doubly excited for this! 😭😭😭
You had me at literally everything, but Circle PD is in on this?!

I will probably be viewing the ladies through Bad Detective & Hwayugi - colored lenses. But that's not a negative.

I'm not particularly interesting with the premise, but Park Sung-woong picked exceptional dramas last year, not to mention his cameo in another hit, Waikiki. So, I trust his choices.

Well this sounds interesting and I'm loving the cast!

This cast, this PD, this writer ♥

Park Sung-woong will be playing the devil

And he looks so deliciously devilish in that photo!

Totally agree. I'm super excited to see JKH and PSW reunited. PSW playing the devil is the cherry on the cake.

I'm so excited for this!! Brilliant cast!! JKH and PSW have been starring in my favorite dramas lately, so big hopes for this one too! 🤞🤞

The cast sounds amazing! When I first heard of Park Sung-woong's role, it made me scratch my head, but reading the rest of the plot has got me nodding along. Excited for this one!

As for the writer, while I love her brand of humor (watched all her previous credited works and there's only one I didn't enjoy), I'm not a huge fan of her take on social commentary. Hopefully she plays to her strengths... or maybe she'll surprise me in a good way with her second drama.

Yassssss!!!! PSW has finally confirmed! Maybe i should not expect any bromance this time around. I will tune in. I like them together as much as i like each of them individually. They are both great actors. I hope this drama hits daebak! And there is Lee El. She's awesome too! Excited for this!

The plot looks interesting! i can't wait till it starts airing!

I'll still be holding on for bromance, you know, keeping enemies closer and such...
The premise reminds me of Lovely Horribly with all the stolen luck, would be really happy to have a coherent story and ending because the previous one sure didn't.

Man... if this is bad you're all gonna be so mad lol. *evil giggle*
I don't know if I'll watch it. I'll see when it comes round. But @obsessedmuch will because she watches everything with Jung Kyung Ho in it :P :P :P

Shhhh don't out me like this!
Not everyone knows that I am that crazy about Jung Kyung Ho!
Though yes! I will watch it for sure! Even if I am in a drama slump at that time!

Just know that if the show is bad, I'm gonna come back to this thread and blame you for jinxing it. :P

*evil giggle* fine by me hahahaa

I love this casting! JKH and PSW were great in Life on Mars. PSW playing the Devil, I guess we won't have a new fighting scene in a hospital room.

I love Lee El, she's so charismatic and can be very funny. In Hwayugi, she was very funny, ready to kill everybody for Ma Wang.

For Lee Seol, she didn't impress in Bad Villain, but I dropped it so maybe I missed her good scenes.

A supernatural drama and Lee El is playing a normal business woman?

Calling it now, she's probably playing God or an angel.

I have been waiting for news on Jung Kyung-ho next drama WHEN THE DEVIL CALLS YOUR NAME. I am really excited that Park Sung-woong will be back with JKH so soon. From his recent performance in THE SMILE HAS LEFT YOUR EYES we know PSW can go to the dark side.
I was hoping that the drama gods would somehow reunite JKH and Yoon Hyun-min. Because MAMA FAIRY was pre-produced I
thought maybe YHM might be available for JKH's new drama but it is
not to be.
So YHM fans this is what I just came up with.
YHM and Go Sung-hee are slated to lead in Netflix's ME ALONE AND YOU. It looks interesting. Here is the report from Soompi:
https://www.soompi.com/article/1303651wpp/yoon-hyun-min-and-go-sung-hee-to-star-in-upcoming-ai-drama-on-netflix
I have to share the AsianWiki plot synopsis for this drama but they have it under the title I HOLO YOU:

A woman (Ko Sung-Hee) is lonely. She happens to meet hologram AI Holo (Yoon Hyun-Min) which is completely on her side.

Here is the AsianWiki link:
http://asianwiki.com/I_Holo_You
I don't know but that plot description just made my day.
I guess when your lonely there could be worse ones than YHM to meet up with.

This is some Winchester BrothersXCrossroad Demon kinda situation! I love it! Can we get some Hellhounds too writer-nim?? 😁

Wohooo!! I am dead! I am IN, just wake me up when it starts airing!

I’m so excited I want to cry and I’m not even exaggerating.