A lawyer with a tragic background becomes a star in his field thanks to his sharp intellect and drive to succeed. He will do anything to win a case and make money, and has ties to a corrupt corporation. However, once he sees behind the curtain, things start to change.

A lawyer with a tragic background becomes a star in his field thanks to his sharp intellect and drive to succeed. He will do anything to win a case and make money, and has ties to a corrupt corporation. However, once he sees behind the curtain, things start to change. 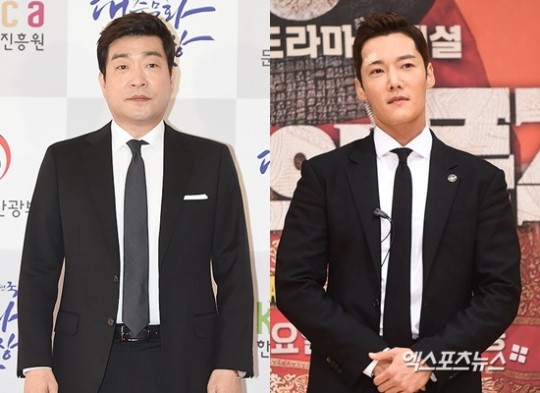 The drama will be an adaptation of a web novel, also titled Justice, which was first published in 2017 and written by writer Jang Ho. A lawyer becomes set on revenge after losing his family from wrongful dealings of wealth and power. However, his greed for vengeance leads him to shake hands with a man like the devil, which sets the course for the story.

If he accepts, Sohn Hyun-joo will be playing Song Woo-yong, president of a construction company. From the outside, he appears to be just one of many who run a small business and nothing sets him apart from the crowd. In reality, his life is shrouded in darkness. He’s a master manipulator and adept at control people by using money and people’s ambitions to his advantage.

Choi Jin-hyuk is being considered for the role of the lawyer, Lee Tae-kyung. He has the pride of having the highest case success rate in his field and is always entrusted with the firm’s most important cases. He’s astute, logical, great with words and public speaking, and good looking to boot.

Directing will be done by PD Jo Woong who directed KBS Drama Special, A Midsummer Night’s Dream back in 2016. And writing is credited to Jung Chan-mi who previously wrote on the writer’s team for Sassy, Go Go.

It would be great to see Sohn Hyun-joo back in dramaland as it’s been a couple years since Criminal Minds. I think I’ve seen him play every kind of character, from evil chaebol to friendly next door neighbor, and he’s fantastic at everything. I don’t watch a lot of revenge stories, but I may check this one out for him.

KBS’ upcoming drama Justice is currently being planned to air later this year in July.

Looking forward to seeing Choi Jin-hyuk all the way to the end of a good drama.

Every Law kdrama has almost similar story and characters. Korean scriptrriters really love to do plastic surgery of stories. It seems like all stories come from one clinic.

I know what you mean...I'm totally surprised with Radiant/Dazzling aka The Light in Your Eyes. So far it's managed to be different from any other kdrama I've seen and I wasn't expecting that since stories about turning back time are so common.

Oh I thought it was being called Inner Circle? Or was it an alternate name?

I hope this drama does well and CJH stays till the end! What happened with TLE? Was it because the Royal Highness took all the limelight?

Various rumors have circulated...seems he had a prior engagement for a fan meeting in Taiwan. I refuse to watch the last episodes of LE but I've heard she didn't even mourn his death. The whole thing went south and I partially blame fans who wanted the Emperor to have a redemption arc.

ugh. how disappointing. i only have a few episodes left, but i am rapidly losing interest in finishing this show.

Soompi just did an article with goodbyes from the cast members - but Choi Jin hyuk wasn't included. How weird.

That *is* weird. Maybe he was in Taiwan when they did it?

I read that! The same thing happened after Time. 😔

CJH's agency just released that he filmed a program recently. From the article release it does seem to overlap with the filming of TLE. So i believe it when they said he has prior agreements and can't extend beyond ep 48.

TLE was postponed more than once resulting in a later end date than originally planned. Top that with an extension, the end date just got further away. Huhuhu

But it was just not right the way they dealt with his character the last two episodes. An honorary tribute to what he did should have been included in the end, but they just ignored his existence and his contributions to the downfall of the empire and focussed solely on Hyuk. I have seen this before, in Mirae's Fate and Cheese, and it made me so angry then, because I was supporting the actors that were supposedly the leads, and whom I was rooting for. This time, I rooted for Hyuk, and I was ecstatic over his hogging the last remaining episodes, but if I were a Choi Jin hyuk fan, I would have been so mad. I loled at your username, and am still sad over the ending.

And I am a loyal Choi Jin hyuk fan...

I feel like I dodged a bullet for not starting TLE despite the good reviews from beanies. I really can't stand vague ending, either for the story or characters.

I couldn't finish it either.... I enjoyed the ride up to episode 24, but it started so weird with a sudden change of the story. I only finished it by reading live recap on Dramamilk... The writer has been circling around with her story, I almost forgot that they needed to find out who actually killed Grandma. I also couldn't understand when the writer added several new characters in the last minutes... :(

I don't mind if he dies as long as it's a logical conclusion and not some kind of thing that doesn't make sense (like another drama I'm thinking of).

Sohn Hyun-joo in a darker role. Bring it!!!
Hope this will be better than Criminal Minds. Such a waste of talented actors.

Joking aside, completely agree with you. Can't wait to see Sohn in a dark role again!

And got needlessly excited! Haha

Please Choi, take this project so I can wash off the dirty aftertaste that is The Last Empress.

Can we have a royal hotness cameo? *looks around* *oh it's just me... slides away quietly*

Did someone mention a RH cameo? Yes please!

I got all excited thinking about it. SSH needs to do a new drama, and fast...I can't live without him.

I think he needs a bit of a break, he was looking a bit tired at the end, and remember we will see him in Vagabond soon.

I can't believe I'm actually looking forward to watch Vagabond. All thanks to SSR. And since its on SBS too, can I expect it to be craytastic like TLE? Does it work like that?
Hahaha

Yes please! RH and rocky needs to reunite and rekindle their brotherhood!

I hope Choi Jin Hyuk is doing well and whatever project he will take please don't deceive him again. I feel so sorry for him in The Last Empress and his character, Na Wang Sik. He took good decision for not extending that drama since his scenes even less compare to side characters. I understand his feelings.

I hope Choi Jin-hyuk has better luck with dramas this time.

It'll be Choi Jin-hyuk in a revenge situation again, but that's ok. Looking forward to watching him go head-to-head with Sohn Hyun-joo.

I am sure about trusting Choi Jin Hyuk with this role. If there is n't any makjangish***** mess up he will do just fine.

Can't wait to have you back in drama land. Your last two works are pretty much non-existent for me.