Supporting cast lined up for Korean remake of Designated Survivor 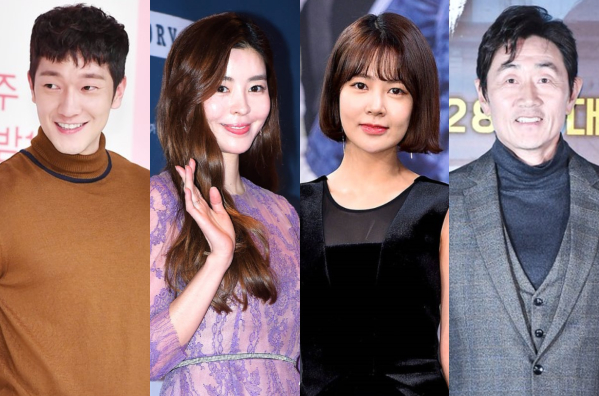 I’m quite iffy on remakes generally, but this is one that sounds like it could make for an interesting transition from the States to South Korea. Designated Survivor, the Netflix (formerly ABC) show, is getting the remake treatment from tvN, with Ji Jin-hee (Misty) confirmed as the lead character last month. In the past week, a whole slew of casting reports have also been announced, filling in important roles in this political thriller.

I haven’t watched the original show, so I can’t say anything to the quality of the American version, but the plot is quite interesting: The US show begins with the Secretary of Housing and Urban Development being sworn in as the unlikely President of the United States, following the bombing of the U.S. capital during the president’s annual State of the Union address, wiping out everyone in the near line of succession. The show then follows the newly minted president as he deals with the aftermath.

The Korean show has some minor changes, but sounds like it will remain faithful to the original in broad strokes: Ji Jin-hee will play the Minister of the Environment, who finds himself in the Blue House after the president and most of the high-ranking Cabinet are killed in a terrorist attack. A former chemistry professor from KAIST, Ji Jin-hee’s character will find himself unwillingly thrust into the seat of power, and dealing with a country in chaos following the events leading to his ascendency. He’ll be joined by Kim Gyu-ri (About Time), who will play his wife and First Lady of Korea.

And of course, we have various political players surrounding the new president: Sohn Seok-gu (Matrimonial Chaos) will play the Presidential Secretary for Administration. He’s considered the power behind the president, who is courteous and highly intelligent, but has an unapproachable aura. Veteran actor Heo Jun-ho (Kingdom), joins Designated Survivor as a former lower-level aide, turned Presidential Secretary for Political Affairs. And Choi Yoon-young (Enemies From the Past), who is more familiar to weekender watchers, will play the Presidential Secretary for Policy. I’m not familiar with the actress, but goodness knows I’m just really happy one of these key political roles is occupied by a woman.

And just as an aside, while the U.S. has a single chief of staff who assists the president in all areas, South Korea has various presidential secretaries for different issues (i.e. Foreign Affairs, Economy, Agriculture, etc.). These are separate positions from Ministers, who are the equivalent of American Cabinet Secretaries. I must admit that I’m not at all familiar with the hierarchy and structure of South Korea’s executive branch, but I’ll be interested to learn more and compare/contrast the dynamic with our own West Wing.

Designated Survivor is slated to air in the first half of this year on tvN.

since its still a long time to wait, might as well check out the original source material, it sounds exciting😅

How exciting, I like the American version, so seeing Korean government should be a fun learning experience.

So happy to see his career taking off!

I loved Designated Survivor and one of the reasons was the show was very earnest in Tom and what he vision was. The 1st season really was about working together and the conspiracy as to what happened at the capital. The 'backstabbing' as they say really was minimal and not put in for the sake of drama. The show was/is about career politicians and what they have to do to stay that way going up again a POTUS who is not only smart but not to the point of being a psychopath.

The 2nd season did pick up steam and gave Tom a little piss and vinegar but the overall theme stayed the same.

If they keep that vibe going with this remake, it might be okay.

I'm a big fan of Ji Jin Hee (have been since Dae Jang Geum) ! So this one will be on my radar! seems like an interesting look into the Korean political hierarchy.

*fans self and marks calendar for show premiere*

These remake shows tended to not be licensed by the major services but since Netflix has the original now ... and they've even been showing other remakes, maybe they'll pick it up?

Korean TV does 'government intrigue' so much better than American TV. I dropped the American series pretty quickly. I expect the Korean series to trim the story down to a streamlined 16 episode story arc. Lets hope the producers are fans of 'Forest of Secrets'.

Oooh sounds interesting. Double so because Ji Jin Hee will be playing the lead. From what I've seen him in he has a way of showcasing the vulnerability and empathy of his characters with very little dialogue.

I'm not familiar with the US version but I am a sucker for a well done political drama.

I watched about half of the first season of Designated Survivor. It was decent, not sure specifically why I dropped it. I would be interested in seeing this remake, but wonder how much knowledge I would need of their political structure to really understand the dynamics and what was going on.