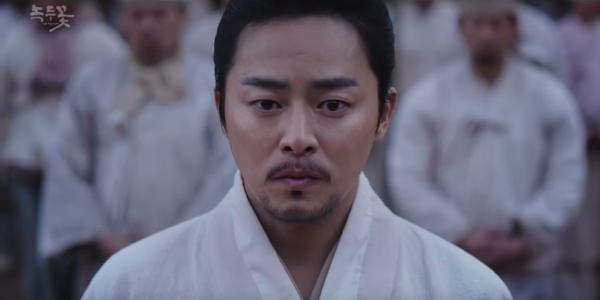 It’s a little hard to believe that this is Jo Jung-seok’s (Two Cops) first sageuk drama ever, but I’m here for it. SBS’s upcoming Mung Bean Flower has just released their first teaser, which centers on Jo Jung-seok and his involvement in the 19th century peasant rebellion that is at the heart of the show. I’m a little disappointed that we don’t see the other players in the main cast, especially since it includes the likes of Yoon Shi-yoon (Your Honor), Han Ye-ri (Switch), and Choi Moo-sung (Mr. Sunshine), but I guess we’ll just have to tide ourselves over until the show releases more teasers.

The clip itself is very short and starts right in the middle of the action: A man proclaims that “The world shall be saved, and the people shall be put at ease!” as we see torches reflected in Jo Jung-seok’s eyes, and a mass of peasants marching their way through a village. The captions read, “The torches all gather and become a sea, and the bamboo spears all gather and create a mountain.” A large number of peasants carrying banners and wielding bamboo spears gather in the middle of a field while a man offscreen marvels at the coming of a “new world.”

Though the plot description places Jo Jung-seok as a key figure of the Donghak Rebellion, despite his half-aristocratic origins, the clip shows that his character doesn’t start out on the side of the peasants. He’s shown being beaten to a pulp and strung up by his neck, surrounded by some angry looking villagers. Before the teaser ends, the captions read, “This crazy world will meet its end,” with a final shot of a grave Jo Jung-seok standing side-by-side the same peasants that attacked him. 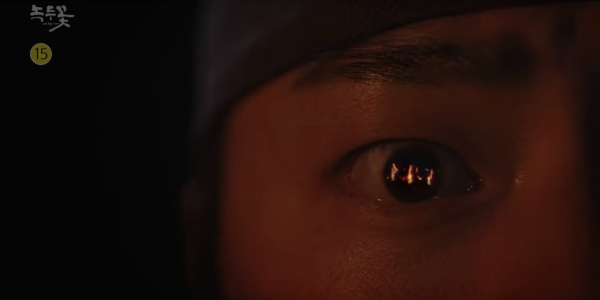 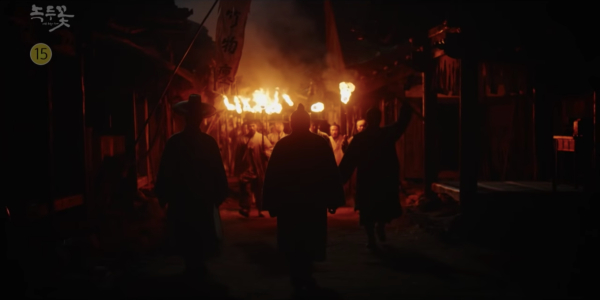 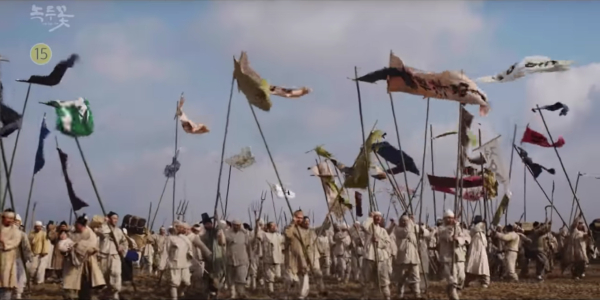 Finally there are promo materials for this drama (SBS have been releasing a longer teaser+bts with Yoon Shi-yoon and Han Ye-ri too). I've been waiting for so long for an update. The teaser already gave me goosebumps. And this drama will start airing after Haechi's finale eps, which means I'll continue to be drowning in long and serious sageuk for months to come.

drowning with you and loving it!

Looks like I'll be in good company with @diana-hansen and @gadis. Yoo hoo, @kiara and @marcusnyc20 bong-soo! YSY and JJS will be on deck soon. ;-)

@pakalanapikake Yay for the sageuk crew!

This is my most anticipated sageuk due to writer JUNG (no fantasy politics), Jo Jung-seok, Han Ye-ri and PD Shin is not too shabby either.
I have seen a couple of eps of Yoon Shi-yoon in a sageuk form here and there but this will be my first full sageuk with him in it.

This may be Jo Jung Seok oppa's first sageuk drama (thank you drama gods) but he is not a sageuk newbie. I love him in his sageuk films and he also played Prince Hodong and Jo Gwang-jo on stage.

I'm so excited I can't stand it lol.

I've seen Han Ye-ri in a few productions, the most memorable being her portrayal of the narcoleptic girl in ONE STEP MORE TO THE SEA and as the voice of Boggil in THE IMAGINARY CAT. I know she was in SIX FLYING DRAGONS and KUNDO: AGE OF THE RAMPANT, but my eyes were glued to the swordfights, TBH. Her turn in KUNDO ought to stand her in good stead in MUNG BEAN FLOWER.

Yoon Si-yoon gave a deftly-nuanced performance in GRAND PRINCE. He really delivered the goods, and looked great in hanbok. I can't wait to see him and JJS portraying brothers.

@pakalanapikake <3.
Han Ye-ri is one of my indie darlings. She is excellent in films and a good match for Jo Jung Seok.
She is also like Honey Lee when it comes to traditional dancing, music etc.

In her own words "Dancing helps me memorize action routines quickly too. In "Six Flying Dragons" the director initially thought of me as a musician, but when he found out I was a dancer he changed my role to a dancer and I appear dancing in the first scene".
https://www.hancinema.net/radio-star-han-ye-ri-is-both-an-actress-and-a-dancer-118227.html

PD Shin most likely cast her as lead in this drama based on her performance in SFD.
IRC her role in SFD was supposed to be a cameo but she was so good that they extended it till the last episode.

I hope she is on the people's side with our anti-hero.

Thanks for that dandy background information on Han Ye-ri's dancing, Sunbae-nim! I had no idea she is a dancer. I'm intrigued by her comment on kinesthesia and memory. The possibility of there being traditional dance and music in MUNG BEAN FLOWER as in REBEL is exciting. ;-)

@pakalanapikake, thanks for the shout out. I will be there.
I think there is a bit of confusion. According to AsianWiki on April 26, 2019 SBS's MUNG BEAN FLOWER will take over the Fri/Sat slot currently held by THE FIERY PRIEST (Episode 40-Final will air April 20, 2019.)
SBS's HAECHI will conclude with episode 48-Final on April 30, 2019.
According to its wiki page MBF is scheduled for 48 episodes.
Re: Jo Jung-seok. I know he is a fan favorite and I am looking forward to seeing his performance in MBF. The only drama I have seen him in was THE LEGEND OF THE BLUE SEA where he played merman Joo Jung-hoon.

Thanks for setting me straight on the premiere info. I've duly updated it in my Kdrama log. Yikes to having overlap with HAECHI's finale. Fingers crossed that my bandwidth can handle both of them. Methinks that one week will be a doozy. ;-)

Re: Jo Jung-seok, he's the bee's knees. His merman cameo in LEGEND OF THE BLUE SEA was my introduction to his acting, and prompted me to marathon JEALOUSY INCARNATE in about 3 days in late July, 2017. I loved him to bits in that show (whose title can also be translated as "jealous Hwa-shin," JJS's character's name). He and Gong Hyo-jin (the killer noona who tamed Gong Yoo in BISCUIT TEACHER AND STAR CANDY) are terrific together as a TV news anchor and a weather girl. Added bonus: He dances up a storm.

Immediately after that, I marathoned THE KING 2HEARTS, mainly for JJS's show-stealing performance as career soldier Eun Shi-kyung. Fondly referred to as "Earnest Bot" by Beanies for his humorless, serious, idealistic character traits, Shi-kyung is the kind of loyal friend and taskmaster who serves as unswerving support for the self-centered prince who is suddenly thrust onto the throne. JJS's eye acting is terrific. Shi-kyung is a man of few words but deep passions. When he does finally express his feelings verbally, he's actually very eloquent. But his actions have spoken all along. Alas, he is often misunderstood by just about everyone. He's one of my all-time favorite Kdrama characters. Thank you, JJS!

After that, I made sure to live-watch TWO COPS. JJS and Kim Sun-ho were terrific as a cop and a comatose con man with 49 days to go before he heads off to the afterlife -- who are thrown into a body-swapping partnership to solve a fellow lawman's murder -- and end up uncovering the truth of other crimes as well. JJS is simply phenomenal as he channels Gong Soo-chang's facial expressions, speech, and mannerisms to a T while (usually) involuntarily occupied by the latter's spirit / consciousness. The bromance is strong in these two. Added bonus: Park Hoon, uri Dal-moon in HAECHI, and Lee Jae won (LEGEND OF THE BLUE SEA, currently in KILL IT) are also in the cast, along with Lee Si-un in a show-stealing really long cameo. As a connoisseur of multiple roles, I think you'd like this show, despite its beaucoup plot holes -- but I would watch JEALOUSY INCARNATE and THE KING 2HEARTS first. And check out @lollypip's closing comments in the finale recap. ;-)

JJS is also great in the film MY ANNOYING BROTHER.

Jo Jung-Seok: I think he's good but I've only seen him in KING 2 HEARTS, with a really a heart-stopping/heart-breaking performance.

so excited! got to have a steady dose of jo jung seok on my screen! looking forward to all of them! yoon shi yoon always makes me smile! this year IS getting better in the drama world :)

Thanks so much for the MUNG BEAN FLOWER update, @tipsymocha! I've been wondering when there would be some news. I didn't realize that it will follow HAECHI, which has 5 more weeks to go.

While this show is Jo Jung-seok's first historical drama, it ain't his first sageuk rodeo. He's already done the films THE FACE READER (2013) and THE FATAL ENCOUNTER (2014). I'll have to check them out before the drama commences. ;-)

I've put HAECHI on hold to marathon later. Everything is a bit too familiar so I feel like I'm not missing out much if I watch it later. Yi Tan is not as captivating of a sageuk villain and the actor does nothing for me.

@kiara, I can't say as I blame you. On the other hand, Yi Tan wised up after he got back from China, so he's actually using his brain now. I'm still enjoying Jung Il-woo's performance, and hoping for more backstories to be divulged. ;-)

I decided to marathon it as well.

I forgot this was by SBS as well. They're really bringing the sageuks. I hope haechi climbs the ratings and this succeeds as well; we could (well, by 'we' I mean 'I') could use more sageuks...
Although this looks too depressing for me to "enjoy"... lol. Yes, I am of the historically-based but heavy on the fantasy, mbc circa 2000s sageuk variety lover.

Ohhhh I've been craving this kind of sageuk and tbh, I havent finished one since SFD. Bring it on!

I'm sooooo ready for more Yoon Shi-yoon. Jo Jung-seok and Han Ye-ri being here is an added bonus - I think I'll find this difficult to watch, but I need to give it a try.

There weren't many other people who managed to sit all the way through Grand Prince. Right, @wishfultoki?

@frabbycrabsis, This gives me an excuse to post the video below. lol.
I really enjoyed and finished GRAND PRINCE which was my first Yoon Shi-yoon drama. I am a YSY fan for life. We had a ball commenting on the hijacked thread.
This is a short soompi piece with video of the three GP leads after the drama ended ended holding a hug session to fulfill a ratings promise. I love it. (Also this was the first time I saw YSY not in costume.):
https://www.soompi.com/article/1167431wpp/yoon-shi-yoon-jin-se-yeon-joo-sang-wook-fulfill-promise-holding-free-hug-event-grand-prince

@pakalanapikake, I'm pretty sure I left a few comments on there?

Aw, let me rephrase that so we don't leave out bong-soo: "Let the YSY fangirling and fanboying begin." Gentlepeople, start your engines. ;-)

Re: @pakalanapikake, I'm pretty sure I left a few comments on there?

Yes indeedy, frabby, you participated in the GRAND PRINCE discussion. ;-)

@wishfultoki,
I'm looking forward to it, hopefully with poignant flashbacks of Dong-gu Daegun, Park Gi-teuk, and Ru Shi-gae slogging home from Manchuria. Plus a fake-out in which RSG survives. ;-)

It's all I want in the world.

Yes! We finally have a premiere date. :)

I'll have to watch the teaser when I come home from work.

Thank you! I haven't been that much of a presence on Dramabeans. Things have been so busy.