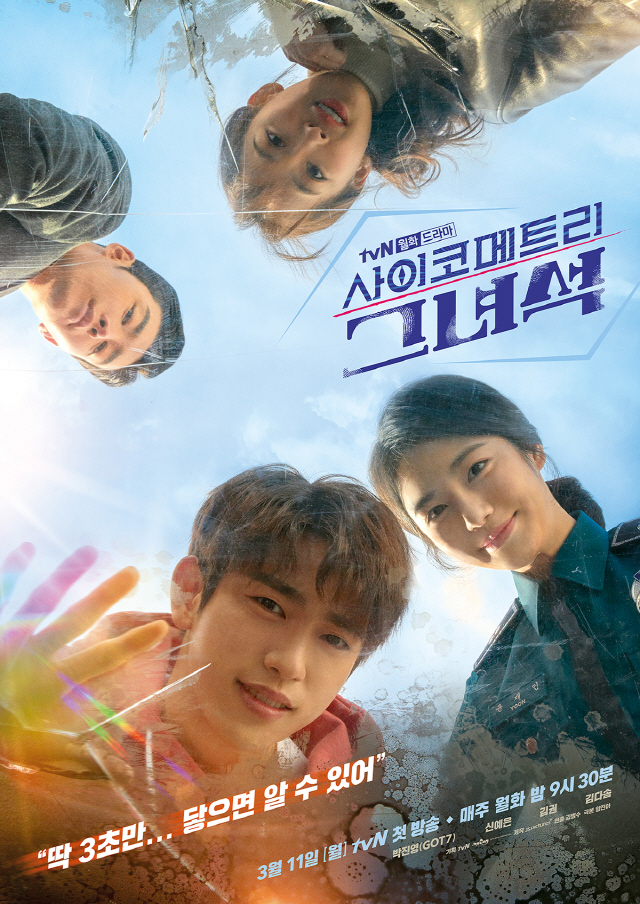 Reasons to watch: Life can be tough, but having a paranormal gift has to be useful, right? Let’s hope so since that’s really all Lee An (Got7’s Jinyoung) has going for him in That Psychometric Guy. Well, that and his good looks and personality. Lee An’s gift is the ability to divine information and secrets just by touching an object or person (psychometry) But he’s an utterly unremarkable student who’s only interest in life is to use his psychometric powers to solve crimes. While Lee An is remarkably good at uncovering secrets, Yoon Jae-in (rookie actor Shin Ye-eun) is a young woman who’s desperate to keep her secrets and scars hidden. The pair meet by chance and team up to solve mysteries together and their “working” relationship looks like it may quickly turn into something more romantic. Kim Kwon and Dasom round out the main cast as a prosecutor and detective respectively.

It’s finally here. Hope the best for this underdog cast 👊🏼

First day was mediocre, but I'll stick around for at least one more...

Yay! I'll definitely be watching! I hoped it gets subbed soon. So far it is still at 0% 😭😭😭

3 YY Chats with Toast Between Bites

Does anyone have a butterfly net handy?

I admit I had slinked away, tail between my legs, both in awe and in fear of YY's rabid rantings. The zany and the zoological have migrated from one news story to the next like birds in spring.

We need a Doctor Dolittle to decode our friend's doggone dialect and do it at a gallop. Saddle up, friends. The animals have taken over the asylum.

@yyishere YY has truly gone cuckoo. Totally off her bird. And now might be crazy as a fox.
Tip of the tricorne to Napoleon XIV:
http://www.dramabeans.com/members/pakalanapikake/activity/738163/

Rats! I kmew there wass somestink wroink whiff me. Ewe are saying I have tempoorarily lost mew mind. Ewe are tailing me that I have gone cuckoo in a nice way. I racoon ewe are right.

@yyishere YY,
Omo! You've got rock fever! Better shove off from that island pronto -- and land yourself a good role. ;-)

Adding this to my Mondays & Tuesdays.

Watched the first episode...need to watch one more to get a better picture. Shin Ye-eun is doing a good job for a rookie.

@jeanthierrycha Dru,
Did you happen to watch the family drama MARRY ME NOW? ? Kim Kwon played an insufferable chaebol heir who is the boss of two employees who knew each other as kids. O the humanity when he learns that his stepmom used to date his rival's dad back in the Lower Devonian. When the elders decide to tie the knot, he is faced with the unpalatable prospect of not only gaining a bunch of siblings -- but his employee as a ever-so-slightly-elder hyung. I loved his rapport with hyung's twin sister.

Sadly no,, i don't have the patience for 50-eps. family drama.. 😅
But I saw him in Heard It Through The Grapevine and sure enough that he's a promising actor. 😎

Dang, I didn't recall Kim Kwon's being in HEARD IT THROUGH THE GRAPEVINE. (Ko Ah-sung, on the other hand, and her In-Laws-From-Hell, were excellent. -- She was all kinds of terrific in LIFE ON MARS as Officer Yoon. The whole cast was fantastic.) And that bizarre hanok-within-a-warehouse was practically a character in its own right.

I understand about lengthy dramas. It's particularly disappointing when they go south after you've been watching for 30-40 hours. You could watch a few random episodes and see if you stumble across himself having an excruciating blended-family dinner. ;-)

It's a small role, but memorable to me. The new young lawyer in the law firm,, that's Kim Kwon..

I Youtubed Marry Me Now for a glimpse of Kim Kwon and found out that Park Se Wan was in it too!! I love that girl..
Thank you, I'll watch some random eps when I got the chance!!

MARRY ME NOW? lost me when it introduced Pick's disease. My Mom was diagnosed with probable Alzheimer's in the late 1990s, and the mother of a friend had Pick's, which was even worse than Mom's case because of the hallucinations. Sorry, Writer-nim, but if you're going to use these dreadful neurological conditions in a plot or character arc, please make them believable. Better yet, please spare us.

I watch family dramas for entertainment and escapism, not to be reminded of real life. The thing that bothered me was how the female lead pissed away all that time until she began losing her marbles. It also struck me as unlikely that the law would allow someone with compromised mental faculties to get married. At any rate, I felt bad for her old boyfriend, who waited patiently for her. (I'm a bit iffy on the ending.)

On the other hand, the baby's birth secret was one of the most creative ones I've ever seen. And Lee Sang-woo was all kinds of charming, as usual. ;-)

I really hate it when Fantasy dramas break the rules of the powers or when they don't assign rules to the powers given to that person or when they assign it to times of need only.

Let's say you know Teleportation. You can teleport to any place you go to only if that place is a place that you went there. Let's suppose that your gf/bf is kidnapped and you don't know where they went to. The obvious answer would be to go to a place you've been to from before or seen, right? Well, you do that but still no luck. Then in SOMEHOW, some way, you manage to find the place despite the fact that the place was never in your knowledge.

And for an another one, let's use fire powers. Your fire powers only activate when you touch something/someone and they are set on fire. So this woman/man is falling from the sky and somehow, SOMEHOW, you manage to catch them despite the fact that you burn everything you touch.

I really hope this doesn't happen in this drama. If anybody can recommend me a drama that doesn't have these thing happen, i'll be pleased.

(reposting because i had SO many typos in the original):

So I have a lot of mixed feelings about this show, but I am hoping for the best...but also waiting to see. The idea of a guy who needs to touch people to get their secrets and a girl who doesn't want her secrets out...is this going to end up being about a girl who doesn't want to be a touched and guy who is trying to touch her? I mean that's the seediest way to think of it, I know, but it feels like this could end up trivializing and "cute-izing" (what's the real word for that?) something that's actually really serious. Idk. Ever since I heard about the premise of this show, I had a sort of wary/uncomfortable feeling. The cast looks super cute, and a lot of beanies whose opinions I respect seem to be on board, so I have decided to keep an open mind and see what happens...but cautiously.

Haven't seen it so idk how the touching and power works, but this could be really romantic if their first mutual kiss is also her way to give consent in sharing her secret.

Anyway, the idea isn't new but knowing the premise and power, I'm reminded of how much I love ICHYV and how that drama became more of a human/healing drama than fantasy with the male lead not over abusing his powers. Fingers crossed for this one.

I saw a part in the teaser where they're on a bus and it hits a bump and the girl starts to fall over. He grabs her to steady her and at first she is shocked because she thinks now he knows her secret but he shows that his sleeves were covering his hands so he didn't make contact with her. So I don't think it's going to be about him trying to touch her and her not wanting to be touched. I think it will be more like him waiting for her to be comfortable with him finding out her secret.

ooOo ok! that sounds like something i can get into :) esp if she knows and he knows she knows and they are being cutesy NOT touching (did anyone ever see...what was it called...there was a pie shop...OH right--Pushing Daisies--anyway all the not-touching in that show ended up being so super cute).

I've heard of Pushing Daisies and wanted to watch it when it aired but I never actually did. It sounded super cute.

Pushing Daisies.....I'm still salty over it's much to soon cancellation.

Netflix should bring it back.

it was incredible and i will never get over its cancellation

The two episodes were mediocre. The story was messy. I will wait for the time jump to see if the story will be better.

So I was bored and I said why not, let us try this and wow this show is really good, engaging story, cute leads, I just love it!!!

Between this and "The Dude in Me" on Viki, I am in JinYoung heaven! So many jinyoungs, so little time!