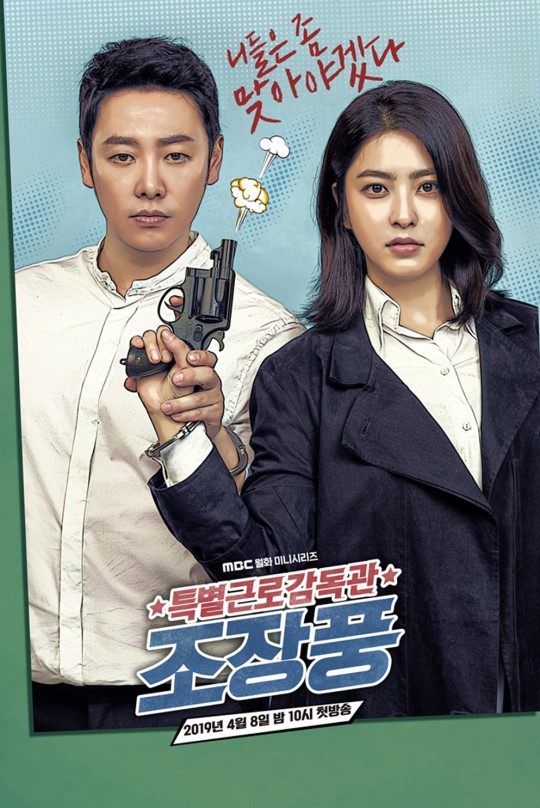 The central character of the drama is Jo Jin-gap, (nicknamed Jang-poong, which means strong wind in Korean) played by Kim Dong-wook. In another lifetime, he was a judo athlete and a phys-ed instructor. Those were the days when his strong sense of justice, quick temper, and zeal sparked him to fight against any injustice that crossed his path. Over the years though, he became de-sensitized and took a job as a civil servant. For the last few years, he’d been living an unexceptional life, but a job reassignment to the Ministry of Employment and Labor results in his life taking a turn. In his new position as a labor inspector, our hero encounters all forms of elitism, corruption, and other societal wrongs. The long dormant convictions inside of him begin to stir anew as he sets out to right the wrongs he sees.

In the new poster, Kim Dong-wook is pictured with Park Se-young, who plays the role of Joo Mi-ran.

Park’s character was also a judo athlete in the past, which is when she first met Jo Jin-gap and fell in love with him. The two married, had a child, and she retired from judo. But by the time we meet them, they’ve been divorced for 10 years. The two are on good terms though and share custody of their child. Post-divorce, she carved a new life for herself as a police officer who’s tough and plays by the book. When she sees Jo working as a labor inspector and changing for the better, she finds herself not unaffected by his renewed zeal for justice.

The poster hints at their complicated relationship by the positioning of their hands. He’s holding her hand, but she holds a gun in that same hand. Their hands are also handcuffed together. The poster’s caption says, “You guys are in need of a beating.” 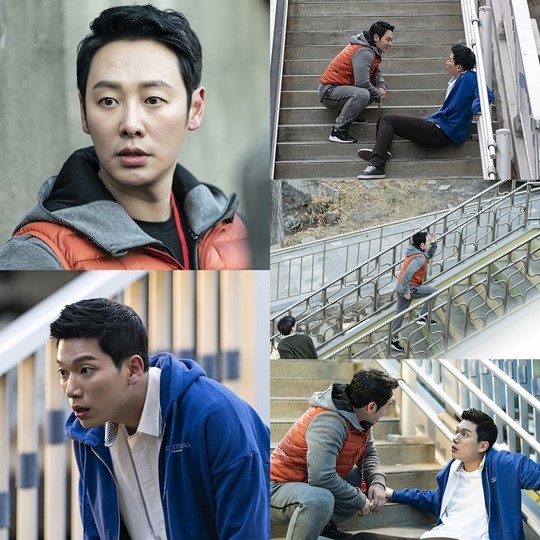 The new stills feature Kim Dong-wook with Kim Kyung-nam, who plays Chun Deok-gu. In contrast to his elegant and model-like good looks, his speech betrays an unrefined and slightly thug-like personality. In his high school years, Jo Jin-gap was his hero. But, that was 10 years ago; in the present, Chun runs a small neighborhood detective agency. Once the two reunite, he’s persuaded to become Jo’s secret investigator.

In the stills, the two are shown on the steps of a pedestrian overpass. There appears to have been a chase, and Chun looks taken aback as he speaks to a calmer Jo.

Directing for the drama will be helmed by PD Park Won-gook with writing done by Kim Ban-di who also wrote Angry Mom.

I couldn’t watch The Guest because I can’t handle horror, so I’m pretty excited to see Kim Dong-wook (and Kim Jae-wook!) coming back to dramaland in projects I can watch. The writer is also a big plus. Just a little over a week to go!

Will Kim Dong-wook get me out of my slump? Seriously though, this sounds promising. I like that they have a history beyond a romanticized childhood connection.

I have one motto in life: if Ryu Deok Hwan’s in it, I watch it

Still remember Ryu Deok Hwan and Park Se young as king and queen in Faith- very happy to see them working together again. Glad this drama is about job of labor inspectors- something different from usual

Oh yes I'm so excited for this even though they're not directly paired. RDH looks devastatingly handsome here gah! and the teasers look great

Is it just me or does Park Se Young look like shin Ye eun in that poster?

I’m excited for their shared history which I didn’t expect but will make for an interesting dynamic, also getting Kim Dong Wook and Kim Jae wook in the same week is an absolute blessing.

MBC is going full on auditing/inspectioning with their primetime dramas. We will have labor inspections on Mon-Tues and bank inspections in The Banker on Wed-Thurs. Maybe a crossover will happen. Who knows? It might be glorious if it happens. The Banker is good so far. I like it.

I am digging The Banker too.

It seems like k-dramas are beginning to explore different industries now, and I REALLY like it! I will check it out.

Hyun Mooooo! And bromance! I'm in.

I can't wait to watch it, gushhh... Special Labor Inspector Jo, beautiful world, Asadal, and My country is my anticipate drama.