Working together to find the real culprits in tvN’s Confession 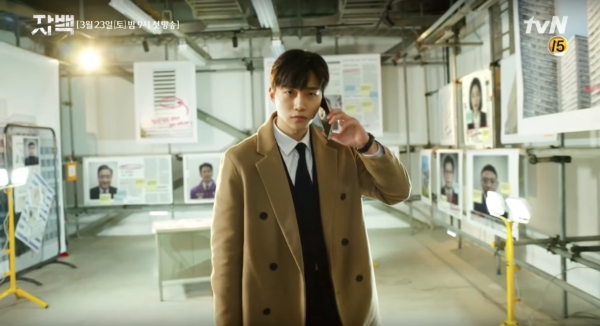 Aww yeah. Now that tvN’s Confession has all but confirmed that our two main leads Junho (Greasy Melo) and Yoo Jae-myung (Hundred Million Stars From the Sky) will be working together, I am ALL in. Even seeing their rapport in just these teasers has me excited to see their partnership come to life on the small screen.

The two teasers actually center around one conversation between our leads, each told through the perspective of either the former detective or the criminal defense lawyer. Junho’s character starts off the call by explaining over the phone what the prohibition on double jeopardy means: That once a judgment has been handed down, that case can’t be tried again. “That is the law. And that is reality.” He’s walking in what looks like an old warehouse, with a brightly lit room inside that hosts a bunch a pictures of potential criminals on the walls.

Yoo Jae-myung is on the other line, driving, and furiously points out the legal loophole for perpetrators, “Because of that godforsaken law, if the real culprit gets a not guilty judgment, then he’s forever innocent!” Junho meets Yoo Jae-myung as the latter pulls up in front of the warehouse and says, “That’s why a judgment is more important than the truth.” The former detective counters that that’s why they need to catch the real culprit.

I love this back and forth from two people who live and breathe in different areas of the law, and it’s that dynamic that I’ll be looking forward to when Confession premieres later this month. The courtroom thriller will air on tvN’s Saturday-Sunday slot from March 23, and will run for 16 episodes. 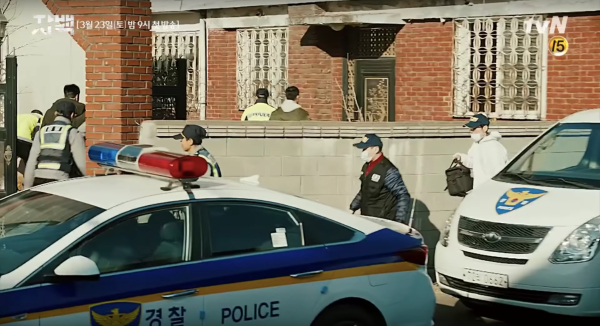 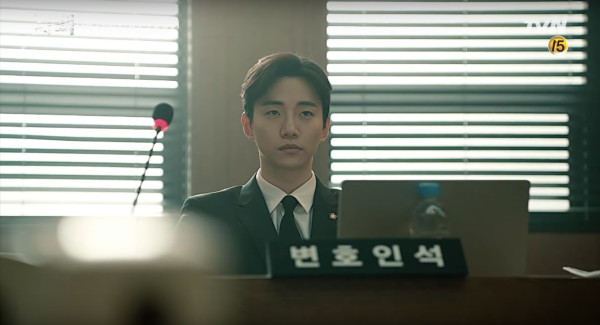 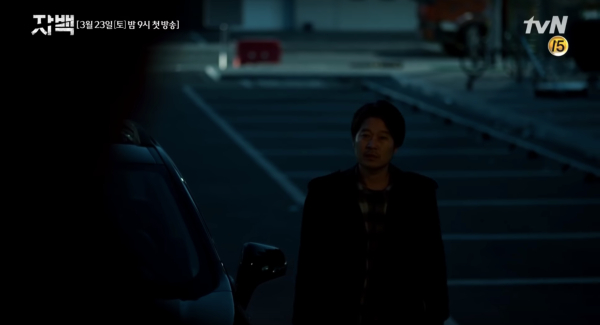 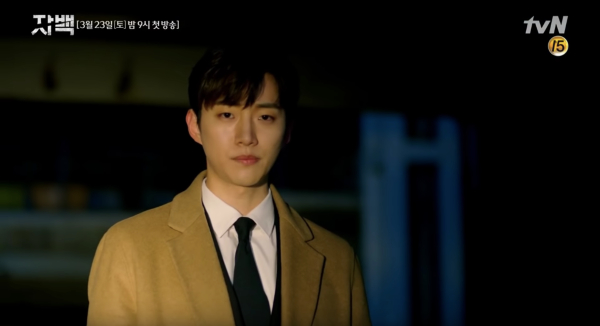 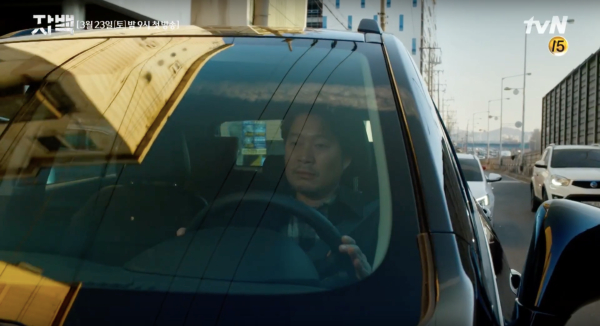 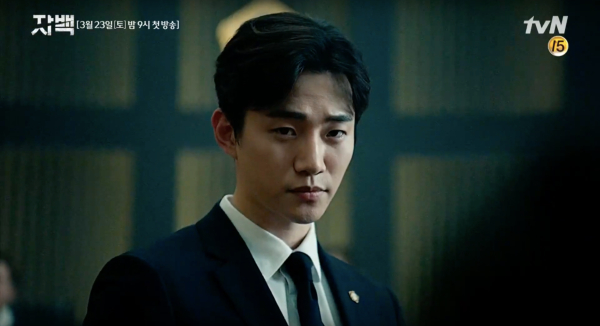 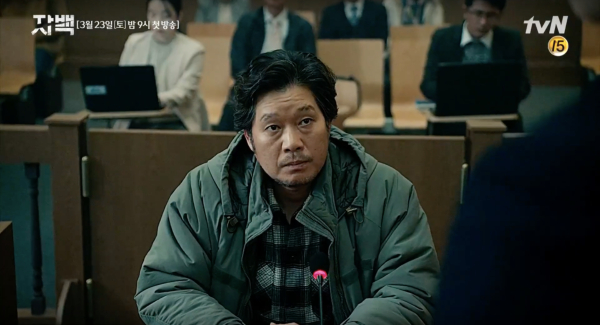 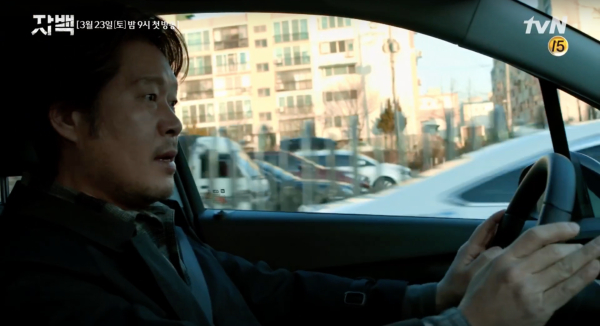 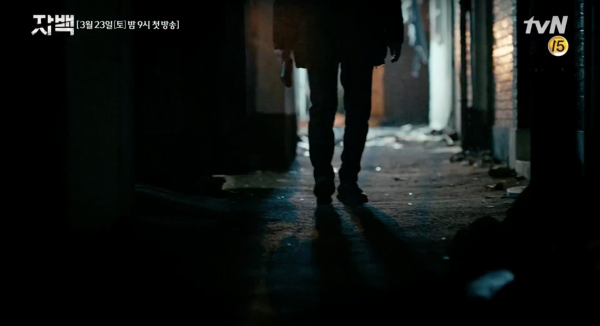 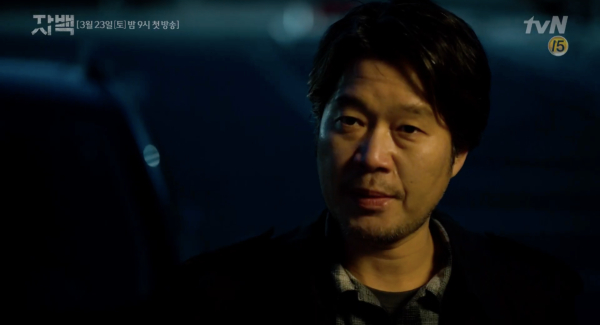 AHHHH, I just love Junho. After Seo In Guk he is my favorite idol turned actor. He never turns in a bad performance.

If we're talking about great idols turned actors, then Do Kyung-soo needs to be name-dropped here. He was already brilliant, but blew my mind in Swing Kids! 😍

Junho was my way into kpop after Just Between Lovers, and from him to discover Kyungsoo and he's also so talented and I can't get enough of those guys! Still trying to find a place to watch Swing Kids, though!

Of course! I've loved him since Shining Inheritance, and considering it was his first significant role, he did a pretty good job. And now... Well, his shows speak for themselves! 😂

I like this comment so much! Junho and D.O. are two of my favorite celebrities/artists period, and my heart swells when I (a) see them turn in AMAZING acting performances and (b) see them recognized for these performances. I haven't seen Swing Kids or this drama by Junho yet, but I am expecting a lot and looking forward to when I will be able to watch them.

They are also my favorite @smaltwalt :)
I'm very happy for all they've accomplished so far!

The initial teasers have been great in setting the mood, but these ones are really sealing the deal for me. I'm loving the chemistry between them already. And the way they made two separate teasers from the same conversation is so creative. I know the director is already a household name, and the way they've already got the mood set up makes it very clear why!

I don't think there's any dispute(to me anyways, hehe) that junho is hands down the best idol-turned-actor. I first saw his acting in chief kim(though I'd heard good things before) and he's impressed me since in everything. Not that there aren't other good idol actors, I just haven't seen the same level of nuance, versatility, and overall skill from the others. Excited for this one as well.

Gotta agree on that. He just owns the screen, so charismatic.

Funny that I like 2PM but never really notice him before. From 2PM, I can remember Taecyeon, Nickchun for the visuals, Woo Yong for the excellent vocal, Chan Sung for the superb dancing.

So I was really surprised to know he is from 2PM after Chief Kim.

Junho's the most well-rounded member of 2pm imo. I think casual viewers don't really notice him bc he's quiet and tends to keep to himself compared to his members, but he's the most stable at singing and dancing, which is probably why he's the most successful when they started doing solo projects. Anyway, I'm glad to see him gaining fans now, bc he's truly a gifed actor. And also bc he works harder than a mule lol, so it's nice to see the efforts paying off.

I am definitely saving a place for this drama!

As always, since this is a tvN production I am concerned about availability subbed. I don't see it on Viki's "Coming Soon" list (yet).
Viki title request form here:
https://vikiinc.wufoo.com/forms/title-request-form/

I really hope they pick it up.

As far as i know, double jeopardy means one cant be tried again for same case, unless there is new leads or prove that enough to overturn the judgment. So words “that once judgment has been handed down, that case can’t be tried again” arent entirely true. So do words “Because of that godforsaken law, if the real culprit gets a not guilty judgment, then he’s forever innocent!”.

Am i the one who missing something here?

I think the teasers were only 15 seconds so they want to pack in as much suspense as possible lol. But YJM's character saying that they need to find evidence to catch the real culprit seems to indicate that loophole. I think it's aimed more at building up a weary/jaded atmosphere around Junho's character after his father's guilty verdict?

hopefully he has gotten better at acting since JBL. he's so cute tho but going against yoo jae-myung? i would be terrified. i love YJM and will mostly watch things that he is in (well...i try) so i really hope this is really well written and enjoyable and well done.

tbh the concept/summary is a bit strange. so they're trying to find the real culprit even if they can't try again? and most likely they would put someone on trial for something else (i'm assuming.) also i am assuming it's not a procedural but like a convoluted puzzle which i love so.

Right, the setting is quite interesting. I'm hoping they'll tackle some grey areas and not have this be a black and white criminal drama. It'd be interesting to see them maybe try to forge evidence to indict the actual perpetrator on something else for example..

Yoo Jae-myung is life! One of my fave ahjussi.
I'm excited to see him in a new drama.

I thought he did amazing in JBL. Most actors would overact the melodrama, but he gave an understated performance that really impressed me for his first lead role. I'm not really worried about him going against YJM. He's had good chemistry with all his seniors so far.

he wasn't bad and won jin-ah is pretty green herself and they did well but, imo, it's def sth he needs to work at. so maybe he has! i dont have anything against him tho even if it was a glaringly obvious difference i like him enough. and btw i ADORE jbl lmao. his character included.

He went against Na Moon-hee in JBL and their scenes together were the most harmonious in the drama.

me saying he needs to work on his acting which is a very logical and not at all impolite comment = / = to me not liking him. i love the drama, i loved his character, their romance, and i adored his rship with her and and yoon se ah's character. he is good looking and fine at his job and i enjoy watching him.

There is always room for improvement! And the good thing about Junho is that he's the kind to take full advantage of working with more experienced seniors, so I can't wait to see what kind of synergy he and YJM will bring to the table.

i agree! I am gonna start chief kim soon so im excited. When i say i loved them in JBL i l o v e d them it was on of my fav dramas like every bit of it. i find many idol actors do not work on their acting at all but since he and won jin ah matched pretty well i can tell he tries. and maybe he’ll do some theater stuff during enlistment!

Junho with a new drama/project = me asking if this is his last one before he enlists— every. single. time

I think this is definitely his last drama. Not sure if he's going to release more music before enlisting though. Maybe he'll release a goodbye single like how many artists have been doing. But you're totally right I've been waiting for him to drop the enlistment date bomb every since 2019 started, but he just dropped new drama teasers instead 😂

Thanks for the CONFESSION teasers, @tipsymocha. Looking forward to an engrossing show with Junho. ;-)

just give me some junho in anything and i am happy! i can't wait for this to start.

Hoping to finish at least one of his dramas. Let’s see if this one will work for me.🤞🏻

Hahaha I was going to say, I've never finished any of his dramas. Although I find him really charismatic on screen and am drawn to his characters (especially in Wok of Love), but I've never finished Chief Kim, Just Between Lovers and Wok of Love. I can't exactly pinpoint why either. It's mostly the storyline itself rather than his acting though.

So I'm also really hoping I will at least finish one of his dramas although I don't think I'll be picking up this one as I feel it's too soon for him to be in another drama again when I haven't had a chance to miss his presence. Maybe I'll put this on the shelf for when he enlists and I've begun to miss him.

Since deciding to follow Junho's projects, I've been watching so many different genres of kdrama. Or rather the reason I started following is bc I know he's not the kind to take on the same genre twice. It's nice to see a young actor being brave with his choices and how that also opens up more opportunities, kdramaland is not pigeonholing Junho and it's great!

That said, I can't wait for a full length trailer, this 15secs teasers are really building up the hype.