Absolute Boyfriend finds a home at SBS for May premiere 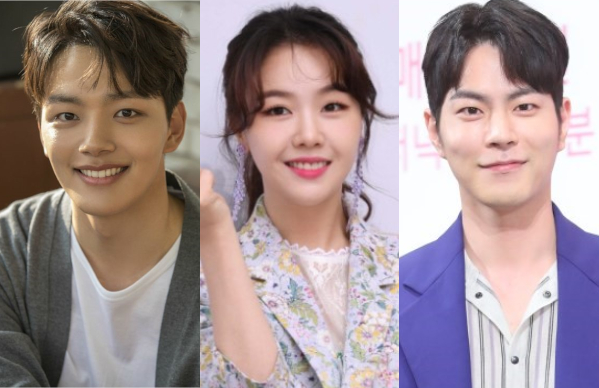 After nearly a year languishing in production hell, we’ve finally got an update and a premiere date for Absolute Boyfriend! SBS has decided to take the drama under its wing, and has slated the show to follow currently airing Big Issue. In case you’ve forgotten — like me — the sci-fi(-ish) rom-com will be headlined by Yeo Jin-gu (The Crowned Clown), Minah (Beautiful Gong Shim), and Hong Jong-hyun (Mother of Mine), and since the show is 100% pre-produced, that means Yeo Jin-gu will be appearing in three dramas this year in relatively quick succession, and Hong Jong-hyun will be in concurrently airing shows for several months.

Absolute Boyfriend is an adaptation of Japanese manga Zettai Kareshi, and will revolve around an improbable love story between a humanoid robot built for romance, played by Yeo Jin-gu, and a special effects makeup artist, played by Minah, with a hardened heart from a past love’s wounds. Hong Jong-hyun will play a top star with a prickly outer shell who is actually vulnerable underneath his porcupine exterior. We all know the type after a K-drama or two.

I vaguely remember watching the Japanese drama adaptation of the manga about ten years ago (man, does time fly), and the setup sounds a little different from both the manga and the Japanese adaptation: For one, the female heroine is a high schooler in the manga, and a normal office worker in the Japanese show. And the second lead is alternately a childhood friend of the heroine, and then her boss. But the main conflicts remain the same: Whether a robot and a human can really fall in love, and whether a robot can become more “human” with a will and ego of his own.

Absolute Boyfriend will be directed by PD Jung Jung-hwa, whose credits include Flower Boy Next Door and Flower Boy Ramyun Shop, while the adaptation will be penned by Yang Hyuk-moon, who also wrote Mirror of the Witch. I have to admit that there’s a lot of potential for disaster with this adaptation, but seeing the director-writer duo gives me some hope that this won’t be a complete trainwreck. Please don’t let me down, drama gods!

Absolute Boyfriend will air on SBS’s Wednesday-Thursday slot following Big Issue in May.

Yeo Jin-gu is such a good actor and even though we've seen this similar story already, I'll give it a shot.

after 4568935531 years, finally, FINALLY its airing. I love all three actors, I can totally see Minah playing Riiko, YJG without question will put a good performance no doubt and so will Hong Jong-hyun. But goddamit, why is he the second male lead agaim, somebody tell me why 😣😥

can't wait for this, seriously, I might be anticipating this more than yjg's other project with IU, was it hotel de luna?

I really wanted Jong Hyun to be a lead at least once before his enlistment. Sigh.

well, we might still have to pray for this for two more years to happen 🙏🙏🙏😊

Should we be thanking the production troubles of "Vegabond" for letting "Absolute Boyfriend" to step up and be the insert drama before the airing of "Vegabond" ?

hmmm, Mokomichi's splendid nakedness endearingly simplemindedness was my favorite thing about Zettai Kareshi -- tho i know Yeo Jin Goo has that sweet earnestness to pull it off.

Another robot-like human story, sigh...what can they do that will be different and innovative? Don't curse me, but I don't really like YJG, and HJH another second lead? Another sigh...

The bot has Exorcist option, with Priest and Shaman modes.

I’ll watch just for the actors in this. @outofthisworld, have you seen?

I have been a baaaaaaaaaaaad fangirl @ally-le so I am not gonna promise to watch. I saw news of this previously, not terribly excited at HJH being 2nd lead but I like Yeo Jin Goo and Minah too. The Crowned Clown didn't work too well for me although I dropped the show very early on. After that horrible show which YJG starred in after Two Worlds and Crowned Clown, I think I developed allergy towards his characters. Tried the weekend drama which HJH is in, nah. Maybe this drama is my last chance before he enlist.

I have hope for these two. Limitless hope.

Gak, I know exactly what you mean about the weekend drama, the writing and directing are terrible (as well as the make-up). Poor HJH, they have no chemistry but it isn't their fault.

Now that I've watched a very well written family drama, the bar is raised. It's virtually impossible to watch the weekend kdrama now.

And the well written drama is....

C-drama All Is Well

@outofthisworld - a c drama? I've heard of All is Well but I don't think it's on Viki. Will look again.

This don't seem like the kind of show to get subbed. It would be great if it does. Although the issues were very pertinent to the Chinese family and society, there are many which I think is universal.

I’ve been waiting for the Korean adaptation of Zettai Kareshi. And another Yeo Jin Gu drama, of course! I have watched the Japanese adaptation and I really love it. I remember crying at the final episode. Its OST “Okaeri” is also in my playlist even though it’s already a very long time since I watched this drama. I am so looking forward to seeing YJG again. I could only wish it was Kim Yoo Jung who will play the lead actress because I am shipping them for a long time now. But still I am optimistic about Absolute Boyfriend and couldn’t wait to watch it air this May. Cheers!

Thanks for the good news, @tipsymocha. I've been wondering when ABSOLUTE BOYFRIEND would see the light of day. I haven't watched a robot flick since ARE YOU HUMAN TOO, when I tuned in for Seo Kang-joon's Nam Shin portrayals, which were impressive. I skipped I AM NOT A ROBOT. Here's hoping it turns out well. I enjoyed both the FLOWER BOY dramas and MIRROR OF THE WITCH.

As much as I love Jin Goo, I was recently traumatized by a clown and worry about him playing another "perfect" character. But I adore Minah, and the thought of their deep voices rumbling together onscreen is hard to resist. Is it too much to hope for an evil robot twin? Cause there's only one thing I love more than Jin Goo--and that's Jin Goo. #Cray #NeverForget

@ultramafic Nam Joo-hyuk is Tall,
I can see it all now: Young-goo, The Bot Formerly Known as Night Tenjo, morphs into HAL, with a side of human Nam Shin. Or Mr. Data's evil twin, Lore, could teleport over from Omicron Theta. If all else fails, Bender would probably be only too happy to swoop over from FUTURAMA to raise cain in exchange for an unlimited supply of stogies. ;-)

Why do I have a feeling this will have a sad ending?

Because Hong Jong-hyun is doomed to be the king of characters named Wang who lose even when they win? ;-)

The odds are not looking good for Ma Wang-joon in ABSOLUTE BOYFRIEND -- a porcupine with a marshmallow center. I doubt that second-lead lightning will strike twice, but would be thrilled if it does. In which case we'll all be bummed out for the bot, who (hopefully) will not short-circuit and run amok a la Nam Shin the human, not the droid.
.
.
.
.
.
.
.
.
.
.
.
.
Wang Yo in MOON LOVERS fell off the Cliff Of Non-Doom, had fabulous accessories coordinated with Queen Mom's, and perfect Guyliner of Evil -- but was ultimately destroyed by her ambitions for him.

Wang Rin in THE KING IN LOVE got the girl, but fell off the Cliff Of Non-Doom because he had to leave the country and his best friend, who really was the wang. A rare instance of second lead gets the girl.

But Moon Lovers is when I fell in love with HJH Wang. I loved his evilness.
But really, he's playing another Wang? Oh noes.

I agree. HJH was terrific as Wang Yo, and did a fine job expressing his vulnerable side as well as reveling in evil deeds. With Taejo Wang Geon as King Dad and Queen YooShouldn'tHaveHadKids for Mom, Wang Yo's goose was cooked from the start. HJH's depiction of Wang Yo realizing the ugly truth of Mom's machinations was great, akin to Kim Ji-suk's sympathetic portrayal of Yeonsangun in REBEL.

I feel like going back to watch his scenes as Wang Yo because everything I've seen him in since then he's played (been cast as) a shy, quiet nice guy.

So Jin Gu is a sex toy? ...
Or does he only do platonic romantic functions...

Plus I haven't seen anyone actually address the robot sex toy option since Almost Human, and even then it was a side note...

Also yeah I see it's gonna take two years for the robot trend to die too.

I am patiently waiting for that

Yeo Jin Go. I forget this drama exist lol.... God. He is so workaholic. How can he afford to take 3 drama in 1 year? He needs a holiday after this year lol...

I love him to pieces but I'm skipping this. He shines more in serious roles.

Abit dissapoint with his drama choice as of late. Just like Kim Soo Hyun for me. I prefer him act in a more serious roles too. He will be wasted in this. Let's see if i can get past the first couple episode AB. Lol. He should be more selective.

I don't think I can watch this. I watched the Chinese version and ended up crying so bad afterwards. But while it was a sad ending, I loved how they ended it with those last ten seconds. (You would know what I'm talking about if you watched it. What a absolute kicker.)

I totally forgot this drama even existed. I loved the manga so the changes seem a little odd but so typical of a kdrama. I liked the idea of the main guy being the childhood friend and their transition into romance as the manga progresses. I love Yeo Jin-gu though and since I do have fond memories of the manga I'll definitely give this a try! Glad it finally found a home!

Hyun Bin and Son Ye Jin considering another drama...yes, please!
Vagabond still being filmed, pre-produced, won't show til later in the year. That's why Absolute Boyfriend made it.

FINALLY! I've been eagerly waiting for this!