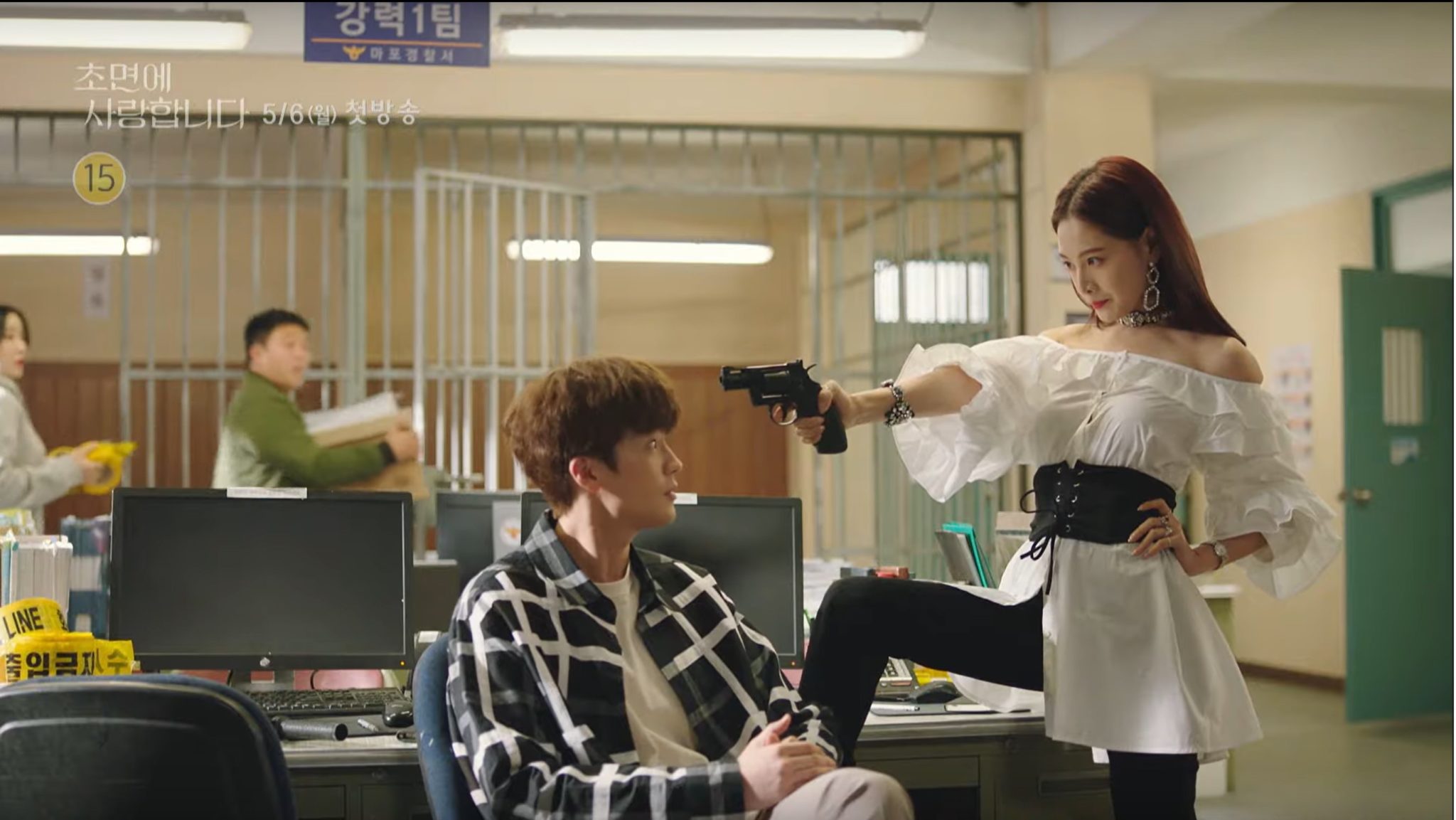 New promos have been released for SBS rom-com Love at First Sight including stills of Kim Young-kwang (Room No. 9) as well as a new video teaser featuring the second leads, Kim Jae-kyung (Bad Papa) and Gu Ja-sung (Misty).

The main story is about a troublesome man, played by Kim Young-kwang, who suffers from face-blindness after an unfortunate incident. However, in order to conceal his condition, he becomes heavily reliant on his secretary to be his eyes for him and stay by his side at all times.

Playing Do Min-ik’s dutiful secretary is Jin Ki-joo(Come Here and Hug Me). While on the job, a misunderstanding occurs and Do Min-ik falls for her while mistaking her for someone else–Kim Jae-kyung. However, instead of explaining what happened, Jin Ki-joo continues the ruse and begins leading a double life. 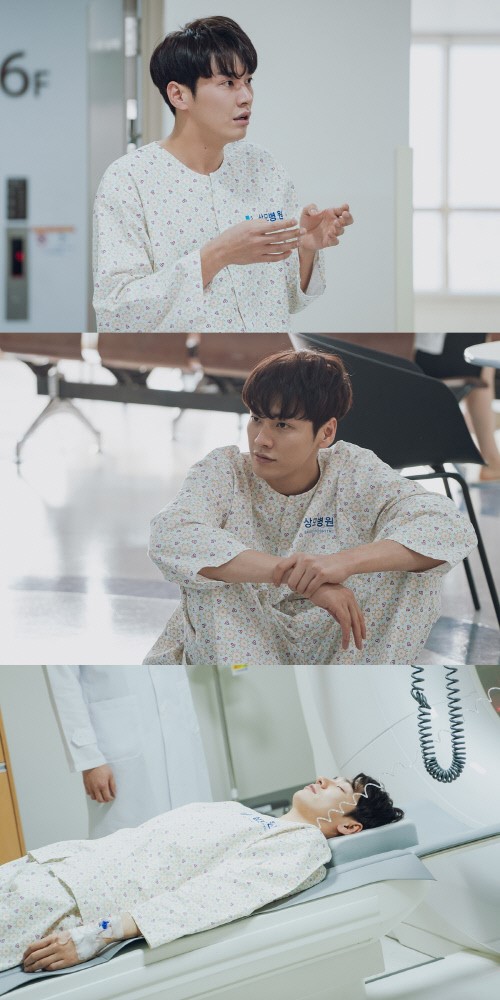 The newly released photos show Kim Young-kwang’s Do Min-ik at a hospital and having an MRI done. Although the details are unclear, the testing seems to be in relation to the character’s face-blindness.

The teaser focuses on the secondary pairing, Kim Jae-kyung and Gu Ja-sung who get a meet-cute and possible romance of their own.

Kim Jae-kyung plays an heiress by the name of Veronica Park. By all appearances, she’s chic and professional but in matters of romance, she’s awkward and clumsy. Still waiting for Mr. Right, she harasses her mother to arrange blind dates. But one day, she meets an ordinary man whom she finds alluring and she begins to earnestly pursue him.

Playing that ordinary man is actor Gu Ja-sung. The character, Ki Dae-joo, is friendly and personable to everyone around him. Yet, he is also difficult to read, has a guarded personality, and seems to be hiding secrets. Initially, he is taken aback by Veronica Park who is more direct and forward by nature. However, he finds himself not unmoved by her efforts to get to know him.

The teaser starts with an introduction to Kim Jae-kyung’s character. She’s seen greeting a crowd, then walking somewhere before she introduces herself by saying, “Nice to meet you, I’m Veronica Park.” The frame briefly freezes and text appears describing the character as: “Entertainment industry goddess. Cinepark Representative. Veronica Park.” Over the next sequence, we hear Kim yelling about the quality of a certain movie being as we see her tossing something behind her (a staff member runs back to catch it), then we see Kim pretending to make out with someone. The final part of the sequence cuts again to Kim Jae-kyung yelling at someone.

The teaser then transitions to a text screen that reads, “A man who cannot be broken appears before her!” We see Gu Ja-sung’s character meet Kim Jae-kyung. As we get a close-up on Gu, we hear him in voice-over, “You can’t drink alcohol using company money.” The frame freezes and text appears introducing Gu as: “The world’s most wholesome man. T&T Mobile, director Ki Dae-joo.” Gu narrates the next sequence of shots: “Did I tell you yet? Despite what you may think, I’m actually a bad guy.” As he narrates, we see Gu Ja-sung getting a glass of water thrown at him, walking through a police station, and then talking to Kim Jae-kyung.

The last part of the teaser shows Kim Jae-kyung dropping a spoon in shock before cutting to Kim and Gu at a movie theater together. He places her head on his shoulder as she seems to squee a little but that good mood won’t last as in voice-over, we hear Kim say, “You know how to tease women. I didn’t tell you something as well. I’m the crazy bitch who catches bad guys.” As she speaks, we see Kim holding her finger to Gu’s lips then the next shot is of Kim Jae-kyung aiming a gun at Gu at a police station. She seems to flip out while she judges a competition; the next scene shows her sitting at her desk, still steamed. The scene transitions to a text screen that reads, “An unpredictable romance between a crazy woman and a man who cannot be broken.” The teaser ends with Kim Jae-kyung and Gu Ja-sung standing together. Kim chirps, “Let’s go!” and starts walking away. Gu scoffs in response, but that scoff quickly turns into a grin.

Love at First Sight premieres in just a few weeks, on May 6, and will be airing Mondays and Tuesdays on SBS. 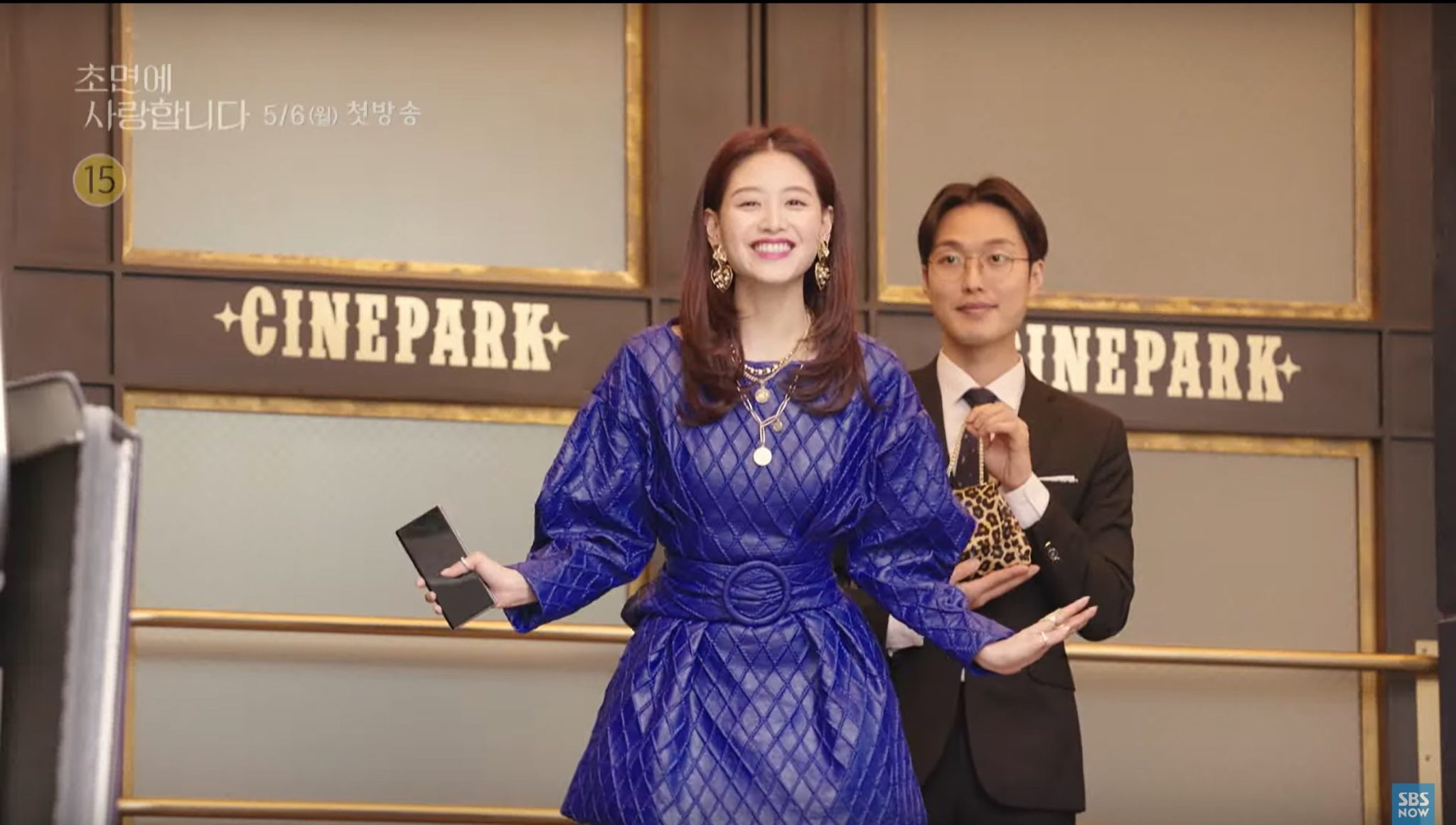 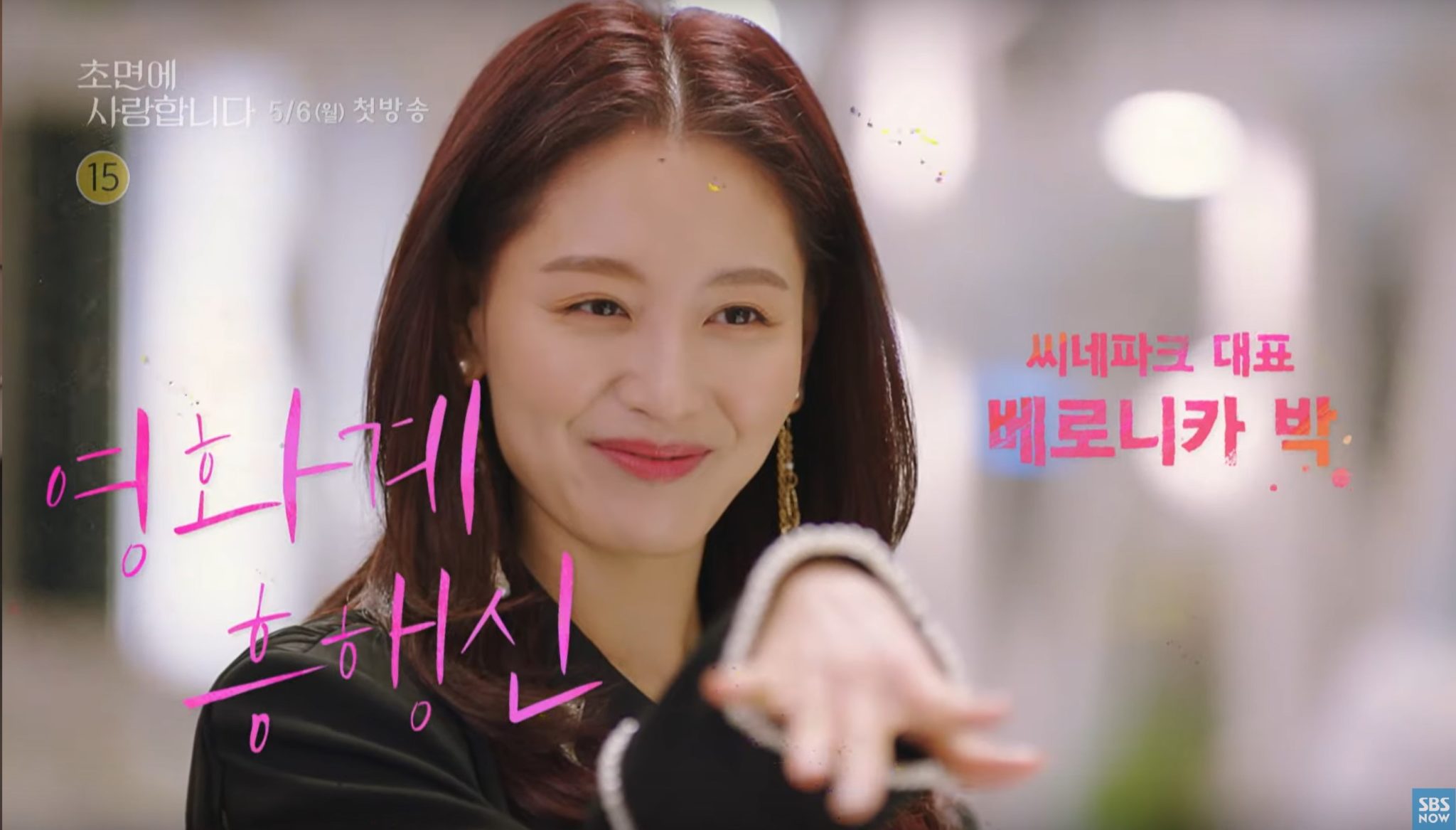 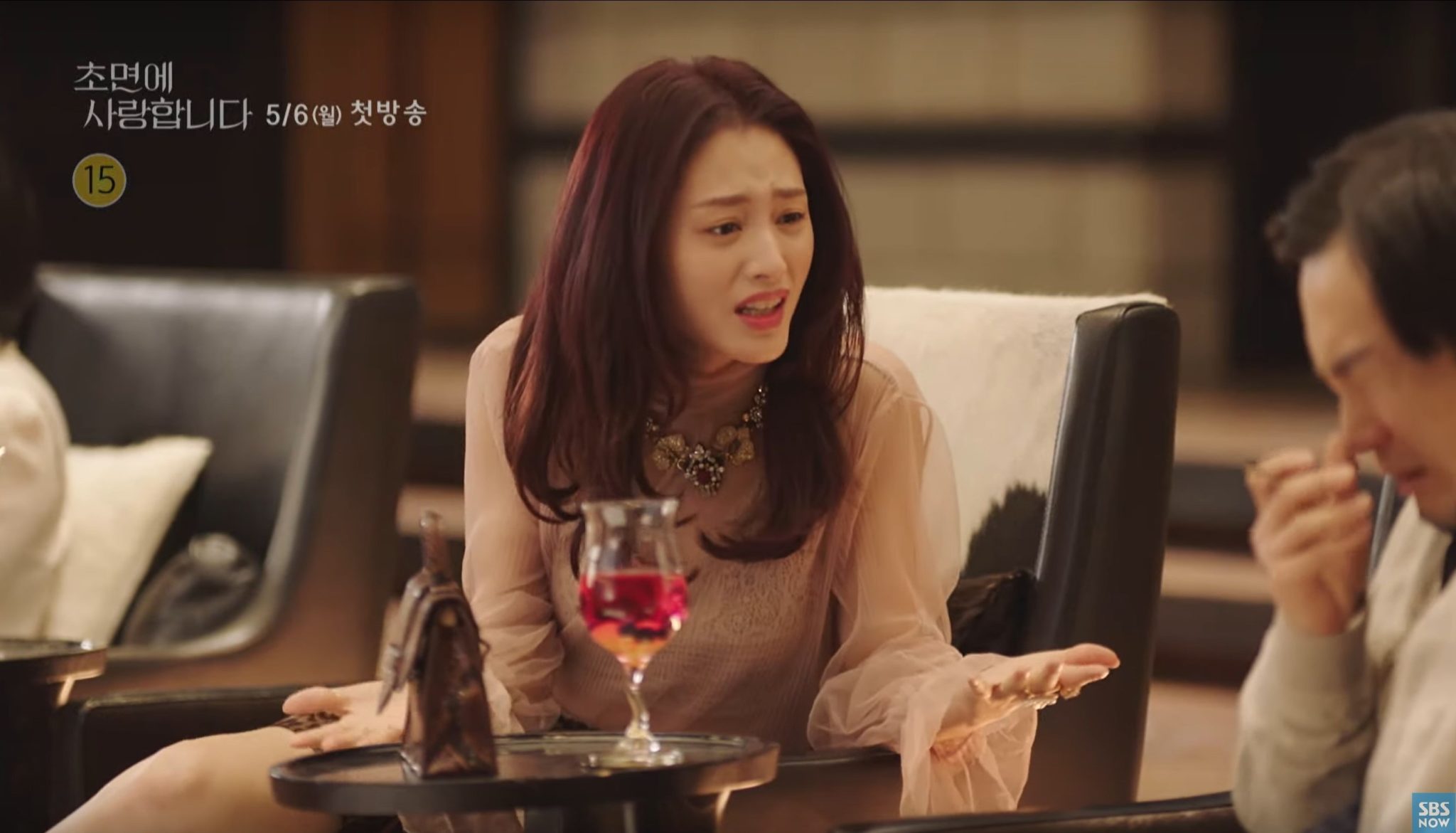 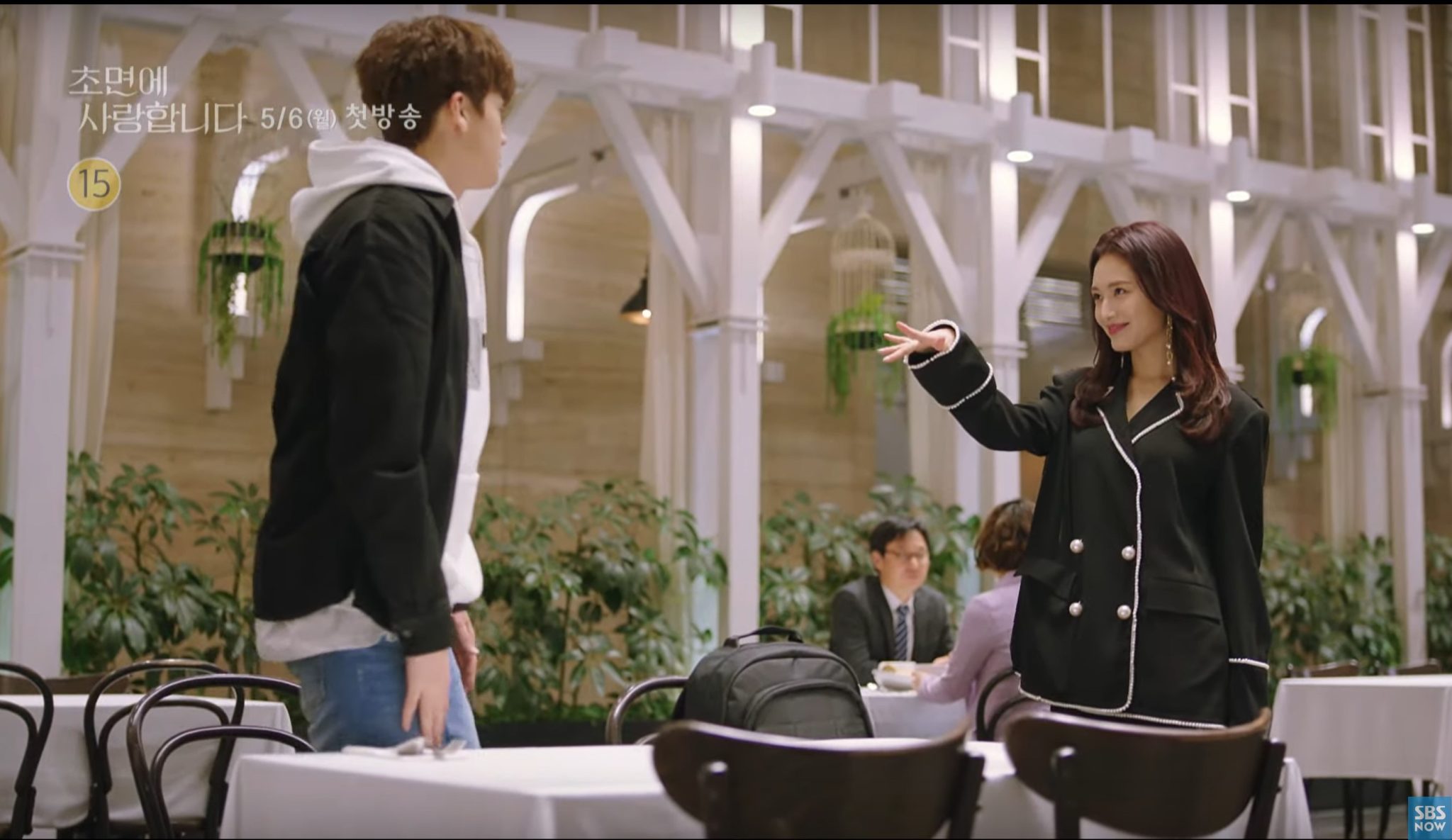 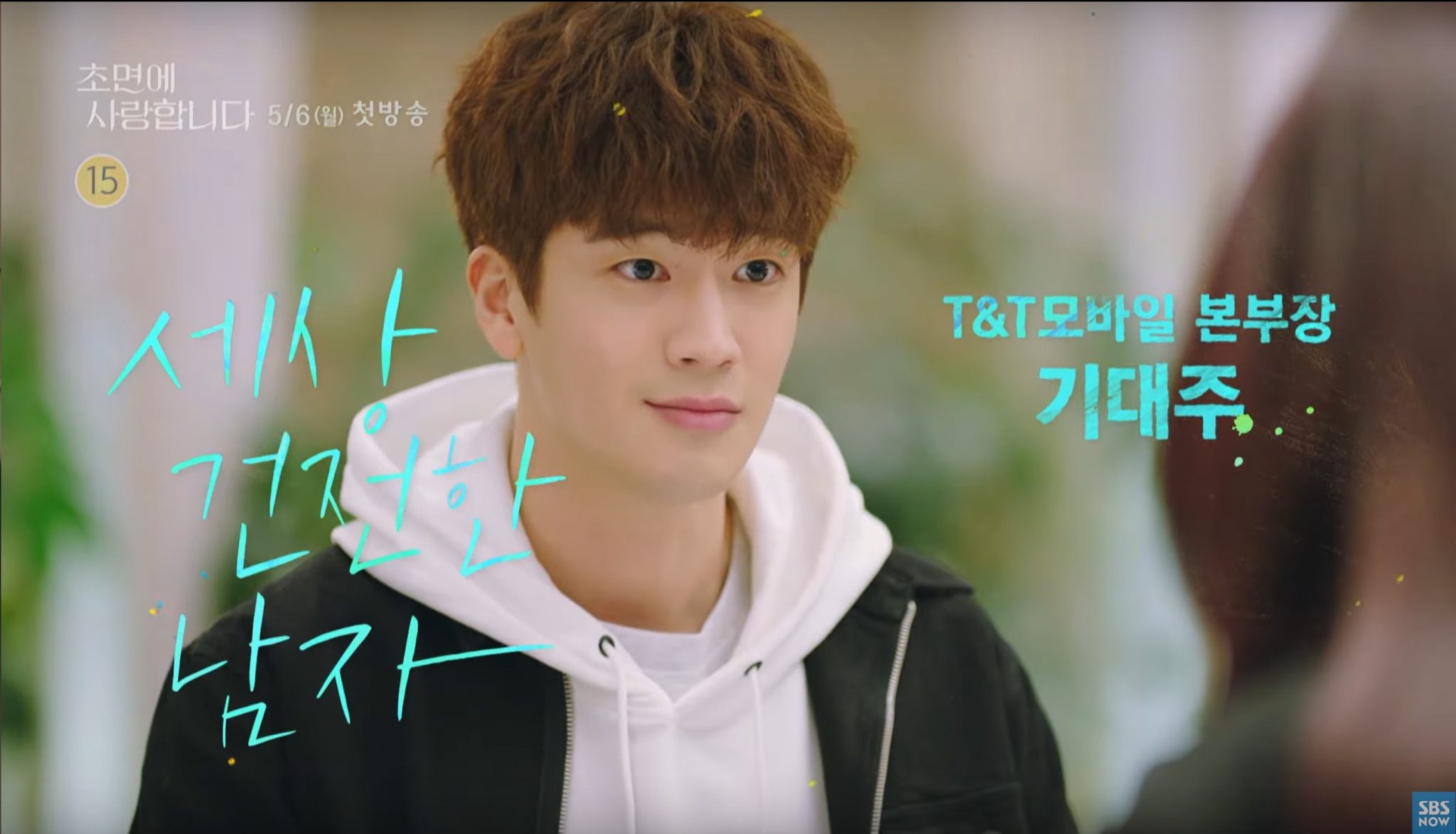 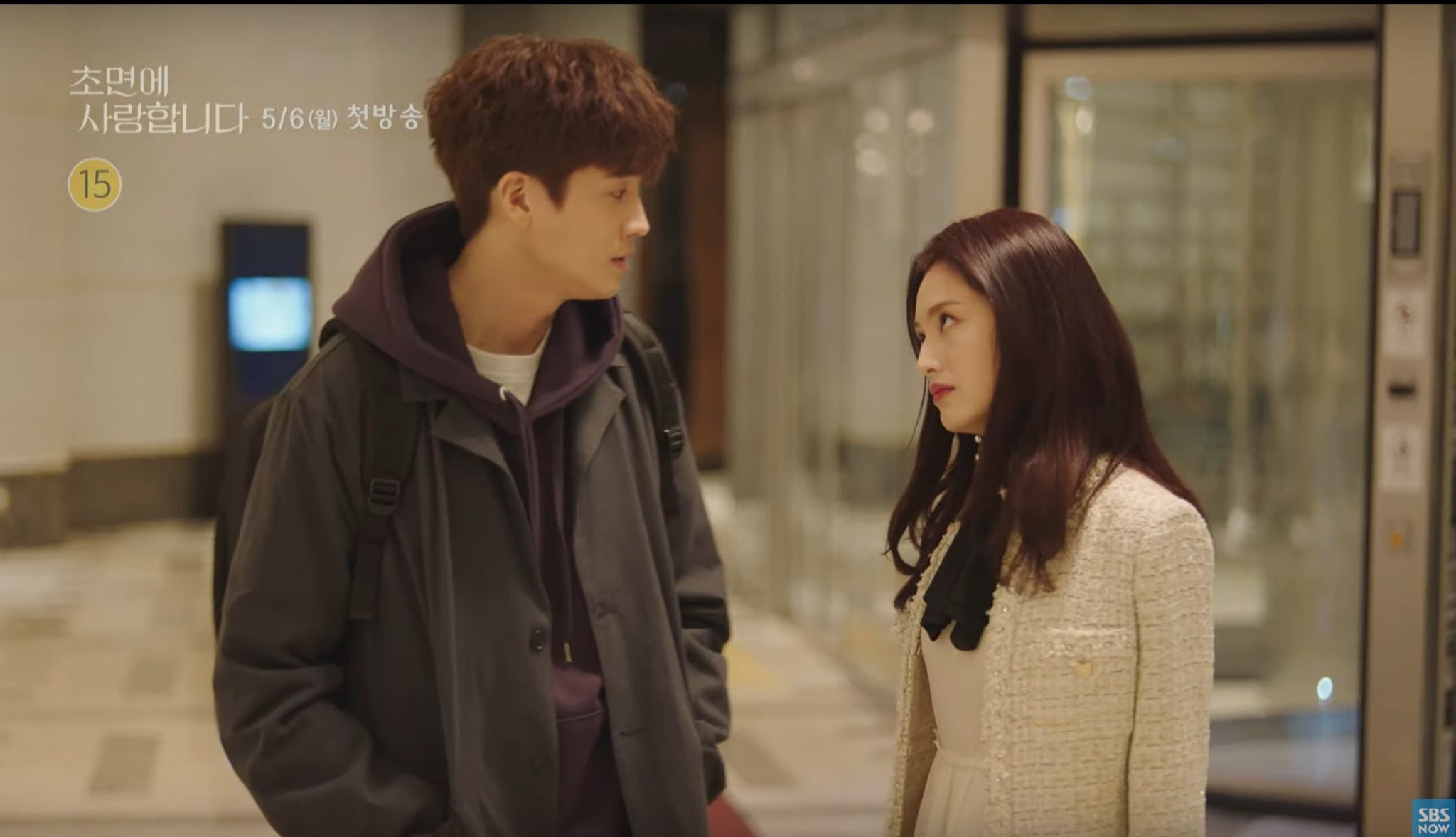 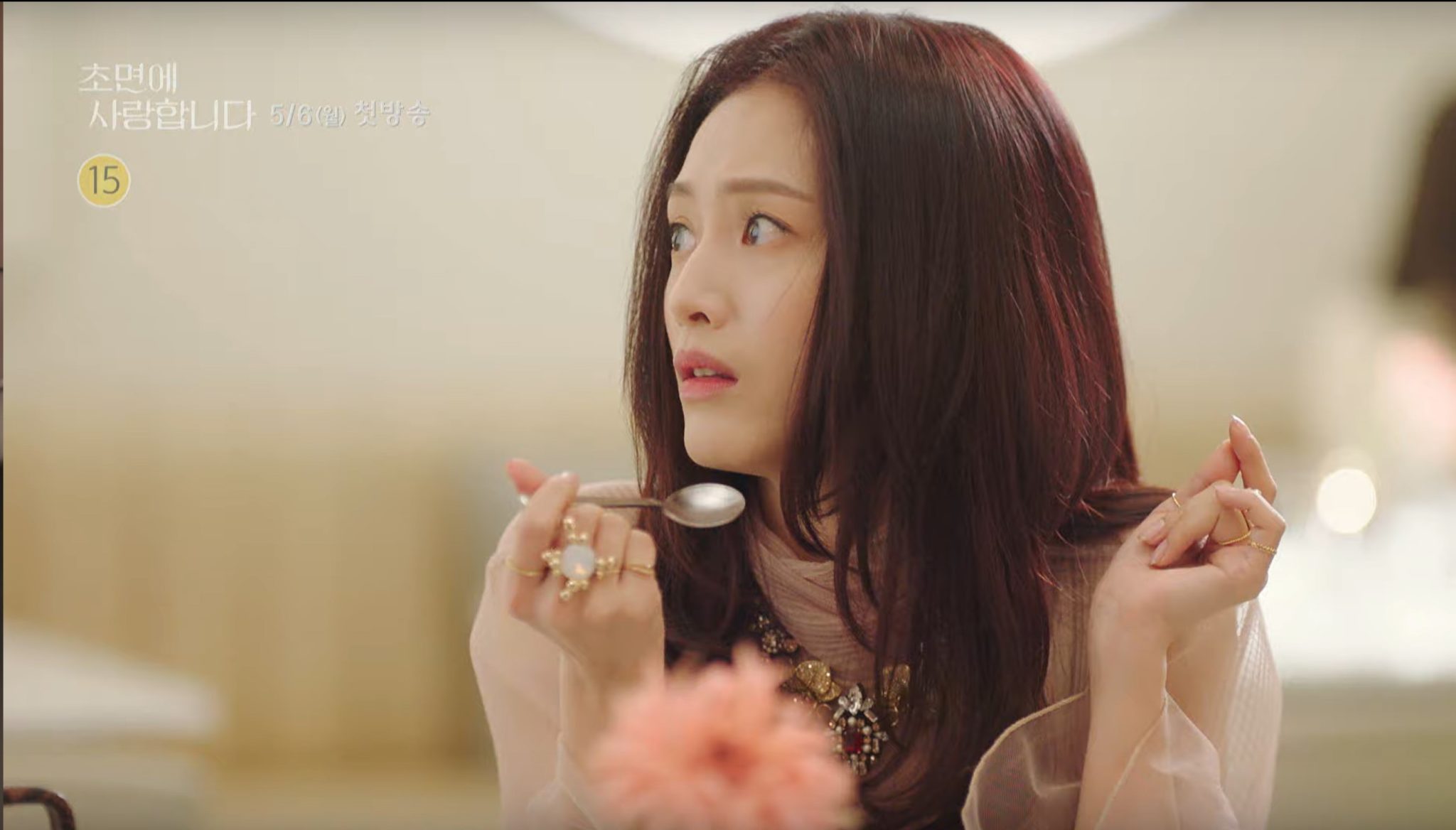 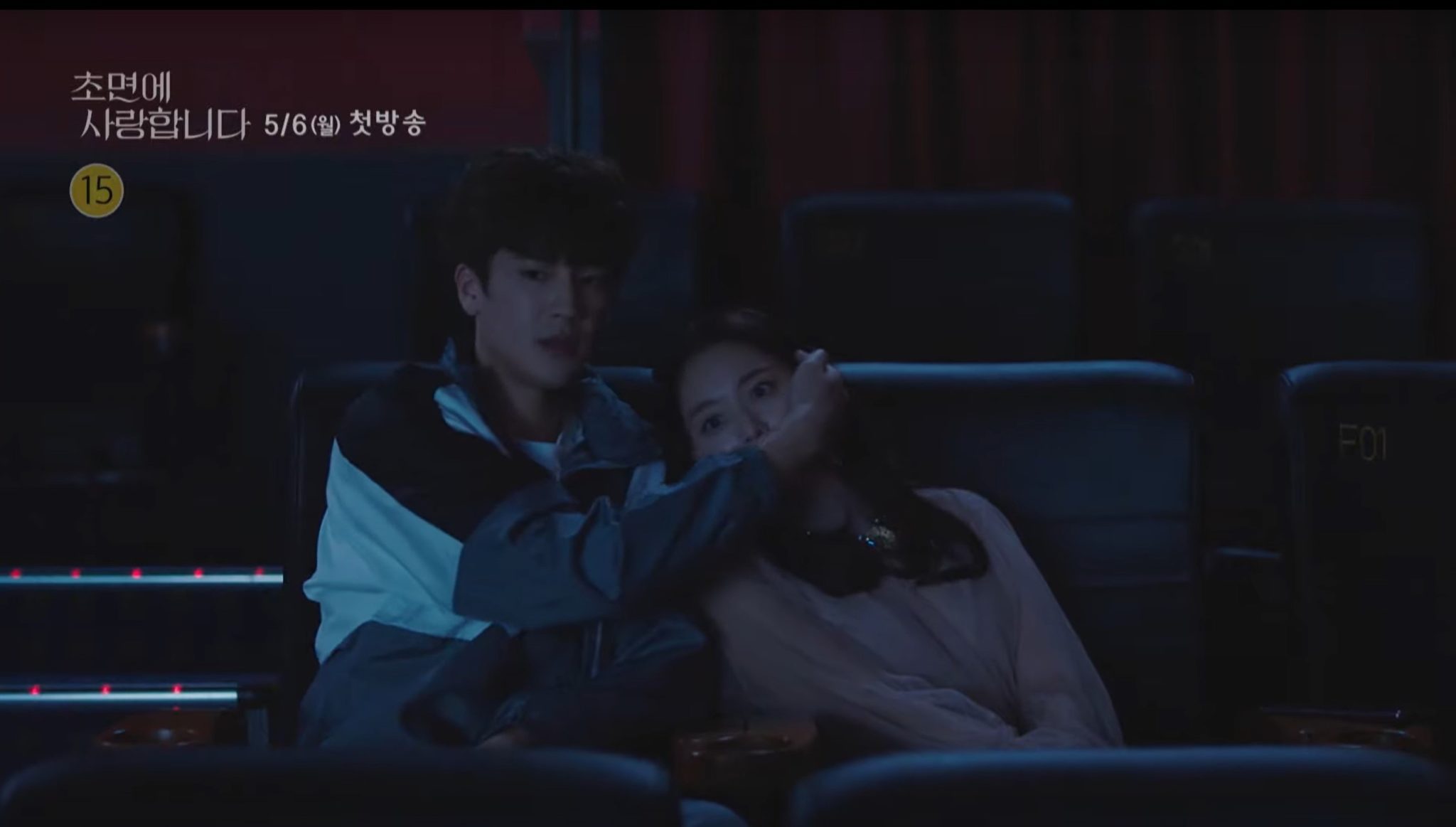 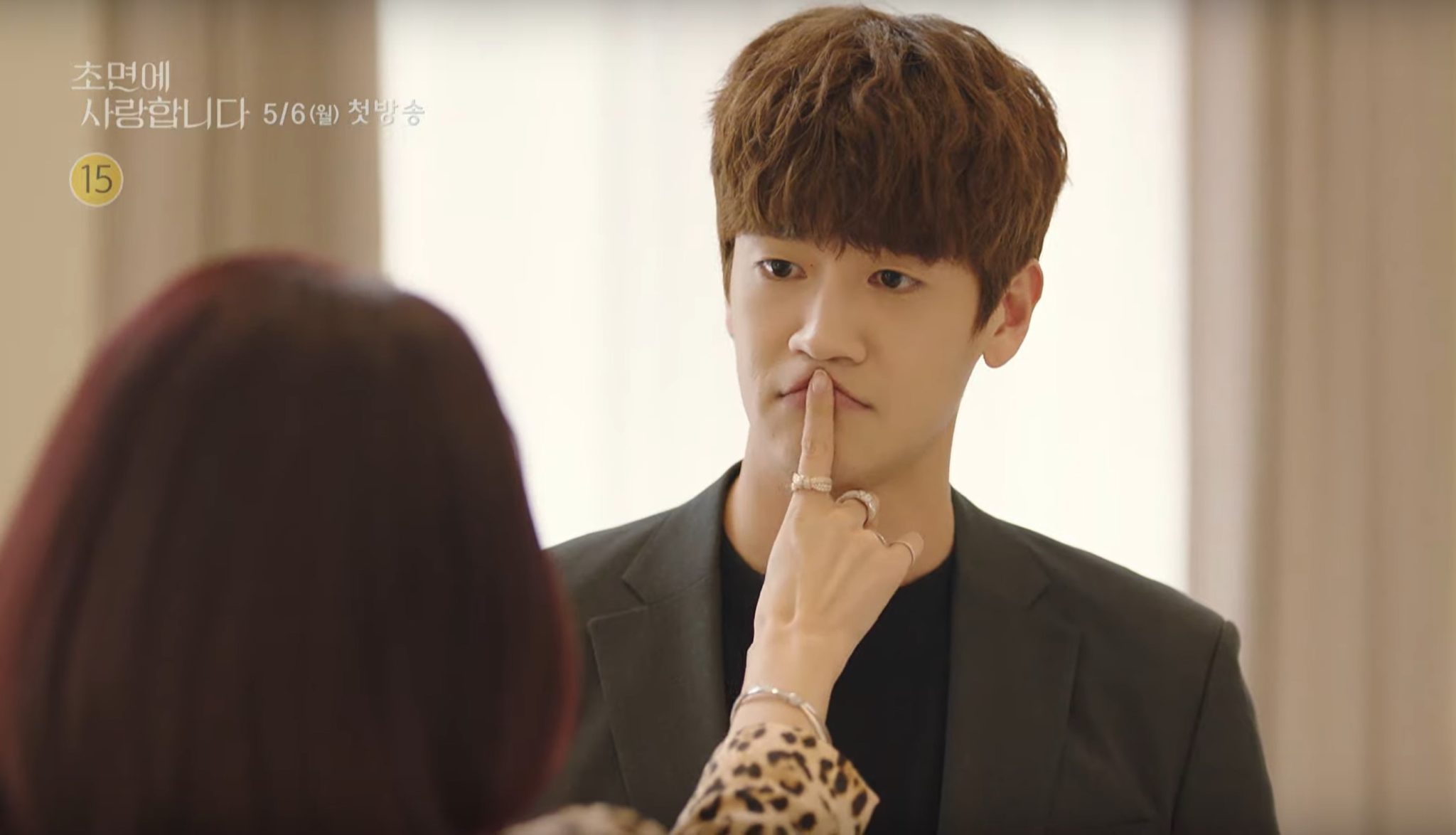 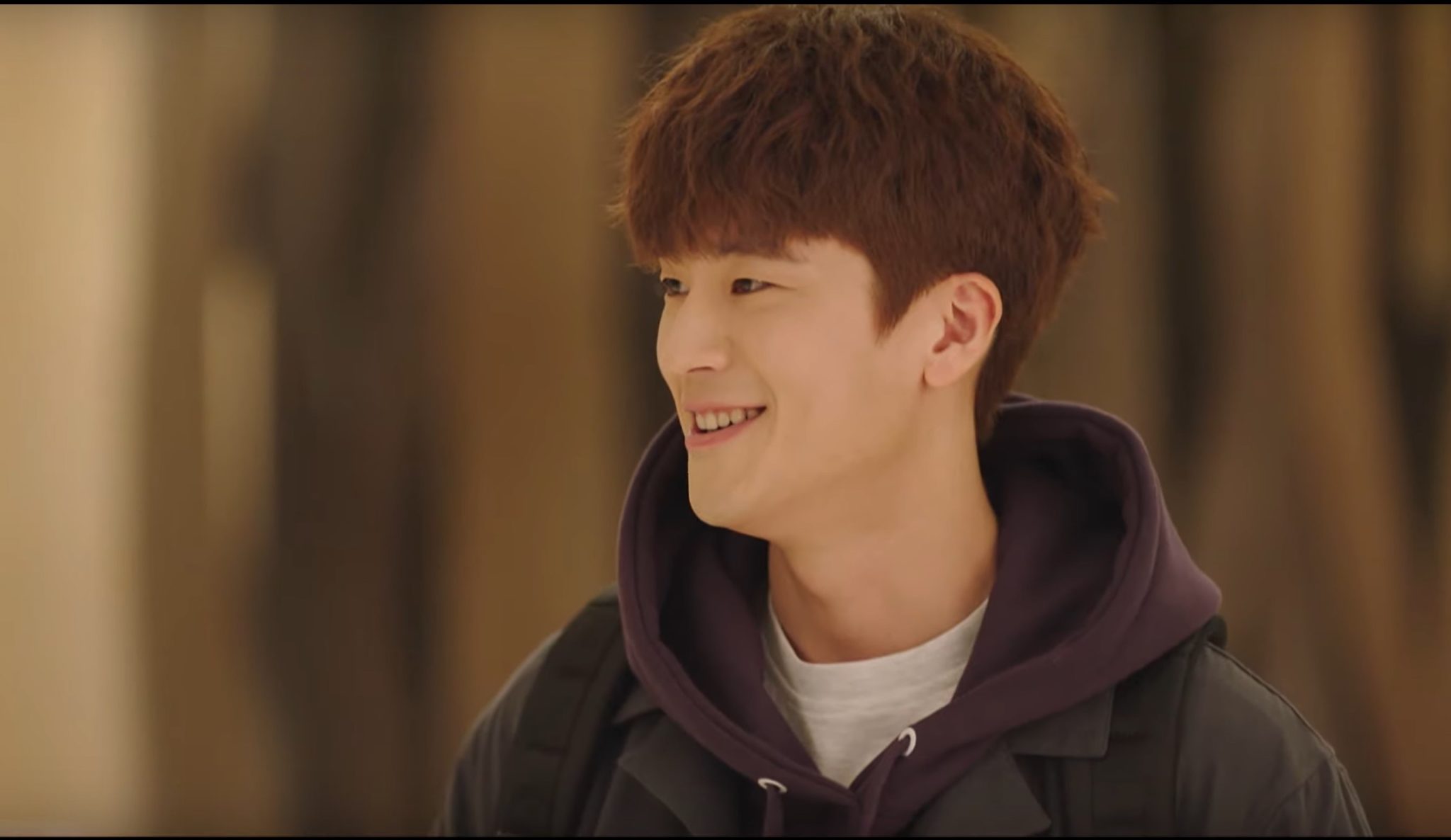 I'm looking forward to this one! the main leads already look great! I watched Come here and hug me last month so Jin Ki Joo is still very fresh in my head and can't wait to see her in something else soon!

Jae Kyung looks like a hoot and half and I am here for it! The second couple looks like they will be great fun to watch!

I'm here for this. She seems bonkers and I love it.

Kim Jae-kyung's character looks like a hoot! And aww yeah~ the cutie reporter from Misty is back in a romcom. :)))) I'm glad it looks like they'll have their own side romance from the start.

Both of them played likable characters in their previous dramas so I'm excited to see them together. Jaekyung will have the time of her life haha

This looks like fun. I've been waiting for Kim Young-kwang to follow up Go Nan-gil of SWEET STRANGER AND ME and LOOKOUT's Prosecutor Jang Do-han with a happier role, but Ki Yoo-jin in ROOM NO. 9 was not it. I've just about maxed out on prosopagnosia, however. I'll try to sneak a peek at LOVE AT FIRST SIGHT aka SECRET LIFE OF MY SECRETARY and hope to get an earful of his aegyo. It totally cracked me up in LOOKOUT as he busted the chops of fellow prosecutor Kim Eun-joong (Kim Tae-hoon).

kyk don't really do it for me but this looks super fun so i'll give it a shot...i mean, i've been converted to actors before

I’d have to kick her azz for pointing that gun in my directional.