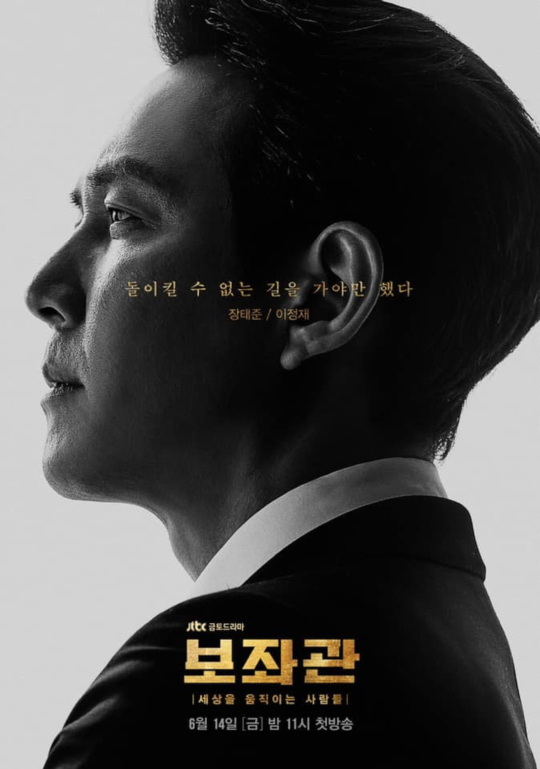 This probably isn’t the first time I’ve said this, and this probably won’t be the last either, but it must be said: This is one amazing cast. And though I’m not usually a huge fan of political dramas, I will definitely be checking out this show for this cast alone. JTBC’s Chief of Staff, which is set to premiere next month, has released character posters for each of the main players in the show, which includes Lee Jung-jae (Svaha: The Sixth Finger), Shin Mina (Tomorrow With You), Lee Elijah (An Empress’s Dignity), Kim Dong-joon (About Time), Jung Jin-young (Sketch), Kim Gab-soo (Haechi), Jung Woong-in (Ms. Ma, Nemesis), and Im Won-hee (Room No. 9).

I feel like whenever character posters like these are released, they do a pretty good job of describing the character with their one-line captions. Lee Jung-jae, who will be playing the chief of staff to Kim Gab-soo’s character, says in his individual poster that “I needed to go down this road I cannot turn back on.” Shin Mina, whose character I’m most looking forward to as an ambitious and confident freshman senator, says that there is no room for regret in her life, and that regret “is for those who lose.” Love her already, and I can’t wait to see her keep her own amongst all the male veteran politicians. 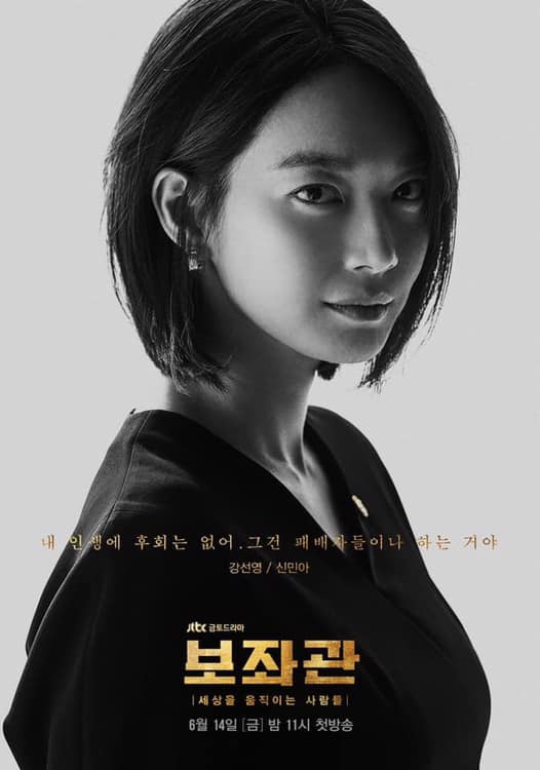 Lee Elijah, playing a secretary working for the same senator as Lee Jung-jae’s character, shows that her experience in politics has not been smooth sailing: “If you want to survive here, you must be willing to do anything.” She provides a cynical contrast to Kim Dong-joon, who has barely begun his new life in politics as an intern. He says in his endearingly naive way that “only ethical politics can change the world.” It makes me a little sad to think how he’ll likely be disabused of that notion rather early.

Then, we have the veteran senators, who show their different approaches to politics. Jung Jin-young will play the kind of politician everyone wishes to see, with no desire to attain more power but must say what’s on his mind. He has a more tempered, but still optimistic view of the world: “The world does not change quickly. But we must still move forward slowly.” Jung Jin-young provides a starker contrast to Kim Gab-soo’s character, who looks to protect his position in the government at all costs. His caption is a little unsettling, to say the least, describing his opponents as “poisonous snakes” and “if they approach, you must cut off their necks.” Yikes.

Jung Woong-in and Im Won-hee will also be playing aides to different senators in the legislature. The two aides sound like pragmatists, but in separate ways: Jung Woong-in reminds us that “politics doesn’t feed you. Real money does.” Whereas Im Won-hee takes a more humanist approach to his work, saying, “Politics, it’s accomplished by people, in the end.” I can almost see them having a comical, bickering relationship in the halls of South Korea’s parliament.

JTBC’s Aide will follow A Beautiful World in the Friday-Saturday slot and will premiere on June 14. 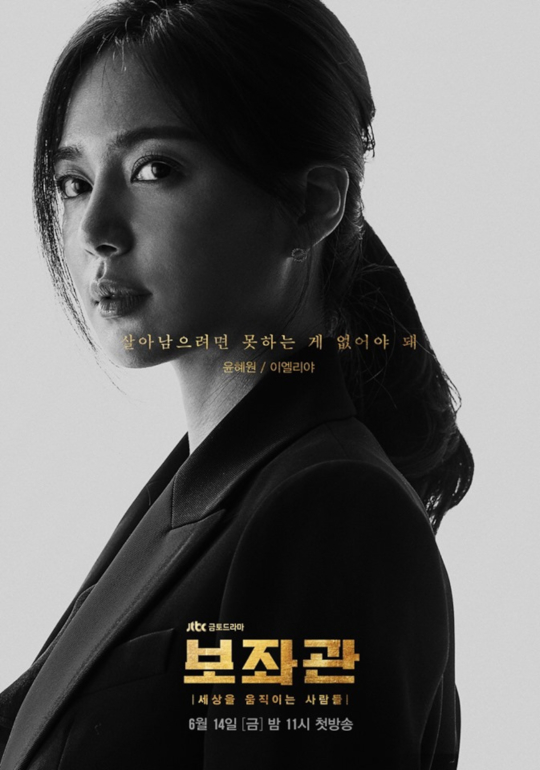 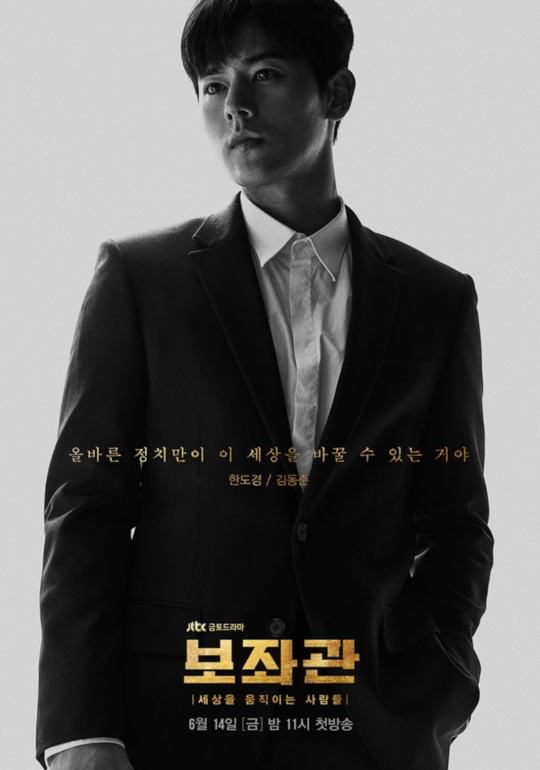 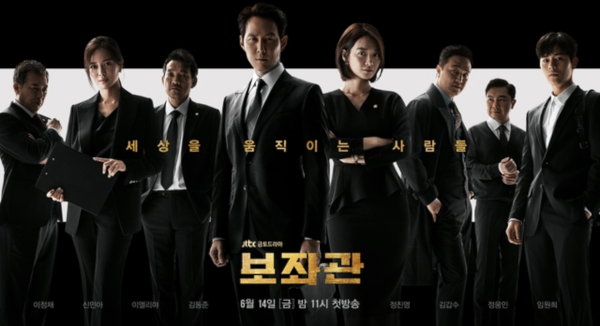 i'm really excited, but i hope it goes the exploring anti-corruptioon route lol i can't take more unethical stuff in politics we live in a society!!! take them down! and i am soooooooooooooooo glad about the women here and i really love shin min ah because the roles she has picked have made me so happy. i hope she and her mans are doing well

I've only seen Lee Jung Jae in movies so I'm really excited. Even more because of Shin Mina and Lee Elijah (will she have a promotion one day?).

Song marin for me, I've been enjoying her performance in anything I've seen so far.

Shin Min Na, that is all. Sold.

political dramas are not my fave but the cast has me sold. MIN AH is back! i hope this is a take em down and justice prevails type cause all the corruption in dramas is a downer for me. real life is hard so i need a little fun in my fantasy world.

Anything with Kim Gab-soo and Jung Jin-young is worth checking out.
I've only seen Lee Jung-jae in one drama, SANDGLASS (1995).
I'm Glad he is back in a JTBC drama with PD Kwak. I like the writer too so it's a win win all around.

I'm glad this is not competing with NOKDU FLOWER on the same time slot. That would suck for both shows and me lol.

I'm sold with the cast alone and the writer is a plus to it!

YEEEEEEEESSSSSSSSSSSS I've been waiting for this

Our maknae dongjoonie! I sure missed you a lot! Now only if your hyung could appear in a drama before enlistment 🥺

Shin Mina is magic, so here i am.

this is the first i've heard of this drama, actually, but it sounds amazing.