[Dramas and food] The discovery of side dishes

When I first started watching K-dramas, the importance of food was immediately obvious. Families would gather around a huge table filled with dishes, whole plot lines would involve parents giving their children food in boxes wrapped in cloth, and daughters would be scolded for not having fridges full of Tupperware boxes. Basically, their lives seemed to revolve around side dishes—or the lack thereof.

I thought this was just a drama thing.

I had never cooked Korean food. I’d eaten it, I liked it, and it had come with a little plate of kimchi which I loved, but I had never cooked it for myself. Actually, dramas made it look really difficult and stressful – even though my mother would point out that it’s just like a man to make a big fuss out of something women have been doing effortlessly for centuries. (Yes, I’m attributing this quote to my mother because I’m not brave enough to say anything bad about Se-hee here.) 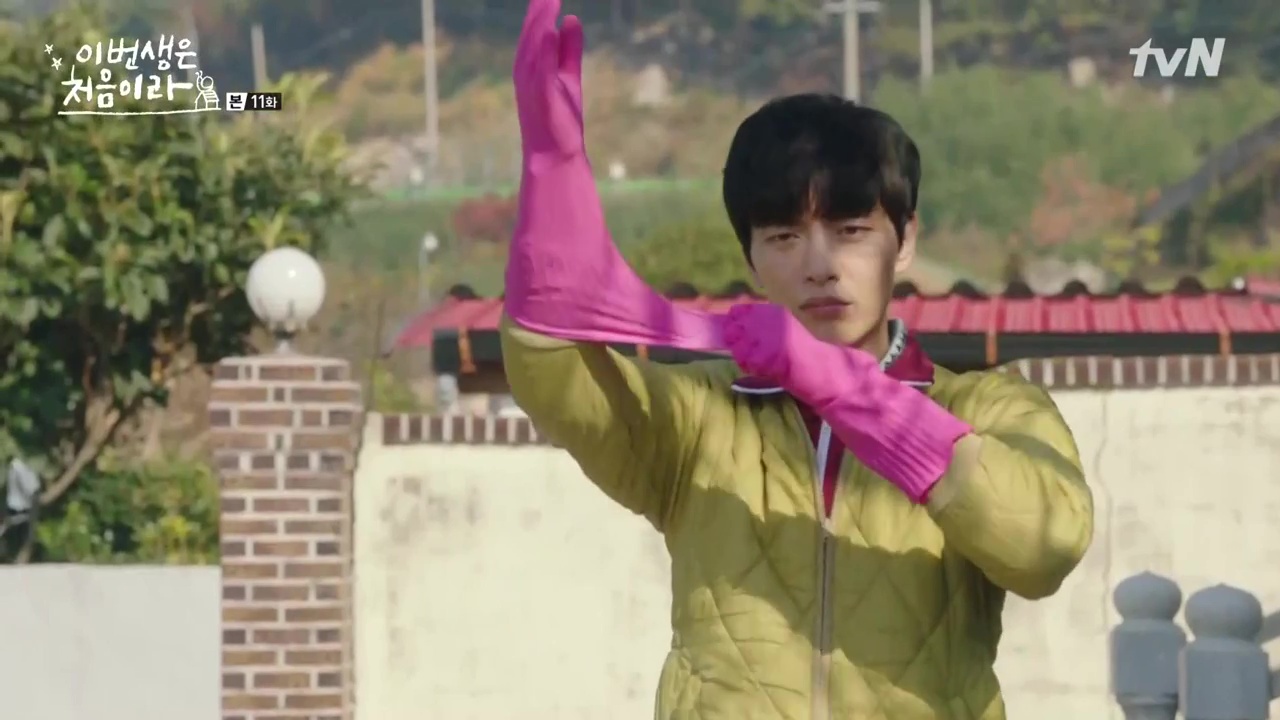 Two years into watching dramas, I decided I should really try this for myself. I like cooking. I should be brave.

I got a Korean cooking book and made the shopping list for kimchi. When you try cooking any cuisine for the first time, there are always some ingredients that you don’t have handy. In the case of kimchi, it was gochugaru (Korean for red chili flakes). Without this, I was certain it wouldn’t taste right. They didn’t have this at my nearest Asian supermarket, so a trip to a Korean supermarket was on the cards.

This kimchi making experiment was turning into a K-drama worthy effort in itself. I thought that as I was going to the Korean supermarket, I might as well try some other things than kimchi. This was the moment when the penny dropped and I discovered the true value of side dishes. The recipe book said for a number of these side dishes: if stored in an airtight container, this will keep for months.

Now, as I said, I like cooking but I don’t like cooking every day. In truth, the only thing I like doing every single day is watching dramas. Everything else you have to do daily is called a chore. These side dishes were a revolution. I spent an afternoon cooking and then I had enough food in the fridge to last me for–well maybe not months but definitely many weeks if I was willing to eat the same thing. Or, I could make a large number of them and rotate them round and then all I had to do was put some rice in the rice cooker and I was done. 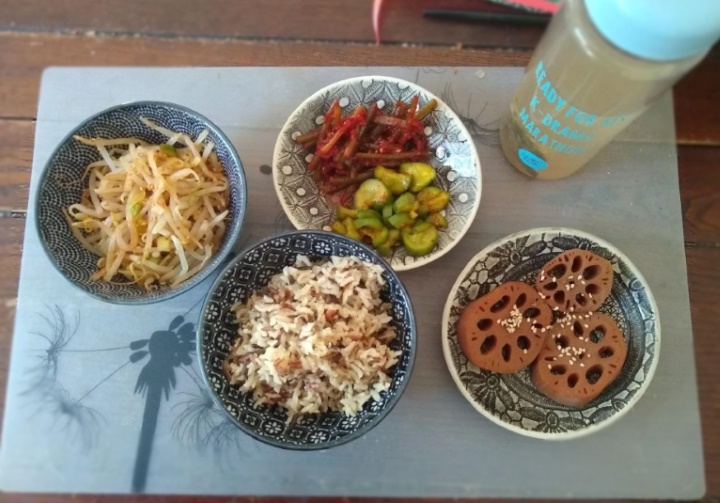 It did say that you should never put food back in the airtight container after having put it out on the table. I got that, that would definitely make it go off more quickly. All I needed to do was get some small dishes and… before I knew it my table looked as if it had been carried straight out of a K-drama.

So now this is what I do. Once every couple of months I will set aside a day to stock up on side dishes. I go to the Korean supermarket in the morning and cook in the afternoon. It isn’t stressful at all.

One of the few dramas that get right how relaxing making kimchi and other dishes can be, is the excellent Fermentation Family, where the two sisters sit and chat and make their food.

Not having a sister on hand, I usually watch an episode (or more) of some drama while I cook. I would recommend a family drama, so that it’s not crucially important if you miss something. As long as it’s not a scene of the family eating of course.

I can’t imagine having rice without a minimum of 3 side dishes. Basically I don’t look at rice the same after my drama watching experience. Great write up. That food on the table is calling out to me!

Your side dishes look delicious!! I loved that scene where se-he decided to make the kimchi.
I wish more Male protagonists in dramas actually did the housework and cooking like adjummas.

I remember I wasnt fond of rice before watching Korean dramas, now I sort of feel like I need it at every meal! 😂😂
I need to make kimchi at some point too :)

And I got my Dramabeans water bottle into the picture too :-)

Strangely enough, I have seen more males doing cooking, dishes, laundry, basically any house chore, than I have seen in any other country's shows/movies. Although they are usually younger males, not the older more traditional ones. I like that it is usually not stressed like he is doing something unusual for a man.

Yeah that's true, I have noticed it more in drama with younger males.
I would love to see a older traditional male making all the side dishes and running the home and people sharing chores equally.

Terius Behind Me if I'm not mistaken...

I "think" the father in Oh Hae Young Again too...

Yeah I loved watching terius behind me.
I need to watch oh hae young and father is strange!

That's what I loved about Father is Strange, that the father was doing all the cooking

*and for those who know me, no my taste in dramas hasn't miraculously changed overnight*

Cloggie this is amazing! I remember your earlier post on your fanwall during the drama trends month where you talked about how you'd started incorporating side dishes into all your meals (I think?) - and this is even better.

Also I did not know the side dishes can last for months - I ALWAYS looked at the fridges in dramas and wondered how they're going to eat all that. "Will they actually be wasting all this food?", I'd think, appalled at all the excess. Turns out I was the one being foolish. Clearly, I need to get in on the Korean cooking game.

That's what I used to think too! And all the parents going to their children with boxes full of food, I'd wonder: but surely that will go off. Now I know better...

In my picture, the bean sprouts wouldn't last, but the lotus root dish lasts a really long time.

Nice. Lotus roots are a bit of a common feature here as well - I'll see if I can at least make stuff like that. :D

Good article! Like you, i have started to learn how to make some simple side dishes. Seasoned bean sprouts was the first and most simple to make. But instead of putting them in airtight containers in the fridge, i pack mine in small containers (1 serving big) and then freeze them. Taking out from the freezer 1 small container each time before the meal to thaw out and since it is veges, it does not take a long time to thaw.
I will have to learn how to make other seasoned veges in the near future.
Thanks for sharing ....

I didn't know you could freeze them! Thanks for the tip!

Normally you don't add vinegar, it's fermentating naturally or it's salty.

The lotus root slices are cooked in a mixture of sesame seed oil, soy sauce and honey. No vinegar

Great post.
I still am amazed at the number of side dishes especially at breakfast. One of the things I couldn't get over is how much work it must be.

Nice Cloggie! I have been trying some Korean dishes like Kimbap etc. but never tried to make the side dishes. I always buy the kimchi.
It’s time to start googling! I should try making some side dishes. If I can keep it for a month that’s even better.

Yes! That's the great thing about it - you cook once and then it's effortless dinner for the rest of the month

8 egads aka Dame Maggie with a heart of coal

The genius of side dishes is how they transform highly perishable produce to something delicious and able to be stored for long periods.

Great post @cloggie, it’s almost as good as your post about Kdrama’s influence on your fruit eating habits. :)

Haha, I wanted to read the full version of that one. It was awesome.

But that was a full story - I don't think there was anything more to say about fruit.

Between this article and my sister sending me photos of her tteokbokki lunch today, I'm stalking Maangchi's website with heart eyes and occupied arms.... :'(

I have her cooking book 😄

I like Maangchi's as well, it's a good site.

Aw! A kimchi and side dish post! I love how how easy side dishes are to make as well. We always have a minimum of 2 at every meal. Pickled radishes are a fav. I leave the kimchi-making to my hubby though!

I am from an Indian background ( living in London ) and one of the things I love and have noticed over the last 15 years as a drama watcher is actually the similarities between how both Koreans and Indians view the importance of food.

Side dishes and rice are a staple of Indian food.

I have never actually eaten Korean food despite all my drama watching so I have been inspired - might just head to Korea restaurants in London to try it out!!

Great article @cloggie! You're an inspiration. That was a nice shot of the food you made and the DB water bottle!

My problem is laziness and that I really don't like to cook. I'm so fortunate that I have a friend who makes loads of kimchi and does not mind offloading some on me. Yes the chilli flakes makes all the difference in the taste.

Look at the screenshots, I'm feeling peckish. All the best as you continue to explore more side and even main dishes!!

Yes I love the idea of side dishes and wish somebody would cook them for me.

No, I enjoy cooking but have only attempted jjajangmyeon, kimchi pancakes and kimbap. The easy stuff, basically.

Watching kdrama has taught me that having someone to cook side dishes for you (like a mother-in-law) is probably more hassle than cooking them yourself.

🤣🤣🤣🤣
So true. Even side dishes are not a good enough reason to have a Korean mother-in-law.

@cloggie Great post! Enjoyed reading this. Loved the pic of your culinary efforts. :)