Falling in love One Spring Night in MBC’s melo romance 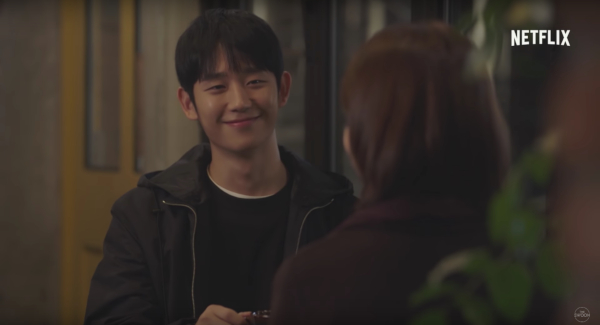 Man, who wouldn’t fall for Jung Hae-in (Pretty Noona Who Buys Me Food) if he looked at you like that? MBC’s sentimental romance drama One Spring Night, which will air concurrently on Netflix, has released another teaser featuring both leads Jung Hae-in and Han Ji-min (The Light in Your Eyes).

The clip begins with some similar shots taken from previous teasers, of both leads walking down roads lined with trees in full bloom, though Jung Hae-in looks objectively much happier doing so than Han Ji-min is. Maybe it’s because offscreen, she agrees that they can be friends. The two end up at a barbeque dinner along with an assortment of friends or colleagues and lock eyes across the table as Jung Hae-in informs her offscreen that he wondered about what kind of person she was.

He continues that he thought about whether she had someone by her side, but even then, he kept wondering. We see him running on the road while it snows, looking for someone, while Han Ji-min nervously adjusts her hair in the bathroom. The two share a coffee and exchange shy grins, as Han Ji-min replies that “she’s really glad” that they met, since he’s a “good person.” The leads walk down a lit alley and the trailer ends as Han Ji-min waits at a bus stop while he looks up from his desk at the pharmacy. Jung Hae-in says in voiceover, “I won’t ask for anything more. Just allow me to see you.”

MBC’s One Spring Night will start its run this coming Wednesday, May 22. 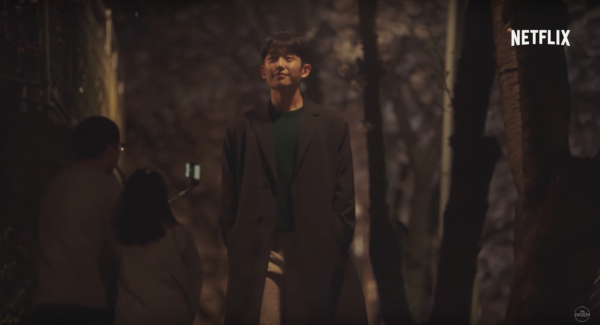 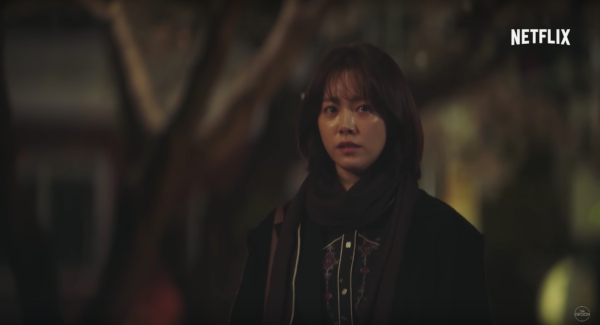 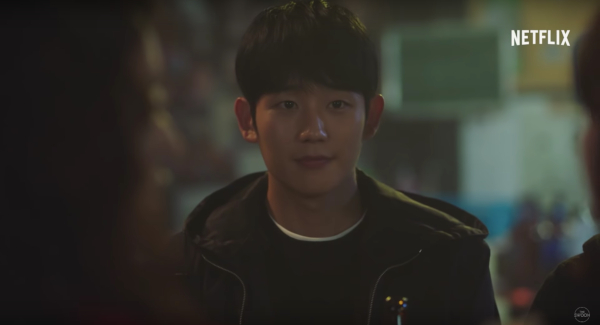 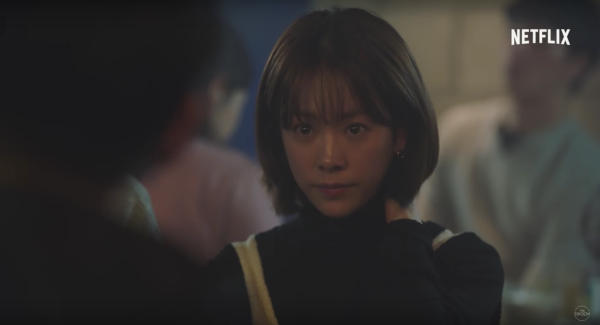 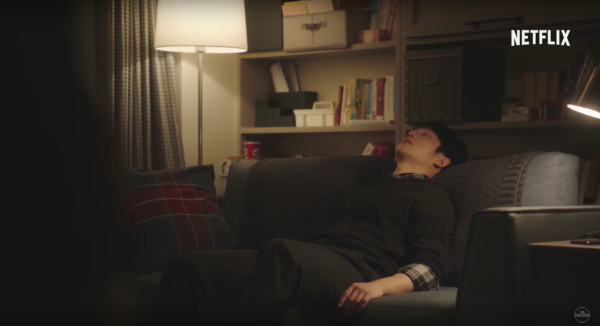 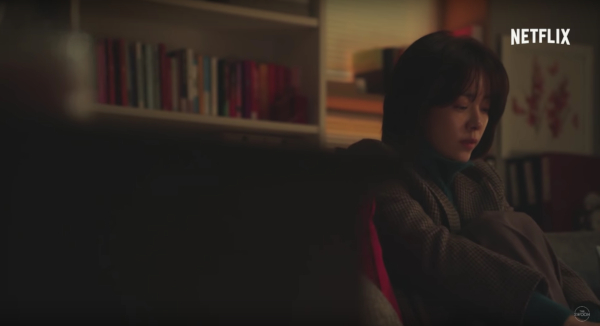 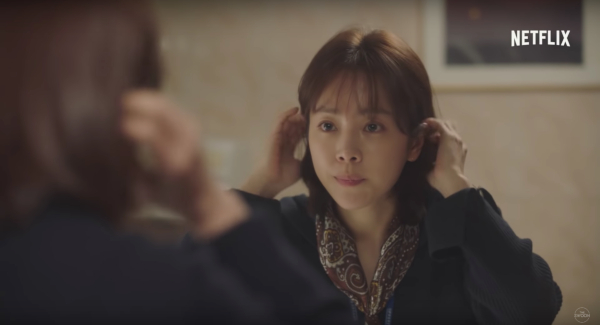 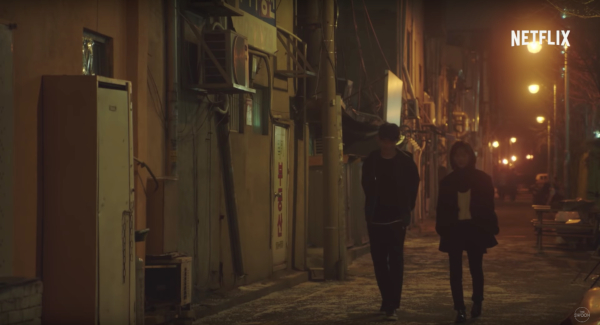 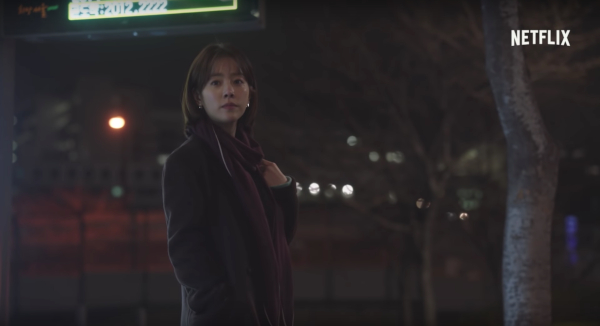 Yup, that trailer really does give off a Pretty Noona vibe. I think I'll wait for some recaps or Beanie comments before I risk my time watching.

Caution is advised. I do suggest checking it out, though, eventually. If the writer has gotten their head out of their butt, It could be good.

Got the same vibes here... and I dropped Pretty Noona. When the plot is too empty... expect needless, pointless, and dragged until death conflicts for the sake of having one.

I hope I'm wrong because I luurrrves both actors... but after that one, Jung Hae In better switch genres. It's starting to get old.

he's so adorable, of course we're going to watch it!

I am so wary of this drama. I was volcanoed by Pretty Noona, so idk about this drama. Hmmmm, yikes, we'll see.

so wary. so very very wary.

asking for real, not being snarky, but do you think whoever made this trailer meant to make it look like Pretty Noona? And did they (again, asking for real) maybe not know PN was a train wreck?

PRETTY NOONA is considered a success in ratings 7.2% for a cable romance. Reviews were mixed. I wouldn't call it a train wreck based on DB comments alone.
For me it was a love/hate relationship since I had very high expectations. I thought it would be near perfect like PD Ahn's previous dramas even with a new writer like Kim Eun. Maybe I need to cut her some slack this time around.

The trailer feels and look like PN because it's done by the same PD.

I think you'd hit the nail on the head about expectations. People thought the drama would be one thing and it was another. People thought that anything by PD Ahn would be flawless and it wasn't.
I was expecting a gorgeous, perfect OST but I still can't listen to Stand By Your Man without a PTSD response.

I found @saya analysis about the contract between the creator and the viewer in last year's end-of-year review to capture the best what people were so angry about.
http://www.dramabeans.com/2018/12/2018-year-in-review-thrill-me-heal-me/

"People thought that anything by PD Ahn would be flawless and it wasn't."

I was one of those and I still hold him in high regards. He has done so many quality dramas to be written off by PRETTY NOONA.

He is part of the reason why I love JTBC and Drama House production. IIRC he is or was one of the co-CEO of Drama House.

"What he is most proud about the Secret Love Affair:

PD Ahn Pan Seok started the interview with a wave of his hand. “I have told the story in 16 Episodes what more could I say?” When he began, he started by saying he is most proud of the fact that he was able to complete the Secret Love Affair project while giving plenty of time for the staff to eat, sleep, and rest.

He is one PD I'll always respect.

Secret Love Affair is one of the finest dramas I've ever seen. It is slow-paced and some people find it a difficult watch. But it is so brilliant and so uncompromising and almost flawless. It is one of my few 10/10 dramas.

he is most proud of the fact that he was able to complete the Secret Love Affair project while giving plenty of time for the staff to eat, sleep, and rest

Just makes me love it even more.

I actually didn't consider him flawless. Pretty Noona tanked for me because the back half was frustrating unentertaining trash. That being said Secret Love Affair is still one of my absolute favorite dramas. That was flawless.

I am still salty about the Noona back 8 eps. Still.

This is making me very cautious to even check it out.

Wow I really wanted to watch this drama but now i'm a little scared BC it looks too much like Pretty Noona Who Buys Me Food. I was burned so badly by that drama that I couldn't even finish it. Sigh~ (dilemma) what to do, what to do.

Lets just wait and see! I would really enjoy it if this is something of a redemption for the writer. But I won't get my hopes up just yet.

Jung Hae In should play against type and play a villain in his next drama.

He definitely needs a turn as a serial killer.

Every k-actor need to take turns to be a killer at least once in their career and widen the pool of k-actor killers/villains/psychos 😉.

I hate-watched something in the rain. 😡 But I loved jung hae in in prison playbook and while you were sleeping. I vote light, fluffy rom-com for him! And with someone his own age PLEASE! eg park bo young, lee sung kyung. That’s just me. ✌️ 🤷‍♀️

He would be super cute with Park Bo Young. But I've noticed that in her dramas, her male co-stars often get overshadowed and their storylines aren't as deep as hers, so I don't know if Jung would be okay taking a backseat to her.

I am conflicted about this show. When the series was first announced, I knew it would be considered Pretty Noona 2.0 in style and tone, but with a different plot (a married couple who were at a crossroads of either falling out of love or rekindling their romance.) But the trailers and pre-premiere stories infer that the two leads are basically re-creating the Pretty Noona story line.

Waiting for this one to end before I watch it! You can’t fool me twice!

I love the PD and han ji min so i will watch this. I will give the writer a second chance. Hopefully she redeems herself. I am cautious but i am still looking forward to it. I need a good melodrama, i hope this drama is the one. I enjoyed half of PNWBMF so i hope there's a chance that this drama will be better in 8 plus episodes lol. If the writer fails, then i will ban her dramas for life lol.

Pretty Noona was not loved by most beanies it would seem, but it was a gateways drama for my best friend and she swears by it. So to each their own. This might be good.

(If there is a plot of course. *strains eyes*)

I hope your friend gets to enjoy this one even more!
PrettyNoona wouldn't have been my first rec, but if she enjoyed it, that's good!

It wasn't perfect and the last bits were a disappointment for me, but Pretty Noona was decent overall. Taken as a whole I liked it.

I have no interest in this drama, I'm just here for the Pretty Noona comments.

He is so cute and I love how he looks at her. She is one of my fav actresses, so I will check it out.
Just wondering why it looks so heavy from the start lol
First stages of a relationship should be a happy time.

WIth Her Private Life and My Absolute Boyfriend, a more realistic love story is welcomed ! I loved Pretty Noona. But I'm surprised how this one looks the same when the story was different. But I like the PD, the actors, etc so I'm excited to see this drama !

background song is love! that's all i can say for now.

I'm more into dramas that have that thrill how they get to be together rather than the early beginning as a couple(that even if i like them i feel bored faster) but it looks promising and melo...