I’m pretty sure the show didn’t intend to make this newest teaser funny, but I couldn’t help giggling a little at the Very Serious faces in this teaser. Not that I think JTBC’s upcoming political drama Chief of Staff won’t be a serious show, full of ideology and a fair dose of cold pragmatism, especially given the character descriptions of this ensemble. The cast is full of some heavy hitters and I’m excited to finally see them in action.

The teaser has a super simple concept, in that it’s really a 2-3 second shot of each of our main players, intercut with the caption “Those who move the world are coming” and snippets of Lee Jung-jae (Svaha: The Sixth Finger) walking towards an out-of-focus camera. First, we have Shin Mina (Tomorrow With You), sporting her politician badge as a freshman senator. Next is Lee Elijah (An Empress’s Dignity), playing a secretary who works with Lee Jung-jae’s Chief of Staff character.

Kim Dong-joon (About Time) looks appropriately young with his backpack and naive confidence as an intern who is set on changing the world for good. An almost unheard-of morally upright politician, Jung Jin-young (Sketch), gazes back at us from behind his desk, while his political and ethical opposite Kim Gab-soo (Haechi) gives us an imperious gaze from his chair. Jung Woong-in (Ms. Ma, Nemesis) rounds out the main cast as an aide whose ultimate loyalty lies with money. The teaser ends as Lee Jung-jae gets broodingly close enough for the camera to focus on him.

JTBC’s Chief of Staff will premiere on June 14 and air on Fridays and Saturdays. 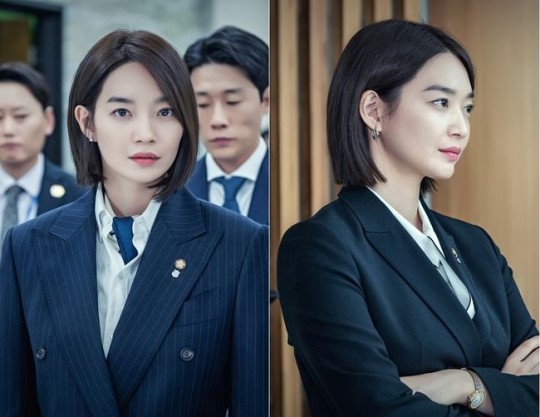 Well, I really like Shin Mina, but I don't remember ever seeing her in a "serious" drama, so this should be something new. The cast looks solid, so I will probably give it a go.

She was pretty rusty in her last drama so I don't know what to expect.
The veterans are going to be awesome!

she was serious in a heavy drama called Tomorrow With You. you might have not seen it yet.

I don't know why.. but their cold and serious faces in the teaser just make me burst out laughing...

I saw Tomorrow With You, but didn't actually think of that as serious, but I see your point. I liked Tomorrow with you, but I am a big science fiction fan.

for me it was some sort of a heavy drama since the girl waited for him to come back for how many years and their relationships failed.. it was a totally different character of Shin Minah from her rom-com which i always seen her in the drama.

What is this teaser supposed to mean? Bunch of people try to make serious face, why?
I like Shin Min-a, but after watching the teaser I'm looking forward to Designated Survivor KR more than this one. I know the plot in DS and I'm confidence it will be at least watchable.

Political drama's can be good but they can also by formulaic- someone is corrupt, someone unmasks the corruption.....

Even if it is formulaic it can still be good- if it is done well. I may give this one a look, but not with high expectations.

I’m so ready for Shin Mina and Lee Elijah!

What a great cast! I love watching most of these actors, especially crime dramas.

Shin Mina ❤️ *putting this drama on my watchlist*

i can barely think, but i am excited for this

Love the female cast of this drama. Please don't be a typical political drama. Hope it has a fresh plot and interesting characters. Not just black and white but grey characters and areas. It would be a waste of cast if this is just about good guys chasing bad guys and getting tortured throughout the drama and finally they win in the last two episodes. Those dramas are for sadists IMO.