This looks super wacky, which I’m hoping is a good thing at the end of the day. TV Chosun has a new drama on the way called Joseon Survival Guide, which has released a teaser featuring Kang Ji-hwan (Happy to Die), Song Won-seok (Switch), Kyung Su-jin (Meloholic), Park Se-wan (Dance Sports Girls), and Lee Jae-yoon (Mother). I love Kang Ji-hwan in comedy, and I hope this show gives him some good material to work with.

In Joseon Survival Guide, Kang Ji-hwan plays a former archer who used to be a member of the national team, but for some reason is now working as a delivery man. His character finds himself flown into the Joseon period, where he encounters Song Won-seok’s character, who is treated like he’s less than human in his era. Together, they will achieve “miracles” in the action comedy, though it’s not clear what that means precisely.

While Kang Ji-hwan is the one to time-travel into the past in the show, in the teaser, he’s the one dressed in Joseon garb while Song Won-seok looks sleek in a suit and sunglasses. Their posse confronts a group of armed soldiers in the lobby of a modern office building and start fighting, not knowing that they’re being watched by Lee Jae-yoon through multiple cameras. He strikes a menacing pose, though it would be more intimidating if he weren’t sipping what looks like a glass of orange juice.

Kyung Su-jin and Park Se-wan, both sporting hanbok, sit behind him. From her outfit, it looks like Kyung Su-jin will be playing a nurse in Joseon, and she asks Lee Jae-yoon in exasperation how long they have to keep watching “this show.” Lee Jae-yoon responds that it’ll be over soon, though it might not be in his favor, seeing as how Kang Ji-hwan’s made it all the way up the elevator.

Joseon Survival Guide is directed by PD Jang Yong-woo, whose credits include JTBC’s D-Day. Writing is Kim Sol-ji, who also wrote JTBC’s Syndrome and MBC’s Heading to the Ground. These credits don’t exactly inspire a whole lot of confidence, but maybe they’ll surprise us here. I sincerely hope so, because time-travel lends itself so well to comedy. 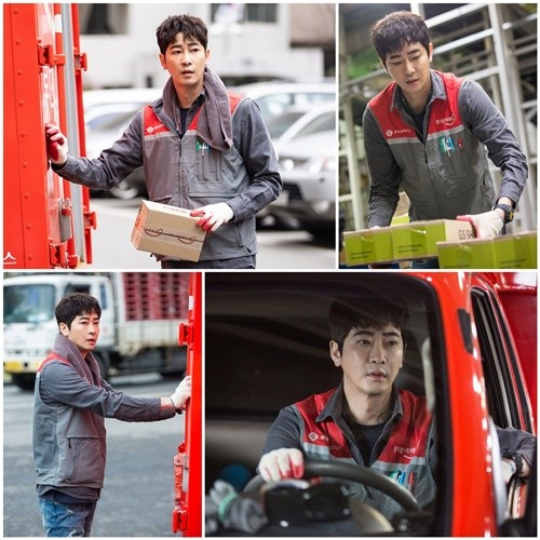 First reaction: What in the world did I just watch? The flimsy bows and arrows look ridiculous 🤣
Second thought: I like wacky time travel so I may try this.

It looked like a pitched battle was being fought in a skyscraper atrium during the Strife of Chaebols. If you look carefully, you'll see Dr. Na Yi-je (Namgoong Min) standing by with a tranquilizer gun and butterfly net. ;-)

"Strife of the Chaebols" ROFL

i HOPE against all hope, that THIS will finally be the very good drama for Kang Ji Hwan after all these past... less than good dramas...

i have really liked him in all these years, but lately it has seemed that he hasn't chosen (or been offered?) good dramas...

i want to see him in a good starring role!! please let this one be it, tho it's hard to tell from the preview... which is, pretty whacky! and i hope that's a good thing!

Children of the lesser god was an amazing show though.

Children is one drama I have never been able to find anywhere and really want to watch it. Though he usually plays a wacky character, as you said, lately it's been badly written dramas.

He was amazing in Feel Good to Die. That role allowed him to show his versatility as an actor. And as the comment above mine states, Children of a Lesser God was a wonderful show and another great performance from Kang Ji Hwan. This one though I'm a little iffy on but I'll definitely be watching. Hopefully it at least turns out to be an entertaining ride.

Yaaay! Kyung Su-jin and Park Se-wan getting casted in a (hopefully) good drama with a veteran actor! 😍😍 In Hanboks, no less!
And is that Doctor hyung from Weightlifting fairy?🤩

I'm excited to see the girls too! Fingers crossed for it to be good.

Yes it is Doctor hyung.

I like the cast. This is either going to be The Good Manager (Kim) level funny or it is going to be a complete flop. I have my fingers crossed because I could use another funny show.

Thanks for the heads-up on JOSEON SURVIVAL GUIDE, @tipsymocha. This looks bonkers. Sageuk with a side of ridiculous. I like it.

Lol could this be another DR Jin?

Somehow I'm picturing a book actually called "Joseon Survival Guide". Maybe it contains information on how to avoid Cliff of Non-Doom, Cart of Doom, Tea of Doom, Arrow of Non-Doom, Slash of Doom, Jurchen of Doom, Palace Spy of Doom, Hairpin of Doom, etc. etc. and so forth.

You might be right, @kiara. So will our hero have to fall off the Hospital Roof of Non-Doom? Is a gummi brain fetus involved? Do viewers have to play with their own Rubik's Cubes while watching the show?

Speaking of Time Travel that isn't: I'm about half-way through DELIGHTFUL GIRL CHUNHYANG (2005), and love the whack-o Joseon vignettes of Mong-ryong's and Chunhyang's past lives at the end of every episode. Danged if a young Lady Hae from MOON LOVERS: SCARRED HEART RYEO isn't the obnoxiously intrusive female second lead. Except for the many times I want to strangle Mong-ryong's mother and scheming noona, Hong Chae-rin, I'm having a blast watching this show. Great OST.

I didn't know I needed Lee Jae-yoon as a comedic villain until this teaser. XD

theory; what if he only THINKS he is in actual Joseon but really it is a set for hidden reality show. can this be plausible?

I am getting ideas again. at the same time there could be shows in Joseon time imagining the future ( very accurately) and actor transported to modern time will think it is just a bigger scale stage?

@redfox,
Ah, a touch of Lewis Carroll's Through the Looking Glass -- mashed up with THE MATRIX. With a shovelful of QUANTUM LEAP. ;-)

@pakalanapikake No, @redfox idea seems more along the lines of The Truman Show. But I like it.

This actually looks quite good...Liked it from the first bits i saw weeks back and i'm so gonna watch it! I know for sure i'm goona laugh a lot!

I love time slip shows and will catch at least the first couple episodes. Plus Kang Ji-hwan looks a bit like my brother—I want to squishhhh his cheeks.

If that's truly the case, please squishhh his little cheeks for all of us!

I wonder if it will get subs though. T___T

Highly unlikely. Maybe we should write Netflix and have them pick it up.
https://help.netflix.com/en/titlerequest

Will surely watch it. Kang Ji hwan is one of my fave actor and watched all his dramas and movies.