New stills have been released showing the cast of Let Me Hear Your Song gathering together for the first script reading.

At the center of the drama’s story is an unsolved murder. Although there was a witness at the murder scene–Kim Se-jung (School 2017), the resulting trauma caused her to lose all memory of that particular day and develop chronic insomnia. One day, she meets Yeon Woo-jin (Priest). He’s a peculiar and tone-deaf, but they discover his singing is a great sleep aide for her. Somehow, his off-key singing enables her to sleep, but also triggers something inside of her that starts to bring buried memories to the surface. Will they be able to solve the murder? Will Song Jae-rim (Clean With Passion For Now) ever get to play the leading man?

Our main cast are all connected as they belong to the same orchestra. In the leading roles, Yeon Woo-jin will be playing a tone-deaf pianist named Jang Yoon with Kim Se-jung taking on the role of a timpanist named Hong Yi-young. Song Jae-rim will be playing the second male lead, orchestra conductor Nam Joo-wan. Ji-yeon (Triangle), formerly of the girl group T-ara, will play the part of a talented but haughty violinist named Ha Eun-joo.

In the writer’s seat for KBS’ upcoming drama is Kim Min-joo and directing will be done by PD Lee Jung-mi (Cantabile Tomorrow).

Mystery rom-com Let Me Hear Your Song is currently being planned to premiere in July and will be airing Mondays and Tuesdays on KBS. 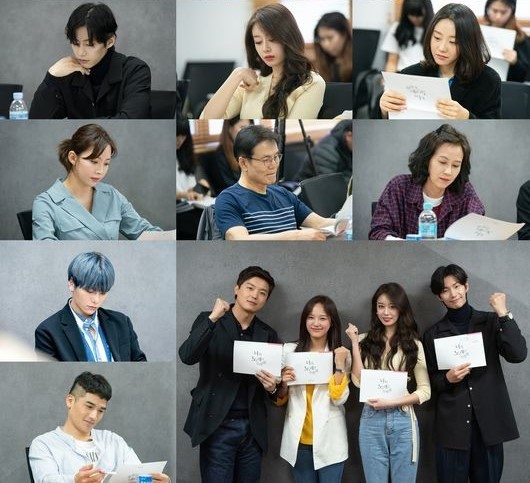 I mean technically SJR did get a lead role... In We Got Married XDD

Will Song Jae-rim (Clean With Passion For Now) ever get to play the leading man?

Song Jae-Rim and Kim Jae-wook should be friends.

Kim jae wook is absolutely smashing it in his first lead romcom (Her Private Life). Hope we get a superb one for SJR too

Will Song Jae-rim ever get to play the leading man?

Will Jiyeon ever get to play the leading woman? Jiyeon is a natural actress.

When Song Jae-rim finally gets to play the leading man, I hope he is paired with an actress closer to his age. These four leads have such a big age gap.

I feel like my discussions about musician stereotypes are resurfacing here. Help me out @kimbapnoona
- "tone deaf pianist" - pianists don't need to tune their instrument is the number 1 reason violinists give me for "why it's harder to play the violin". So it's ok to be tone-deaf. *rolls eyes*
- "insomniac tympanist" - maybe she is still counting the silent beats in her sleep.
- "haughty violinist" - duh, they could have also made her a cellist.
- "orchestra conductor" - expect anything.

It probably turns out that he isn't tone deaf at all, just has a horrible singing voice and I think it would be really hard to get to sleep with the rhythm of the timpani still going on in your head.

So I'm hoping for something that's less ridiculous than the description makes it sound.

They should make the orchestra conductor a nice and supportive person. Nobody would expect that!

that thing about tuning violins. that has nothing to do with tone-death. it should be having perfect pitch, or at least absolute pitch, when you do tuning.
pianists need to know if the piano is out of tune and get a professional tuner to save the piano! it sounds darn awkward to have even just a key slightly off pitch.

The premise sounds ridiculous but I'm really interested.
I hope they really show what it would be like in an orchestra. Such an interesting job.

Honestly I hope so. That's the only way I won't be bitter about him not getting the girl AGAIN.

Someone said that the second leads gonna have their own romance. so he gonna get the girl this time ;)

How do you know?

and so. is the murderer singing in perfect pitch that's why the female lead can only sleep to tone-deaf singing?

Aww... then that means Song Jae-rim isn't the killer because that man can't sing properly. Haha