I feel like Shin Sung-rok (An Empress’s Dignity) has some of the best facial expressions in the industry, and I’m excited to see him put them to good use in his newest drama. There’s a new teaser out for KBS’s fantasy rom-com Perfume, which focuses on Shin Sung-rok’s genius fashion designer character in all his vainglorious glory.

The clip starts with Shin Sung-rok informing us that fashion is “art” and a “superior method of expressing oneself.” Intercut are shots of him at work putting on finishing touches to his creations. He walks among a seated crowd and introduces himself as a “genius designer” who “leads the industry,” grandly promising us a new art form. I admit I cracked up a little at his introduction, because who introduces himself as a genius? And yet, it rolls of his tongue so naturally, lol.

Unfortunately for the self-proclaimed pioneer of the fashion industry, his over-the-top announcement is all in his head, as we see him striking a pose in his nightgown. He’s caught in the act by Go Won-hee (Your House Helper), who is sporting a rather hideous perm. She must be working for him as a housekeeper, because she snaps at him to hurry up since his breakfast is waiting for him. Oh, is this how Go Won-hee’s ajumma-turned-rookie model character gets off the streets?

The show has also released several stills of Cha Ye-ryun (Dazzling Temptation), who will be playing a former top model who has since moved on to be a highly competent director of the modelling agency she founded in partnership with Shin Sung-rok’s character. She may look perfect on the outside, but of course, she harbors pain from a past love still. I’ve never been a huge fan of Cha Ye-ryun, but I’m hoping that she’ll maybe provide a neutral influence on the over-the-top leads.

KBS’s Perfume will premiere on June 3. 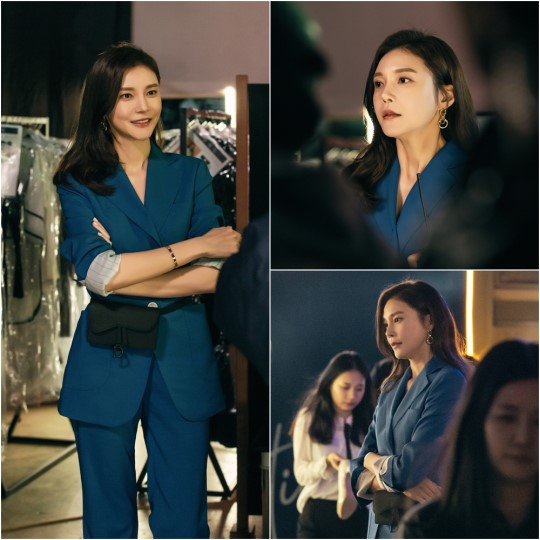 Looks quite funny! I won’t miss it!

I've never been this excited for a drama comeback by any actor 😂. And its only a few months after TLE ended haha.

Hoping it will be as funny as the teaser. I'm all in for comedy. I actually like him in comedy (3Dads1Mum, Trot Lovers), though I do think he is styled better when he is a villain 😅.

I'm so excitedddddd!!!! I miss his voice so much. I didn't realise how much until he spoke. It looks so goofy and hilarious I can't wait. He's going to steal the show again!!!! Oh wait, it doesn't matter, coz this time he's the lead!!!

I'm so ready for this. I've been watching and rewatching clips from Last Empress for days.

so happy we get more of SSR SO SOON! i loved TLE and gained an even greater love for his impeccable acting so i will be patient but it is so far away!

You know what, I get it, I really do. Simple girls in kdramas but does Go Won Hee have to have that ridiculous hair???

Did she not own any mirror, Are her relatives or friends blind? Is she blind? are hair salons extinct during this era? I just cant XD

That Hair...*shudders*
This could possibly be the ugliest hair I've seen in korean drama. It's like rats' tails, plucked, dried in the sun, glued together, and microwaved for an hour on high.

Finally! A Shin Sung-rok role that doesn't make me root for a despicable character or be subconsciously terrified of a perfectly normal person.

Are we sure he is perfectly normal @mary? Having 50+ phobias and 30+ allergies doesn't sound all that normal to me 😅.

According to kdrama statistics...yes..this might be his first main lead role in a drama. After around +/- 17 years in kdramaland, the time has come for him to be main lead in a drama~ ahaha 🎊

Do we know if it will be on Viki? I have the Standard Pass and I don't see it in the "Coming Soon" section.