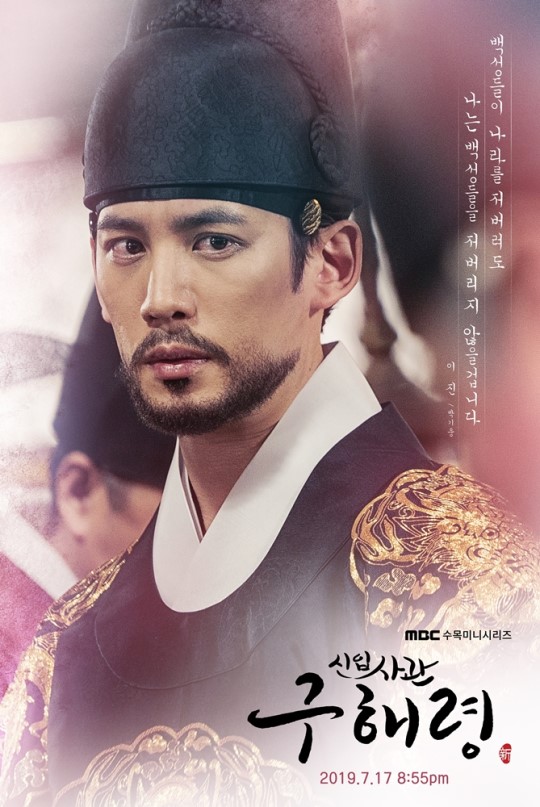 With a cast like this, you can be sure that we’re going to be in for a lot of pretty in this show. MBC’s sageuk romance Rookie Historian Gu Hae-ryung has released posters of its leads, Shin Se-kyung (Black Knight) and Cha Eun-woo (My ID is Gangnam Beauty), plus Park Ki-woong (Return) who FINALLY makes an appearance in the promos.

The fusion sageuk follows the unlikely tale of Gu Hae-ryung (Shin Se-kyung), whose unusually progressive upbringing abroad and assertive temperament leads her to take the civil exam and becomes the first female royal historian in Joseon. How much do I love that she’s entering the palace not as a cross-dresser nor as the traditional maidservant/nurse/shaman role, but as a female official in her own right? In any case, at the palace, she will encounter both Prince Rim (Cha Eun-woo), who moonlights as a romance novelist, and the just Crown Prince Jin (Park Ki-woong).

I’m not entirely sure if the three of these characters end up in some love triangle, but it doesn’t seem like it judging by these posters. It almost feels like Park Ki-woong is in a different drama entirely, actually, with Shin Se-kyung and Cha Eun-woo in a sageuk youth drama and the Crown Prince in a political sageuk. Shin Se-kyung’s poster says, “I come before you as a royal historian, Your Majesty,” while Cha Eun-woo’s caption reads, “I… have no intention of letting you go.” Meanwhile, Park Ki-woong’s Crown Prince makes a promise that, “Even if the people turn their backs on this kingdom, I shall not turn my back on the people.” I really hope he doesn’t end up in a one-sided love for Shin Se-kyung’s character, because this show is just setting me up for a severe case of Second Lead Syndrome, which I don’t appreciate at all!

Rookie Historian Gu Hae-ryung will premiere on July 17 and air on Wednesdays and Thursdays. 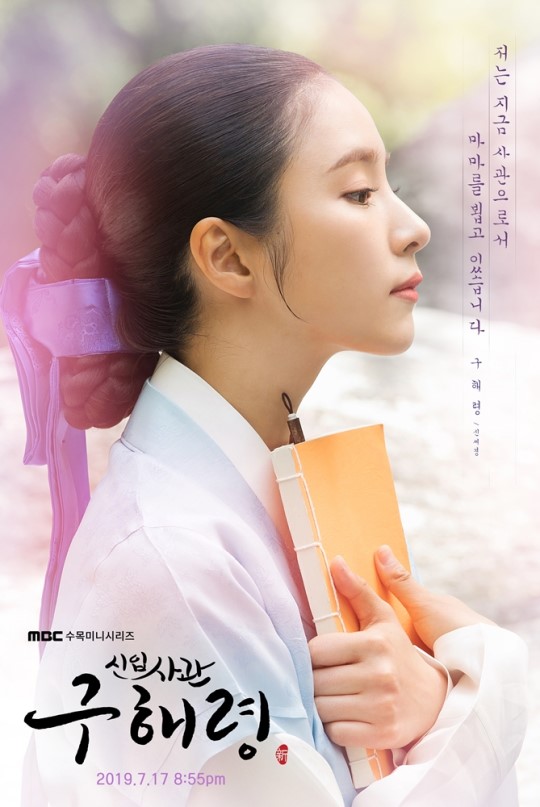 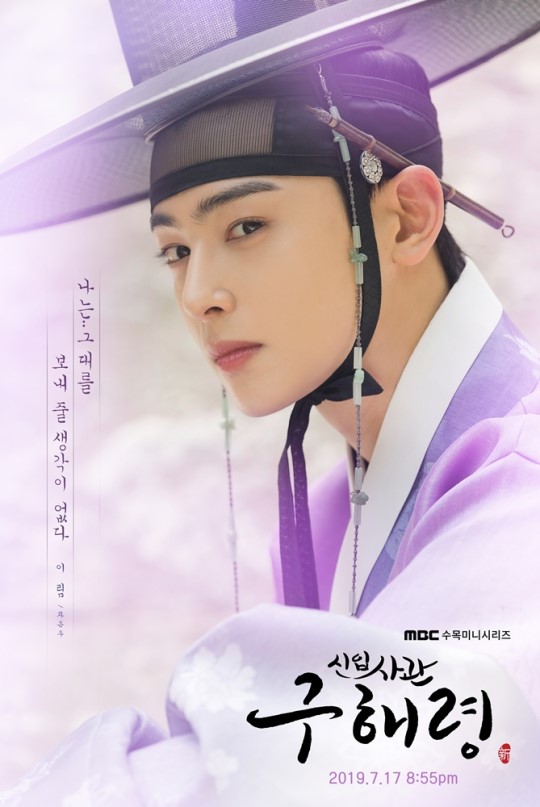 I just hope Park Ki-woong will stay good from beginning to end. If SSK can somehow be good, so can he.

I'm not usually so into fluffy-looking dramas, but this one intrigues me. The 40s teaser gave a comedic, light-hearted vibe, so I'm curious to see how the writer balances it with the serious themes, given her previous work was solomon's perjury.

I’m here for Park Ki Woong. The beard looks good on him. 😍

Seriously. As soon as I saw the character poster, I was like, "Where have YOU been all my life?"

Can somebody please give Park Ki Woong a leading role?

Oh my god, these two will be eaten by Park Ki-wong's acting. I don't know if I should feel sorry or laugh.

I know right! It's not like I don't like CEW (I watched all episodes of My ID is Gangnam Beauty tho), but all he got for acting is only his pretty face.

Park Ki Woong's acting ability will be overshadowing SSK and CEW's, he is too good to be the second lead tbh. Especially after that amazing performance as a Shunji in Bridal Mask

He wasn't bad in Chuno either; that's where he caught my eye...

I believe the description for Park Ji Hyun's character said she falls in love with the Crown Prince, so he might have his own romance. I prefer that to the funhouse mirror of unrequited love that some dramas like to do. No one needs a love triangle or, worse, square!

I hope his romance doesn't end in tragedy though. I mean if she is a commoner or a noble lady from a family with no standing, she can't be his primary consort (if he is not yet married but unlikely so considering his beard). He wouldn't want to take her as his concubine because she would certainly be eliminated by the scheming of the Court and the other wives. Gack I just want Park Kiwoong's character to finally walk on the flower path!

I'm hoping so because on second thoughts, I think this is happening under the reign of a fictional king like "100 Days My Prince".

Park Ki Woong is a fantastic actor and it's sad that the untalented Cha Eun-woo got the main role over him. Their disparities will be pretty obvious with them acting together, unless CEW can really step up to the plate (which I'm hoping he can).

I didn't even realize that was PKW with the beard! Looks really good on him though.

If the role is written right, or the main couple is good together, I don't think that will be a problem. I had the same doubts with L leading over Lee Dong Gun in Angel's Last Mission, but it's going over well with viewers (although its also that LDG's character is unfortunately written too poorly that there's no catching up).

Hmm. Myungsoo can hold his place though, as he did in Miss Hammurabi. I can't say the same for CEW. We'll have to see. I hope he'll do well ^^

Myungsoo's been acting in dramas for 8 years (and his first drama was a lead role!) and it took him at least half that to do really well.
Meanwhile, Eunwoo's first lead role was last year, so I'm sure he'll improve as well.

Yeah of course. Don't we all. Hehe even Suzy is really good now. He just needs time and experience.

The lead role isn't always the juiciest one anyway. I'm sure Eunwoo wants to learn from more experienced actors like Kiwoong, so I hope they have lots of scenes together.

Exactly. Sometimes supporting characters are written to add more substance in the plot, and nowadays casting directors put a lot of attention in the casting process of secondary actors and supporting actors, and they try to get new talent or industry seniors who are getting more recognized. If a drama is more headed by a youthful cast, veteran actors are there to balance the acting.

Cha Eun woo is too beautiful. He can cross dress in Joseon as a girl and I'd be fooled. Lol

Hi Everyone,
I am a University student doing currently my dissertation on how Korean tv drama influences potential tourists to visit Korea. I would be glad, if you could complete my questionnaire. It takes around 5 minutes to complete. Thank you and I appreciate it in advance. Please share it with other drama fans 😊
https://uclan.eu.qualtrics.com/jfe/form/SV_ahCGa6yzYRyDtYh

Interesting survey! (It's University of Central Lancashire. My university uses Qualtrics too so I figured this was legit.) I referred to @michh's excellent https://koreandramaland.com blog for drama specific locations.

Have you posted this questionnaire in the Open Thread early on Saturday morning (PDT)?

i love park ki woong and really want to see him in the leading protagonist who gets the girl role. i feel like he's such a great villain that he keeps getting typecast---seemingly nice guy who already is or will become the villain.

After I read your comment I realized, "you're right! He has been a villain in most of the dramas I watched." But I LOVE HIM. Too often a really evil character will color my view of an actor. And let's face it, in Bridal Mask AND Chuno, he was e.v.i.l. But I still love him. (Maybe because of his dancing commercial? Or his interviews with Joo Won after the show was over, where they had such good chemistry with each other.) I don't know.

Park Kiwoong said that the general public doesn't really know his name and recognize him more as the villain that's why he keeps on portraying antagonists and he said they're more challenging.
I think his agency needs to find leading roles that are well-written.

but, yah, can his agency do a better job? :D

No love triangles, please dramagods; not so much because I might get second-lead syndrome (which I totally would with Park Ki-woong), but because it always ruins my enjoyment of the lead couple getting together when someone else is suffering on the sidelines. I hate it with a passion.

Same. I think I'm developing an allergy to melodrama geometry.

It's come to a point where I find it *refreshing* when there are no triangles and I can concentrate on the lead couple without feeling sorry for someone else. I hope triangles will go out of fashion soon, sigh.

Ok. All cautions aside, Shin Se-kyung looks CLASSIC there. Like this is the next grand feminist sageuk, she's the calm, collected, wise goddess, serenely looking ahead. I DIG.
.
Alright. Back to making my list. We now have a 1st female Korean
Doctor
Potter
Queen Regent
Empress Regent
Painter
Dress maker
Musician
(Wow there should be more why can't I remember..)
Historian

I guess the boys of RETURN are getting out on parole.
Seriously, I did not recognize Park Ki-woong in the first image.

Oof Park Kiwoong's Crown Prince looks like he has the whole world on his shoulders. I hope his arc doesn't end in tragedy.

"It almost feels like Park Ki-woong is in a different drama entirely, actually, with Shin Se-kyung and Cha Eun-woo in a sageuk youth drama and the Crown Prince in a political sageuk."

Park Ki-woong! have been waiting for him since forever!