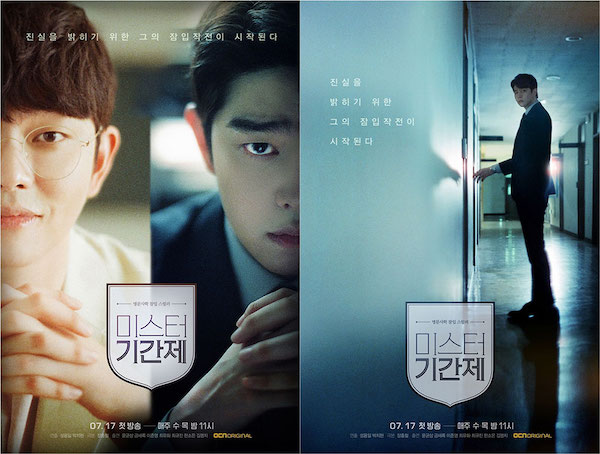 Mystery-thriller drama Class of Lies (previously known as Mr. Ki Kan-je) has just released two promo posters, featuring Yoon Kyun-sang (Clean With Passion for Now). He stars in the new series as a materialistic lawyer whose entire life is upended when he becomes involved in a prestigious school murder case. In order to regain his successful status, he pretends to be a temporary lecturer and infiltrates the elite school that only the top 0.1% can attend.

Both posters have the same copy, “The infiltration operation to reveal the truth begins.” The one on the left shows two completely different Yoon Kyun-sangs: one warm and innocent, and the other sharp and concerned. The other poster shows him in a darkened school hallway opening a door of secrets.

After first discovering him in Pinocchio as an antagonist (I rooted for over the actual hero), I’ve wanted Yoon Kyun-sang to take on grittier roles because I think he has the ability to pull off being a morally ambiguous character that still manages to be likeable and sympathetic. So I’m glad to see that he’s tackling a project with OCN, a cable channel that is almost synonymous with quality gritty dramas.

Wednesday-Thursday OCN series Class of Lies will begin on July 17, after Rescue Me 2 finishes its run.

I really like the poster ! 😆❤ It shows Yoon Kyun Sang's duality at its finest. I'm ready to comeback to k-dramaland 😄

OCN has interesting dramas to come.

Girl in that case, have you ever watched him in Rebel? He's simply awestrucking in that one, like ugh!! It's a way more serious role and his acting is just soooooooooooo so so good!

I loved Rebel. I waited for the weekly episodes. Loved the acting of the heroes and the villains. Wanted the time to pass by quickly so I could see what would happen next and HATED it when it was over--because it was over.

Yes!!! Rebel was absolutely amazing, and Yoon Kyun-sang as the hero played his conflicting loyalties and values perfectly. Ever since I've been a die-hard fan of anything Kyun-sang.

Rebel was my favourite! Even my husband (who isn't a kdrama enthusiast) followed it's airing religiously week by week LOL. Until today he still likes to imitate Amogae's "Gildong aah" and Gildong's "Oiyy! Lee Young!" LOL

I could hear their voice as I read the words 😳

I want to watch this on Rabbit with you

That sounds awesome. But you'll have to wait till September because my trip starts 25 July and I won't have a lot of time for drama watching in August.

Of course with LS leaving you hanging on so many shows waiting is something you're probably used to.

OUCH that hurt because it’s true.

And okay I humbly invite you to join me in watching Everyone’s Lies when it airs, although that will probably be happening as soon as subs are available so hopefully it won’t be at 3am your time.

There’s an awful lot of lying going on lately.

I'm excited for this drama because they are using my son's school TCIS) as the main location. It's the same school they used for Heirs and a small part of Sassy Go Go.

Wow~ really.. 😮 Have your son ever met one of the casts coincidentally? That would be cool 😊

No, he is not into Korean dramas at all. I, on the other hand had Lee Min Ho sign my birthday card and had lunch with him and Kim Woo Bin while they filmed Heirs. I also had a chance to watch them goof off on the basketball court while waiting to film. I also sat beside Park Shin Hye when she was waiting to film a scene. I plan to help with "security" for this drama.

Waiting for this! Yoon Kyunsang.. And of course Lee Jun Young.

He's baaackkk! Oh yes! I've never watched anything on OCN but will do for this one for sure. The theme doesn't sound nouveau but I hope it will develop into interesting story. I'm rooting for YKS to broaden his acting spectrum. You go boy!

I'm totally up for this!

He doesn't look a day older from when he started.