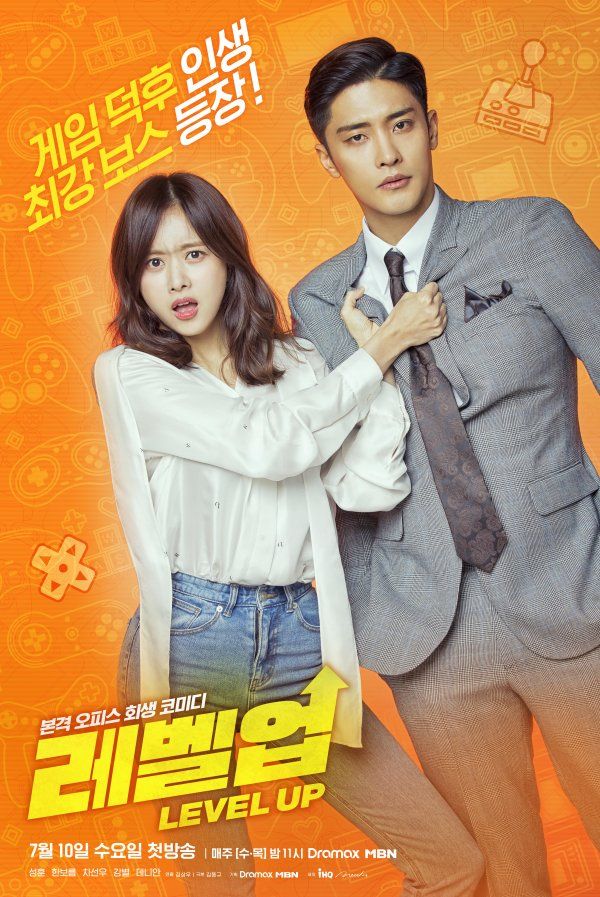 New promo stills and a poster have been released for the latest office rom-com drama on the horizon—Level Up, featuring Sung Hoon (Can You Hear Me 2) and Han Bo-reum (Memories of the Alhambra). It’s a drama centering around the story of a failing gaming company. Sung Hoon’s character is a cold, logical restructuring expert who comes to help save the company from bankruptcy, and Han Bo-reum’s character is a passionate gaming fanatic who works with Sung Hoon to create one last game that may save the company.

The poster above shows Han Bo-reum grabbing Sung Hoon’s lapels aggressively, almost as if fighting with him. The copy reads: “The strongest boss appears for a gaming otaku.” The new stills released show a competition unfolding between Sung Hoon and Han Bo-reum, with both of them having intense looks of concentration and holding gaming controllers, as their co-workers cheer them on in the background.

It looks like Level Up is being set up as a classic opposites-attract rom-com, and that might be a welcome fluffy addition to this summer’s lineup of dramas. Some members of the supporting cast include Danny Ahn (Big Issue), Kang Byul (Always Spring), and Baro (Bad Detective); Danny Ahn and Baro can be seen in the still below.

MBN’s upcoming Wednesday-Thursday drama Level Up, directed by Kim Sang-woo and written by Kim Dong-kyu, will begin airing on July 10. 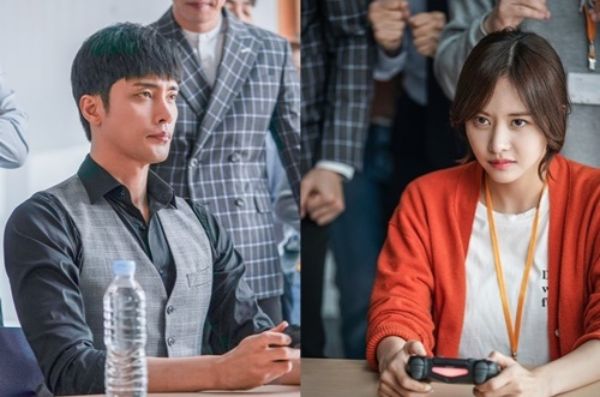 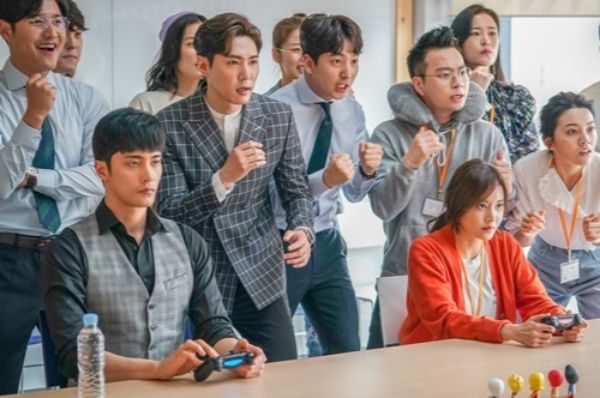 Cold, logical = role that doesn't demand too much from a handsome guy who's not much of an actor.

That is almost his entire resume.

I still question has he keeps getting work as a lead.

He is hilarious on varieties and very personable, with how small Korean industry is, I suspect it's enough to be well liked by peers and people in power to get jobs regardless of actual acting abilities.

I've liked him ever since Oh My Venus. It was the same kind of role -- tough, silent -- and it worked for him there. He seems like a guy that you want to root and I guess that's why I keep being willing to try his dramas even though I kick myself while I'm watching just one more episode of a not-very-well-written, not-very-well-acted, I-should-really-drop-this drama.

I liked him in Five Children, too. And I too am well versed in kicking one’s self...

Hahahaha I just laughed out loud so hard. So true.

Accurate, all his dramas are fun nonsense/trash. @larelle79, he gets the lead roles, but they are in small productions. He will never be lead in a super expensive production. 😂 😂😂

I don't think he has tremendous range but I think he does well when given the right script that plays to his strengths. Noble, My Love and Five Kids both demonstrated that. I think an issue is that he tends to get leads in smaller budget productions without that good of a script. In real life he is apparently a complete slacker nerdball gamer. Like, he'd be happy wearing sweatpants all weekend and just sitting around playing the latest game.

I would like to see him get a complete goofball role (maybe a slacker chaebol gamer?) with a ramrod straight back female lead who has to clean him up and make him presentable for his family's big celebration (like a 30 year anniversary of the XYZ Group, etc). I could totally see Han Ye-Seul or Baek Jin-Hee as the lead.

I have to stop here or I'll start writing scripts.

He was excellent in Five Children.

I forgot all about this! 😂

So she is the gamer and programer? That's cool. Though I know nothing about the gaming world.

I quite like Sung Hoon. He may be a bit of a green actor and does not know how to kiss (yikes!) but I like him on screen. He is easy on the eyes...

Thanks @tineybeanie
A question on the title for this article: "Han Bo-reum tries to pwn boss Sung Hoon in Level Up" - should the word be 'own'?

When I see Sung Joon's name, I know roughly what I'll be in for if I watch, and that's fine too. :-)

No, pwn is internet slang.

Ah thanks!
Wikipedia:"Pwn is a leetspeak slang term derived from the verb own, meaning to appropriate or to conquer to gain ownership. The term implies domination or humiliation of a rival, used primarily in the Internet-based video game culture to taunt an opponent who has just been soundly defeated (e.g., "You just got pwned!")."

he does stoic well. surely there is a place in all the dramas for that. i like him in spite of his lack of acting skills. this sounds fun and breezy and sometimes it is perfect for opting out of reality and into it for an hour

Sung Hoon is fine but he certainly has been typecast as the cold and stoic attractive man. He needs to branch out more or he will never improve as an actor.

I'm not a fan of the stoic and cold heroes but I am a huge gamer myself (and yay for them also playing on the PS4!) so I will probably watch it for that alone.

Lots of people seem to be hung up on Sung Hoon's supposedly limited acting skills- but has no one noticed that there has never been a show where he was a drag on the rest of the cast or failed to pull his weight?

I remember first seeing him in "Oh, My Venus"- where his acting showed a lot of depth. In "Five Children" he was half of the 'Golfer Couple' (along with Shin Hye-sun) and many people fast forwarded through much of the rest of the show just to watch their scenes. In the wonderful short episode drama "Noble, My Love" his co-star was a singer with little acting experience- she did well but it was Sung Hoon's acting that made it work so beautifully.

I think that the reason most people think that his acting is limited is because we only see him in certain roles. That is called being typecast. Being typecast is not a bad thing if it means you are getting lead roles. John Wayne was typecast. John Wayne also has an international airport named after him.

I like handsome faces and Sung Hoon is one of them, and I love his white hair look at Faith the most. He does look a bit stiff but good script will help.