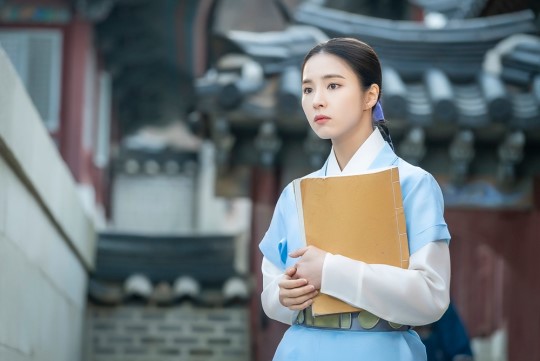 For a time, I feel like we had nothing but fusion sageuks for a good long while, but the traditional sageuk made a nice comeback this year. Which is why I’m interested to see whether that trend will be broken by MBC’s Rookie Historian Gu Hae-ryung, which stars Shin Se-kyung (Black Knight) in the titular role as a spunky, gender-role-breaking scholar. Cha Eun-woo (My ID Is Gangnam Beauty), Lee Ji-hoon (Your House Helper), and Park Ki-woong (Return) round out the main cast.

The sageuk romance has released several stills of Shin Se-kyung’s character, who definitely is not your average Joseon female lead as the kingdom’s first ever female royal historian. The troublemaker spent her formative years abroad in the Qing dynasty, where her intense curiosity was always satisfied by the diverse range of experiences available in China. However, upon her return to Joseon, she is confronted by the patriarchal neo-Confucian social system, which prompts her to take and pass the civil service exams. Of course, she passes the exams and enters the palace as a royal historian. 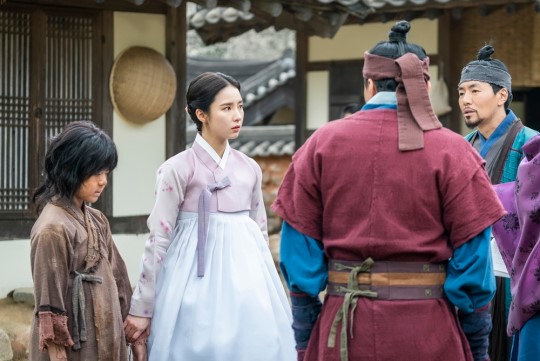 At the palace, she’ll meet and fall in love with Cha Eun-woo’s Prince Rim (notably not the Crown Prince), who is described as having never escaped “solo” status all his life. I’m curious to see how he first handles the fiery young female historian who can’t turn a blind eye to the unfortunate and will fight to change the destiny imposed on her by the world. I generally find Cha Eun-woo really, really green, but I recently checked out his web drama Sweet Revenge, and his portrayal of a fictionalized version of himself has done a lot to endear me to him, surprisingly.

Kang Il-soo and Han Hyu-hee will be co-directing Gu Hae-ryung, and I’m happy to see that their last collaboration together was the well-received Solomon’s Perjury. Writer Kim Ho-soo is more of a question mark, with no credits to his name that I can find. Hopefully, this writer-director trio is a successful one for this sageuk romance, since I’m in the mood for a cute fusion historical. 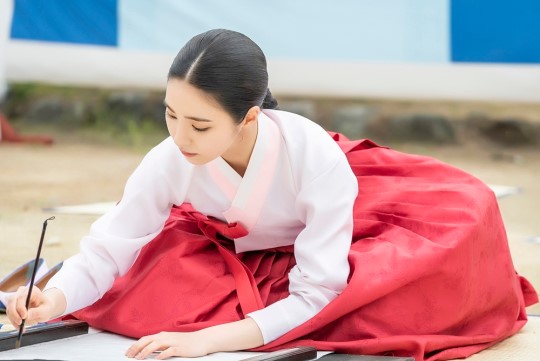 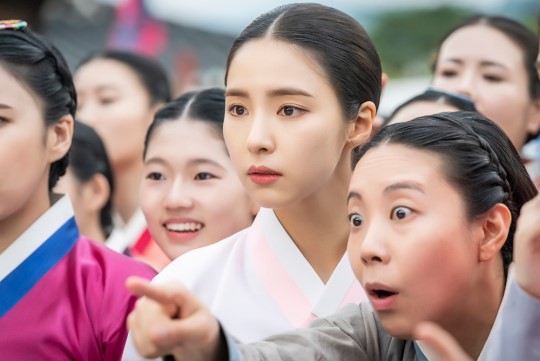 "I generally find Cha Eun-woo really, really green"
What does "green" mean? I have seen a few people describe actors this way

Probably an actor without too much experience

But then if they continue to show no improvement they just deserve to be called bad. Lol.

That's exactly what it alludes to and where it comes from yeahp.

Looking forward to seeing Eunwoo in a hanbok! I've liked Sekyung's saeguk work before, and I'm in the mood for a more lighthearted story, so this seems like a good combo. Hope it'll be on Viki or Netflix for me to watch.

As a die-hard Aroha (ASTRO fan) I can't help but laugh at the extreme responses Cha Eunwoo generates with his acting. But I have to admit his ingenuity at his choice of roles. By choosing male leads in female centric dramas he is killing 2 birds with one stone:
1. He is building a favourable image for his predominantly female fanbase.
2. He is slowly developing his craft while letting his female lead to take the more heavy duty emotional load which works in his favor as he gets to be the good looking furniture.
I believe many popular actors would reject this role as it does not allow much room for expression.

That was precisely why I found MIIGB so refreshing, lol. I had just gone through several dramas where the story turned towards the male lead halfway through, leaving the female lead as nothing but the love interest. So Kyung Seok literally being just the love interest - and his family story being about his mom moreso than him - was exactly what endeared me to him and Eunwoo so much, haha.

Anyway, I definitely think he has potential as an actor and I totally agree with your assessment on his lead roles so far.

Korea frakking loves him so he'll be fine.

Good looking furniture~ lmao
I'm not really a fan of SSK but I do curious how Cha Eun Woo will fare in sageuk tbh. But that gif of him in traditional garb while on phone is just... very apt of his nickname~ So, I safely can say that I'll at least watch the first 4 eps...
But juggling with Moonbin and Eun Woo's dramas though.. I hope I have enough time XD

Hopefully, the romance won't take too much of the airtime. It sounds like a nice set up for a strong woman who change history. Looking forward to it since I miss Shin Sekyung so much!

i uh, wasn't a huge fan of cha eun woo. until i saw my ID is a gangnam beauty and that all changed, haha. excited for this one!

Terrible terrible miscast of Cha Eun-woo........is the drama really asking us to believe that a prince with his looks is having trouble escaping solo status?

They should at least TRY to be historically accurate, right?

😂 I am simply just asking for a slightly more appropriate level for our suspension of disbelief!

In this Disney fairytale sageuk? Nah.

They're not trying to be- it's not really the point of this drama. It's billed as a fantasy/romance.

Well, apparently all idols have this problem......if we're to believe them.

But now so curious who would you cast in the role?

I am stumped by your question, @bcampbell1662! Because in Dramaland the lead actors are all so
good looking! 😅

Probably they are using 'he has too many suitors' angle?
or everyone finds him too pretty so they avoid him?
hahaha

I have never felt as sorry for pretty people as I am now until you brought up these possibilities, @hanie! 😆

lmao
well...suspension of belief needs to starts from somewhere.... XD

🤣 AND to get away from the demanding palace life he decides to escape to the country side and pretends to be a gisaeng as his cover.

Oh wait, that’s another fantasy sageuk with another face genius actor in Dramaland!

Nice. As an aspiring historian myself I approve of this story (and meeting a handsome prince).

I was shocked too - I've only seen this guy doing super elite stuff. To think he's now playing a supporting character to Cha Eun-woo. 😅

I also had no idea he would be in this drama.

He is going to play Yi Rim's older brother, the Crown Prince, and he is described the supportive older brother who is also idealistic when it comes to politics. I just hope he doesn't turn evil and doesn't compete for Goo Hae-ryung's affections.

i've only seen cha eun woo in id is gangnam which is a very uh special? show. his character was pretty uneventful and useless tbqh so it's not like i got to see what he has. hopefully he'll be decent.

that being said, it's whatevr since i'm watching it for this woman and her story.

It will get high ratings in Korea just cos of Eun Woo, I'm calling it now lol

Wow, the visuals of this OTP. I hope Shin Se Kyung's character is spunky and quirky (I do like her a lot in Bride of Habaek), otherwise she is just bland (6 Flying Dragons, Blademan, Black Knight). Nevertheless, looking forward to this just to appease my eyes. 😂

Yeah, I don't know about acting, but they are certainly eye candy. I remember Lee Se-young said she was bothered when Cha Eun-woo appeared with her in The Best Hit because he was prettier than the female lead. (But I think Shin Se-kyung is his level in pretti-ness). lol

not sure about the romance because quite frankly found Eun Woo bland in Gangnam ID but liked him in 'the best hit'. I've liked Shin Se kyung in her spunky roles and thinks she looks gorgeous in a hanbok. if it gets good reviews i might tune in later

"I generally find Cha Eun-woo really, really green, but I recently checked out his web drama Sweet Revenge, and his portrayal of a fictionalized version of himself has done a lot to endear me to him, surprisingly."

I had the same impression of him in Top Management, in which he plays an idol-actor who is famous for his bad acting (no kidding). Actually he was very funny in that drama and, to be honest, more interesting as a character than the (geeeeeenius) male lead

Maybe he is good at playing characters with that kind of self-derision?

Shin sekyung in a sageuk just feels right, lol. Curious to see how she does in one not penned by kim young hyun+park sang yun. I did love solomon's perjury, so I'll be curious to see how the writer does sageuk.
I really liked cha eunwoo after seeing him in the best hit(and like OP, surprisingly likable in his webdrama roles), so I'm cautiously optimistic.

I agree on SSK in sageuks. She fits well and we will know if it's the writer and the director who get the best of her or if sageuks are really where she belongs.

I've only seen Cha Eunwoo in ID: Gangnam Beauty and he was, too put it nicely, a piece of wood. He made the drama drag for me by his unbelievably boring 'acting' (let's be honest, that wasn't acting so much as standing their blankly and reciting some lines). And sadly, I don't find him attractive, so I didn't even have eye candy to distract me 😢

My mom did say he was good in another drama, so hopefully that's what translates to this drama, and not his poor acting in ID: Gangnam Beauty. I do like fusion sageuks so really do hope he improves.

Hmm, i like Cha Eun Woo and think he has potentials, especially when paired with a more experienced cast member, I believe he can absorb well. But Shin Se Kyung is not exactly counted as “experienced” in my dictionary. She also needs to be paired with more veteran actors. I hope they do well together. I mean, sometimes if the chemistry is strong, it’s likely that i’ll forget all the “green-ness” in their acting

It also seems like their stories (or Eunwoo's, at least) are indeed tied to more experienced actors like Park Ki Woong and Sung Ji Ru. So like you said, as long as they have chemistry (and the story is more comedic) then I don't think either will have a problem.