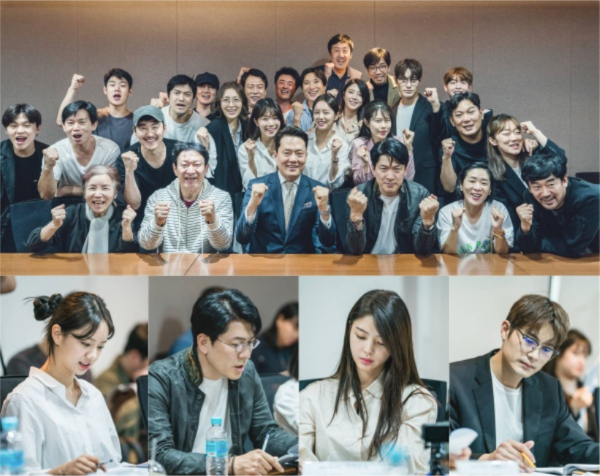 Well, this certainly doesn’t sound like your average workplace drama. Stills of the first script read for tvN’s Miss Lee has recently been released, with the cast and crew getting together for the first time. Pictured are leads Hyeri (Two Cops), Kim Sang-kyung (The Crowned Clown), Eom Hyun-kyung (Hide and Seek), and Cha Seo-won (What’s Wrong Mr. Poong-sang), in addition to an impressive lineup of veterans including Kim Eung-soo (Lovely Horribly), Baek Ji-won (The Fiery Priest), and Kim Hyung-mook (The Fiery Priest), among others.

The show takes place at a small- to medium-sized company crippled with debt and on the brink of collapse, which sounds quite bleak for a human comedy. Somehow, a young woman, the titular Miss Lee and played by Hyeri, becomes this company’s CEO. This newly appointed CEO definitely does not have the requisite experience or resume credentials to lead a company out of the red zone, but hopefully, she’ll have some help from Kim Sang-kyung’s character, a prickly and pragmatic manager at the company. His stern demeanor will likely provide a stark contrast to Hyeri’s character, who sounds endlessly optimistic despite the heavy burden on her young shoulders. 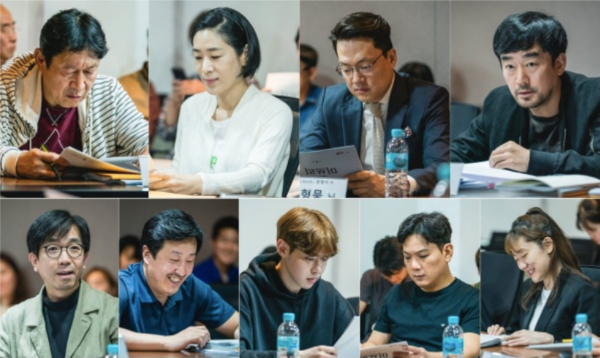 Eom Hyun-kyung will play a beautiful and ambitious team leader at the company. Her wily character is an influential figure within the company, and she becomes pivotal to the abrupt and dramatic change to Hyeri’s life. Cha Seo-won, in contrast, will play a seemingly aloof employee, who actually has a strong sense of right and wrong and a burning anger when he encounters injustice. I’m sure he’ll be a valuable asset to Hyeri and the company, both of whom will need as much help as they can get.

Directing is Han Dong-hwa, whose credits interestingly include OCN’s Police Unit 38 and Bad Guys: City of Evil. Writing will be Park Jung-hwa, who is returning to dramaland for the first time in 8 years, her last show being Channel A’s Heaven’s Garden. I’m not sure what to expect from this writer, but I really enjoyed Police Unit 38, so I’m hoping that Miss Lee will deliver the laughs, despite its somewhat depressing setting.

Miss Lee is slated to premiere sometime in September, following When the Devil Calls Your Name.

After reading the description, this drama sounds like a corporation version of 60 Days with the entity in danger, the inexperienced newbie who gets forced into the spotlight and supporting characters that somewhat mimic the secretaries we have at the Blue House. Was the old CEO killed by some hitman or something like a bomb?

I'm not sure whether Hyeri is up to the task or not (actually I'm not and that's probably why I won't be checking this out lol), but Kim Sang Kyung did well aiding Yeo Jin Goo in Crowned Clown so I've no doubts he'll do well here as well.

The story sounds a little generic so far with the underdog tones placed together with the familiar company setting. Well, if the writing is great and this gets rave reviews from Beanies I might check it out, but for now it's a pass.

Please, Please, Please let there be no romance between the leads... My Ahjussi did it perfectly just please follow suit. Please.

This sounds like so much fun - and with Hyeri acting around some talented sunbaes, I think she could really shine in this role!

Yes! My Sung Deok-sun is here!

My heart couldn't take the downward spiral into bleak and more bleak in What’s Wrong Mr. Poong-sang, but at least I found Cha Seo-won!
Glad to see him in another drama so soon.