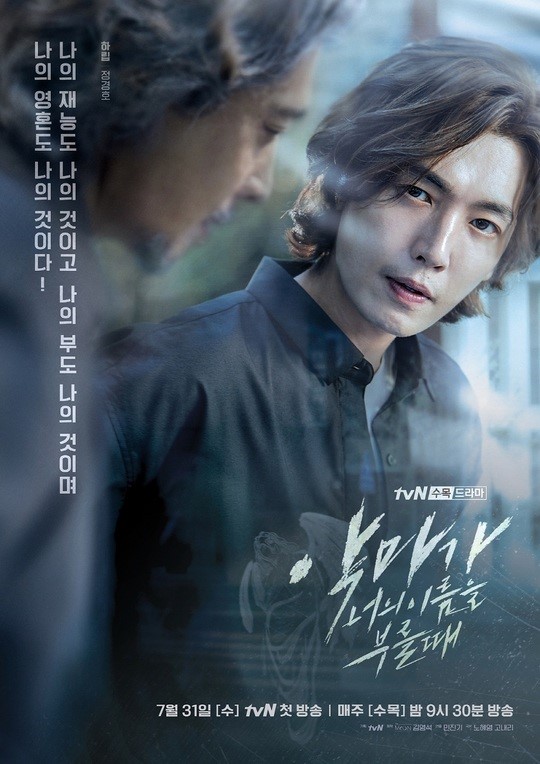 The fantasy comedy is centered around Jung Kyung-ho’s character, a star composer by the name of Ha Rib. The price he paid for his fame was steep– he literally sold off his soul in a deal with the devil. However, as the contract’s end date approaches, Ha Rib tries to re-negotiate the terms and starts a dangerous game in order to keep his life and soul. As the story unfolds, he discovers that his success was actually stolen. The devil had traded his life with the life of a talented young musician (played by Lee Seol). And as he tries to restore this musician’s life, as well as the lives of everyone around them, Ha Rib starts to learn life’s true value.

The newly released posters share a moody tone and give us a glimpse of each character’s personality. In Jung Kyung-ho’s poster, he looks at the camera defiantly. The caption reads, “My talent is mine, my wealth is mine, and my soul is mine as well!” 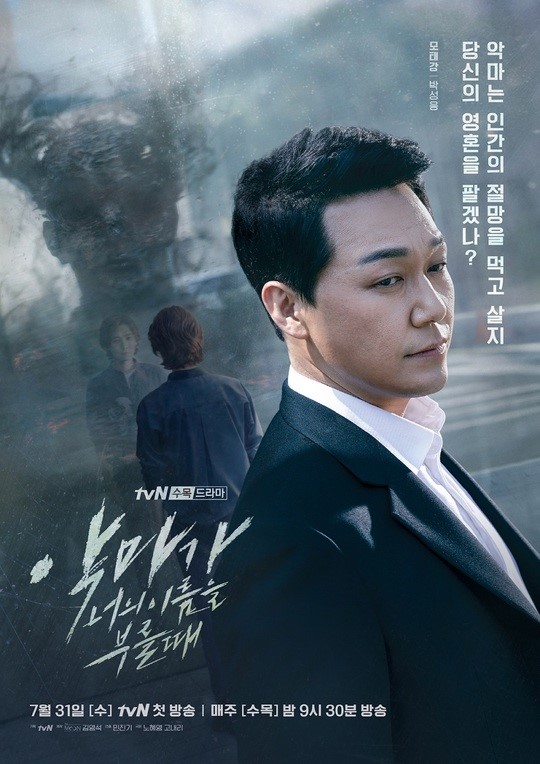 Park Sung-woong plays beloved top star Mo Tae-gang who appears to be a gentle and well-liked man. However, his body is possessed by the devil. He has a dark look on his face in his poster and behind him is a swirl of dark smoke that form a devil-like face. The caption on his poster reads, “The devil lives off of humankind’s suffering. Why would he sell your soul?” 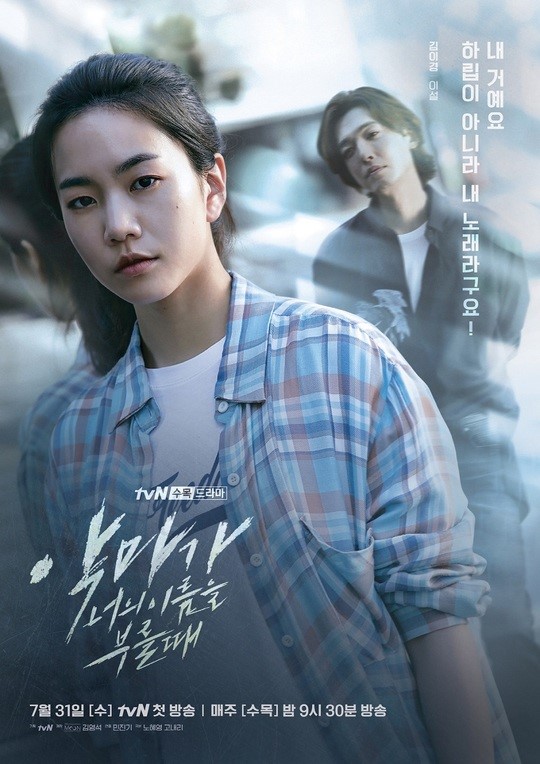 Lee Seol plays the role of singer-songwriter Kim Yi-kyung. She’s passionate about being a musician, but her life has been an endless stream of bad luck, what with her songs getting stolen by the devil and Ha Rib. However, one day Ha Rib appears in her life and they work together to make her music known to the world. In her poster, she stands quietly resolute and her caption reads, “They’re mine, I’m telling you they’re not Ha Rib’s songs, they’re my songs!” 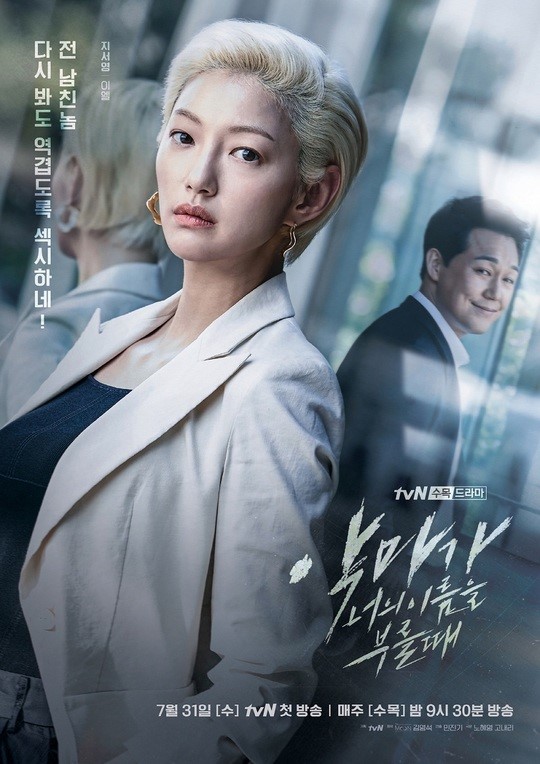 Lee El plays the character of Ji Seo-young, the woman who loves the devil. Years ago, she was previously in a relationship with Mo Tae-gang, and she never fully got over him. Described as chic and personable, she’s also one of the rare few who can handle dealing with the sensitive Ha Rib. In her character poster, she looks at the camera with an unreadable expression. And the caption says, “Ex-boyfriend, I hate to admit it but you still look sexy!”

Directing for tvN’s upcoming fantasy drama is PD Min Jin-ki (Circle) and writer Noh Hye-young (Come Back, Ajusshi) will be penning the scripts.

tvN’s When the Devil Calls Your Name is currently set to premiere at the end of July, on July 31.

I really hope this is good.

When I see it I think of the old story about Robert Johnson and then think about O, Brother Where Art Thou?

With every promo release I get more excited. I'm trying to temper my expectations, but I seem to be failing.

Please let Viki pick it up so I can watch it! In the meantime, I'll re-watch anything Jung Kyung ho.

Seriously waiting for this and Jung kyung ho marriage to Soo young , I am a fan of both, May the spirit of break up not separate them AMEN

i didnt know that was HIM omg nice

I love redemption arc stories and I am interested in seeing what looks like a separate arc for the devil himself. Should be interesting and is staffed by some really talented actors. I am ready for this one!

Oh and the first poster, he is not looking at his reflection. It looks like a different person or version of himself, older and gray with a goatee. I wonder what that means?

You just answered this inexplicable deja vu itch I had throughout this promo.

I wonder if Lee El writes it into all her contracts that she always has to be wearing unusual earrings?

Please be good and remain good. I love JKH and his acting but his choice in scripts is not always great. They usually start well but then go downhill. The writer's last work was somewhat the same too but at least delivered in the humor department. JKH's last 2 shows were great and the PD and posters are awesome so I'd hope for the best.

crossing my fingers, esp bc i loved the last thing they were both in. never heard of lee seol, she's beautiful

Jung Kyung Ho and Park Sung Woong reunion after Life on Mars and I love their bromance in that drama. Jung Kyung Ho always choose a good drama so I'm in and waiting for it to air. I watched all of Jung Kyung Ho's drama and movies and he is one underrated actor. Hope more people will see his dramas. First saw him acting in I'm sorry I love you with So JI Sub but really like him after watching Temptation of the Wolves and really became a fan and love him in Smile you which is my all time favorite family drama :D

While the rest of you are enthusiastic about JKH, let me just mention that Lee Seol was brilliant in Less Than Evil / Bad Detective. And she played a character who you wouldn't want to steal from, which colors my expectations for this show, likely in the wrong direction, but oh well.

And I can't think of selling-your-soul stories without thinking about a certain Douglas Adams book. Not gonna say which one because I don't want to spoil it for any of you who still haven't read every word he ever wrote :)

As much as I like JKH and PSW, the ladies are making even more excited. Lee Seol is a rookie to keep an eye on and this drama could bring her more exposure. Lee El looks stunning on this poster and I hope they will have a good amount of scenes together.

If Park Sung-woong is the devil and he calls my name then I'll gladly answer.

The posters look great and I am hoping this is going to be better than Come Back Mister (which I loved).

Love. Love. Love. Love. JKH’s hair in this. Jesus Christ. I know he’s sexy and I’ve been a fan of him ever since ‘Heartless City’ but man, he’s gorgeous here. Not gonna lie, even if I didn’t like the premise and the characters and the overall theme of the drama (which I do!) I would totally stay for his hair. 👀

I'm loving your enthusiasm for the hair( and for JKH). I feel the same.

The hair is everything. Everything. I’m literally staying for the hair.

I haven't yet to be disappointed by Park Sung Woong's choice of drama, and I'm glad to see Le Seol again, I loved her in Bad Detective, and Lee El is always good.

The casting is so strong! All of them are pretty charismatic!

I hope the OST will be great.

Why so their skin face is so white? I don't know if it's bb cream or photoshop effect.

oooh this sounds very interesting! i've def heard of this premise before but i dont recall any movie/drama executing it well

(sigh) Some of the most disappointing dramas (for me) had the best promotional posters. Add that to the fact that the title of this drama is about the best one I've seen lately. So I'm prepared for it not to be good. HOWEVER--I've found sometimes, when I'm not expecting much, a show will shock me and be unforgettably excellent. (Crossing my fingers for you, show.)

sounds so good! i cannot wait for this! i love jung kyung-ho and park sung-woong.

I miss Park Song Woong. Haven't seen him since ManXMan.