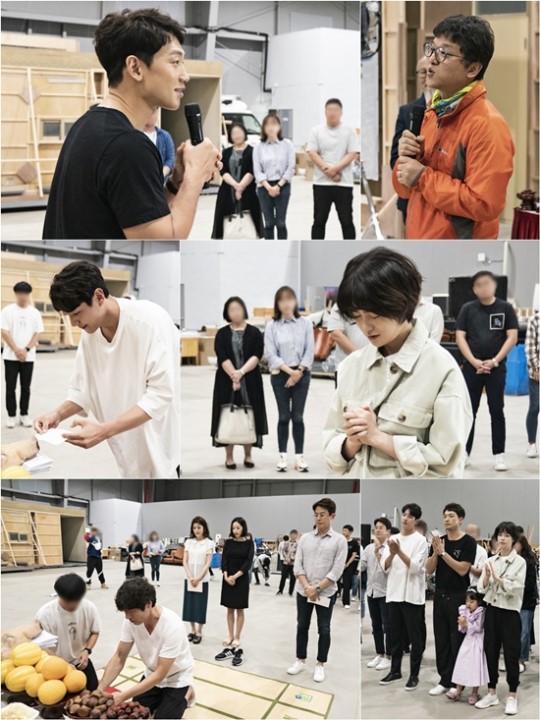 New photos have been released of the cast and crew of upcoming MBC drama Welcome 2 Life, who gathered together recently to hold a prayer ceremony and wish for the drama to have good fortune.

Starring Rain (Sketch), Im Ji-yeon (Blow Breeze), and Kwak Shi-yang (Chicago Typewriter), the story is a fantasy-comedy about a successful but self-involved lawyer who accidentally gets pulled into a parallel universe. The lawyer, played by Rain, gets a second chance at life in the new parallel world and changes course to become a principled and righteous prosecutor.

Together with the leads, supporting actors were also present at the ceremony, including Park Won-sang (Item), Jang So-yeon (The Secret Life of My Secretary), and Choi Philip (A Pledge to God) among others.

The production staff and cast members all wished for filming to continue smoothly, for everyone’s safety, and for the drama’s success.

The cast shared their gratitude, well wishes, and encouragement for everyone. And the director, PD Kim Geun-hong thanked the team by saying, “I will work hard so that everyone’s hard efforts will not go to waste. It is because of every one of you that we were able to get this far, and it is because of you that we can continue going forward.”

MBC’s new Monday-Tuesday drama Welcome 2 Life will be premiering next week, on July 29.

i'm so over him, but i guess i'll have to watch a few episodes at least to see if it's any good... i liked Rain better in comedy.

I don't know why, but I find Rain bland, kind of boring. I really don't know, I have only watched him in Full House, but I guess his character made me feel totally frustrated there.
On the other hand, why is dramaland not tired of using so much lawyers and prosecutors, politicians (mostly corrupted) judges, police officers and serial killers/kidnappers in dramas?? 😩😩😩😩😩😩😩

I don't know... In a year there are about 100-130 kdrama produced. I'm gonna use data from 2018, there were 120 drama being released that year, from my note 18 of them using prosecutor, judges and detective as their lead/second lead characters. It's about 15 percent from total drama from 2018 for the three profession you mentioned. They don't really dominate dramaland I think.

Ohhh, ok. Then I had a wrong impression. Maybe I have taken that idea from popular dramas. But it doesn't matter😅😅😅😂😂😂😂😂
For me it is a good thing, because then I am not tempted😂🎉🎊