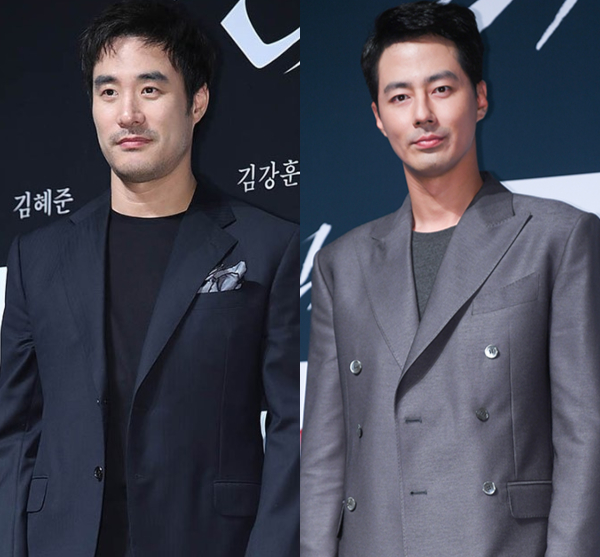 I find it really endearing whenever actors and writers or directors are known to collaborate repeatedly, because it shows a mutual respect that’s nice to see. Noh Hee-kyung is one of those writers known to frequently re-cast certain actors, and her newest project looks like it might be headed in that direction as well. Her latest show in the works, as yet untitled, has an offer out to Bae Sung-woo, who starred in Noh’s Live, and is reportedly reviewing the offer favorably.

It’s really a testament to Noh Hee-kyung’s star power that her show, which doesn’t even have a title yet, is gathering such buzz already. There’s not much in the way of plot details as of yet, but we do know that it will take center around an NGO and its humanitarian and rescue efforts. No doubt Noh Hee-kyung will infuse the show with a lot of thoughtful insight about life, work, etc. Hopefully, this show doesn’t reduce me to a blubbering mess like Dear My Friends did.

There were some early reports that also linked Jo In-sung (Dear My Friends, The Great Battle) to the project, but his agency has since refuted rumors that the actor had received an offer to star. There’s some hope yet for another possible reunion between the actor and the writer, since Jo In-sung responded to the reports by saying that since writer Noh is involved, he would definitely carefully consider any offer to join the show. If the two actors both signed up, it would be a three-way reunion, as well, since Bae Sung-woo and Jo In-sung starred in The King and The Great Battle together. The fact that they’re known to be close off-screen is just an added bonus. I will say that if Jo In-sung does join the show, my interest will definitely grow exponentially. Please return to dramaland!

The show doesn’t have a broadcaster yet, but let’s hope these casting reports indicate we’ll get some more information sooner rather than later.

Truly a win for me and only me

A non-gouvernmental organization I think.

I rewatched Live just a few weeks ago, so it's safe to say I AM EXCITED. Bae Sung-woo's portrayal of Oh Yang-chon has solidified him as one of my favourite characters.

Watching it a second time definitely reaffirmed that - it's just so raw, and powerful, and rich!

omg how r u not sobbing constantly lmao im so scared to rewatch but *_* the evolution of the family rly hit me hard. also i am so grateful about jung yumi's storyline since i think writers tend to avoid having main characters be victims of egregious crimes bc it ~taints them~~~~

I WAS sobbing constantly! 😆

And yes, the social issues like Noh Hee-kyung touched on were hugely refreshing to watch, especially on regards to sexual assault. The scene where Yang-chon was explaining to his daughter that her boyfriend who tried to force himself on her was not by any means a "nice guy" was very welcome.

Thanks for this great casting news about Bae Sung-woo, @tipsymocha! He was absolutely terrific in LIVE.

I love Noh and her earlier dramas more for some reason.
I hope she'll have a drama with Kim Myung-min again in the future.

@kiara,
I forgot that Bae Sung-woo appeared in the excellent sageuk CONSPIRACY IN THE COURT (2007). Along with LIVE he has appeared in 2 Class A dramas. I am not familiar with his other work. I will keep an eye out for future developments.

That's right :). How can I forget him in CONSPIRACY?
He is in a lot of movies. I'm glad he is getting more recognition that he deserves.

It's going to be a drama with a theme that I can relate to. I will probably check it.

i did not like most of IOIL and i don't feel a straight affinity for jo in sung but i know he and bae sung woo are friends! however i love LIVE so much, i could talk about it all day, and i love her writing and i think that all the life she injects into the story and the social issues is done so well. she's definitely a pioneer.

LIVE made me adore bae sung woo. a whole show about cops that i loved surprised me the most but she did THAT. i wonder who the ladies will be! i hope if it's about an NGO it's thoughtful (but it's her so im sure.)

man i could tlak abt that cop show all day. i can't wait for this!

Woah thankfully i found someone who didn't like IOIL that much. It has a great fan following but NHK's other shows have been way better in my opinion. It was good but not as great but still I dropped it halfway through so I can't justify my reason. Otoh, NHK is my favourite writer but surprisingly, I have only finished one of her short dramas, only because 16 hours of crying and seeing the harsh and emotional reality is way too much for me. She wrotes her shows so well, I start them all but end up leaving soon because they are too real, too good.

i think the show being on a basic (sbs) channel maybe did it. it had a lot of things that i feel didn't support her beliefs (the storyline between the adult/high schooler and the consent issues)

which short dramas have you watched?

i don't blame you. i don't think i can rewatch live but i kept up with it because the ending is so visceral and it felt so good. but it's definitely not a binge-able show imo. 2 a week was ENOUGH

Missed JIS in a drama! BSW was awesome in Live! And Writer-nim! Yes, I’m excited 😆

I yelped with excitement! Please let this come to fruition!! Jo In Sung aka the Prince of K-dramas imo coming back and with his good friend Bae Sungwoo, along with Noh's stellar writing is a must. Also Bae reminds me of Lee Je Hoon's older brother lol, which is a good thing I think he's quite charming!

Plus the NGO plot line is interesting too since Noh and Jo do a lot of mission work/charity work together, there have been pap pics of them giving back at disaster reliefs areas. Both seem to be actively into helping others less fortunate, so it's no shocker that he'll do anything she pens.

i knew about noh since noh does a lot of social work outside of writing...but i didn't know that about jo in sung! cool

"I was worried about children’s faces if they look depressed or dark, but I’m glad they look brighter than I thought,” Jo In Sung warmly said.

Furthermore, writer Noh Hee Kyung added,” Without the help of relief organizations, the refugee community would have been a disaster. I felt how important it is to continuously support and care.”

Yeah he and her are good friends and they do volunteer work from time to time together. So I think it's great that her next work is going to based on this, would love to see him in a drama again. Swoons.

LIVE was soooo GOOD!! And it aired around the same time as "My Ajusshi" which made it an awesome time for KDramas. Does anybody know any good "melodramas" or "slice of life" shows airing right now?

The most recent one that finished was One Spring night. But none of currently airing ones are anywhere near Live or My Ahjusshi.

Thanks! Good to know :o)

I have to keep reminding myself to not being over excited about this news because the last thing I want to do is jinxing this drama. noo hee kyung is my favorite screenwriter and this news just makes me so happy. I need calming pill.

Wow..It would be great if Jung Woo-sung to be added into the mix! They're best friends anyways, and JWS has worked with Writer Noh in "Padam Padam." :)

@shindy @waadmay this would be the drama that would be just wonderful, I can say it without any worries!
She is my fav screen writers and both the actors are amazing!
I am so exciiittteddd!!