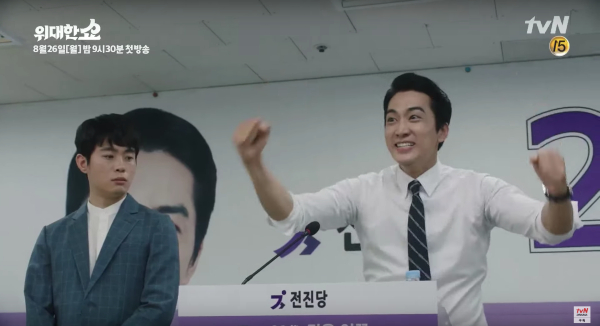 I never really thought much of Song Seung-heon (Player) until he started taking on comedic roles, which he’s been surprisingly good at. Which is why I’m glad to see him continuing his laugh-filled trend with his latest drama The Great Show, also starring Im Joo-hwan (Different Dreams) and Lee Sun-bin (Sketch). And if this newest teaser is any indication, we can look forward to several laughs at Song Seung-heon’s expense.

The teaser begins with shots of Song Seung-heon on the campaign trail. He’s a well-known figure for having become the youngest politician to hold a seat in the National Assembly, and things are looking good for his re-election campaign. There are volunteers and crowds sporting his color purple at street rallies and his campaign headquarters, but it all comes to nothing when his opponent wins his seat, leaving him and his purple-clad supporters dejected.

Song Seung-heon narrates that “when a politician loses an election, he’s not even a person.” Well, that’s a little bleak, but doesn’t seem like an understatement, when we see him looking despondent on his toilet, acting as a chauffeur, and throwing a fit in front of one of those claw machines. No glimpse yet of the four children who one day show up on his doorstep claiming to be his kids, but I do wonder whether one of his many faces of shock and horror are in reaction to this discovery.

The Great Show will air on tvN starting August 26. 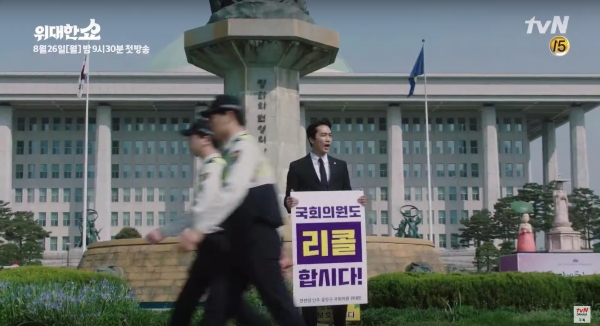 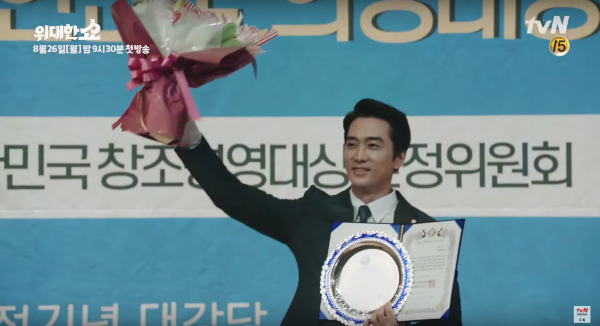 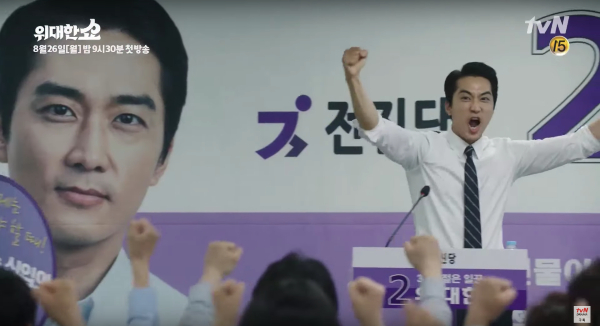 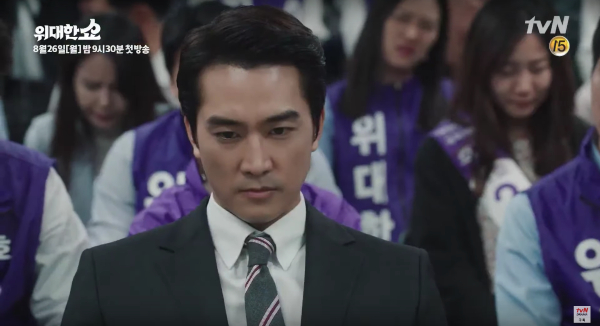 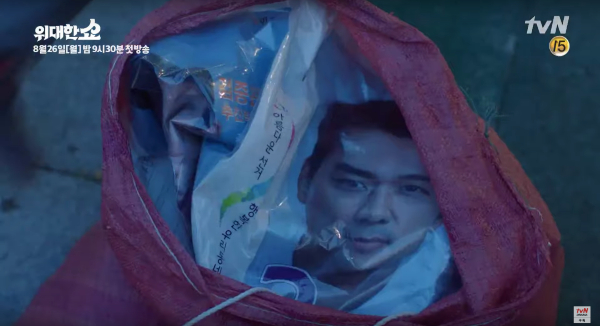 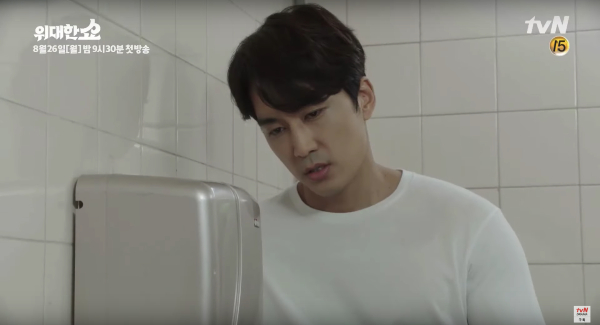 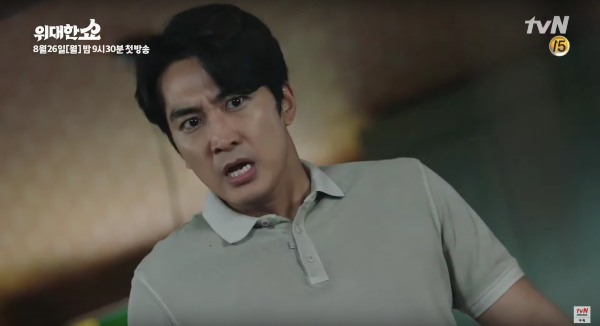 August 26? That is soon. This was not on my radar at all until the last post. I have to at least try it just to see where the four kids come from.

TVN changed their schedule. It was Catch the Ghost! that first scheduled after Designated Survivor: 60 Days.

Aw, I was looking forward to that! I guess it's been postponed.

The first order was DS 60D, Catch the Ghost! and The Great Show but they changed the order between the last 2.

The first time I watched a Song Seung-heon drama, it made me laugh a lot... and not in a good way (it was "When a Man Falls in Love"). But this trailer made me LOL IRL so I'm excited!

Exactly. I started to laugh for all the wrong reasons. When A Man Loves cracked me up.

Four children... Did he make sperm donation in the past?

All the four kids will have beautiful, long-lashed eyes curling at the tips. He has the most beautiful eyes.

I meant the eyelashes curling at the tips, not the eyes...though I'll bet he can do a good eye curl, since he does that eye-rolling thing of his so expertly.

Lol
You're pretty accurate in your description. I never really paid attention, for me his beauty forms a whole.

I just knew that someone would mention those gorgeous eyelashes. Thank you! The eyes have it. ;-)

I should be appearing in the next trailer soon as The Four Children. I will be carefully splitting myself into four parts. @pakalanapikake, @bbstl @wishfultoki @growingbeautifully @ndlessjoie I know you are anxiously waiting. Please, be patient.

😯😯😯😯 I have one anxious face for each character!

I've always known SSH is good at comedy ever since I watched My Princess. He used to be in the sitcom "Three Guys and Three Girls" with Shin Dong Yup.

I thought he was hilarious in Black. Comedy, including physical slapstick, seems to be his forte, especially when he's taking himself seriously while doing the most ridiculous things. I was thinking of checking this out when I started reading this, but you had me when you said "and then four children show up at his door". I'll have to watch the preview!

i don't mind the order change. i love SSH. but really, does anyone else have a few extra hours a week i can rent?!

Oh! I misinterpreted the title and thought the actor SSH has been changed for another actor 😅

Actually he's proven his comedic acting chops since his drama Black. Although the drama's genre was supposed to be fantasy thriller, you just have to laugh at his portrayal of a supernatural being trying to act human & adjusting to his new body. His comedic timing was excellent and he pulled off maintaining a deadpan expression while being extremely funny. I thought the multiple facets of his acting carried the whole drama through, despite that dismal ending which is to no faults of his, might I say.