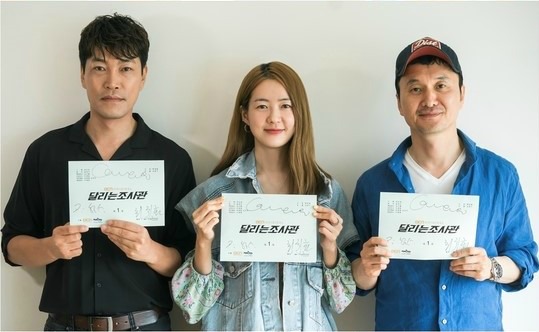 New photos have been released featuring the cast of OCN drama Running Investigators, who got together for the first script reading back in June. Along with the production team, actors Lee Yo-won (Different Dreams), Choi Gwi-hwa (Suits), Jang Hyun-sung (Angel’s Last Mission: Love, Doctor Prisoner), Oh Mi-hee (Fluttering Alert), and Oh Joo-woo (Let’s Eat 3) as well as other supporting cast were present.

The story is set within the Korean Human Rights Commission and follows the commission’s team of investigators as they look into the different cases involving human rights violations and the difficult decisions that arise because of them. However, rather than grand causes, the drama focuses on common, day-to-day, and relatable situations. The overall message of the drama being that everyone has the right to live with dignity.

On the human rights investigation team, Lee Yo-won plays the role of Han Yoon-seo – who is described as an ace investigator on the team, level-headed, and strictly by-the-books.

Countering her character is Choi Gwi-hwa who plays Bae Hong-tae. Coming from a prosecutor background, he shows a lot of empathy for people and believes in siding with the oppressed and weak.

Jang Hyun-sung plays the head of the team, Kim Hyun-seok. In the past, he had been passionate about his field. However, over the years, he got absorbed into the corporate culture and became desensitized to the cause.

Playing the human rights commissioner is Oh Mi-hee, whose character’s name is Ahn Kyung-sook. When making decisions, she shows cool logic and objectivity, but she is warm and personable when interacting with her fellow colleagues.

Directing for the drama will be done by PD Kim Yong-soo, and writing the script Baek Jung-chul.

OCN’s Running Investigators is currently being planned to premiere in September. It will be taking over the Wednesday-Thursday timeslot after Class of Lies concludes its run.

What a stellar cast. I’m excited to see what kind of chemistry they’ll create.
*adds to my list of anticipated shows*

Dear OCN and the whole team ~ I couldn't thank you enough for all these superb dramas you're giving us this year. Manse!

absolutely right up my alley and i ADORE lee yo won. even with such an atrocious dye job *____* really excited for this ensemble!

"everyone has the right to live with dignity"

Im Waiting for this🌹

Different Dreams was preproduced and has finished to film in april 2019. It had finished to air in july.
It was superb from the start to the end: i highly recommend it if you like Lee Yo Won. Her character Young Jin was a charismatic and had a spectacular storyline with a lot of strong and complex and relationships on all fronts: family, romance, friendship.
She also did a lot lof excellent actions scenes.

didn't know about this one "goes to make room on watching schedule paper that is so full~~~whats one more?!